I was woken up at first light by a duck fight – they continued for a while then stopped.  I went back to sleep and they started again and then stopped.  This went on until Richard decided to get up at 7am – quite why I don’t know as he hadn’t heard the ducks!

The locks were busy this morning but every boat we saw was a hire boat and the majority of them were Anglo Welsh.  The crews were all very nice and helpful – well except for the last boat who held back before the lock waiting and then started to move forward as I came out of the lock – there is always one! 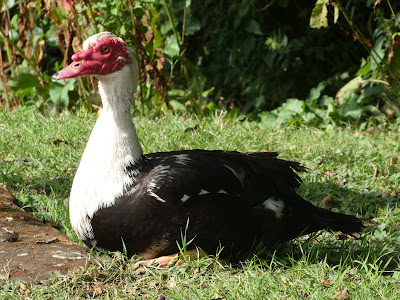 At one of the locks I saw a really ugly duck, I now know that it was a Muscovy duck.  These large ducks are native to Mexico, Central, and South America. Small wild and feral breeding populations have established themselves in the United States, particularly in Florida, Louisiana, and the lower Rio Grande Valley of Texas as well as in many other parts of North America, including southern Canada. Feral Muscovy ducks are found in New Zealand, Australia, and in parts of Europe (including the South Stratford Canal!)  They are large ducks, with the males about 76 cm long, and weighing up to 15 lb. Females are considerably smaller, and only grow to 6.6 lb, roughly half the males' size (so this one must have been male!)  The bird is predominantly black and white, with the back feathers being iridescent and glossy in males, while the females are drabber (always the way!) The amount of white on the neck and head is variable, as well as the bill, which can be yellow, pink, black, or any mixture of these. They may have white patches or bars on the wings, which become more noticeable during flight. Both sexes have pink or red wattles around the bill, those of the male being larger and more brightly coloured.
We moored just above Dick’s Lane Lock in a nice shady spot and had a restful afternoon.

Today, according to Water Explorer, we have moved from Ned’s Lock to Dick’s Lane Lock!  Of course, I couldn’t just let that go so had a look on good old Google.  Ned’s Lock and Cottage were named after Ned Taylor who lived there for most of his eight decades.  He was the 'lengthsman' and maintained the lock as well as the next stretch of canal. So, who was Dick?  I have no idea, but he had a lane named after him as well as a lock, a bridge and a canal wharf where vessels would have loaded and unloaded coal.

If you are a regular reader of the blog, you may remember about the Amazon parcel I was hoping to collect in Evesham.  In the end I asked Amazon to re-route the order to my sister’s house which they did, and it duly arrived so Muffin is now the proud owner of a cool jacket!  He wore it this morning but, of course, the weather is now going to cool down, so he probably won’t need it again! 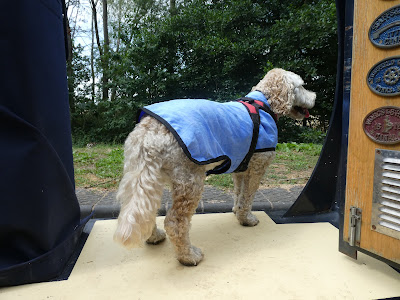 Posted by Linda Gifford-Hull at 12:33