We pulled pins about 10am and set off northwards – Great Hayward is our destination now.  This is the first year we haven’t had a real cruising plan and I have felt it quite strange.  I am a very organised person and always have lists on the go for various things so I like to plan our summer and work out routes and distances etc.  On our first night on Mary H back in July Richard and I sat and looked at the map – he wanted to do the Leicester Ring but I felt it was daft going north when I had to go down to Devon and James had to drive up from Southampton so I pointed to Tewkesbury for the hand-over and a plan was made though it didn’t quite work as Richard and James were supposed to have gone up the Severn, Worcester and Birmingham and North Stratford but Richard chickened out at the thought of Tardebigge!  Once I was back on the boat we still didn’t have a plan though we did think about going home via the River Soar and the Leicester Line, but I was rather worried about the water levels.  We knew that Steve and Diane were on their way so decided to wait for them and now we are heading to Great Hayward to catch up with Deck of Cards with Phil and Gill who now have a permanent mooring there.  We haven’t done the Fradley to Great Hayward part of the Trent and Mersey for some time so why not!!

We stopped just above Glascote top lock to go to the Co-op and Steve and Diane came onboard for coffee before heading off towards Birmingham while we had some lunch.

There was a real mix up when we got to the top lock.  The water point is on the lock waiting and there were two boats on it.  Richard went to investigate and came back and explained that we were next in the lock as the two boats were taking on water.  I went down and helped the boat coming up the lock but when I turned round one of the boats on the waterpoint pulled out and made for the lock – I thought I must have misheard Richard.  The boat came into the lock and a man appeared from down below and came over to me to apologise for his wife taking our lock!  He then, in no uncertain terms, told his wife off – not once but about three times! As we approached Fazeley Junction the errant boat was tied up and the woman came up and apologised to Richard!  Honestly just one sorry would have sufficed!!

There was a group of girls on two boats waiting for the locks – they were Girl Guides and away for 12 days.  They did the locks for us and became Muffin’s best friends!
At Fazeley Junction we continued up the Coventry Canal looking for the services, but they appear to have vanished.  That means no toilet or rubbish emptying until Great Hayward! 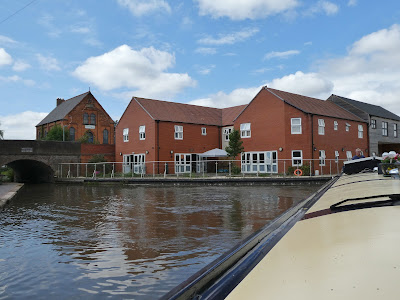 We pulled over at Tamhorn Park Bridge.  We appear to be just across the canal from the military firing ranges for nearby Whittington Barracks.  It would appear that there was firing today from 7.30am to 5.00pm. but we didn’t hear anything thank goodness, as Muffin is terrified of loud bangs – his mother was a gun dog, but he obviously doesn’t take after her!

I had noticed that the bridges along this part of the Coventry Canal have names not numbers.  We saw this on the Birmingham and Fazeley Canal and delving into the depths of the internet I have discovered that the 5½ mile stretch which extends northwards beyond Fazeley Junction to Whittington was built by the Birmingham and Fazeley Canal Company, although it was built on the route authorised by the Coventry Canal's 1768 Act of Parliament, 17 years later it was still nowhere near completion so the Trent & Mersey and the Birmingham & Fazeley canal companies jointly built the canal between Fazeley and Fradley – the two met at Wittington Brook.  Bridge 77 is at Fazeley Junction and 78 is at Whittington but there are 16 bridges between them all with names.  This section is now regarded as being part of the Coventry Canal.  This is a plaque which shows where the two canal companies came together (sorry about the photo quality). 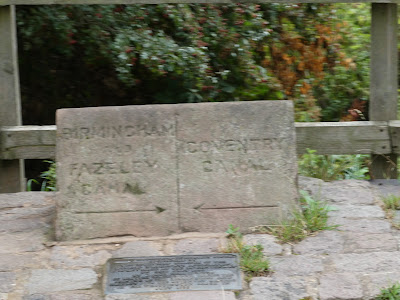 Posted by Linda Gifford-Hull at 10:58