We had a really rough night.  It goes back to earlier yesterday when Muffin appeared from the bedroom licking his chops!  The rubbish bag was in the cratch and the doors were open, but he hadn’t torn the bag, so we thought it was OK.  However, while I was waiting at Glascote top lock he was sick, and it was full of nasty looking things including broken chicken bones.  I cleared up the sick and thought no more about it.  About 1am he woke me up by whining and wanted to go out, so I let him off the boat.  This was repeated at 5am and 7am.  Richard came up with an explanation.  We had had spicy chicken legs in our BBQ and the box was at the top of the rubbish bag and he thinks that Muffin had licked the box and the spicy sauce had upset his tummy!  He is absolutely fine this morning though appears to be very tired – like me!!
It had rained hard through the night though it hadn’t started by my 1am sleep interruption but it had by 5am.  It was a 2½ hour cruise to Fradley Junction which seemed to go on for ever.

We pulled over before the swing bridge at Fradley Junction to fill with water and Richard walked round to the services to do the emptying.  I took the boat out into the junction and, boy, it was windy.  Going up the middle lock and Shade House lock was, to say the least, interesting but I did it without too much bashing of the boat!  There was a volockie at Wood End Lock who was checking names along with registration and licence numbers I’ve never been asked for our licence number before.  We pulled over just before Tuppenhurst Bridge – that was enough for today.
We passed Huddlesford Junction where the Wyrley and Essington Canal joined the Coventry Canal.  It was built to transport coal from coal mines in Wyrley and Essington to Wolverhampton, with a branch to Birchills, near Walsall. With construction only just started, they applied for a second Act of Parliament, which resulted in the main line to Wyrley becoming a branch, and the branch to Birthchills being extended to collieries at Brownhills, and then descended through 30 locks, passing Lichfield to reach Huddlesford Junction. The Wyrley and Essington Canal, including the junction, opened on 8 May 1797, but traffic was a little intermittent at first, as the locked section was often short of water. This was compounded by the failure of the reservoir at Sneyd in the summer of 1799 but was resolved once the reservoir at Cannock Chase was completed in 1800. The Wyrley and Essington Canal became disused to the east of Ogley Junction and was abandoned in 1954.  Restoration works have been underway since 1990, spearheaded by the Lichfield and Hatherton Canals Restoration Trust who have been actively engaged in excavating and rebuilding sections of the canal. The canal is now called the Lichfield Canal and the Trust aims to have the restoration completed by 2026. Currently only a small section from Huddlesford Junction to Cappers Lane Bridge is in use as moorings. 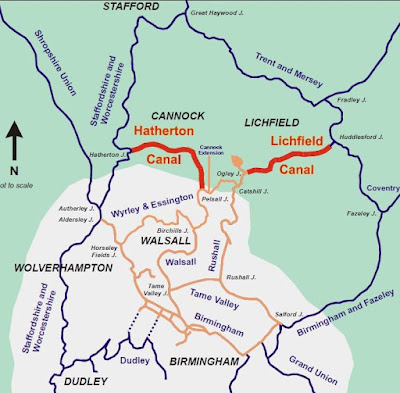