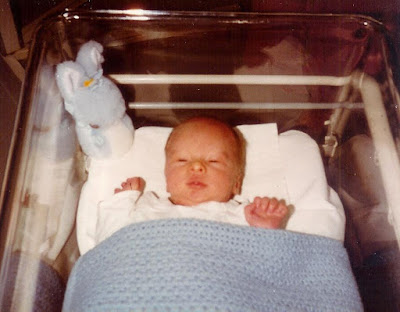 This is my baby today with his baby blowing out the candles on the cake that Laura and Tobyn made. 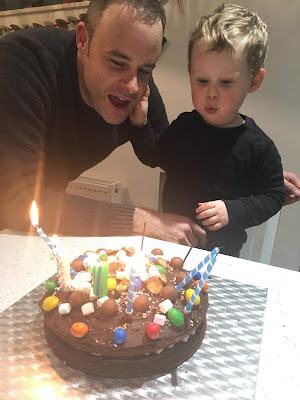 It was rather a windy night with the patio furniture moving around and waking me up, I felt as if I had been to an all night party when I woke up!

This was the forecast for today that I copied yesterday.  Those wind speeds are Force 8!  That was only in gusts fortunately, but they were strong.  Richard reckoned the wind was coming up from Africa as it was a very warm one. 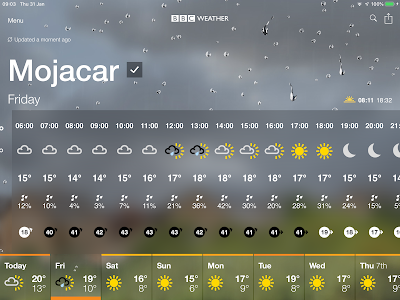 It was quite dull to start with a big bank of cloud over the sea however once the sun moved above the cloud it turned out to be a lovely day with no rain.
We needed to do some food shopping so took a trip up to the Parque to go to Consum.  It was lovely out and about as long as you didn’t look out to sea!

After lunch I took a nap as I was so tired then waited for a follow-up call from BT about my emails.  It was supposed to be at 3pm but it was 3.45pm before someone called.  The call said Falkirk, but the girl said she was in India!  Once again, she wasn’t able to help and has said that she will call back on Tuesday next week.  I’m sure she will call but whether she will be able to solve the problem is another thing.

I haven’t told you the latest news on Penny and Jim’s “escape to Mojacar”!  They decided that the only thing to do was get new passports.  So, on Wednesday afternoon she dashed down to the local Post Office and got the forms.  She managed to find passport photos for Jim but not for her, so she was at Tesco at 8.30am on Thursday getting them done.  A friend was able to sign them and then they drove up to Newport, South Wales, for an appointment at the Passport Office at 2.30pm – a round trip of 206 miles!  The drive back was awful with the sleet and snow, but they made it – she was exhausted!  Now they have to sit and wait for the passports to arrive, hopefully on Tuesday or Wednesday.  They can then rebook their flights which only operate on Sunday, Tuesday and Thursday.  So far there are seats on the relevant ones.  Oh yes – I forgot to say that the new passports, because they are Fast Track ones, are costing £284 instead of £170, so what was going to be a cheap holiday is turning out to be rather more than that!

I spent the afternoon cooking and ironing then we took Muffin down to the beach for some ball throwing.  The wind had dropped, and it was nice down there.  Muffin will bark when he wants us to throw the ball and it has to stop!  Some time ago I taught him that when I put my finger up it means “be quiet” and he remembered it – but he still gets over excited and barks.  Fortunately, I had my sandals on as the waves caught me on a number of occasions.  There are showers on the beach at each exit and I discovered that the shower at the entrance/exit we use is still switched on, so I was able to wash my feet. 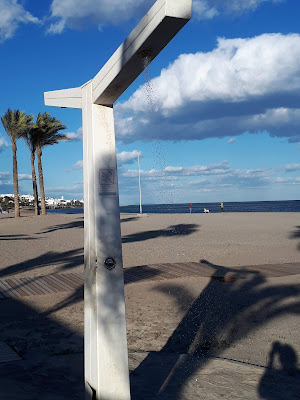 On our way back from the beach we saw that our nearest bar was open, and we haven’t frequented it yet.  Peaky Blinders is new this year, I think.  We just had two small beers – it’s bar and the owner seemed nice enough, but something is missing.

I bought an amaryllis bulb with me from the UK, it didn’t look too healthy and I was on the point of throwing it away then this morning I found this!  I’ll keep you updated on its growth! 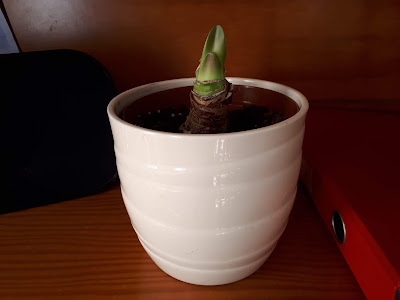 Sunday 3rd February
Another windy day but the sun never seems to mind and shines on!

We were going for Sunday lunch with Sue and Andy at Kukis and walked down passing the new building site.  Don’t you just love the name?  You have to say it rather than read it!

Apparently, the crane is operated by remote control from the ground.  I guess this done all over, but I’d never heard of it before. 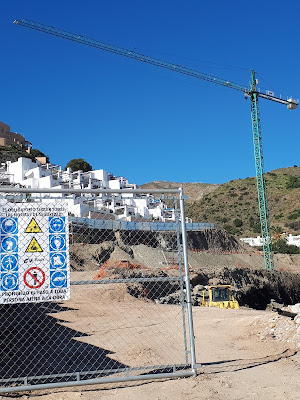 The noise from the site is pretty awful for those who live nearby, fortunately we are far enough away not to hear it, but we are suffering with a surfeit of dust which I guess comes from there on the wind.

Anyway, down to Kukis for our roast lunch. 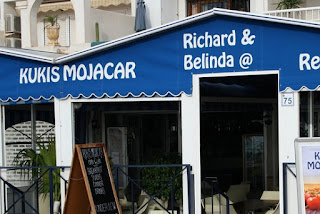 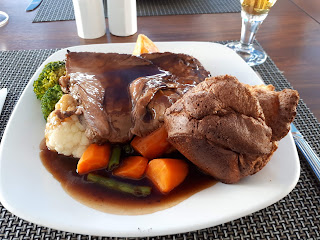 Which was followed by Baileys Cheesecake – I forgot to take a photo of it!

After lunch we went back to see Sue and Andy’s apartment.  If you look straight off the balcony, they have a lovely view of the beach and the sea but if you look slightly to your left you can see the building site.  They had no idea that the site was there until they arrived at the end of December – what a shock!  Still when it is finished, I’m sure it will be nicer than looking at a dirty great hole in the ground! 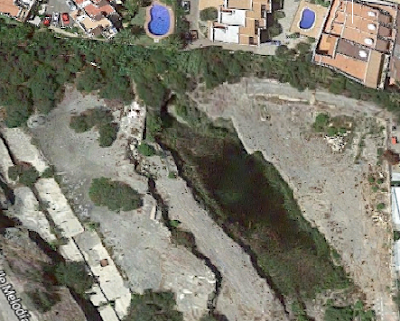 Monday 4th February
The wind is definitely dying down a bit and it was a lovely warm morning (19°c).

A quiet day today with household chores and some shopping.

As some of our days were busy and I had a lot to write, I’m not going to make things up today!