Tuesday 5th February
I was up early, well for me anyway, as I was expecting BT to phone about my emails.  It was supposed to be a 10am call which finally happened at 11.30am.  There is still a problem and they are going to ring me on Friday morning.  I’ve managed to put my BT emails on the iPad so, to be perfectly honest, I don’t mind about them not being on the laptop.

After lunch we went over to Vera to Iceland and also to investigate a Chinese shop next door that Sue had recommended.  There are a number of Chinese market type shops in Mojacar – we have one locally which seems to sell most things, but this one was a “WOW” when we went in.  It is huge – probably three times the size of our local one.  I was so taken aback that I forgot to take a photo – I will have to go back to take one!  It really is amazing what you didn’t know you needed!!
But the good news is that Penny and Jim received their passports today and have booked their flights 😊  They will arrive into Alicante on Thursday – one week later than planned.  We have said that we will go and pick them up as Penny is absolutely exhausted after all that she has been through in the last few days.

Wednesday 6th February
We’ve been here four weeks now and not really done much housework – just a cursory sweep through a couple of times and the bathroom done.  As we have visitors arriving tomorrow, we gave the place a spring-clean (well a sort of one!).  We are giving Penny and Jim our bedroom, so everything had to be moved from one room to another and the beds sorted.  Richard was in charge of the floors and I did the rest.  There isn’t a hoover as the floors aren’t carpeted but you can’t really get a broom into some places!  We finally got everything done after lunch.

There was shopping to be done and I wanted to go to Consum, so we decided to go up to Vera Playa to do the shopping and give Muffin a run on the beach there.  It was a lovely day, but I didn’t think there would be any nudists on the beach. WRONG, two men approached us, and I thought we were going to be told that a) Muffin shouldn’t be on the beach or b) that we shouldn’t be on the beach fully clothed but, no, they just walked past!!  Richard suggested that we leave as he was feeling a bit uncomfortable but that he might feel better if he hadn’t got his clothes on!!  (Yeah right!)

Shopping done we went back to the villa and relaxed.  We were both pretty exhausted so went off to the Chinese for dinner.  It is only down the road, so we imbibed of the local wine, collected Muffin from the car and walked home.  Neither of us had a coat on but we didn’t feel cold at all. 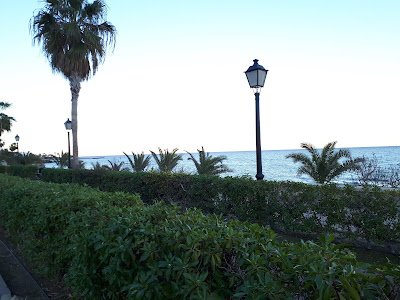 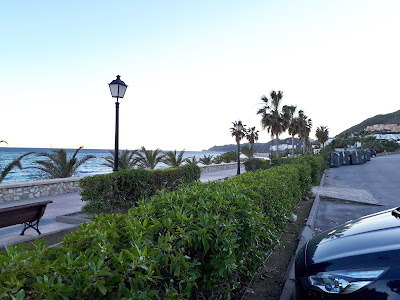 Thursday 7th February
An early start as we were heading up to Alicante Airport to meet Penny and Jim whose flight was due to arrive at 11.10am.  It is a good 2 hours drive but we set off with plenty of time.  However, before we even reached the motorway our Google lady (I can use Google Maps on the car’s satnav) told us that there was a 10 minute delay which gradually moved to a 23 minute delay.  I was following P & J’s flight and there were due to arrive early.  Penny had said that she was so looking forward to seeing our smiling faces as they came out through customs and I was worried we wouldn’t be there.  In fact, in the end, we were early (the incident causing the delay was cleared) and the flight was late, so they did see our three smiling faces – dogs are allowed in Spanish airports.

Back at home we had a late lunch and then Penny unpacked.  It was then a quiet afternoon followed by an enormous homemade lasagne!

Friday 8th February
Friday is Turre market, so we toddled off up to Turre.  We have been really lucky with parking there this year and we just as lucky today.  We stopped at the first stall and suddenly Muffin jumped up at someone – it was Sue along with Andy and Roly.  That’s twice now that Muffin has seen them before we have!  Bev wasn’t with them as she has had a really rotten cold – Roly said that she had been in bed for 4 days!

We wandered through the market with Penny stopping at every clothes stall!  In the end we only bought a fur neck warmer each!  We had a coffee and then continued our shopping at the fruit and veg stall. 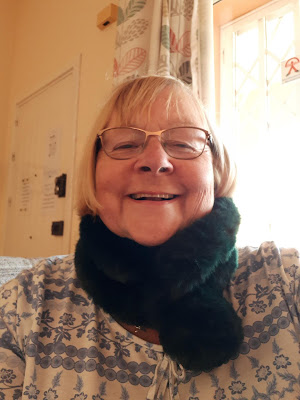 We decided to have our main meal at lunchtime so went to La Cabaña where Penny and Jim sat facing the sea and we all had a lovely lunch.  It was about 3.30pm when we got home and we just sat and relaxed, chatting, reading or playing games on iPads 😊

None of us needed anything else to eat so a nice easy evening.

Posted by Linda Gifford-Hull at 10:34