We had an early start as we had to take Penny and Jim up to Alicante Airport.  We had a very journey up with everyone, apart from Richard who was driving, catching up some shut eye.  Richard and I had planned on going into the terminal with Penny and Jim to have a coffee but there was a drop off lane outside the terminal which meant we didn’t need to use the car park, so we said a quick goodbye and we went our way and they went theirs.  We have had a lovely time with them and look forward to them joining us again next year – hopefully for a little longer.

I had spotted a service area not far from the airport, so we pulled in there to have a cup of coffee.  As we were leaving Richard handed me the car keys and suggested that I drive!  I actually enjoyed the drive back, but it was motorway style roads all the way.

We decided to go for a late lunch and went down to Bar Luz or the Chicken Shack to partake of some of their lovely chicken.  It really is delicious.

While we were down that way, we thought that we would have a look in Blue Sea Villas to see if they had the perfect apartment/villa for next year.  The lady took our details and said that she would email me something over later on – we didn’t get anything!

I forgot to write about some wildlife we saw on our trip up the mountains last week.  At one point a wild boar, complete with tusks, leapt out of the bushes onto the road and then dived back in again – Richard, who as the driver in a right hand drive car was sitting by the side of the road, didn’t even see him!!  Next it was a snake slithering his way down the oncoming side of the road – Richard did see that one.  Lastly it was a large lizard/geko sunning himself beside the road.  I’m not sure if he was a lizard or a geko, and even looking up some information still don’t really know.  Lizards are reptiles of the order Squamata, normally possessing four legs, external ear openings and movable eyelids. Geckos are small to average sized lizards belonging to the family Gekkonidae which are found in warm climates throughout the world.  Whatever he was I hope he and the other two are still alive as I think they all had a death wish!

Apparently the first photo is a Geko and the second is a Lizard – they look the same to me! 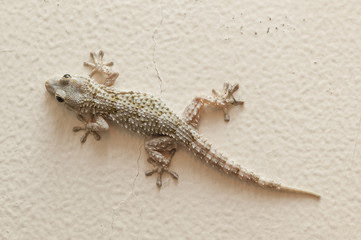 We had a quiet day except for doing the washing, I had our guests’ sheets and towels to wash and had even changed our bed so there was masses to do but things just don’t take long to dry out here.

We took Muffin onto the beach late afternoon along with the ball thrower.  Why do dogs chase balls?????

Posted by Linda Gifford-Hull at 14:33