Sunday 17th February
A quiet day as we had been out and about so much.  I caught up with some of the blog while the others read or slept.

It was quite windy, but we took Muffin for a walk on the beach in the afternoon and I tried to get some photos of the waves breaking over the man made reef.  I was rather pleased with the outcome. 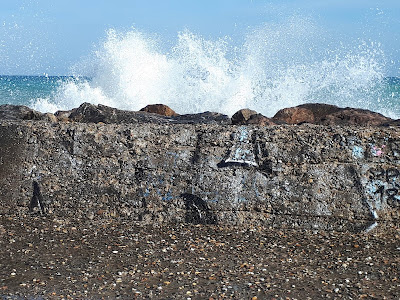 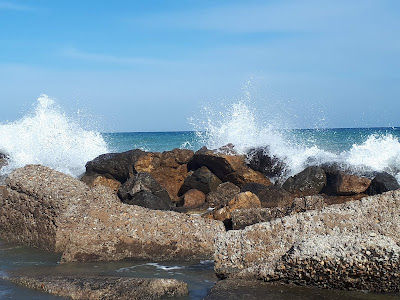 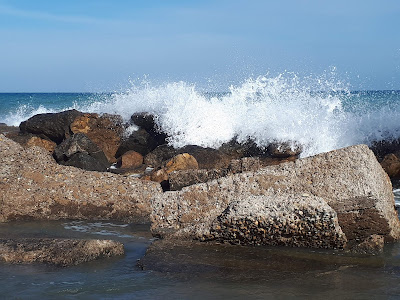 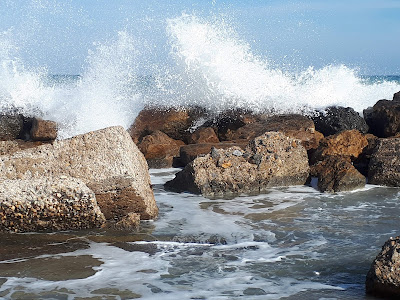 I also took this photo of Penny and Jim. 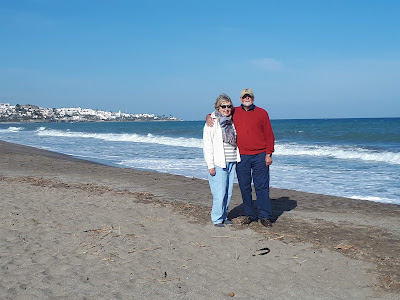 In the evening we went to Torre Bahia for Penny and Jim’s last dinner out.  We would have gone on Monday, as that is their last night, but Torre Bahia is closed on Mondays.  Once again it was a lovely meal.

Monday 18th February
The last day for Penny and Jim.  Penny spent her day packing and sorting while I got completely up to date with the blog.  Just to get some exercise Penny and I went to Mercadona and the Euro Market!

At present Mojacar is plagued with the Pine Processionary (Thaumetopoea pityocampa), a moth of the Thaumetopoeidae family. It is one of the most destructive species to pines and cedars in Central Asia, North Africa and the countries of southern Europe. The urticating (irritating) hairs of the caterpillar larvae cause harmful reactions in humans and other mammals. The species is notable for the behaviour of its caterpillars, which overwinter in tent-like nests high in pine trees, and which proceed through the woods in nose-to-tail columns, protected by their severely irritating hairs. 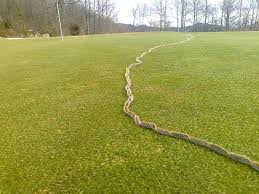 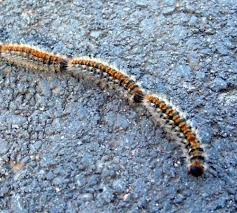 The adult moths lay their eggs near the tops of pine trees. A single female can lay up to 300 tiny eggs and it takes around a month for them to hatch.  After hatching, the larva eat pine needles while progressing through five stages of development. In order to maintain beneficial living conditions, silken nests are built over the winter. Around the beginning of April, the caterpillars leave the nests in the procession for which the species is known. They burrow underground and emerge at the end of summer. High numbers of adults are produced in years with a warm spring. 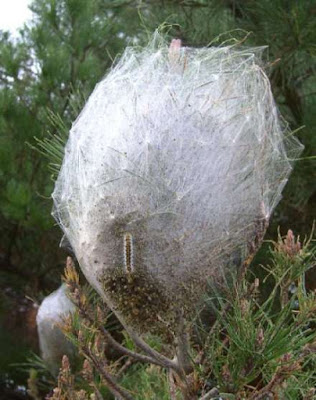 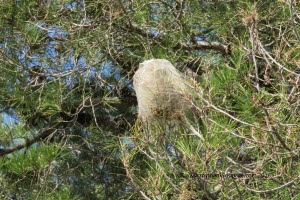 Processionary Caterpillars are covered in about 62,000 of the Urticating hairs.  These contain a highly irritating protein that can cause severe allergic reactions. In the latter larvae stage of development these hairs can be ejected or shed. Even when not attached to a caterpillar, these hairs can still cause incredibly nasty stings.  If a human comes into contact with a caterpillar or their hairs, it can cause a nasty allergic reaction, including a rash, asthma attacks and vomiting. Dogs are at risk, too, though their symptoms may include a swollen, discoloured tongue or muzzle.

The caterpillars usually hatch in February and March here in Mojacar and really are lethal to dogs.  At present Muffin is having to be taken to the beach by car as there is a pine tree on the road we take, and the caterpillars are now hatching.  I have bought a can of hair spray to put on any procession of caterpillars as that will stop them in their tracks.

Posted by Linda Gifford-Hull at 09:29