We took Penny and Jim up to Mojacar Pueblo today.  It was sunny but a bit chilly up there.  The Pueblo is 152 metres – 500 feet for people who, like me, still think in imperial!  Penny did the round of the gift shops and managed to get what she wanted.  We had lunch, fortunately inside, at a small café with a good view.  We then did the obligatory walk round though I took a wrong turning and ended up at a much nicer viewpoint than I had hoped to find! 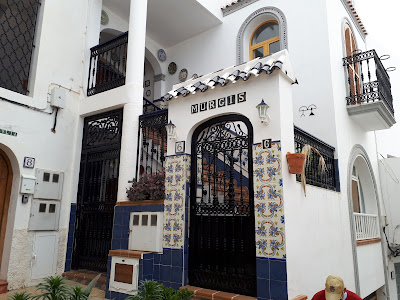 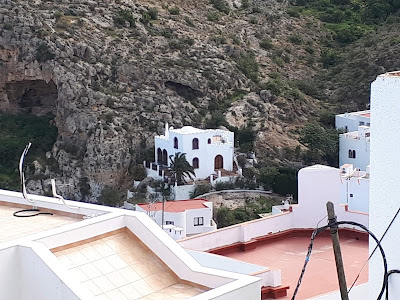 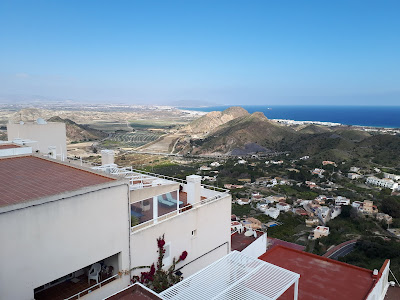 Jim, as an electrician by trade, was horrified by this wiring!! 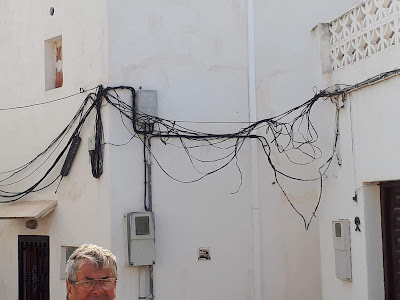 I was a bit worried about Jim with all the hills but when we got to these steps, I was even more worried!  However, he managed them very well – largely thanks to Penny, I think! 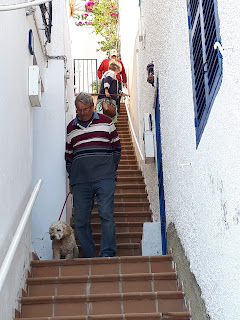 From the Pueblo we drove up to Garrucha and along the Paseo Joaquin Garriques.  We had only ever been as far as the fish market car park but found some lovely restaurants/bars near the marina.  We will be back!  We found a Mercadona and, as I wanted bread, I popped in.  It is huge!  In fact, it is so big that there was a lady on a sit on vacuum cleaner driving around!

Tonight was paella night!  I had bought a large paella pan two years ago and, though Victoria cooked a paella in it while she was staying with us, it has lived in the loft ever since!  I had bought prawns, a frozen paella fish selection and had some cooked chicken left over so it all went in.  It was my first attempt and, though I say it myself, it was pretty amazing!  Liz and Phil came round to join us and a good night was had by all 😊 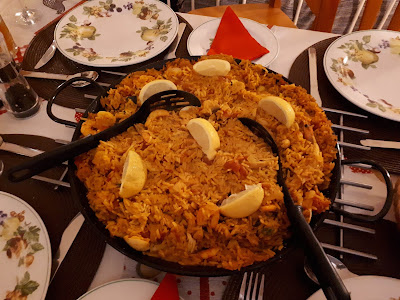 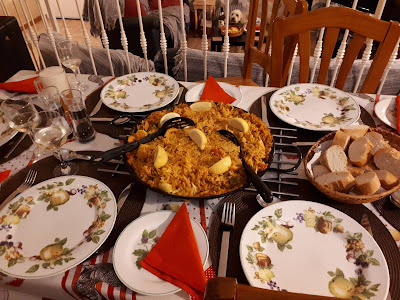 Today was Carboneras and south.  I had found a list of viewpoints local to Mojacar so we tried to find some of them.  The first one was La Granatilla which is on the coast road to Carboneras.  I’m sure we have stopped there before however it was so windy there it was quite hard to stand up! 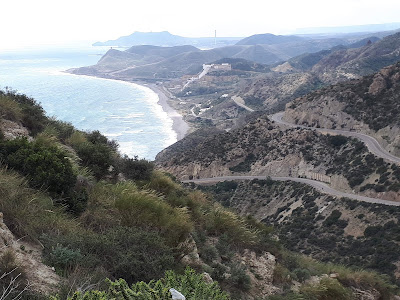 We had a wander round Carboneras and stopped at Café Moreno for hot chocolate. It was that rich, thick stuff which was gorgeous!  I took the next two photos inside the café. 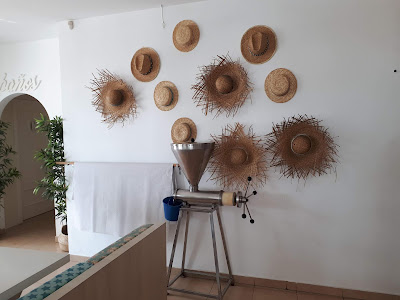 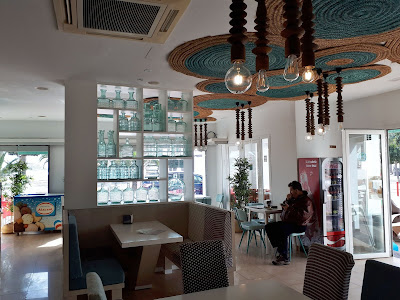 The next three photos were taken on our walk. 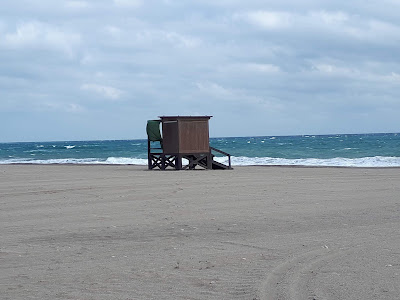 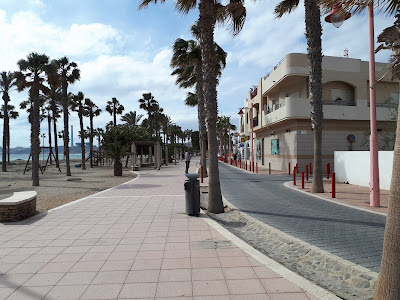 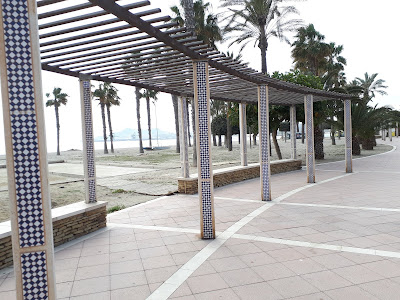 The next viewpoint was Beach of the Dead!  However, it is a short walk to the actual viewpoint, and we weren’t too sure if we would make it before being blown over, so we moved on.

We wanted to find somewhere nice to have our picnic but ended up at the back of a motorway service area – quite a difference from our picnic on Monday where we were up the mountains.

To get to the next viewpoint we drove through miles of plastic greenhouses.  Some were in good condition but a lot of them were torn and there was a lot of plastic littered about. 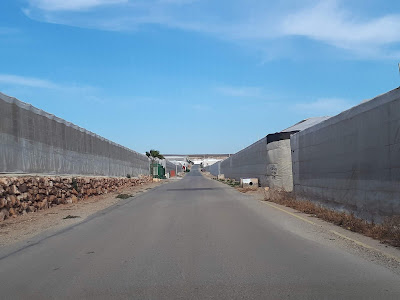 The next viewpoint was Mirador de Las Selinas which is down near Cabo de Gata where there are salt flats. These produce some 40,000 tons of salt annually, but their ecological value is much greater as it is the habitat of lot of animal and plant species.  The origin of the saltworks can be traced back to the Phoenician or Carthaginian period. The area is about 400 hectares of floodplains.  The water supply runs through a complex system of canals taking advantage of the difference in level with the sea, and through numerous rivers which run parallel to the sea. 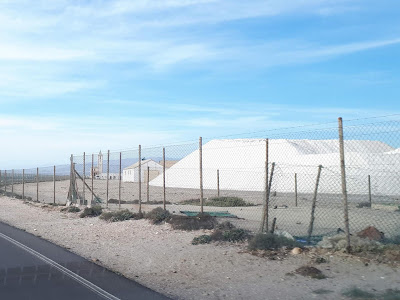 The Mirador de Las Salinas is, in fact, a viewing area over an area of water near to the salt flats.  They say that flamingos live there but we didn’t see any.

The next three photos were taken on our way up to third viewpoint, Viewpoint of the Reef of the Sirens.  I think some of these lose something in translation! 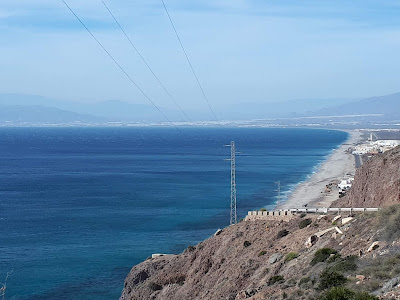 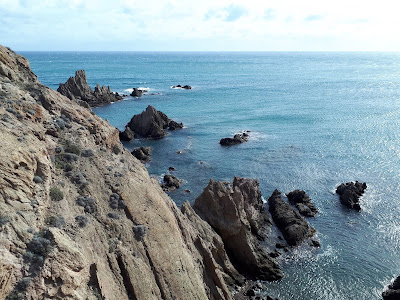 The lighthouse at Cabo de Gata is quite modern.  It is on a rock 50 metres high and with a tower height of 18 metres.  The light is visible 30 miles away and is supplemented by an acoustic siren for fog. The lighthouse was built to warn navigators of the dangerous Cabo Laja reef which is a mile away and has caused numerous shipwrecks throughout history. 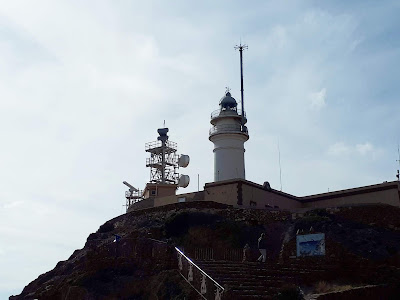 The map showed a “white” road along the coast.  Some white roads are OK, but some are no more than tracks.  Having said this we set off along the “white” road which was a proper road with a few potholes which became more frequent and deeper!  Richard negotiated his way but sadly the road petered out, so we had to turn around and work our way back round and through the potholes! 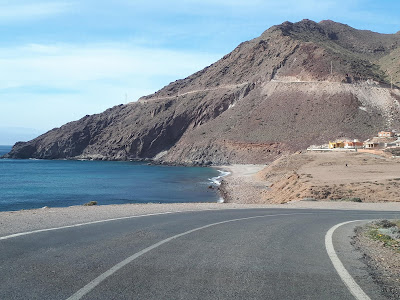 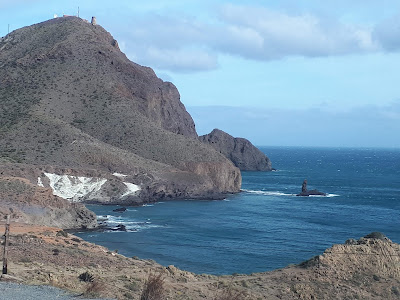 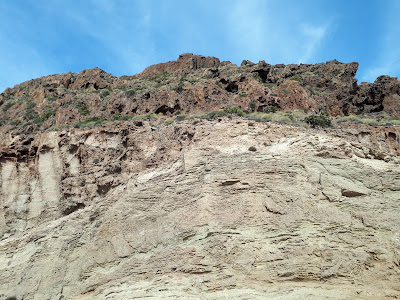 I love this photo.  There must have been a fire here at some point as all the telegraph poles were burnt but this one had actually burnt through and was suspended! 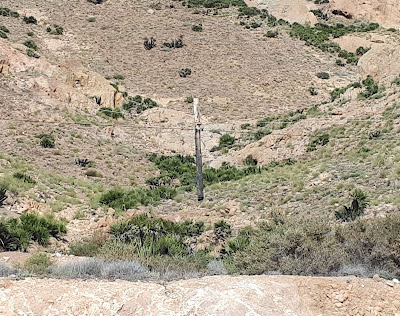 This church, The Church of Las Salinas de Cabo de Gata, was built for the salt workers in 1907 with it’s last service being held on Christmas Day 2004. 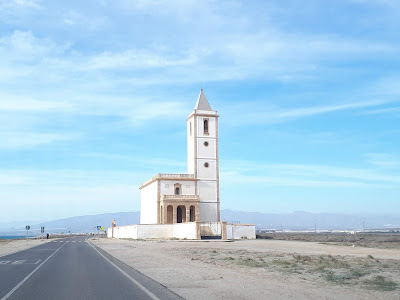 It was quite a long journey home (57 miles) with three of us nodding off from time to time – thank goodness the driver managed to keep awake.

Posted by Linda Gifford-Hull at 11:26