Wednesday 13th February
Today we had planned to go to Bedar and Garrucha for the evening fish market.

We did get to Bedar and went to the Restaurant Miramar for their famous slow cooked lamb.  Richard and I happened across the restaurant last year but didn’t know about the lamb until the people next to us had it and it looked amazing – we were sitting there with fish and chips or something similar!  The lamb really was gorgeous, and one shoulder was enough for two.  We will be going back! 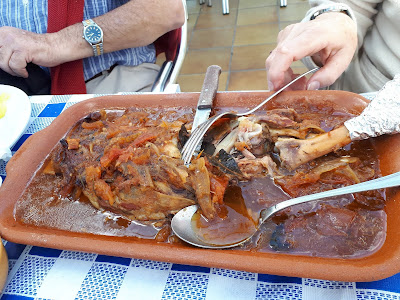 Because we had Muffin we had to sit on the terrace but the sides were down so we weren’t too cold but poor Muffin was shivering - the tiled floor must have been freezing!  Gallantly I took off my cardigan and put it over him!

This was the view through the plastic side. 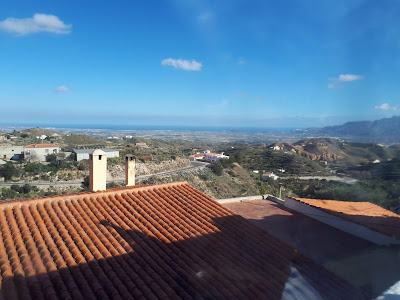 We needed to walk our lunch off so wandered round the village.  It is a wonderful little place with narrow streets and quirky cottages. 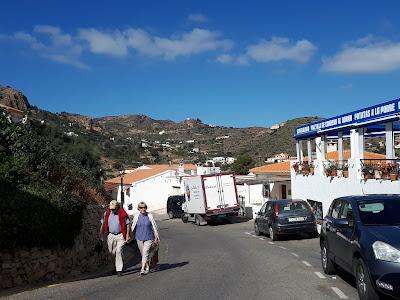 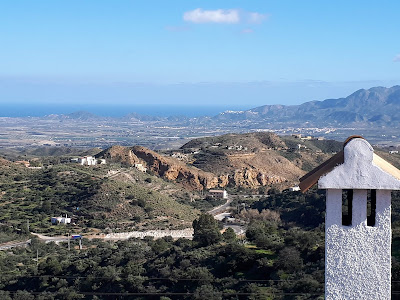 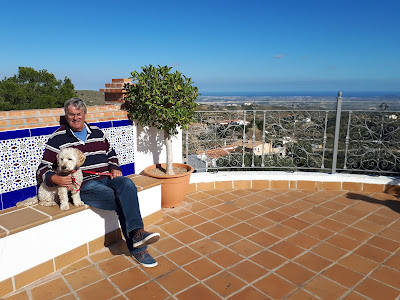 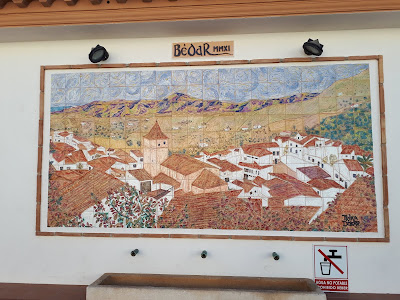 This is a very interesting sign!  The words translate as “no macho violence” but machista on it’s own translates as “male chauvinist”!  I have never seen anything quite like it before! 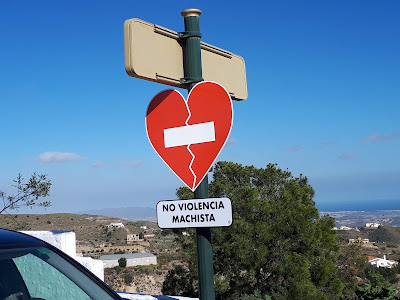 We were quite tired after a big lunch and a walk up and down the hills of Bedar that we decided against going to Garrucha so went back to the villa and relaxed – we have had quite a few busy days.

There were no Valentine cards in the shops when we left home in early January so for the first time in 10 years, we had a cardless Valentine’s day ☹

I had told Penny about the Chinese supermarket in Vera, so we took them up to see it.  I said after our last visit that I would take a photo and I actually remembered! 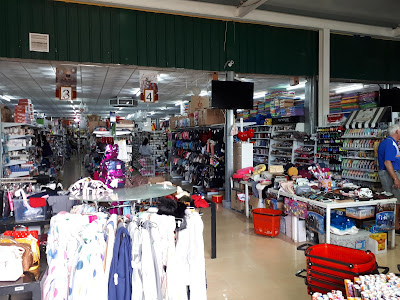 Of course no trip to Vera could be without a visit to Iceland!  I did want Lurpak but that was all.  The supermarkets do sell Lurpak but not the light version so it means a trip to Iceland to get it.

From Vera we went back down to the Playa and to the Parque Commercial for some tapas and a quick visit to Consum.

I had booked to go to the Irish Rover as they had a Valentine’s dinner with an Abba tribute band.  As the four of us like Abba it was a no brainer really!  Sadly, the evening didn’t start too well.  When I booked the table, I was asked if we wanted to sit on the terrace or inside.  I said that as we would have the dog with us, we would sit on the terrace.  When we arrived, we were told, very firmly, that dogs were not allowed on special evenings.  I tried to argue my case, but they weren’t having any of it!  In the end Richard said he would put Muffin back in the car and drive him around a bit then leave him – honestly sometimes that dog takes over our lives with his separation anxiety.  We cannot leave him at home but, usually, we can leave him in the car.

Anyway, back to the evening.  The service was SO slow - we finally got our main course at 9.30pm just as the band were starting.  It was a reduced menu and I chose country chicken which was slices of warm chicken with lukewarm gravy.  The started of pate and the desert of cheesecake were OK.  However, the tribute band were excellent and had most people up dancing.  I can’t quite decide if the entertainment made up for the poor meal and service. 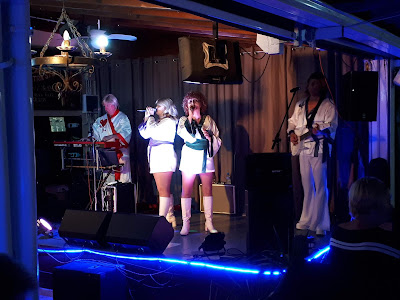 Posted by Linda Gifford-Hull at 07:52