Once again, my first job was to find a dentist!  The first one was open today – hurray!  I was asked to wait and I would be fitted in as an emergency.  I sent Richard away and sat down to wait – 30 minutes later I was called in!  The dentist, Dr. Alicia P. Jiménez-Pinzón Pineda, is a lovely lady who speaks very good English.  She did a temporary filling and said I should go and see my own dentist when I get home.  The cost - €60 which I felt was very good.

I thought I would walk the 3.3 kilometres back to the villa but I had to admit defeat after about a kilometre – my painful foot is still painful even after the visit by the podiatrist.  My knight in shining armour – well Richard in the car – came and rescued me.

We were having a quiet day but were going out for pizza at lunchtime.  I had suggested Levante again but discovered it was closed so we drove up to the Imperial Pizza where we sat on their terrace on the beach. 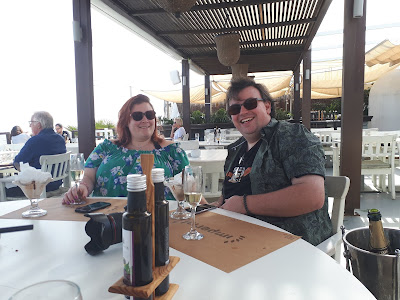 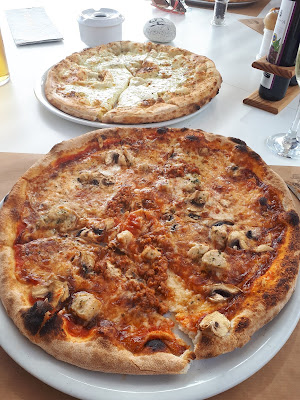 We decided that we would all have a drink or three and walk home – it was a lovely walk along the beach.

When we got back to the villa Victoria went for her swim and I JOINED her!!  It was cold at first, but I soon got used to it and really enjoyed it.

We woke up to an overcast and breezy day.  The weather forecast said that the wind speed would get up to about 50mph!

We drove to Carboneras – this is another place where, when Victoria visited it last time, the weather was a bit dire.  We walked to the square where Toria and James had a quick look in the castle while Richard and I sat with Laurence of Arabia and looked out to sea! 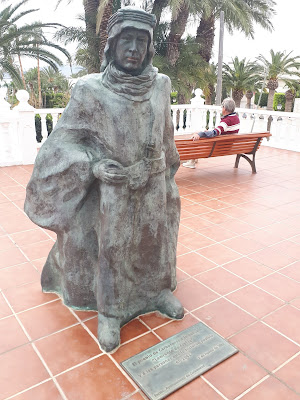 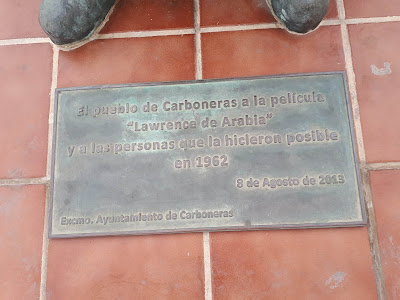 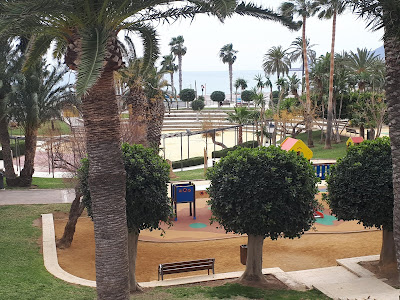 It would seem that Carboneras is very proud of its association with the film of Laurence of Arabia.  The town of' 'Aqaba' was built at Playa del Algarrobico and the attack on the train was filmed at Genovese Beach, San Jose.

The restaurant where we had hoped to get tapas was closed so we walked to another.  We sat down and gave our drinks order, but the waiter spoke no English and when we asked for tapas, he reeled off a load of “words” which we couldn’t understand.  In the end I asked for the menu but that didn’t have any tapas in, so we walked back to the car and ended up getting lunch in a café next to where we had parked.  We all had a hamburger which was literally made of ham!  None of us really liked it but Muffin enjoyed it for his dinner!

The wind really got up during the afternoon as we hunkered down.  I felt really sad for Toria and James – they only have 4 days with us and one of them is proving not to be very pleasant ☹

We were supposed to be going to El Punto this evening for dinner but, on checking, I found it was closed!  We had all debated about going as we still felt full from lunch so it was probably fortuitous!  So, we decided to stay in and watch a film.  We chose Bohemian Rhapsody as no one had seen it before.  It was a fantastic film – the guy who played Brian May looked so like him, but I couldn’t get on with the “Roger Daltry” as I kept seeing the actor in Eastenders!

Posted by Linda Gifford-Hull at 09:07