Victoria and James were leaving this morning, so we went up to Moca for a full English breakfast to keep them going for the rest of the day.

When we got back the travellers decided that they would leave to be better safe than sorry.  I hate it when visitors leave (well nearly always!!) and I felt very close to tears.  Muffin is very much a “pack” dog and sees Richard, me and Victoria as his pack at home and it was the same here.  He sat on the step waiting for them to come back for ages – it made me feel even sadder. 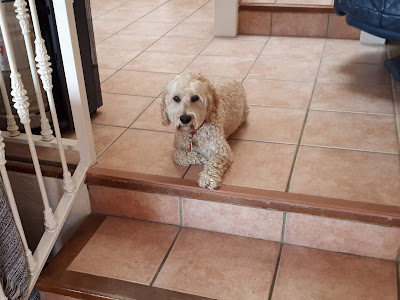 I felt sad all day – Victoria and I are very close, and I just felt as if part of me had gone too.

I had arranged to have my hair cut at 5pm and was a little worried as I have had the same hairdresser for 19 years and I wasn’t sure if the chap who was going to cut it would be OK!!  I was concerned all the way through the cut as he was doing it very differently to how Jane would do it, but it turned out just fine!  Jane had taken photos after my last cut with her and it looked almost the same.

A fabulous Mojacar day 😊  The sun was shining as Richard drew back the curtains and it stayed like that all day.  I spent the morning catching up on things and getting the washing done.

We met up with Liz and Phil for lunch at Imperial Pizza – again!  I thought I had chosen a pasta dish, but it was risotto but it absolutely gorgeous – I will definitely have it again.  Liz and Phil have been here for six months and have decided to stay indefinitely!  They were waiting for a call from Blue Sea Villas as to whether or not they could have a lovely villa they have seen.  The call didn’t come but I got a message later on to say that they can have the villa from April 1st 😊 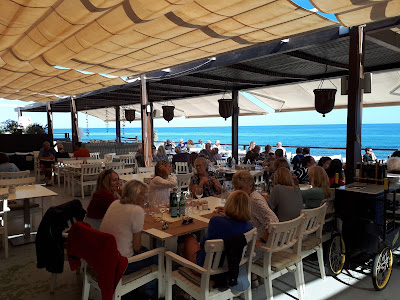 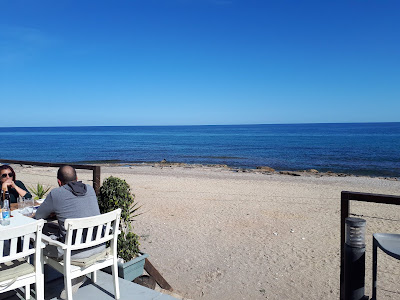 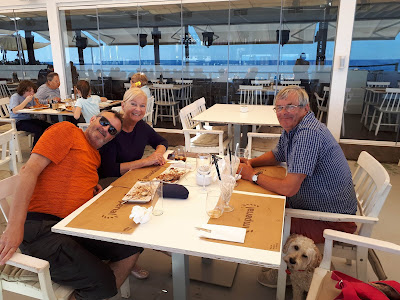 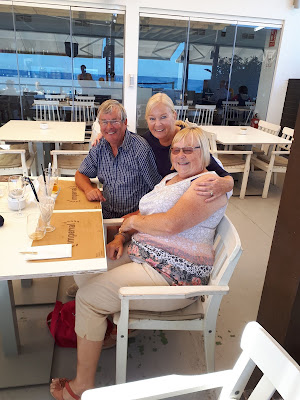 More visitors were arriving today, so it was another mad housework session.  Richard does a good job with the sweeping and then gets the mop out too!

Our visitors are Ingrid and Bob (from now on known as I & B!) our next doors neighbours at home and good friends.  They flew out last Saturday to Alicante and have been staying in a very luxurious hotel since.  Claravista 1 is no luxurious hotel!

My alstroemeria is amazing.  I really didn’t think it was going to do anything but once it started shooting I put it by a window which gets all the afternoon sun.  I am so pleased with it.  We have another two weeks here so, hopefully, it will see us out! 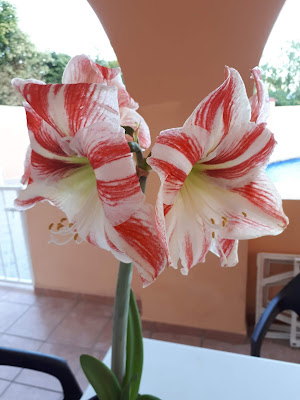 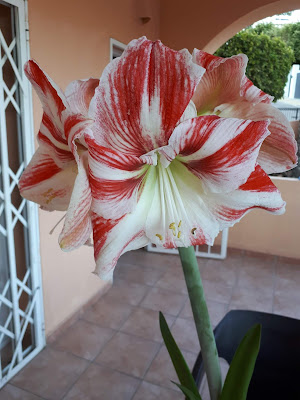 I & B arrived mid afternoon and we sat around the pool chatting and trying to decide what to do!  We were going shopping but that never happened!  In the end we decided to do nothing and go out for dinner.

We settled on the Palacio Imperial Marina (Chinese) which was OK but then Chinese food is Chinese food wherever you are.  Having said that I have been to China on four occasions and Chinese food there is nothing like we are used to!!

Posted by Linda Gifford-Hull at 09:21