We were told that it would take an hour to get from the Adriatic up to Kotor so as we were due to dock at 10am we reckoned we would need to be on deck at 9am to see the wonderful scenery as we sailed up the”fjord”.  They call it the most southerly fjord in Europe but in fact it is a submerged river canyon.

I had set the alarm for 8am but when Richard opened the curtains we were slowly cruising up the fjord!  It certainly was a magnificent sail in as the mountains went right down to the waters edge and there were little villages nestled between the mountain and the water.

We chose to have breakfast in the Snack Shack where the tables are in beach huts.  They don’t provide much but it was enough for us.  I had a small pot of muesli and one of homemade berry yogurt followed by a sausage in a roll.  More than enough really.  If we had gone to Islands we would have eaten a lot more which we really didn’t need!  We also heard that Islands was very full and people were struggling to find a table.

We watched as the Captain brought the ship alongside a fairly small quay which he did perfectly.  We were very lucky as we had been due to be at anchor and tender into the town but for some reason we were the ship that was alongside.  The P & O Oceana and the MSC Musica were also in port but they had to tender. 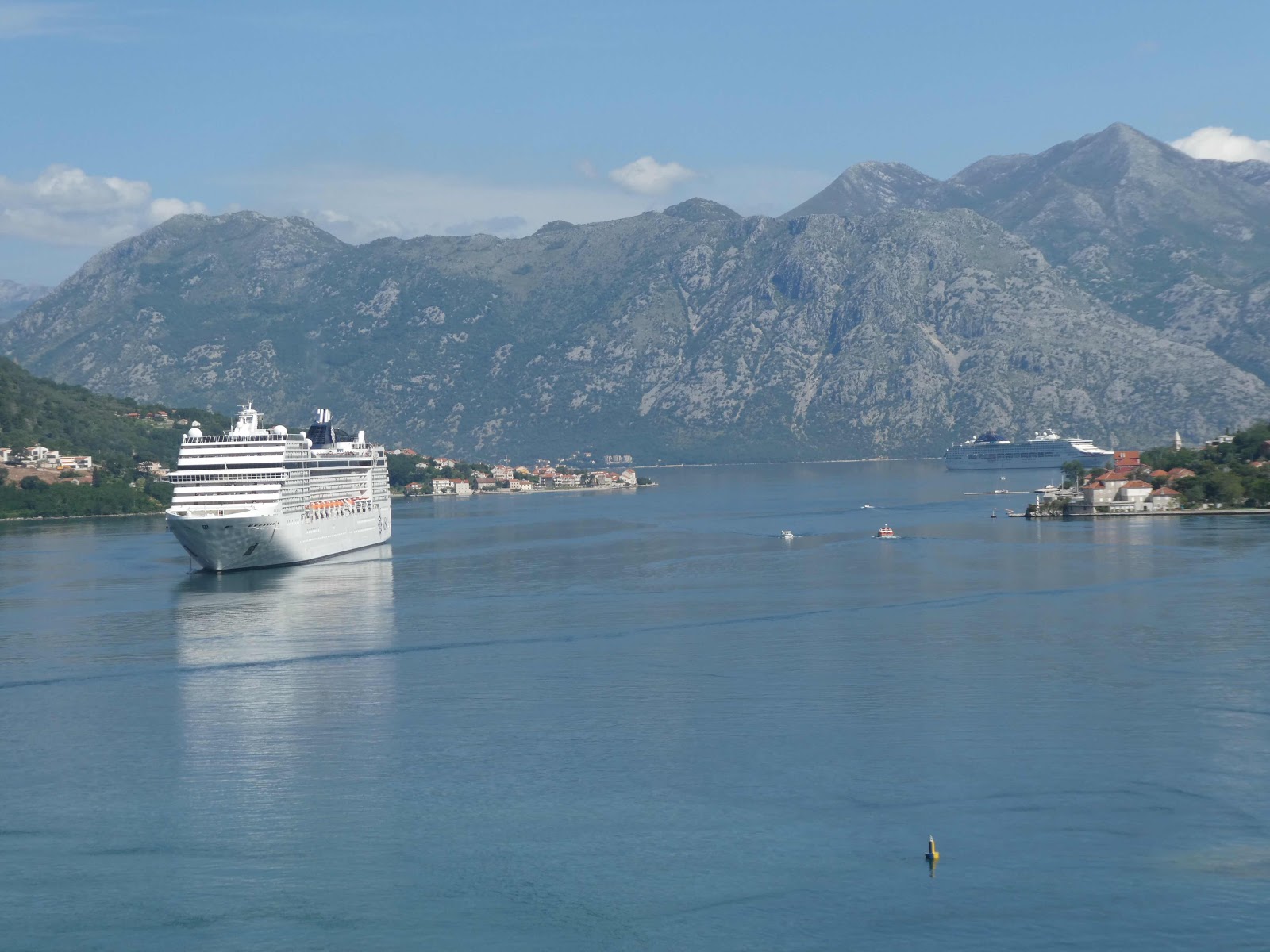 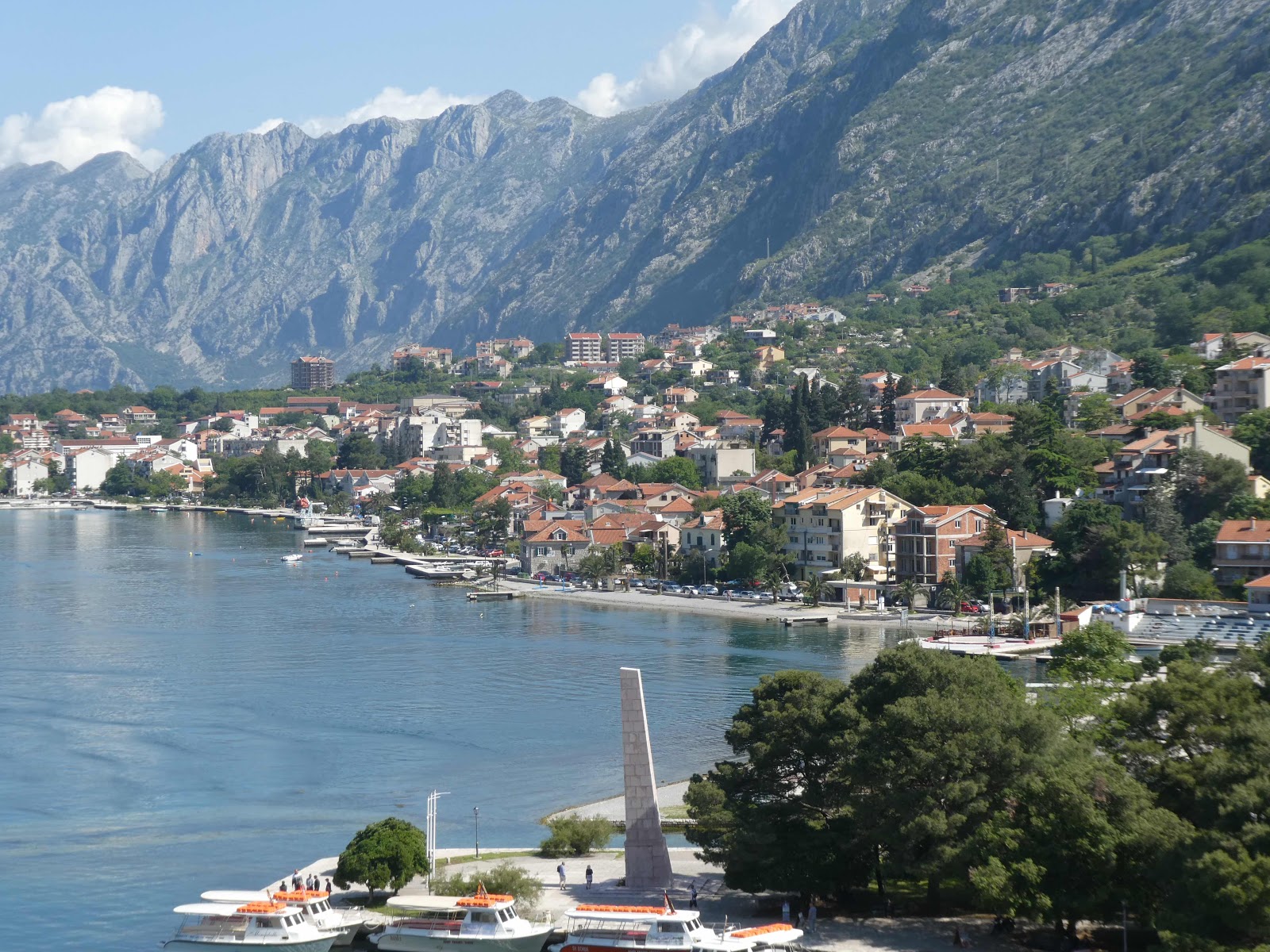 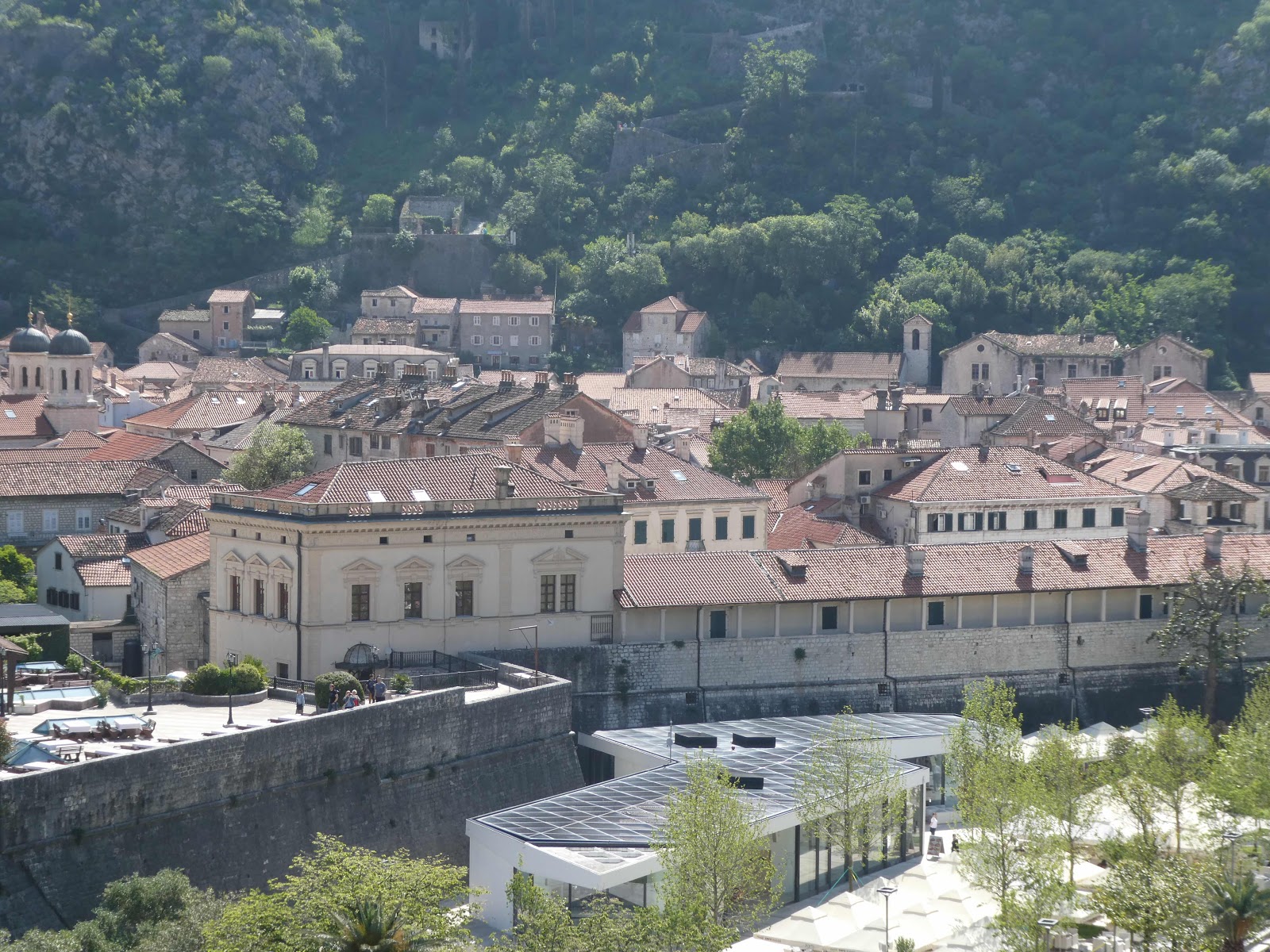 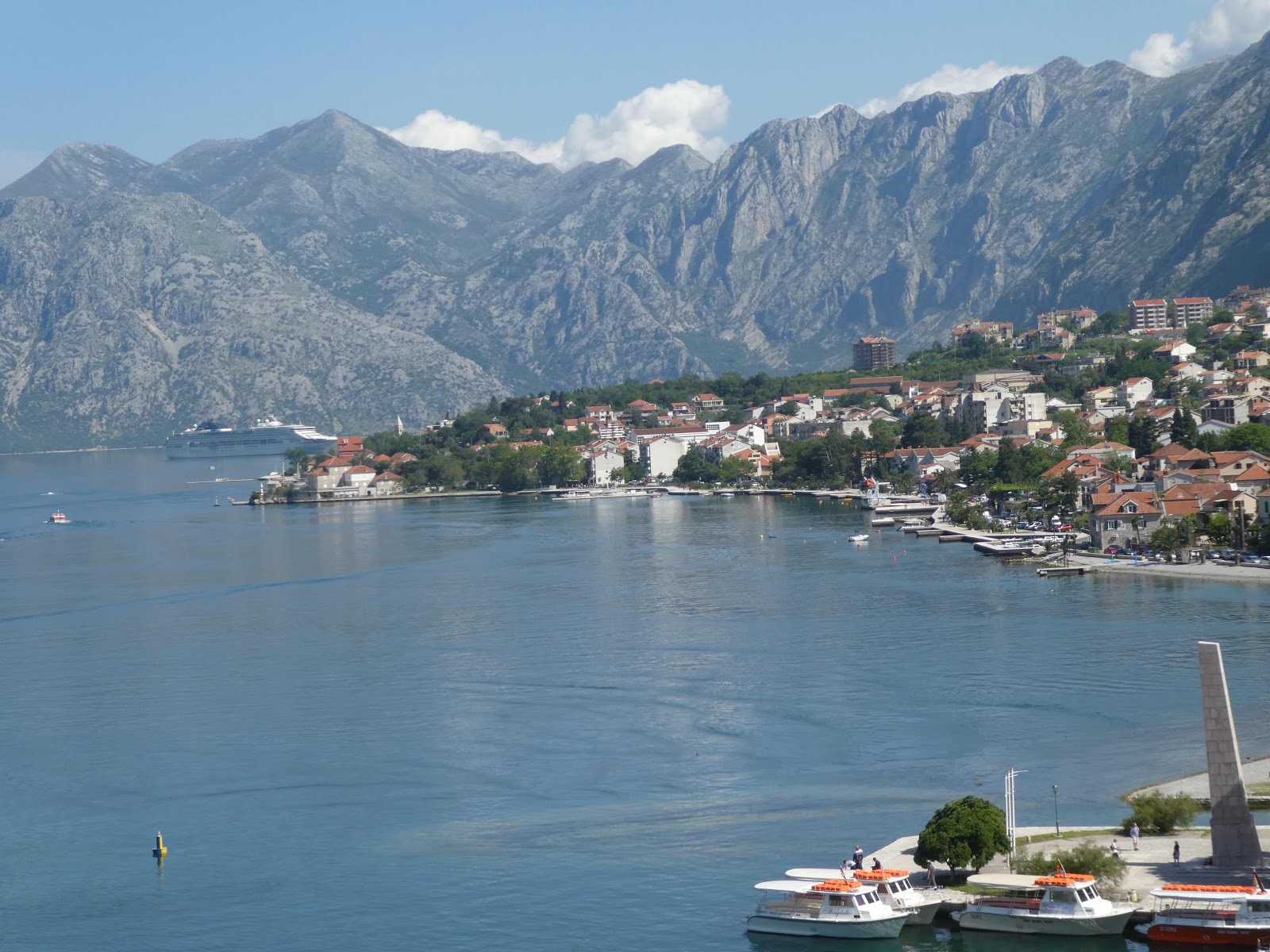 Montenegro is not in the EU and the customs/port authority took an age to get the paperwork sorted.  In fact no-one got off until gone 11am and some were even later than that as the authorities wanted a random number of passengers to go up to the main dining room to present their passports!

Our plan was to take a leisurely stroll through the old town but I got hijacked as I went through the port gates by a chap selling excursions.  There were about twenty or thirty or these people and it was all rather overwhelming.  I couldn’t say yes or no so we went off in search of the others and we all agreed that it was, in fact, good value.

Our driver, Nikola (male), took us first to see Jaz Beach which is famous for a Madonna concert held on it once! 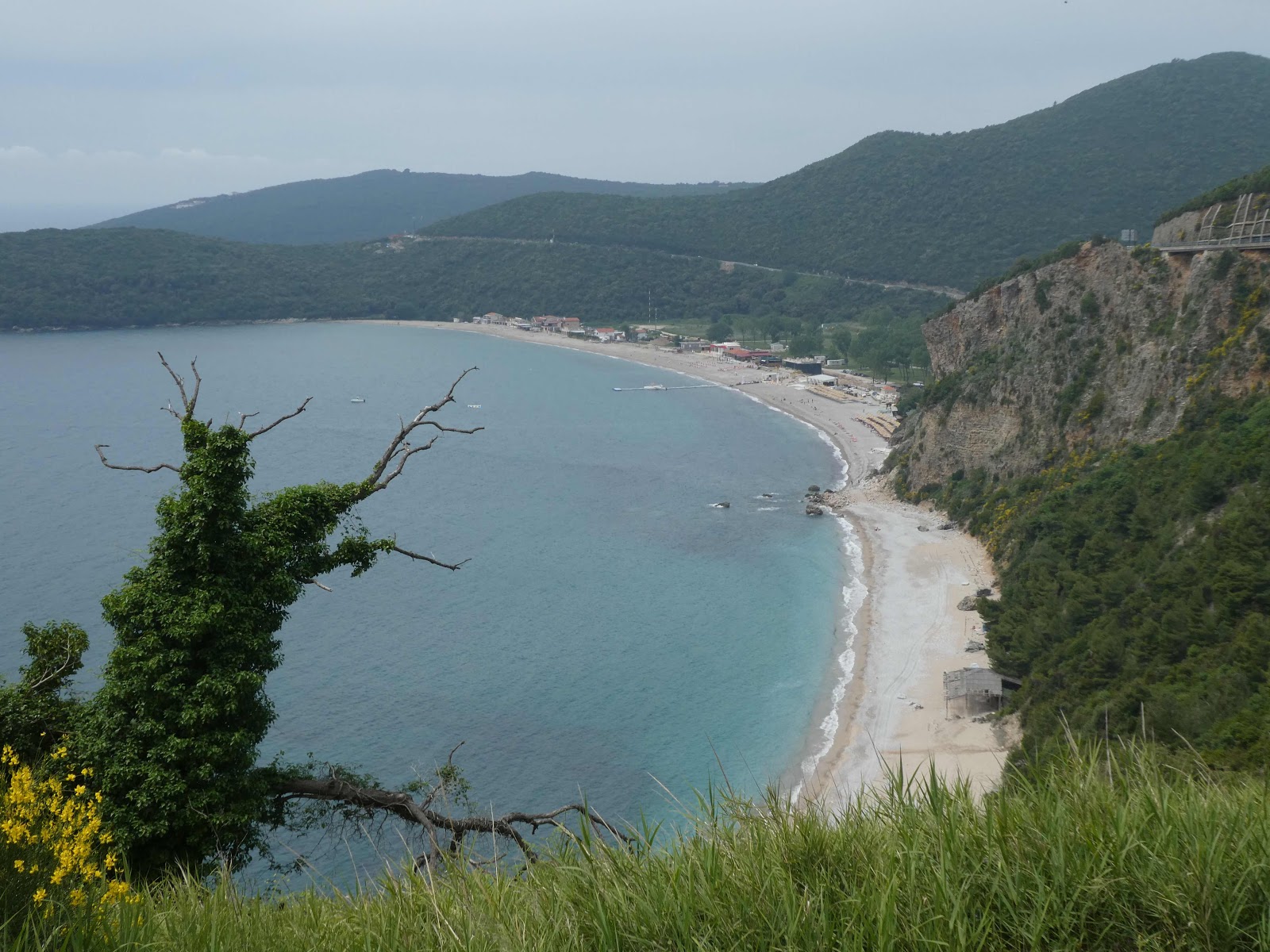 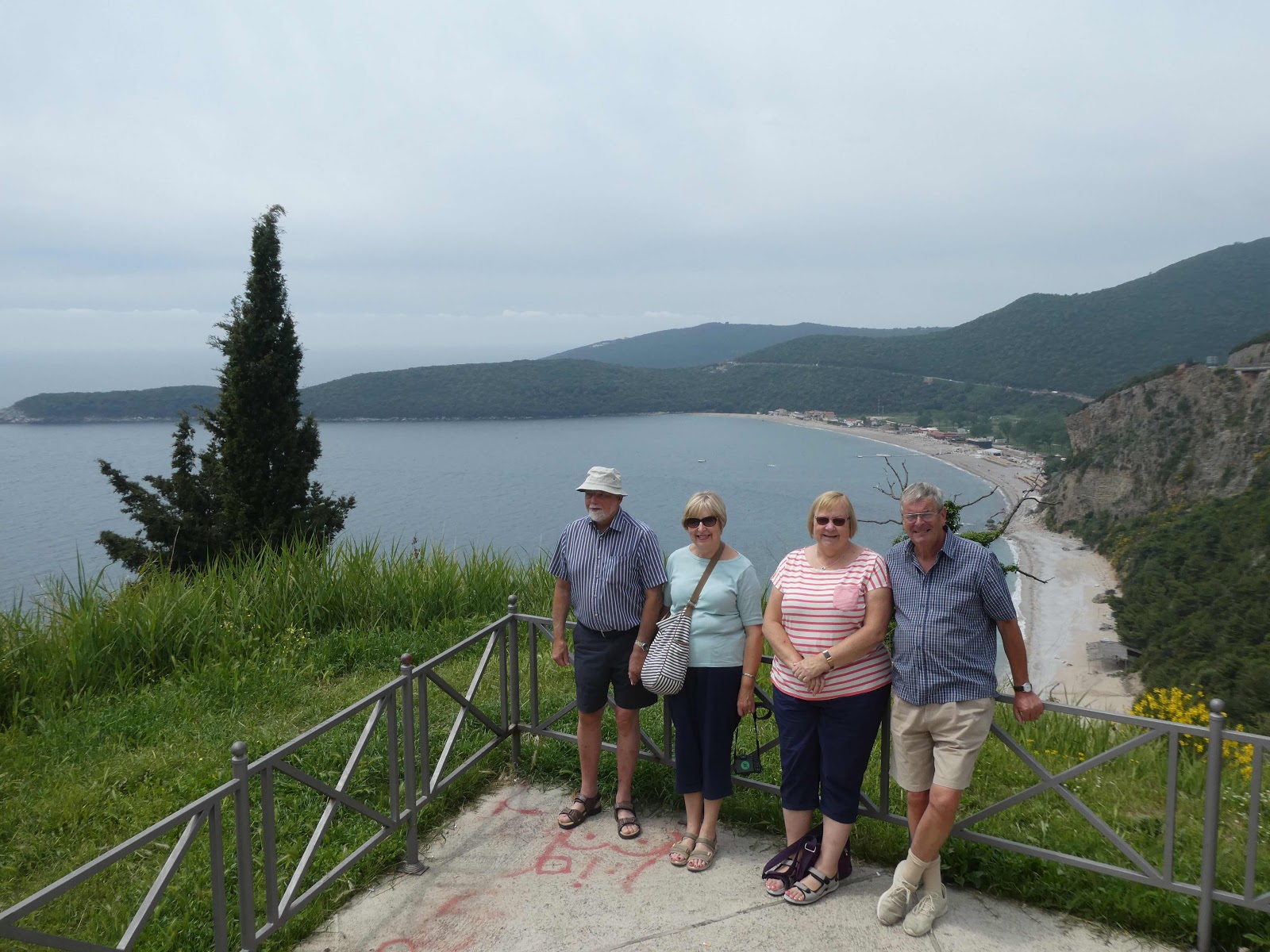 We then drove on to Budva, a 2,500 year old city and one of the oldest cities on the Adriatic coast.

Budva along with Kotor, Dubrovnik (Sunday) and Split (Monday) have had long and complicated histories.  Going from the Greeks, who founded them, via Romans, Byzantines, Venetians, Habsburg Monarchy, France, Austria, Austria-Hungary and Yugoslavia, to independence in 2006.

A catastrophic earthquake hit Budva on April 15th 1979 when most of the old town was devastated but today almost all of the buildings have been restored.

Montenegro only has about half a million citizens of whom only 32% are Montenegrins.  There are more Serbs who come in at 53%.

Anyway enough of the history lesson!  We found a nice restaurant on the local beach and had a beer and a sandwich for lunch. 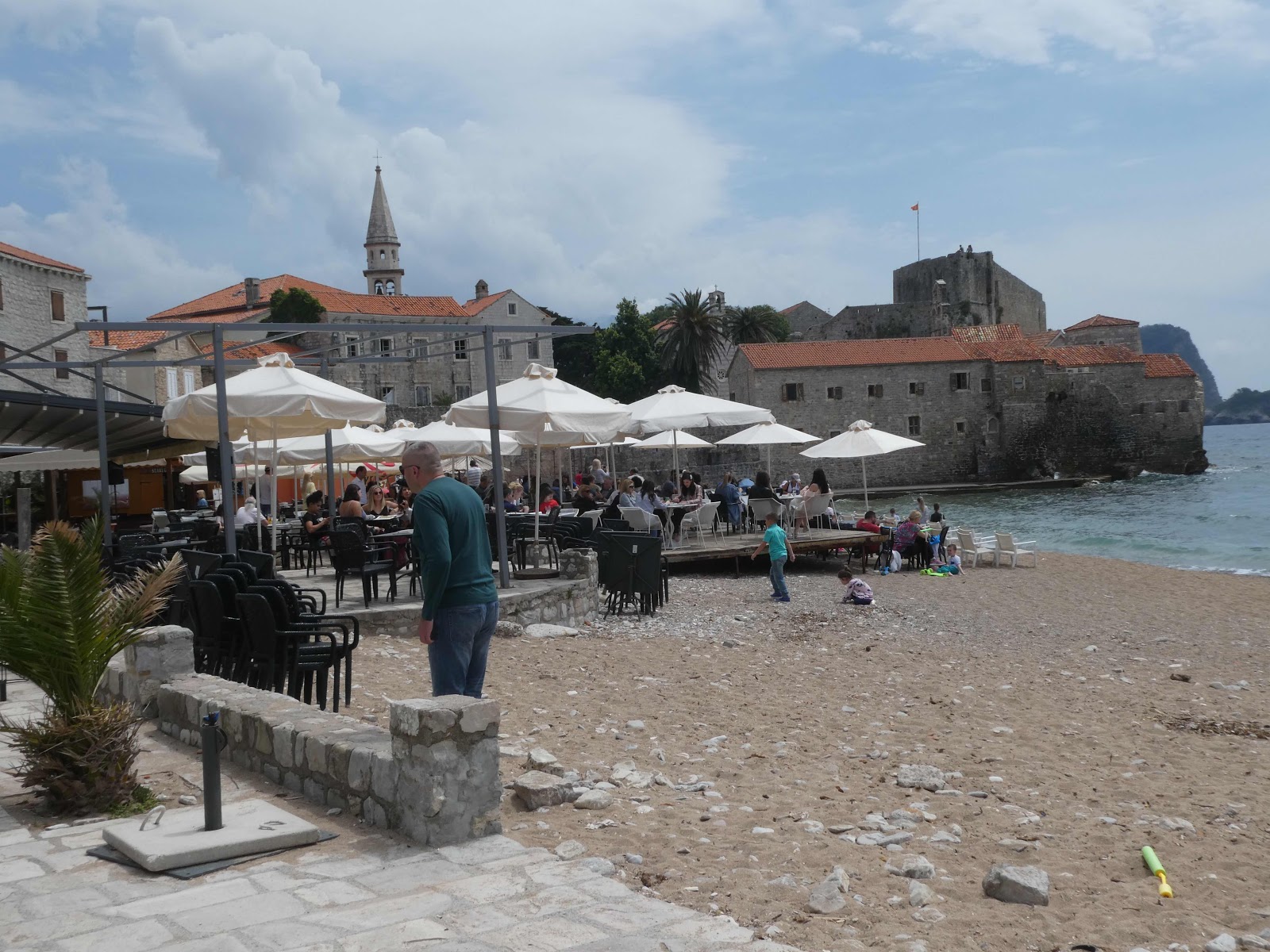 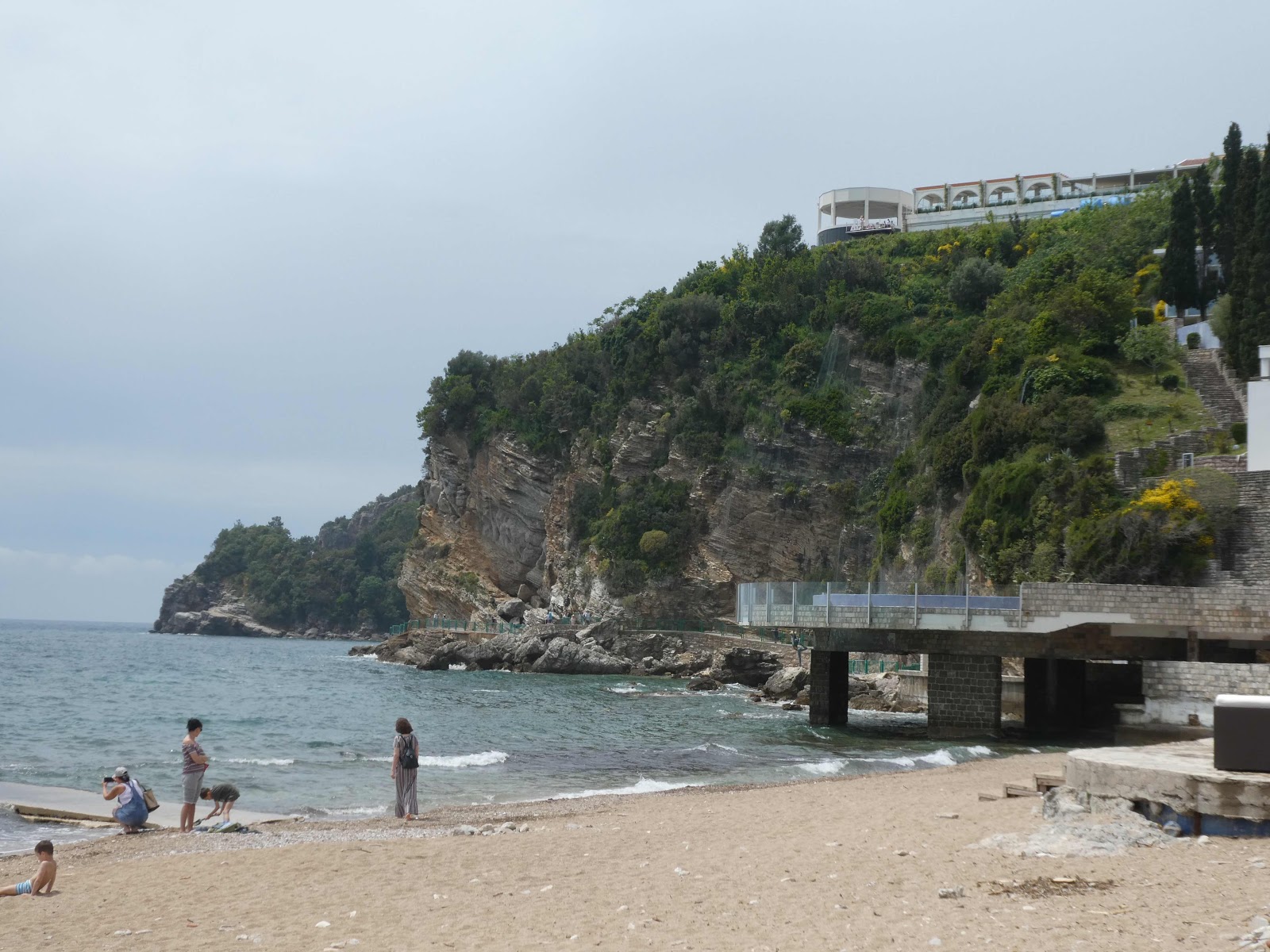 It was then time to explore the old town which had the familiar narrow streets and, in places, rather wonky buildings!  Tourism is the main industry in Montenegro and almost every shop sold gifts of some sort.  We didn’t have much time for exploring so just walked from the West Gate across the town to the East Gate, stopping to buy the occasional gift! 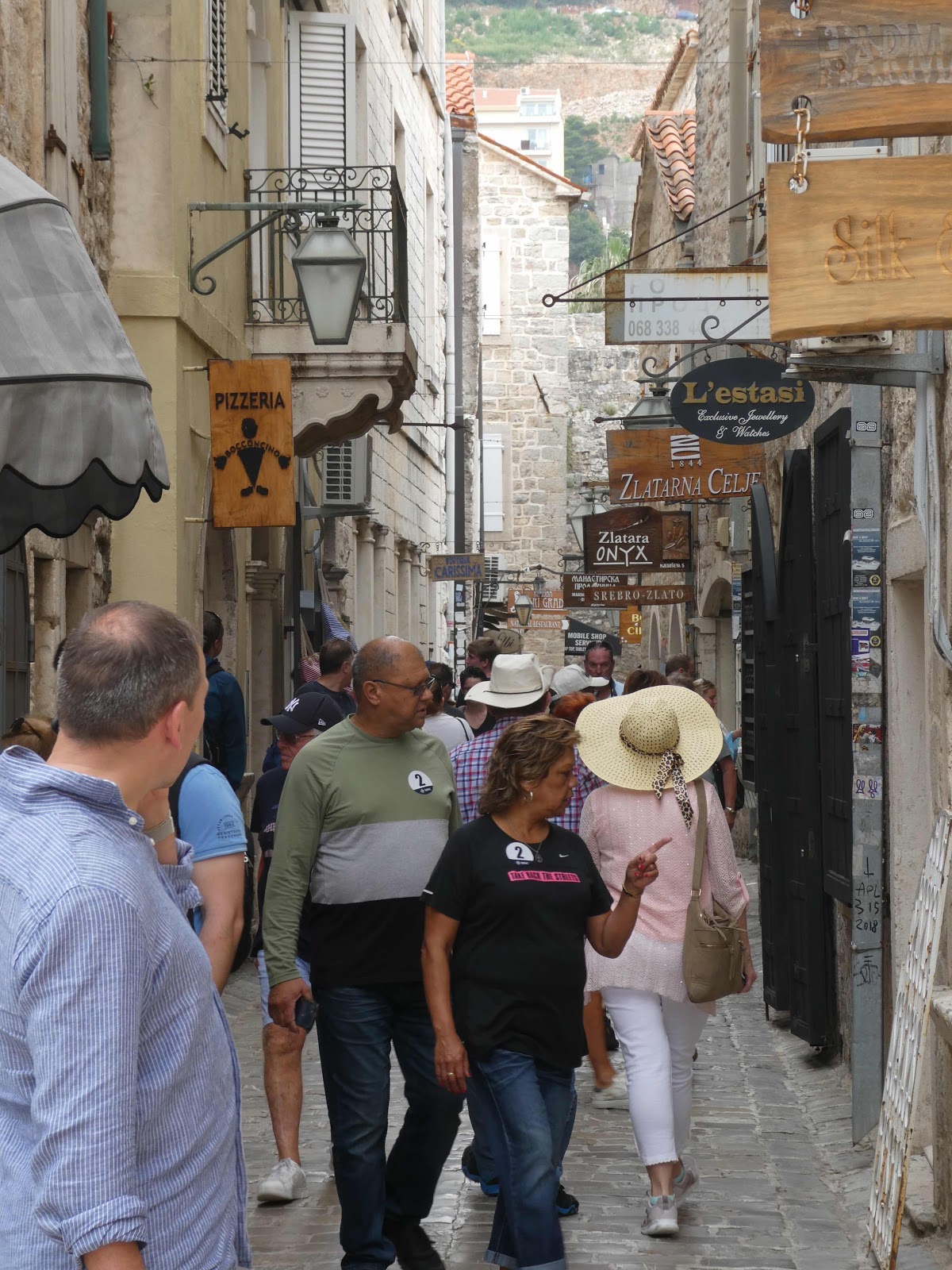 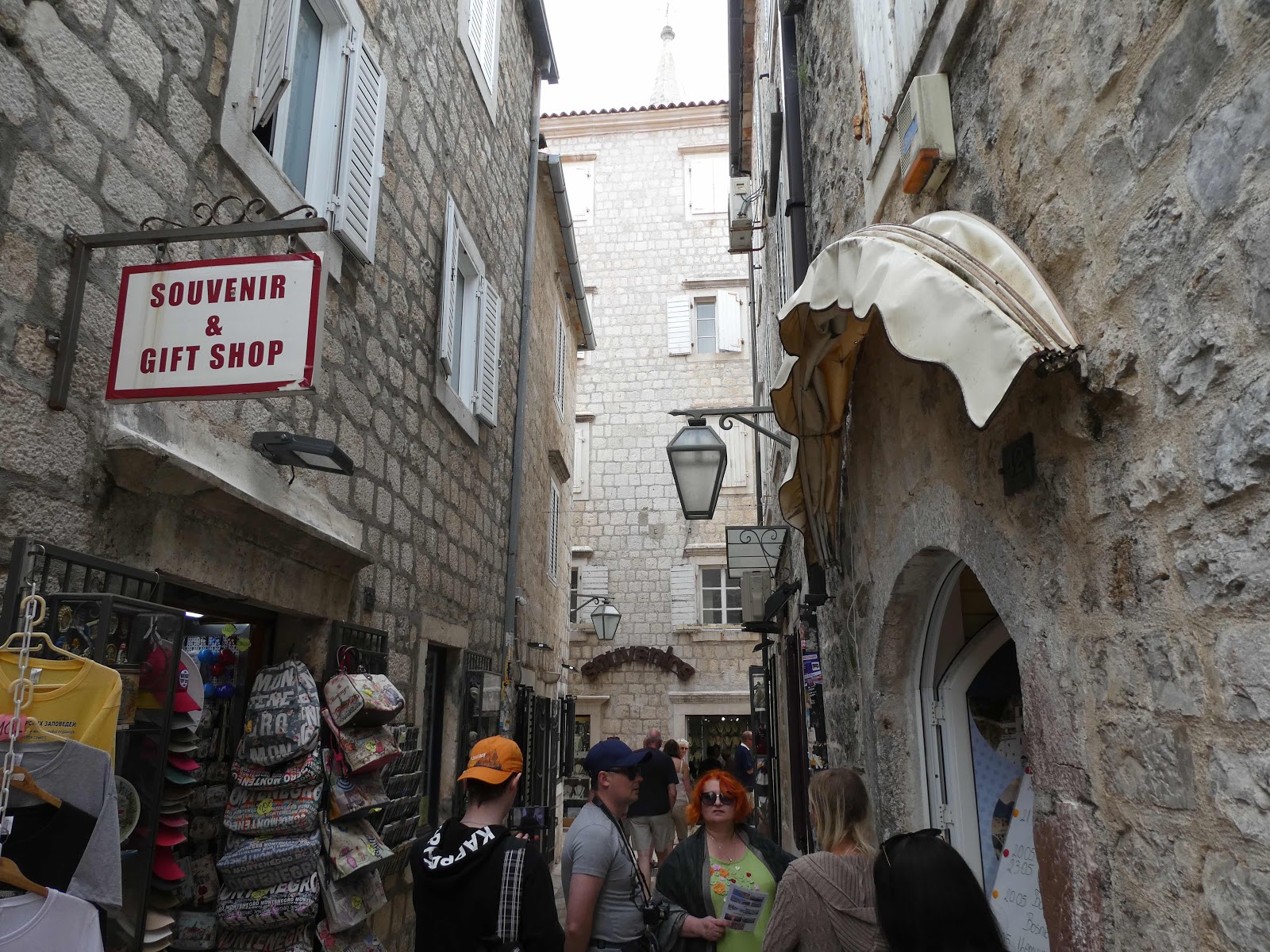 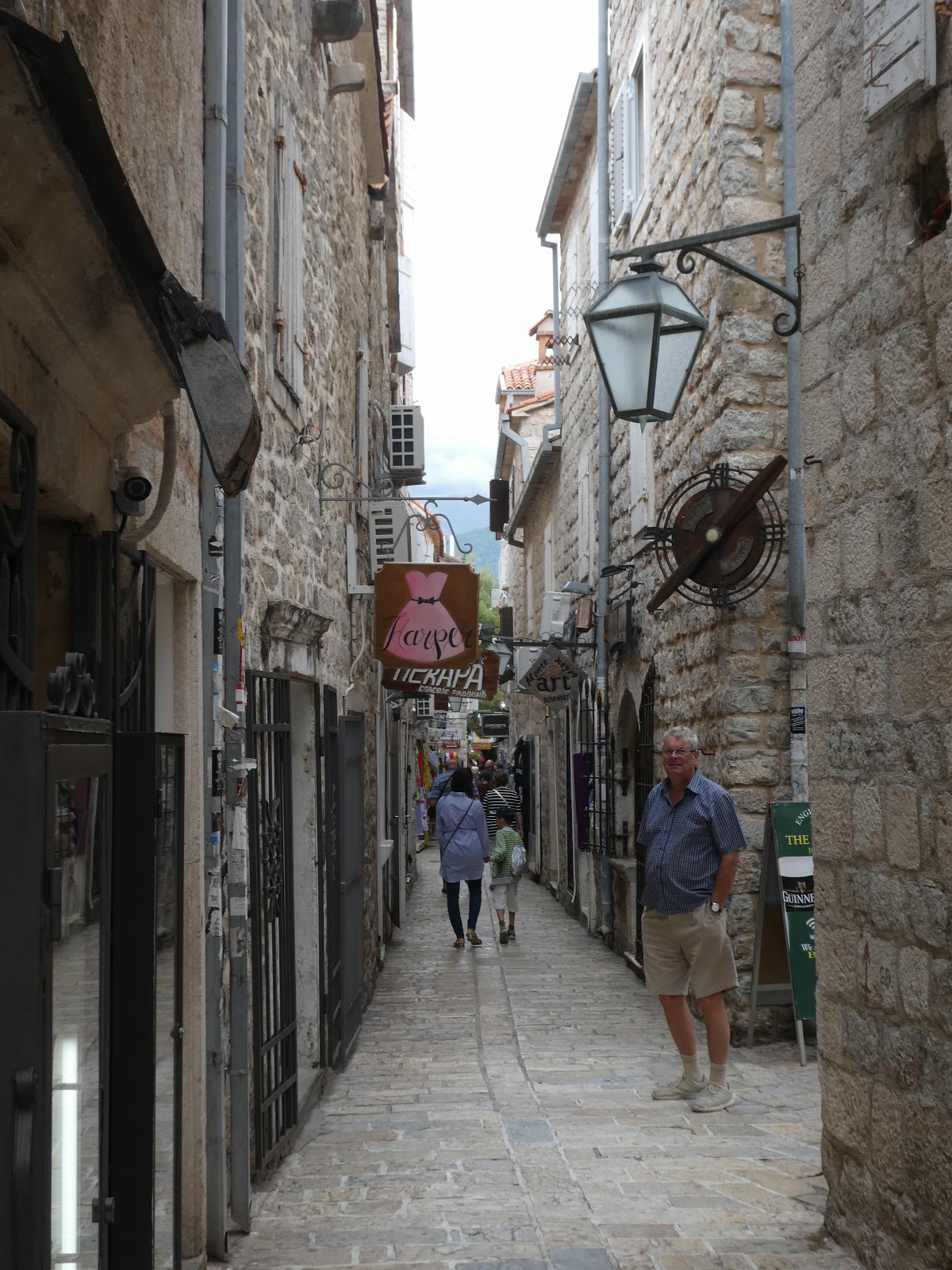 As we left the town we came across this bell.   It has been there since 1963 and is made of wood, so it can not make actual bell sound. It owes its existence to the movie "The Long Ships" in which it was in role of "a great bell, called 'The Mother of Voices', made of pure gold, three times the size of a man, made by monks many years ago! 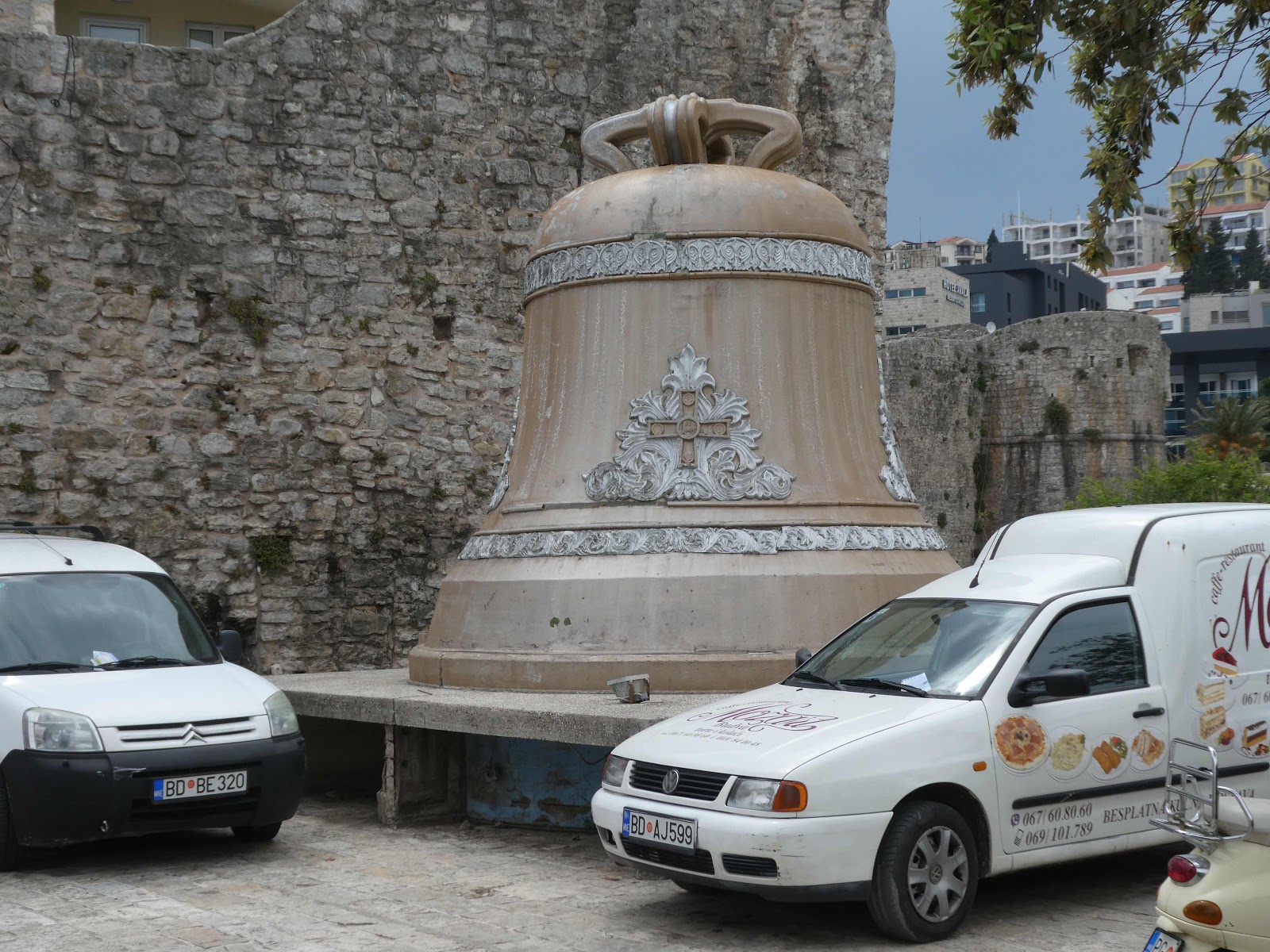 We met up again with Nikola who then drove us back to Kotor across the mountain.  We had a photo stop with a lovely view of Kotor and Discovery. 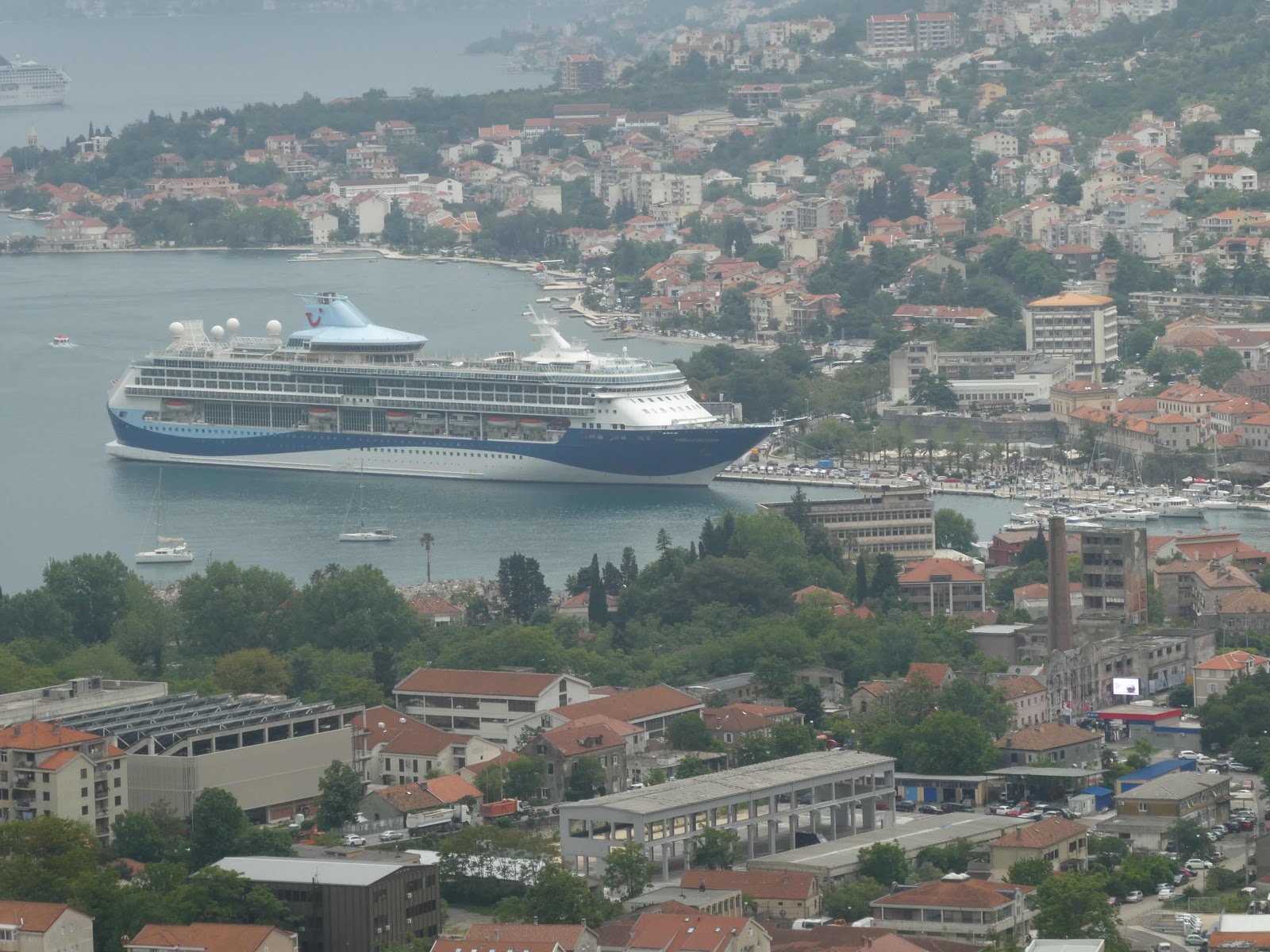 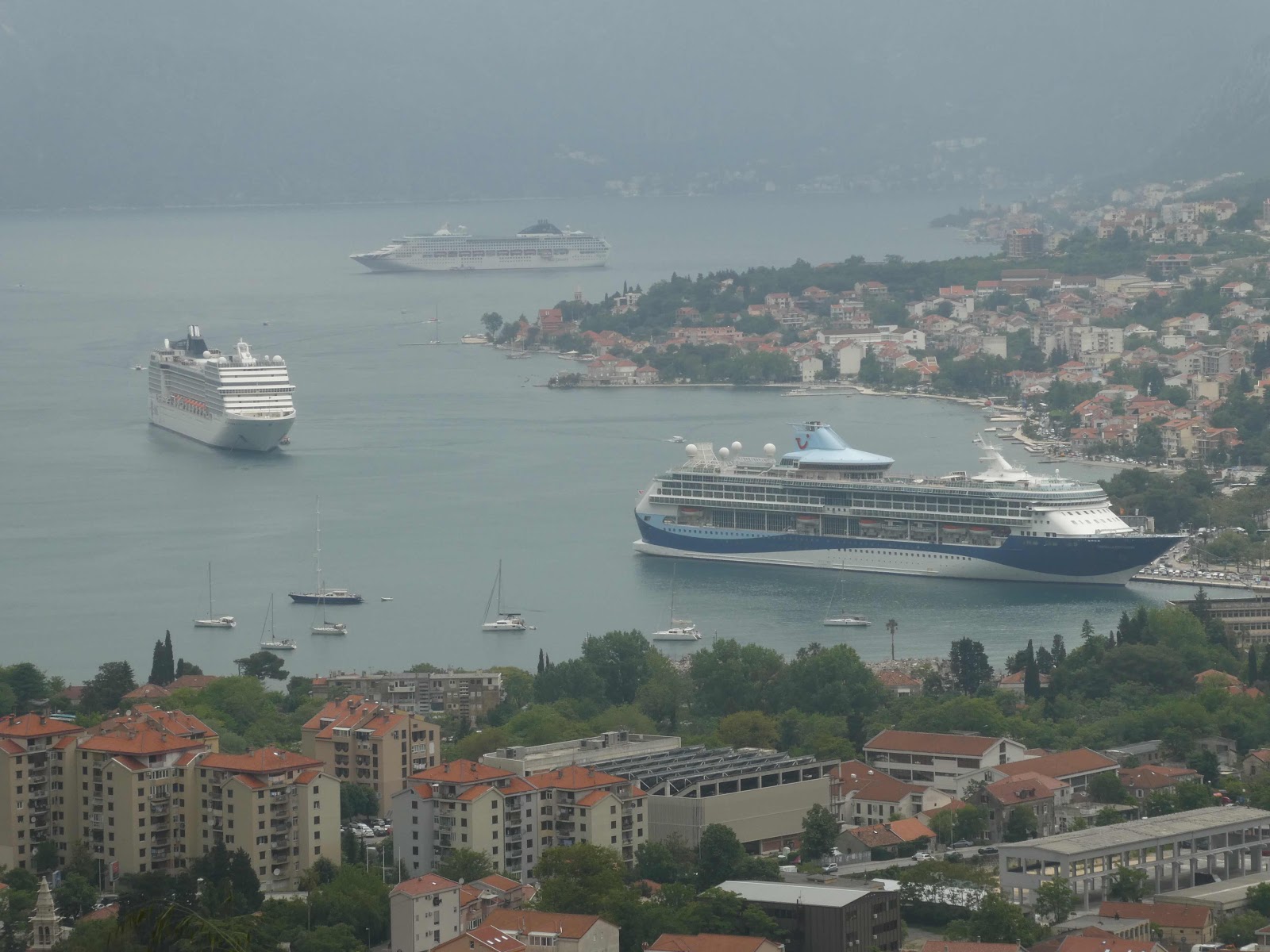 We all returned to the ship but Richard and I then went back ashore to explore Kotor’s old town.  It was very like Budva but with a stall selling ice cream round every corner - I expect you could make your self sick quite easily!! 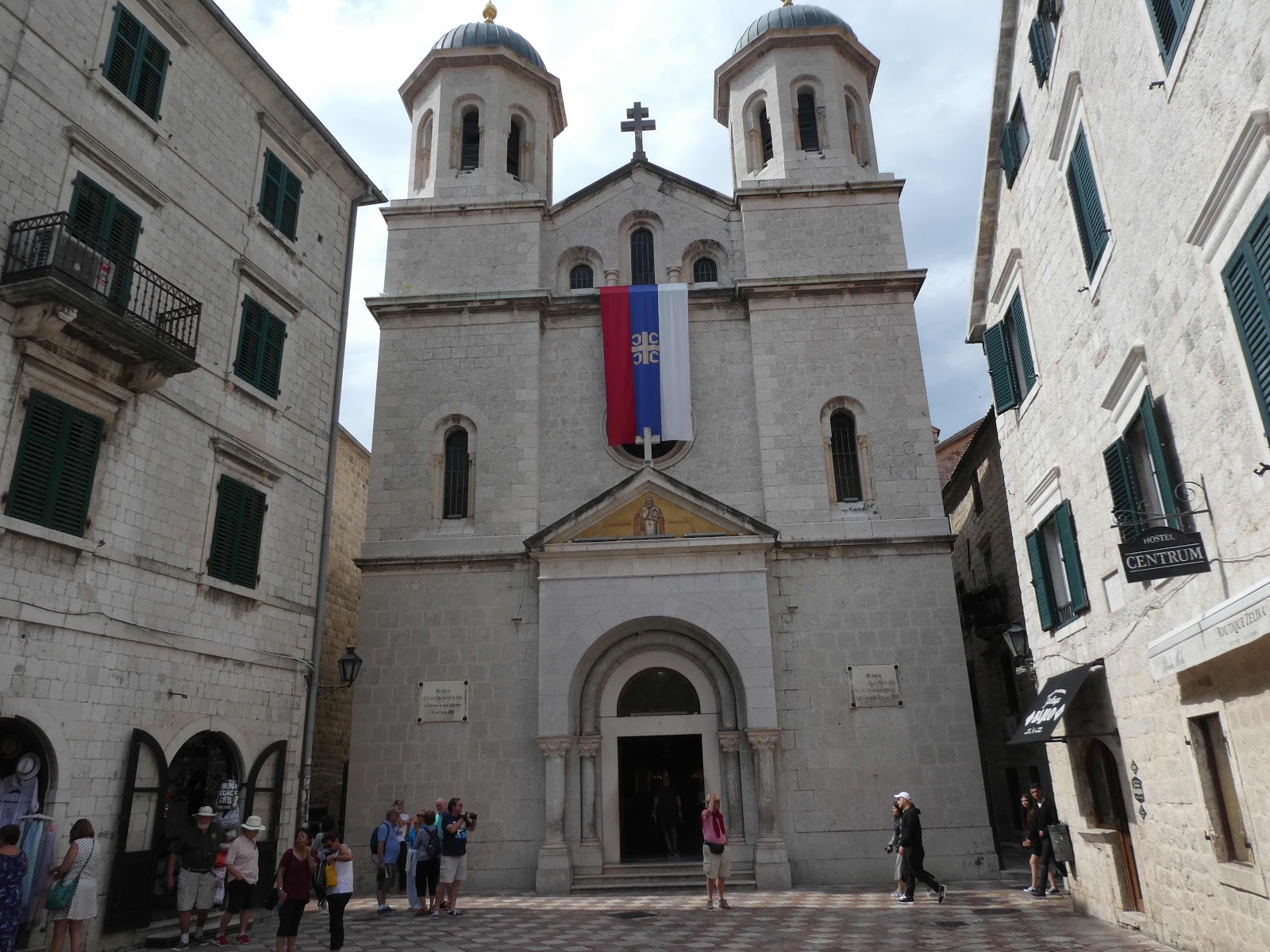 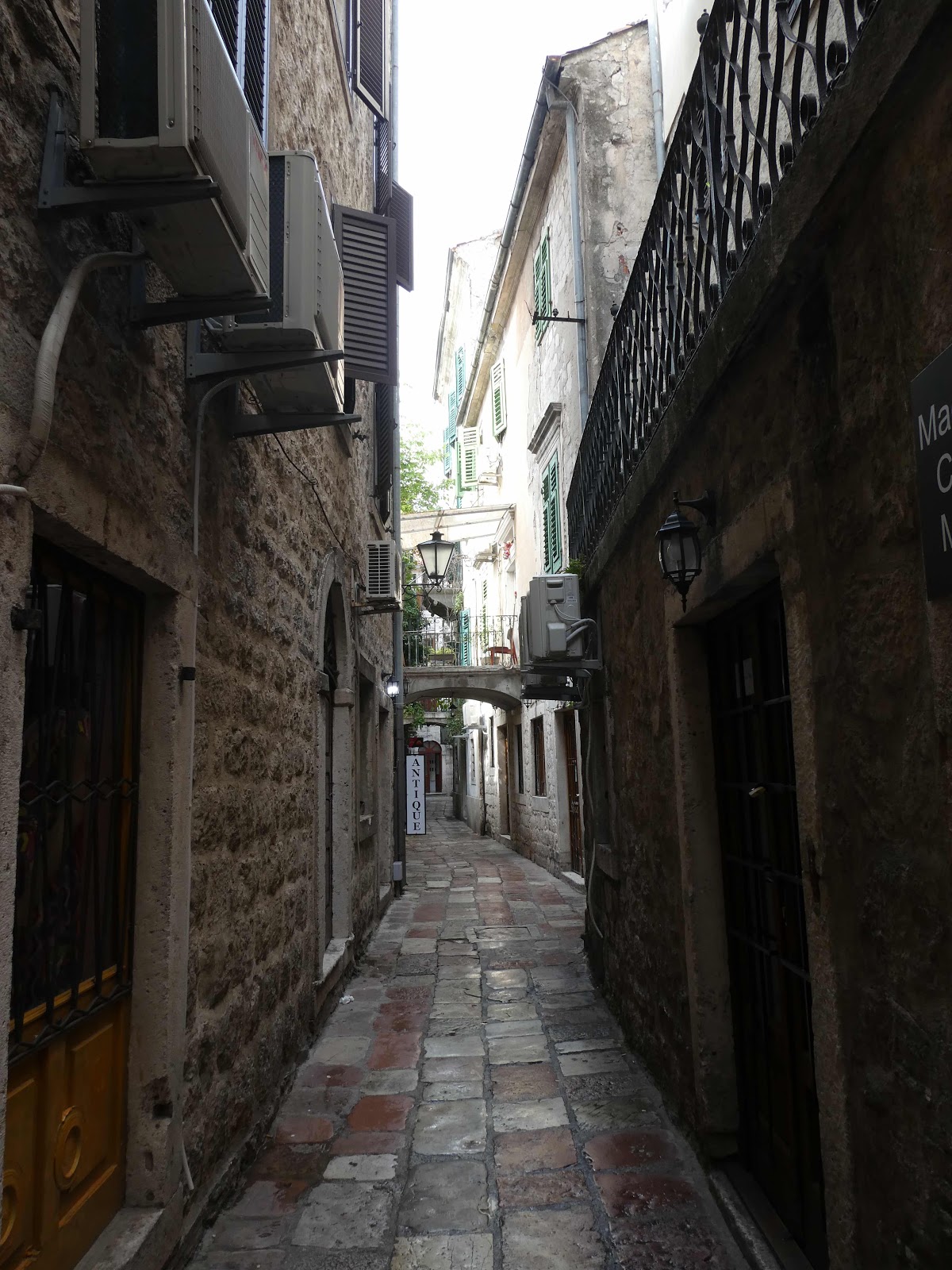 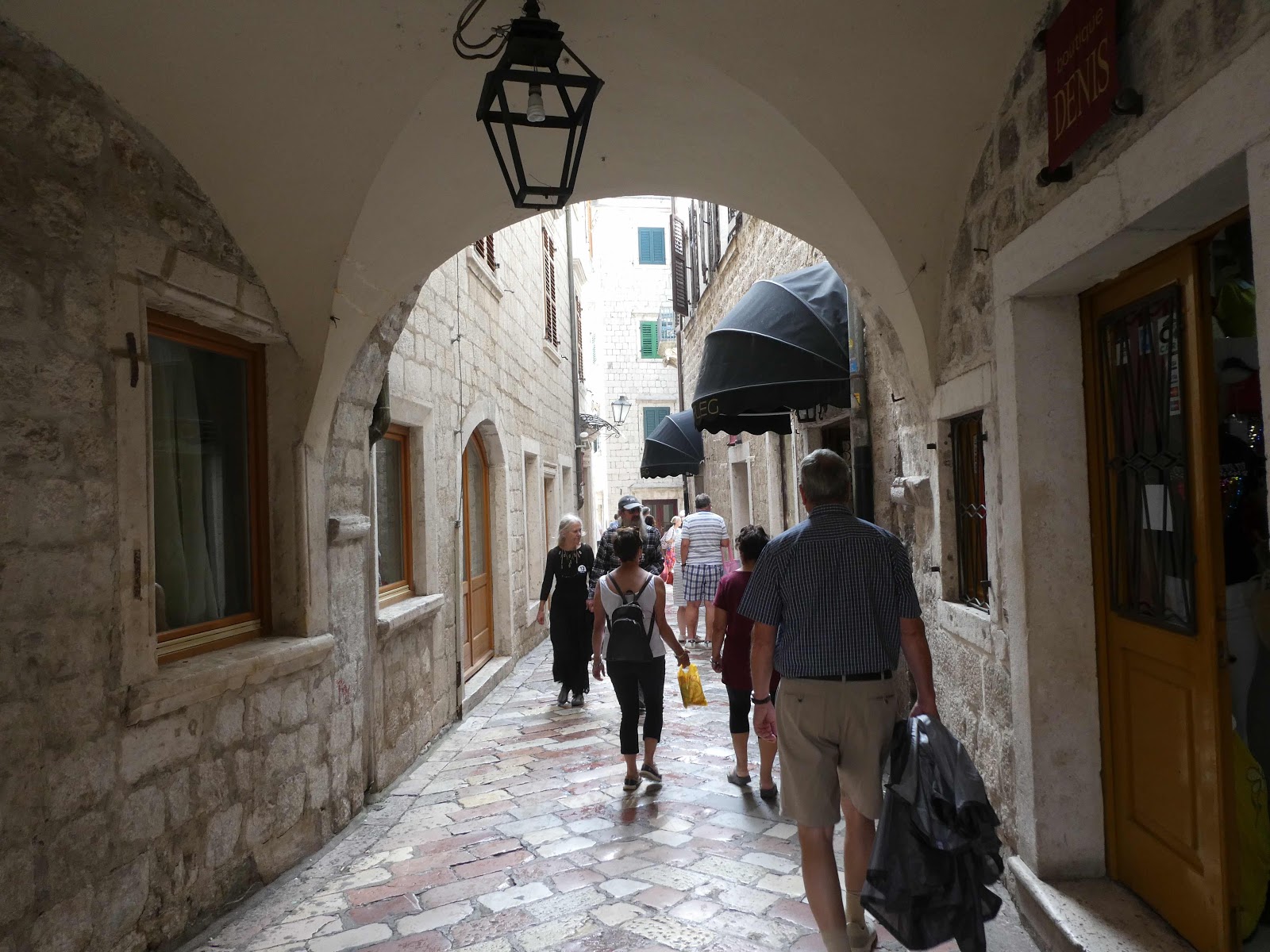 After our stroll we returned to the ship, had a rest and then went for dinner in the 47, the main dining room.  One of the things we like about this dining room are the large windows which meant that we could see the wonderful scenery as we sailed away from Kotor. 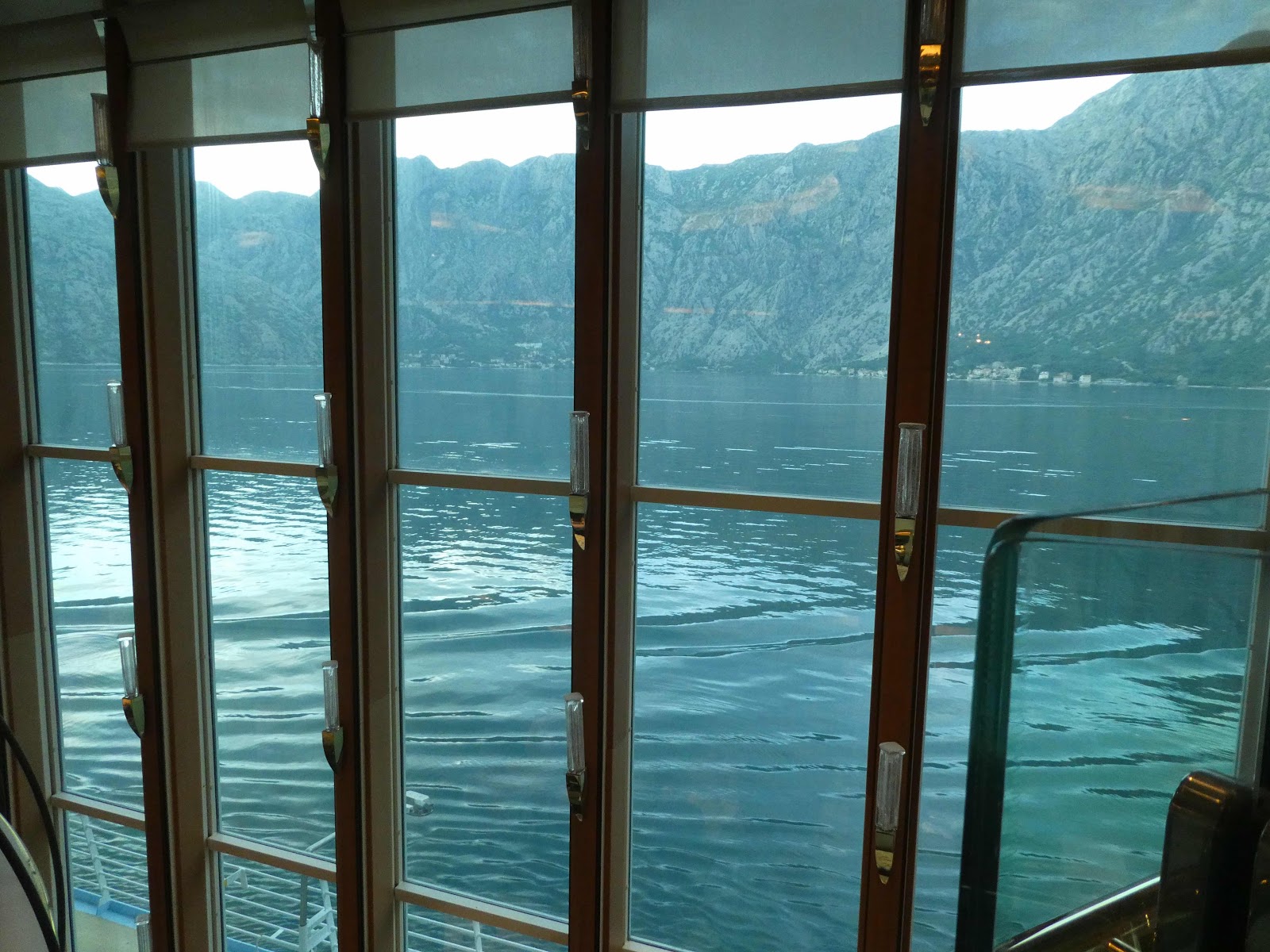 A couple of Baileys in Bar 11 (on deck 11 needless to say!) then we were ready to turn in.

Posted by Linda Gifford-Hull at 16:47