I am so behind with the blog posts as we have been mega busy.  However we have a sea day today so I hope to catch up.

Penny and I had been to Dubrovnik about 15 years ago.  I was working and Penny came along for the ride!

We arrived into the port at around 8.00am and met, Ivo, our driver for the day.  Our first stop was high above the old town where we had an amazing view.  We were almost at the top of Mount Srdj where there is a cable car.  Last time we came was not that long after the1992 - 1994 Croat-Bosniak war and the cable car wasn’t working.  Sadly it isn’t working again due to internal wrangling.  This is what their website says! 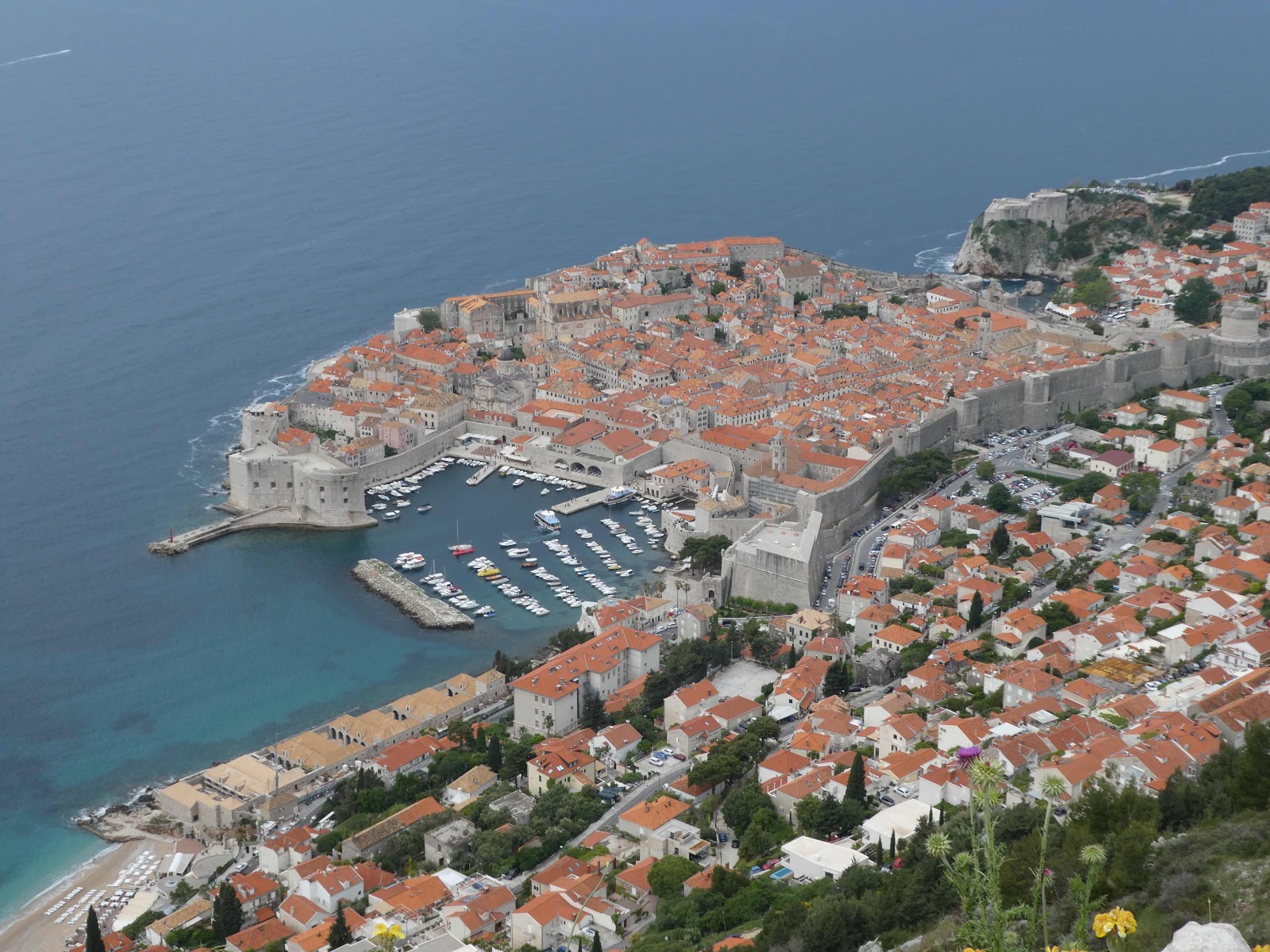 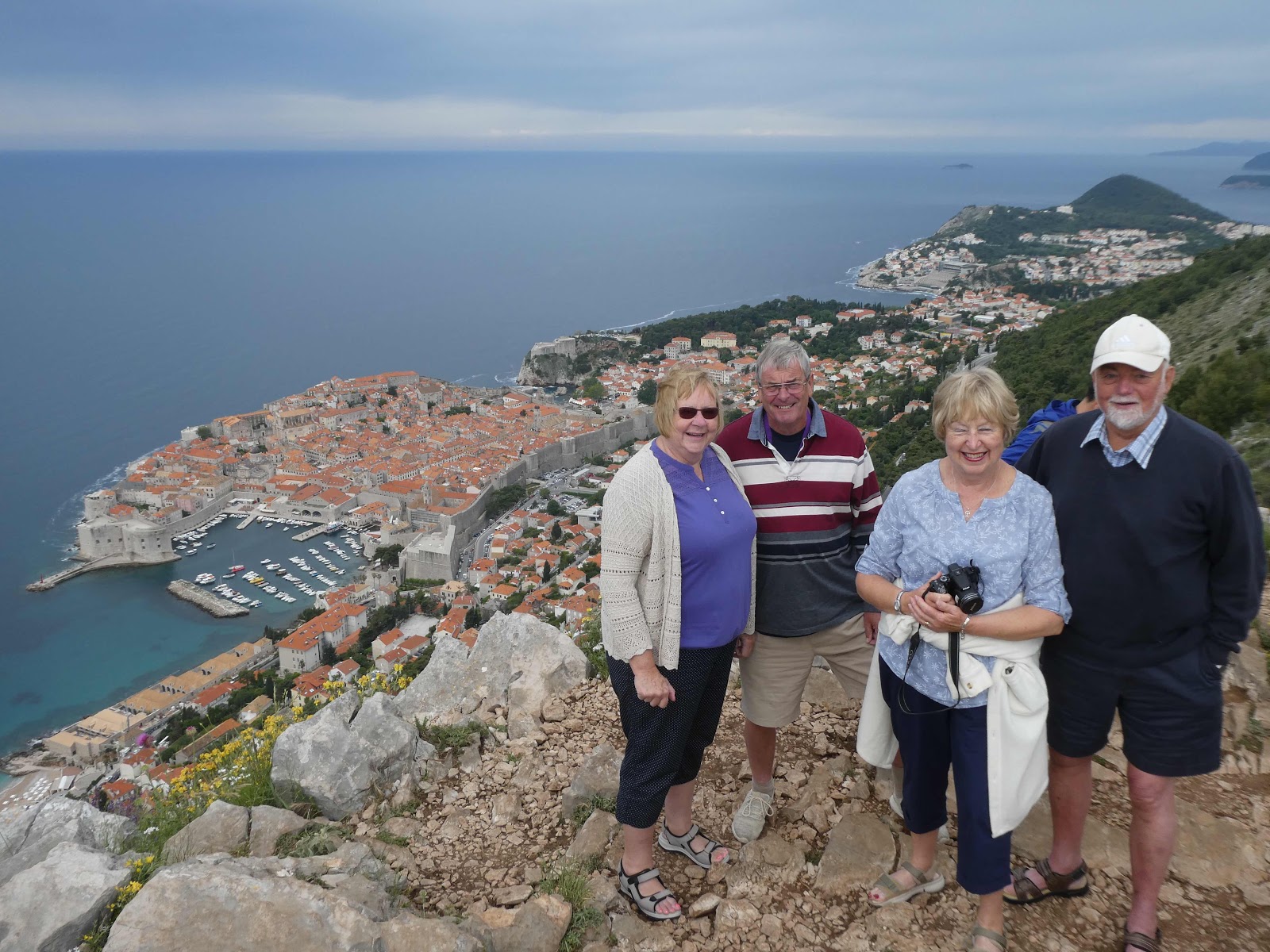 This is the island of Lokrum where Austrian archduke (and short-lived Emperor of Mexico) Maximilian once had a holiday home on the island. A monastery and a botanical garden survive from his era. On the island's highest point at 315 feet above sea level stands Fort Royal Castle, which was built by the French during Napoleon's occupation of Croatia, though it was later named "Maximilian's Tower" by the Austrians. 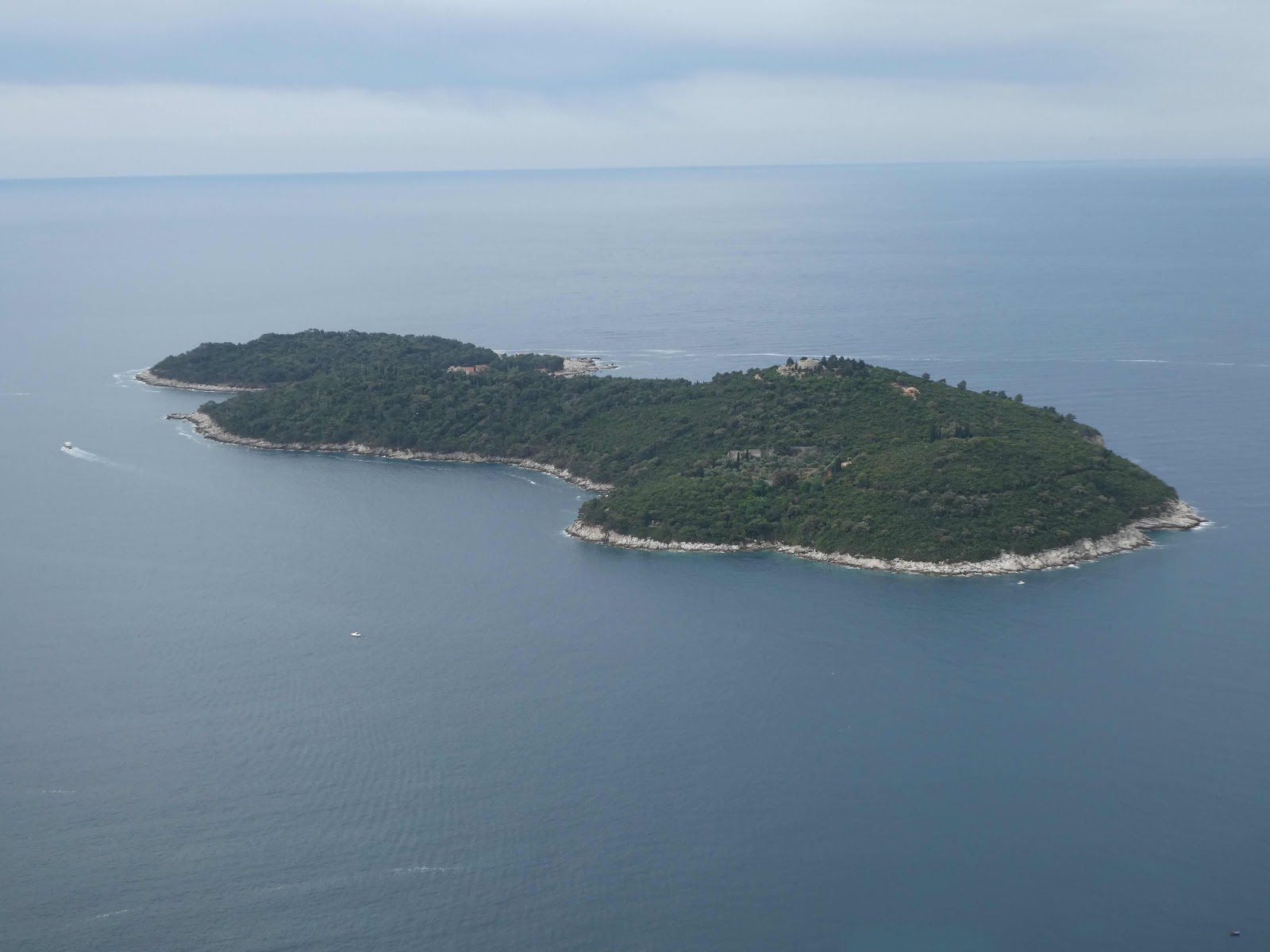 It was then on to the pretty seaside town on Cavtat. Fortunately the town sits on a peninsula and wasn’t too affected by the war.

I just love this photo. 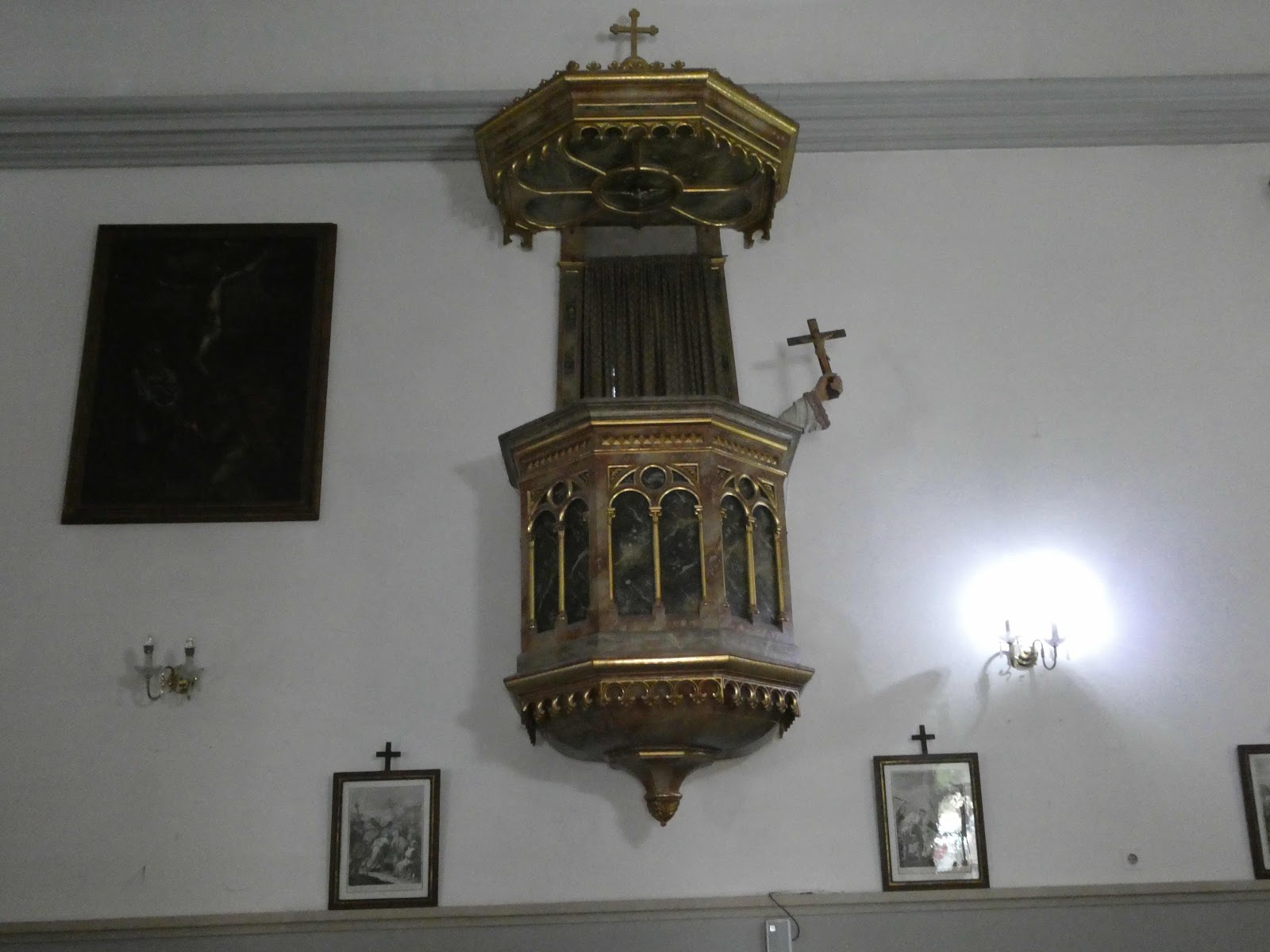 We went to to the church of Our Lady of the Snow where there are some wonderful paintings.   The saint in the bottom right painting is St. Nicholas.  Once, on a journey, he called upon a poor farmer who took him in for the night.  While talking over a meal the farmer told St. Nicholas that he had three daughters who would never marry well as he had no money for their dowries.  In the morning  St. Nicholas was so pleased with the hospitality he had received that he put three golden balls in the stockings of the three daughters and hung them over the fireplace - it was December 6th.  This is where the tradition of Christmas stockings comes from though, of course, we now have our presents on December 25th. 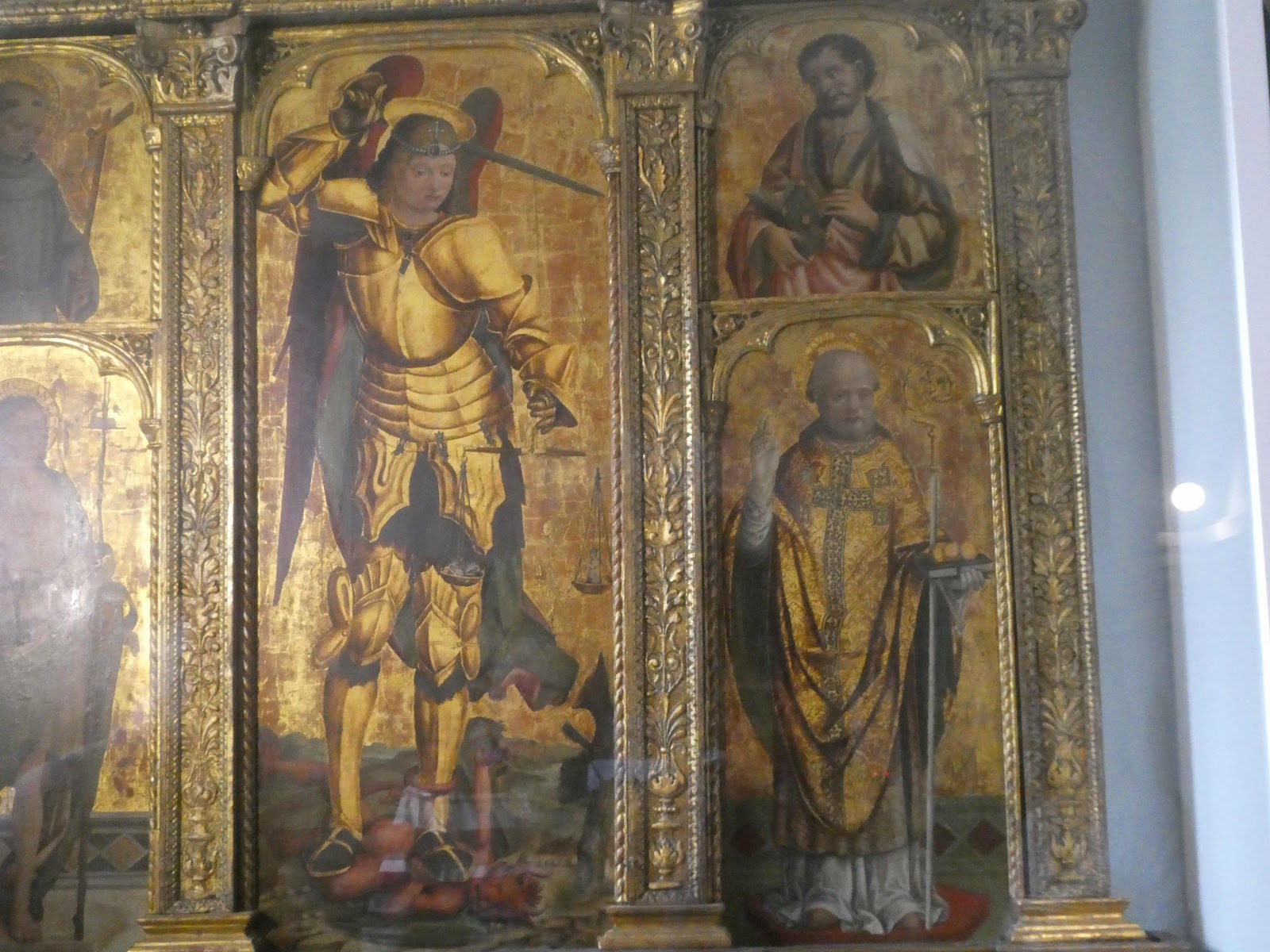 We had a coffee sitting by the harbour - it was really lovely. 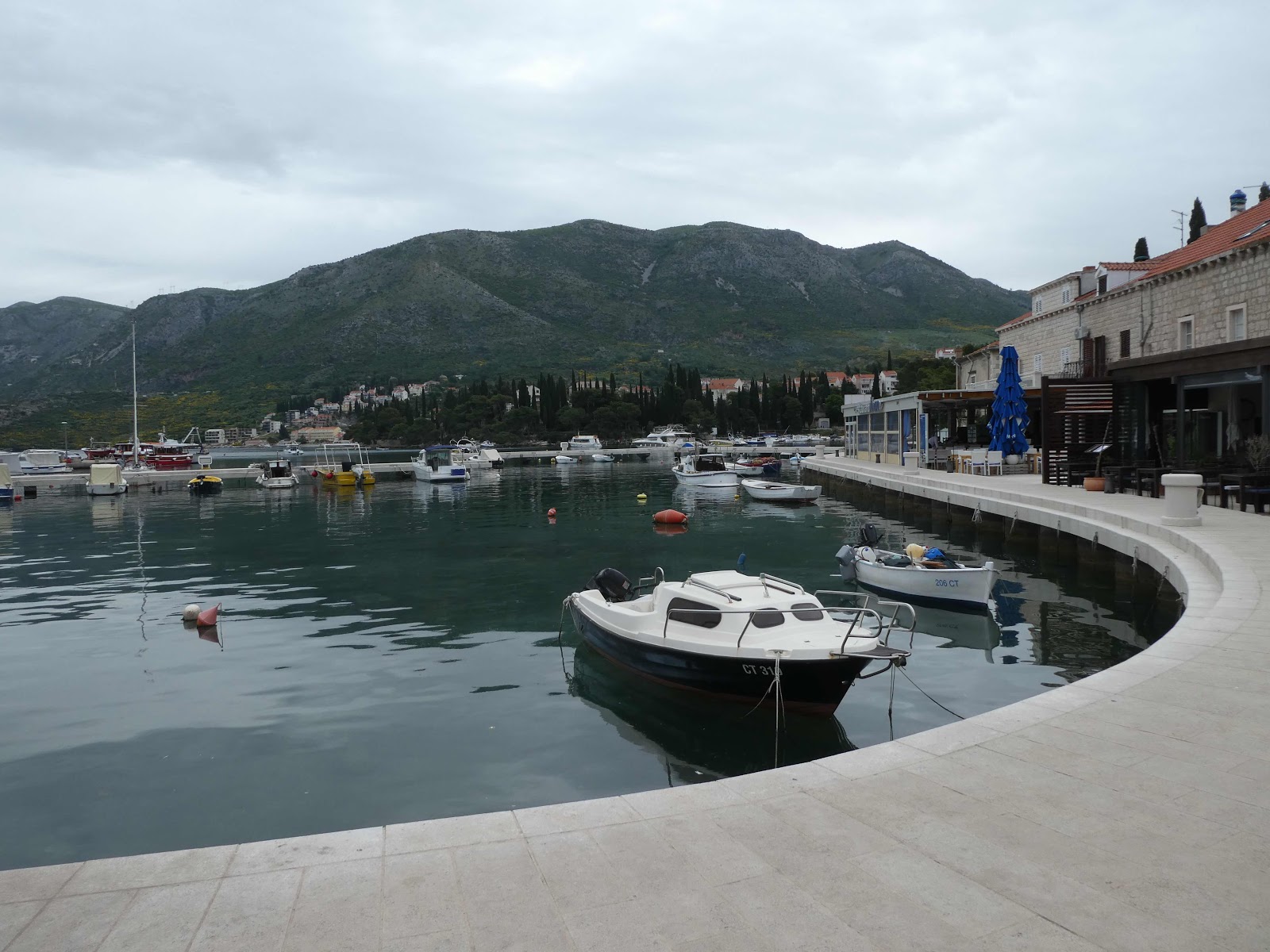 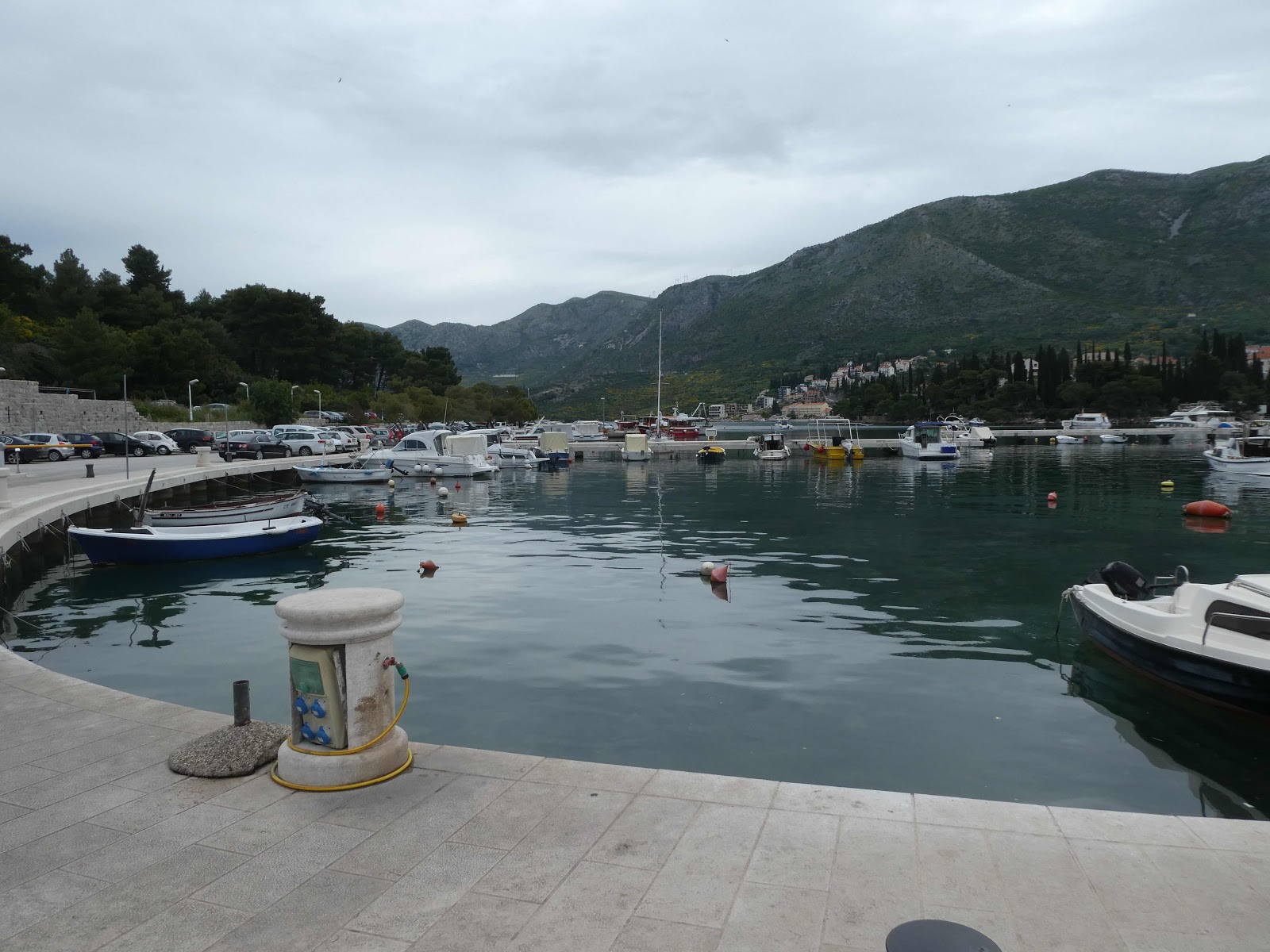 We then drove to Dubrovnik old town via the small village of Zupa Dubrovacka which was destroyed in the war but has since been rebuilt.  Back in Dubrovnik we sadly said goodbye to Ivo as there is no parking anywhere near the town gates and the whole traffic system was horrendous, but we said hello to Toni (male) who was going to show us round.  .

In 1991, after the break-up of Yugoslavia, Dubrovnik was besieged by Serbian and Montenegren soldiers of the Yugoslav People’s Army (JNA) for seven months and suffered significant damage from shelling.  After repair and restoration works in the 1990s and early 2000s, Dubrovnik re-emerged as one of the top tourist destinations in the Mediterranean

Last time Penny and I were in Dubrovnik it was November and very quiet so when we went in and encountered hoardes of people it was a bit of a shock!

It was very difficult to appreciate the buildings and also to hear what Toni was saying, however one place that we did hear about is the door in the photo below which was the orphanage.  In 1434 the first orphanage was opened in Dubrovnik, making it one of the first ever institutions of its kind in the world. The government of the Republic of Dubrovnik was way ahead of its time in the care and treatment of children. The council decreed in 1432 that an orphanage be opened in the city with their decision reading “It is disgusting and inhuman to throw small human beings around the city as if they were animals.” This started the movement to open an orphanage to take care of the city’s children.  During the time of the Republic children would stay in the orphanage until the age of six, after which they were given for adoption or sometimes their parents would take them back. As many of the children ended up in the orphanage due to the extreme poverty of their parents. And to avoid the shame of handing their children over to the orphanage a small entrance space was created in the front of the building on which parents would place their children and then by turning a wheel the plate would then swing inside carrying the baby.

Dubrovnik was very badly damaged during the Croat-Bosniak war and a lot of the buildings have been rebuilt but they have left shrapnel holes in buildings for people to see. 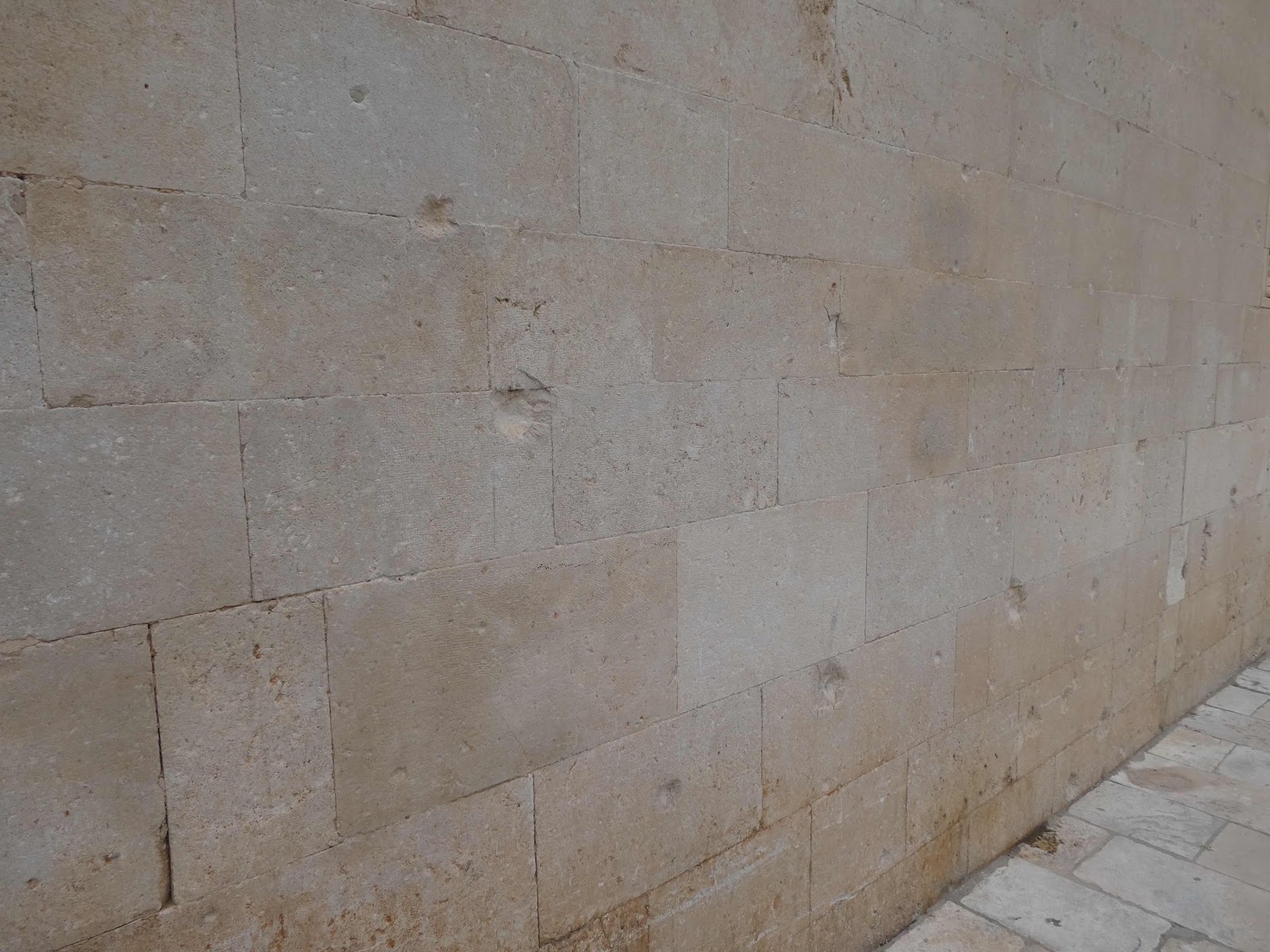 The following are some of the photos I took in the town. 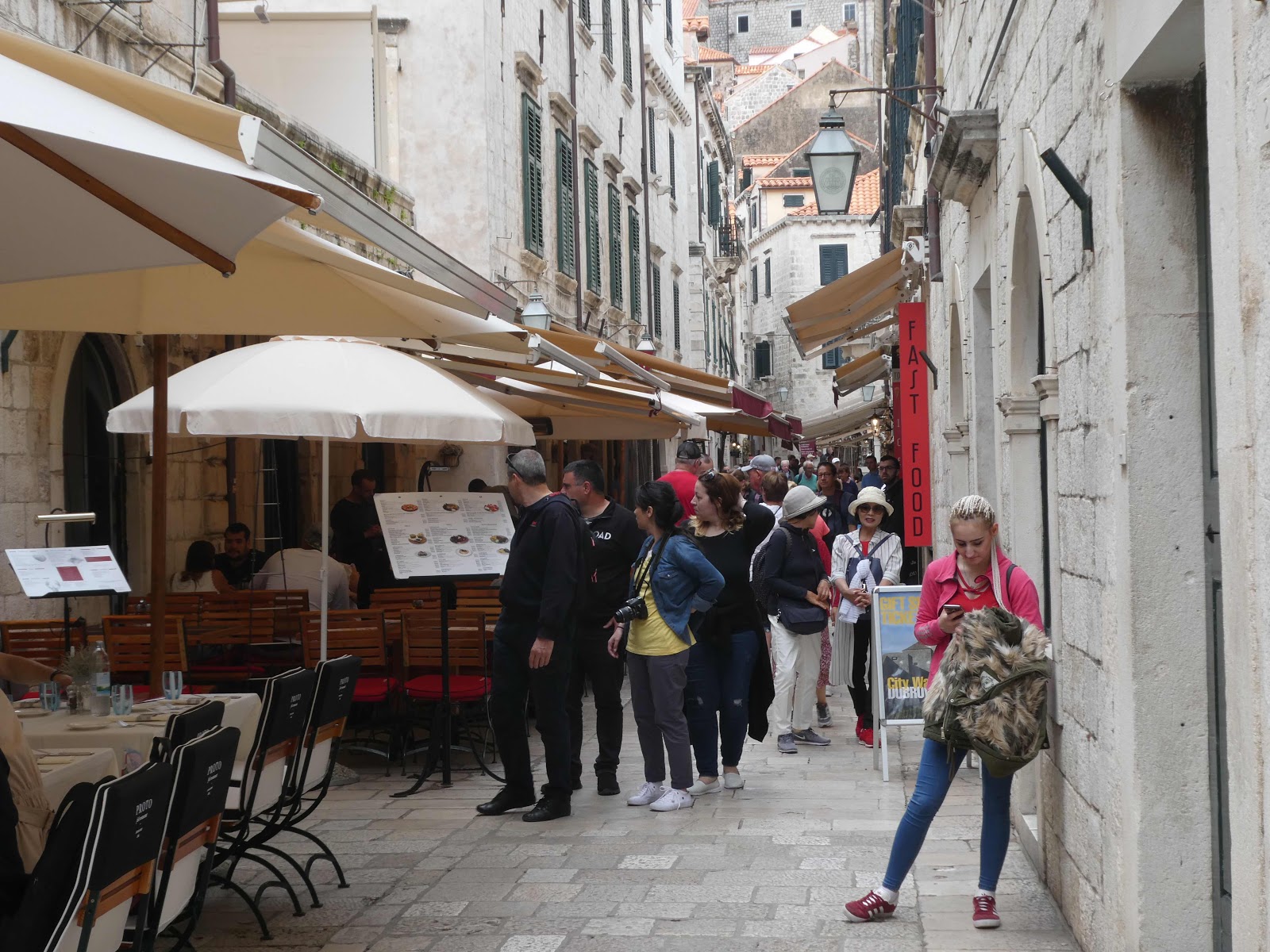 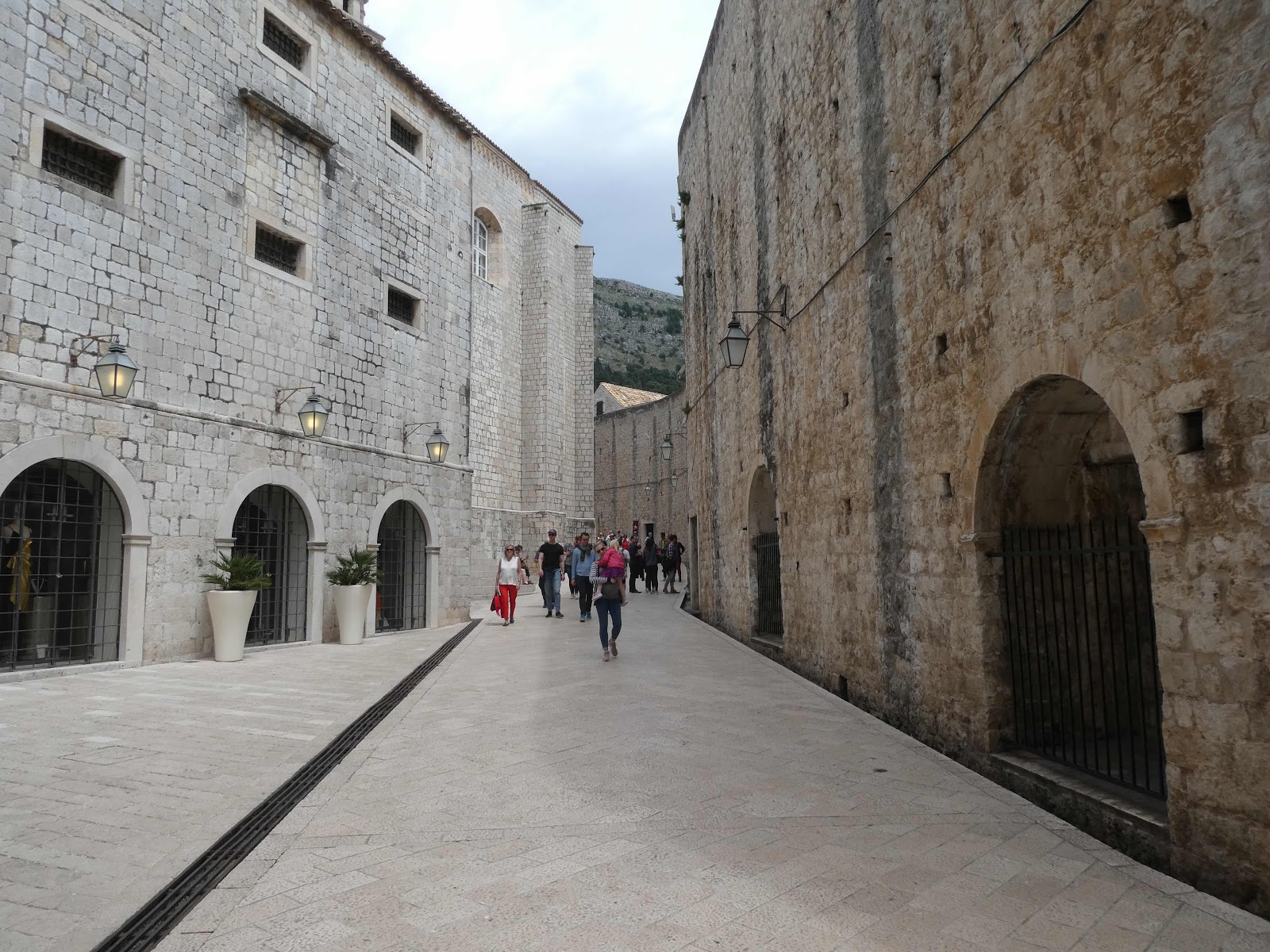 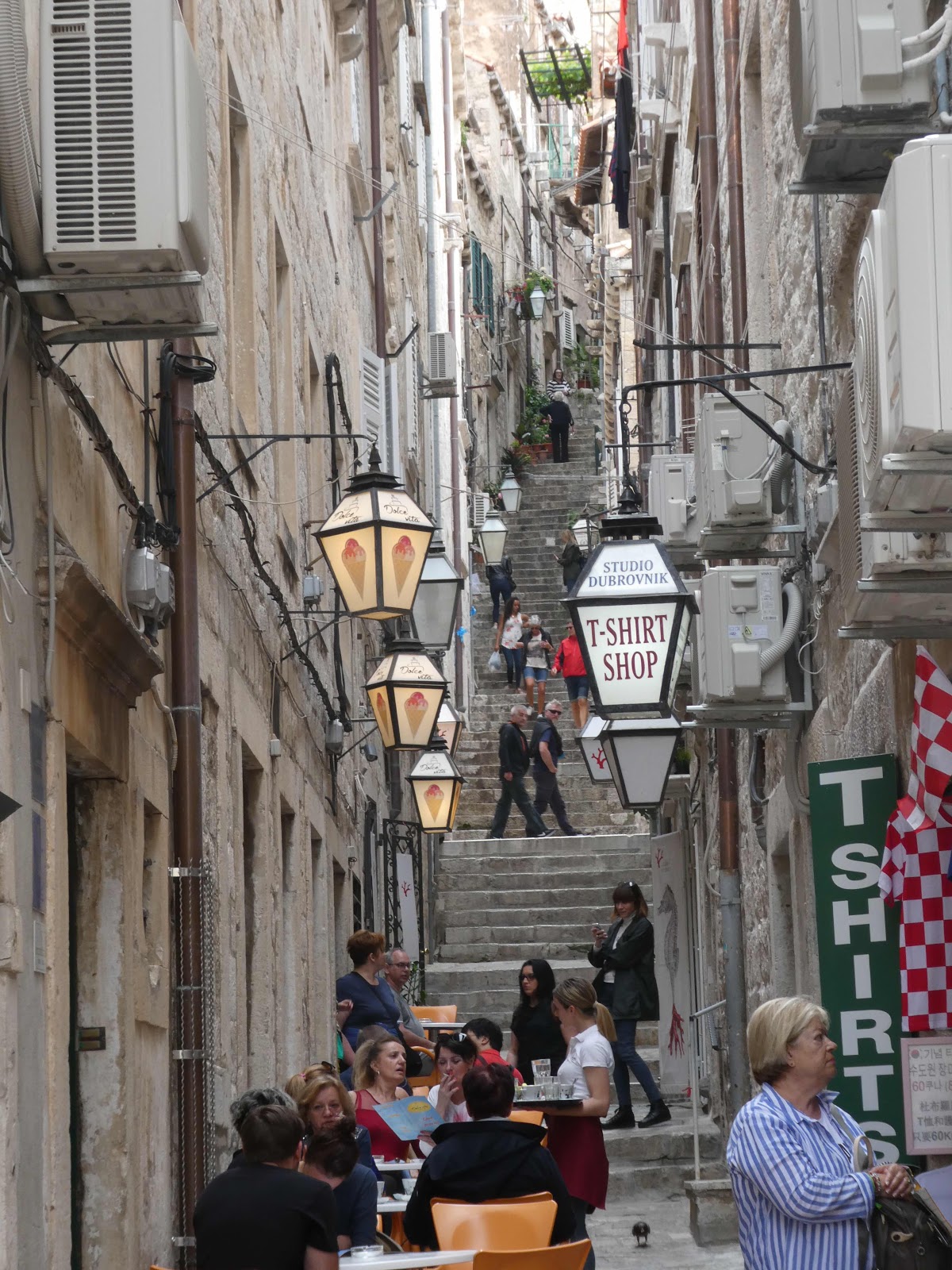 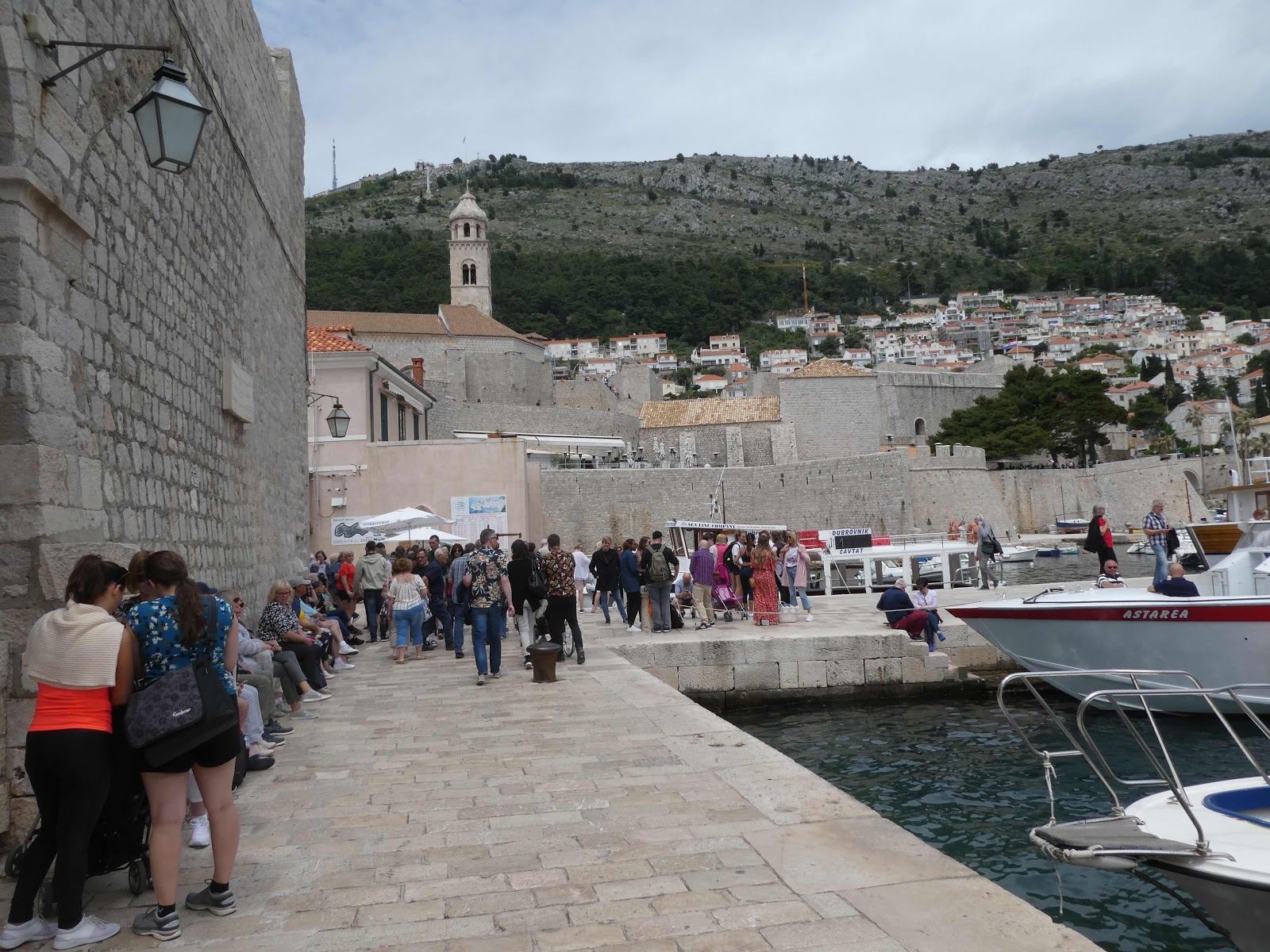 The modern black and white hotel is this photo is the Excelsior where Penny and I stayed on our last visit. 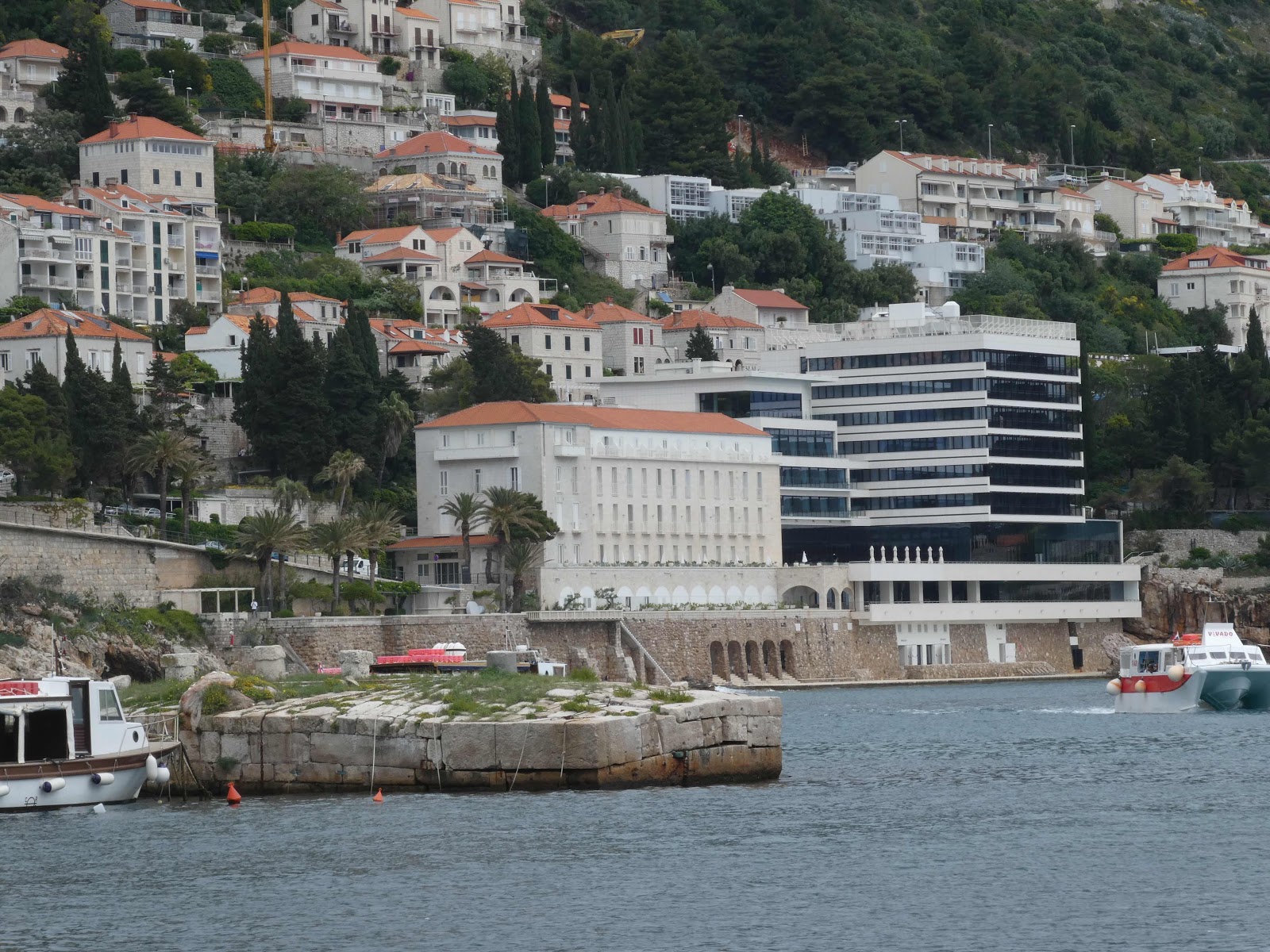 There is a lovely story behind this photo.  We were standing beside a big church.  The men used to go into the lower part of the church and the ladies were sent upstairs.  The choir boys used to stand by these steps and look at the ladies ankles as they walked up the steps!  The barrier between the spindles were put in for the sake of the ladies modesty! 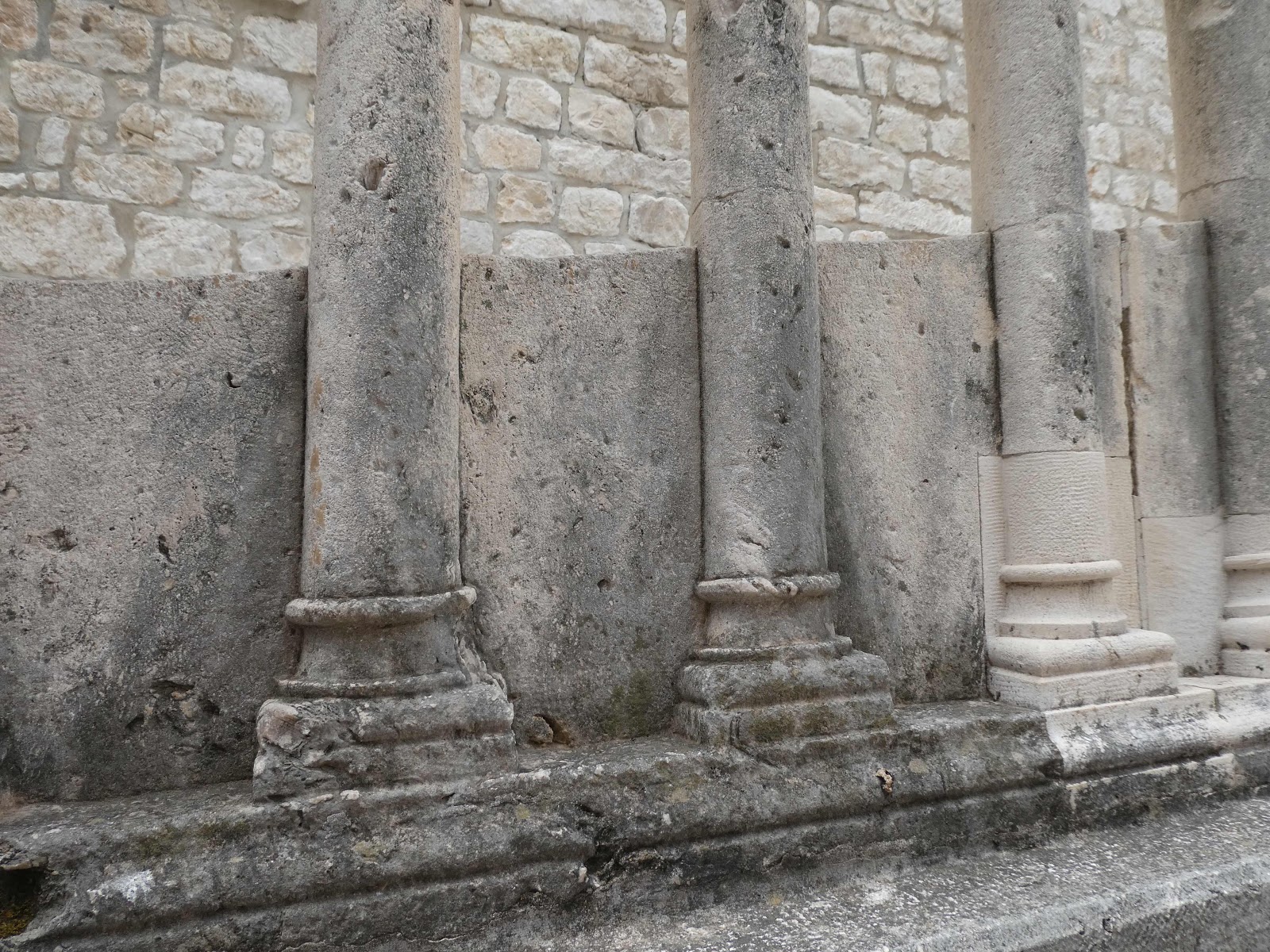 Toni left us and we looked for somewhere for lunch but everywhere was so busy, eventually we found somewhere in a back street where we had a beer and a toasted sandwich.

Pudding was to be an ice cream from, according to Toni, the best gelato in Dubrovnik.  We had no sooner got our ice creams when the rain started and it poured.  Richard and I had waterproofs but Penny and Jim had to huddle under an umbrella. 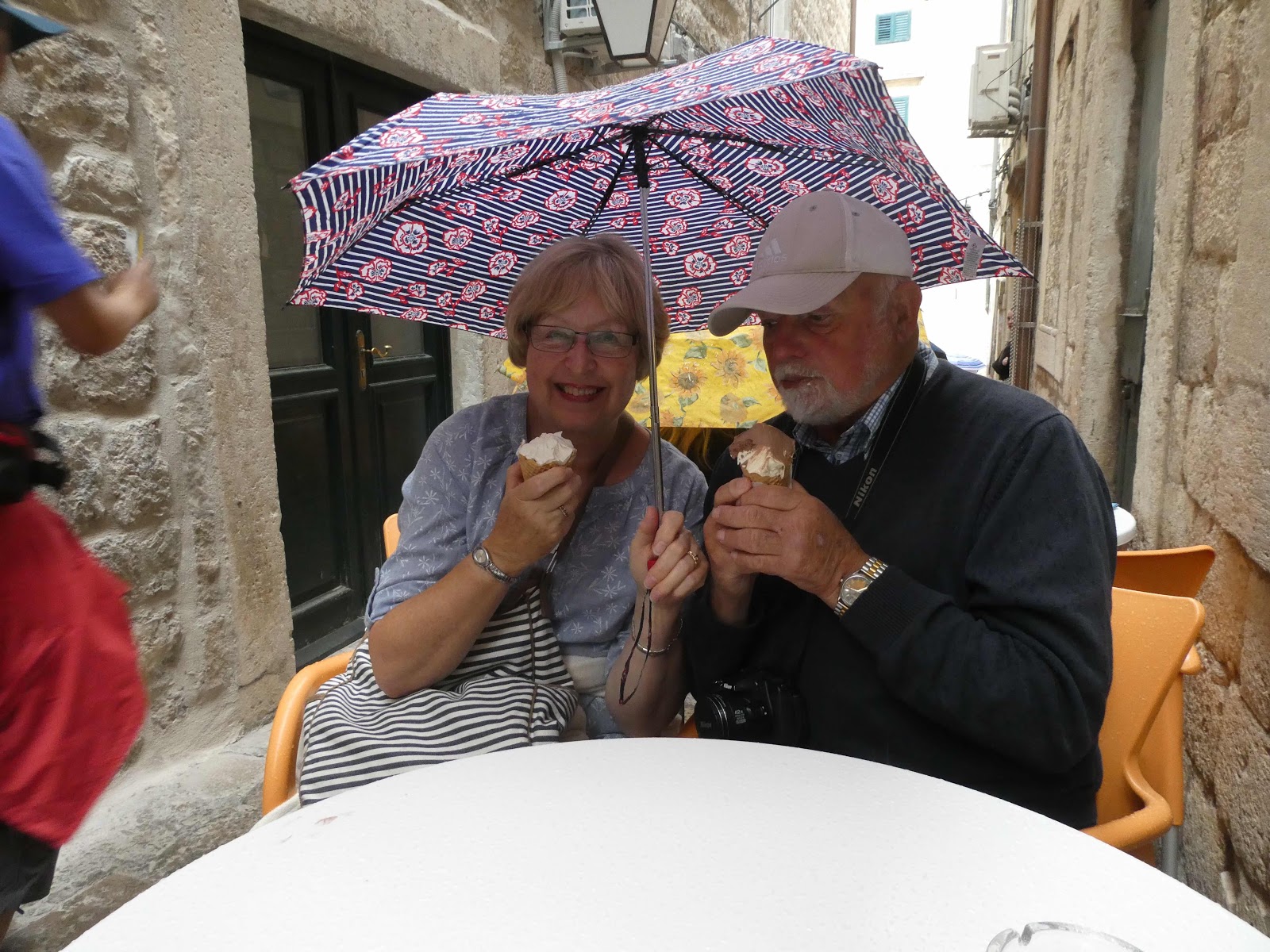 Sadly our time in Dubrovnik old town was up and we had to meet a new driver who would take us to the ship.  We waited for ages in the pouring rain until Ivo II arrived.

It was then back to the ship where we enjoyed a well earned rest.  We tried Gallery 47, the Italian restaurant tonight.  It was excellent - we will be back.  As we wandered around there was a singer, Matthew Ibbottson, singing in the Atrium.  We stopped to listen however the men got bored and went to bed.  As Matthew finished singing Penny realised that the show was about to start so we went to give it a try.  The show was called Steel City which was a take on the Full Monty.  It was very good indeed and finished just like the film with the full monty!  As we went to leave Penny tripped and went flying, fortunately she wasn’t too badly hurt but did graze her arm and hurt her knee.

Posted by Linda Gifford-Hull at 15:28