We had booked a small tour to go from Koper to Lake Bled and Ljubljana.  My Mother (and Penny’s of course!) had always wanted to visit Lake Bled and often talked about it so when we discovered how close we were going to be, we decided to make a visit.

We had to meet our driver at 9am only to find that there was going to be six of us.  We waited for 30 minutes but the other two didn’t turn up so we left without them (they had paid for the trip!)

Our driver was Maurizio and we also had a trainee guide, Pedro from Portugal, with us.  We drove out of Koper and up towards the Alps.  Maurizio had, there is no other word for it, verbal diarrhoea!!  He kept jumping from one subject to another but we got the information eventually!  He said at one stage that he was hyper-active - he wasn’t kidding.

We learnt that Slovenia has a population of 2.07 million and covers 7,827 square miles.  The main industries are motor vehicles, electric and electronic equipment, machinery, pharmaceuticals, and fuels.  The country and its people expect perfection all the time from everything they do.  With the Alps and the Adriatic in Slovenia, it is said that you can ski in the morning and swim in the sea in the afternoon!

Lake Bled was a lot smaller than I imagined.  The way my Mother enthused about it I imagined it to be a lot bigger than it actually is.  It is in a beautiful setting and the lovely church on an island is a picture postcard. 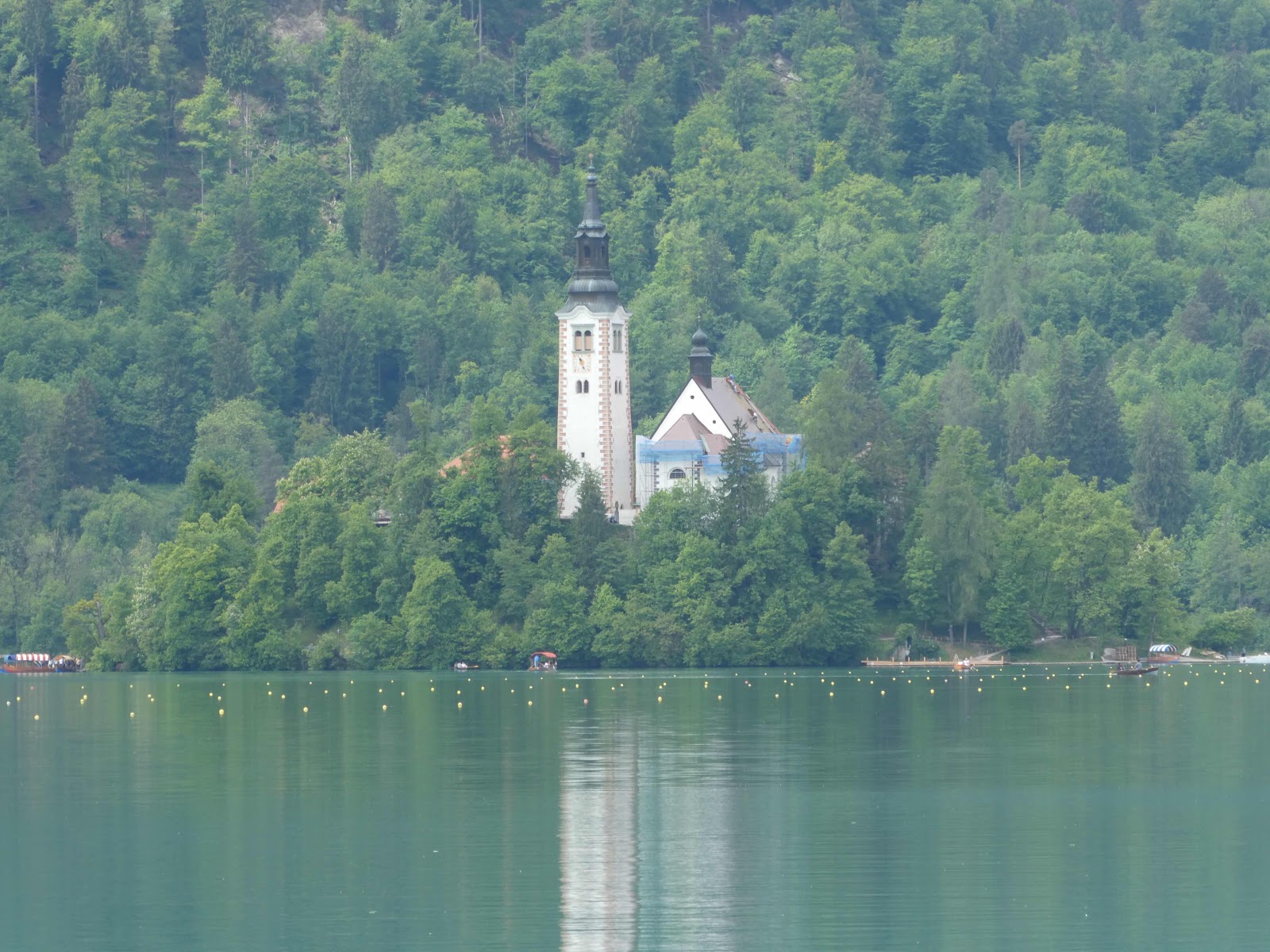 The building on the island is the pilgrimage church dedicated to the Assumption of Mary.  It built in its current form near the end of the 17th century, and decorated with remains of Gothic frescos from around 1470.  The church has a 171 foot tower and there is a Baroque stairway dating from 1655 with 99 stone steps leading up to the building. The church is frequently visited and weddings are held there regularly. Traditionally it is considered good luck for the groom to carry his bride up the steps on the day of their wedding before ringing the bell and making a wish inside the church.

The traditional transportation to Bled Island is a wooden boat known as a pletna.  Some sources claim the pletna was used in Lake Bled as early as 1150 AD, but most historians date the first boats to 1590 AD.  Similar in shape to Italian gondolas, a pletna seats 20 passengers. Modern boats are still made by hand and are recognizable by their colorful awnings. Plenty oarsman employ the stehrudder technique to propel and navigate boats across the lake using two oars. The role of the oarsman dates back to 1740, when Empress Maria Theresa granted 22 local families exclusive rights to ferry religious pilgrims across Lake Bled to worship on Bled Island.  The profession is still restricted. Many modern oarsman descend directly from the original 22 families. 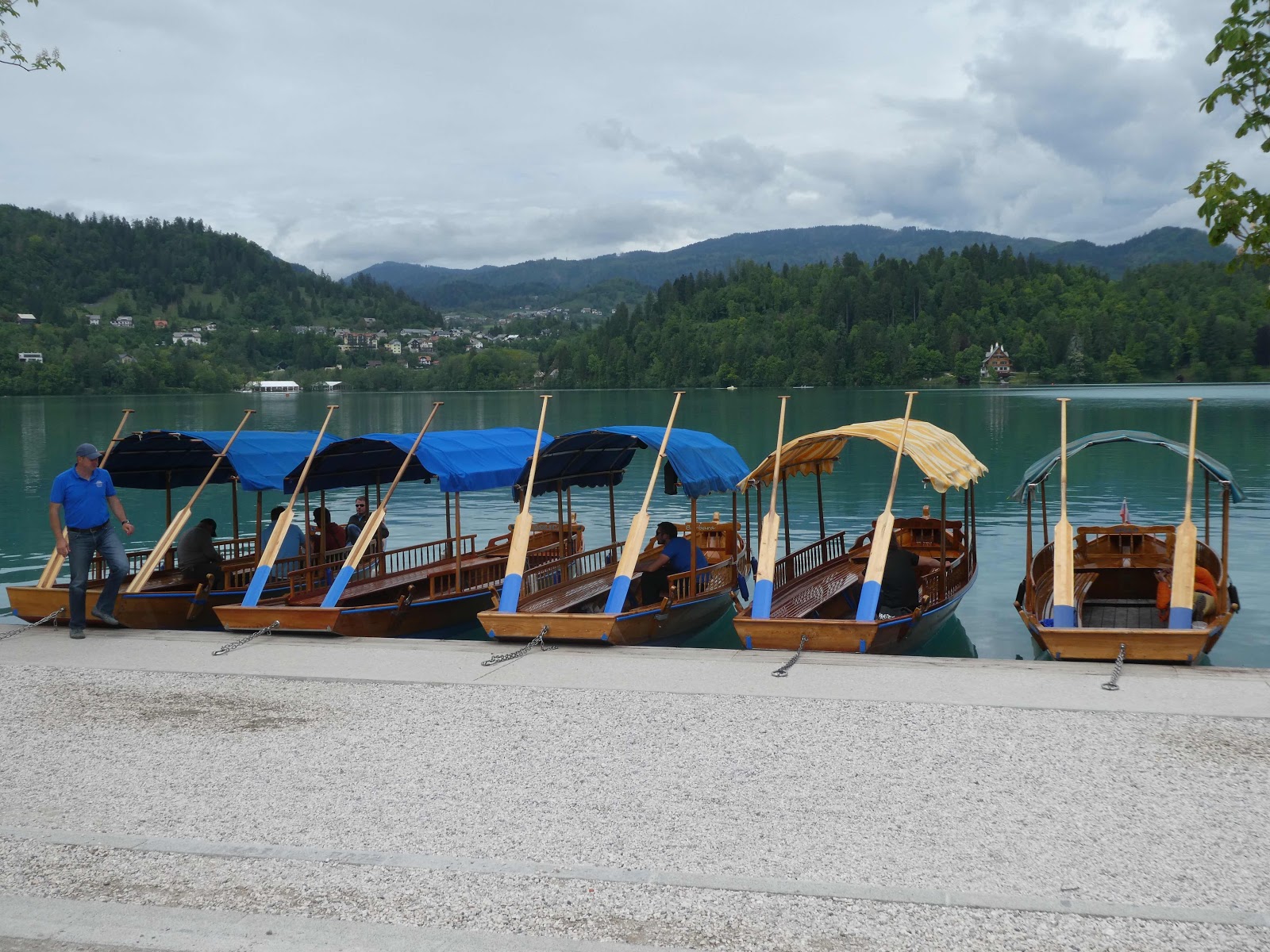 High up above the lake is Bled Castle.  According to written sources, it is the oldest Slovenian castle and is currently one of the most visited tourist attractions in Slovenia.  The castle was first mentioned in a 22 May 1011 deed of donation issued by Emperor Henry II in favour of the Bishops of Brixen. 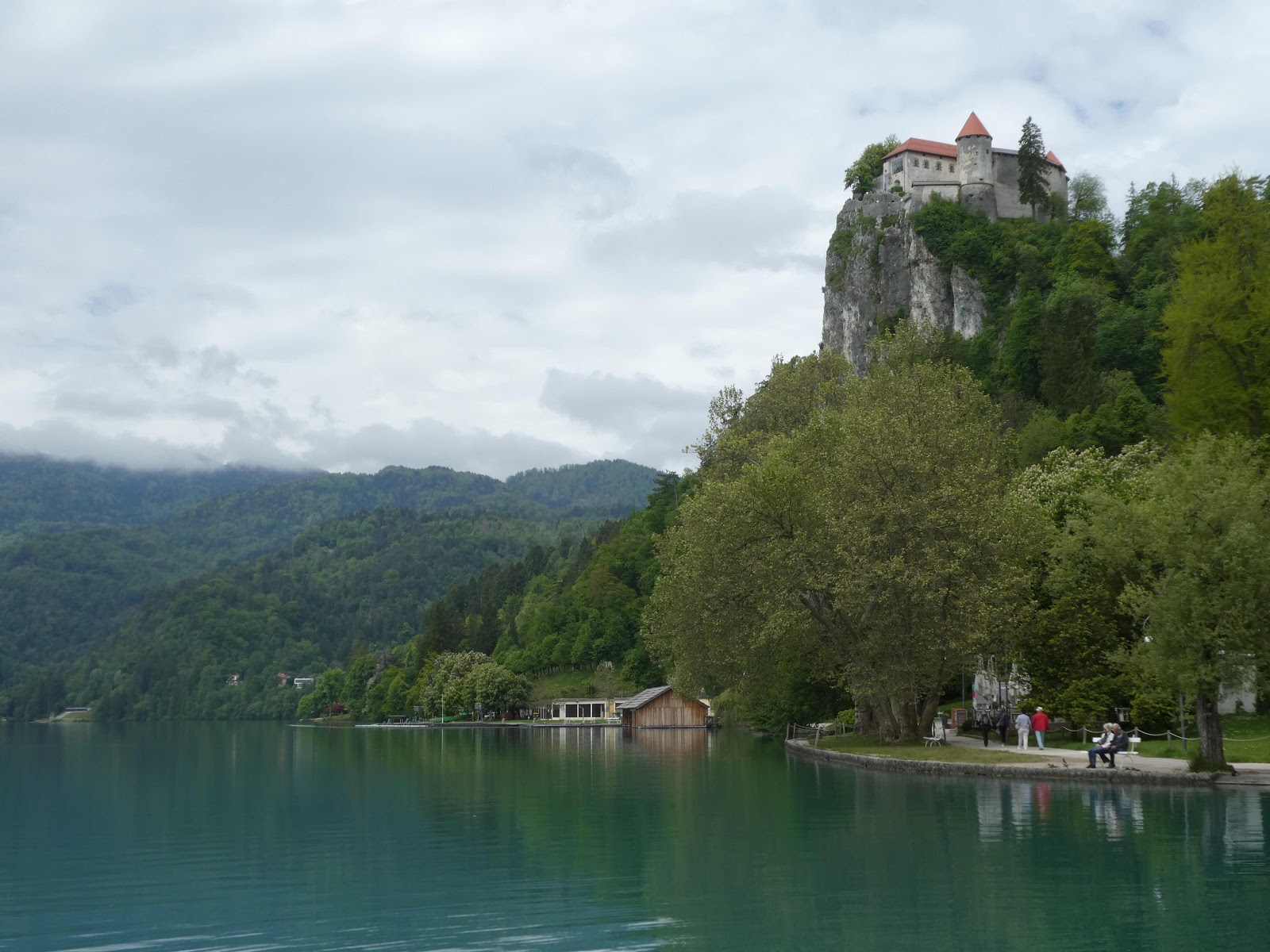 We had to have the area's culinary specialty, a cream pastry which was designated a protected dish of designated origin in 2016 by the Slovene government.  Although various Slovene cream pastries date back to the Habsburg era, the current "official" recipe was created in 1953 by Ištvan Lukačević, the former manager of the Hotel Park's patisserie.  There is an annual festival dedicated to the pastry. It is estimated that 12 million cream pastries have been prepared at the Hotel Park’s patisserie over the last 60 years.  It was absolutely delicious. 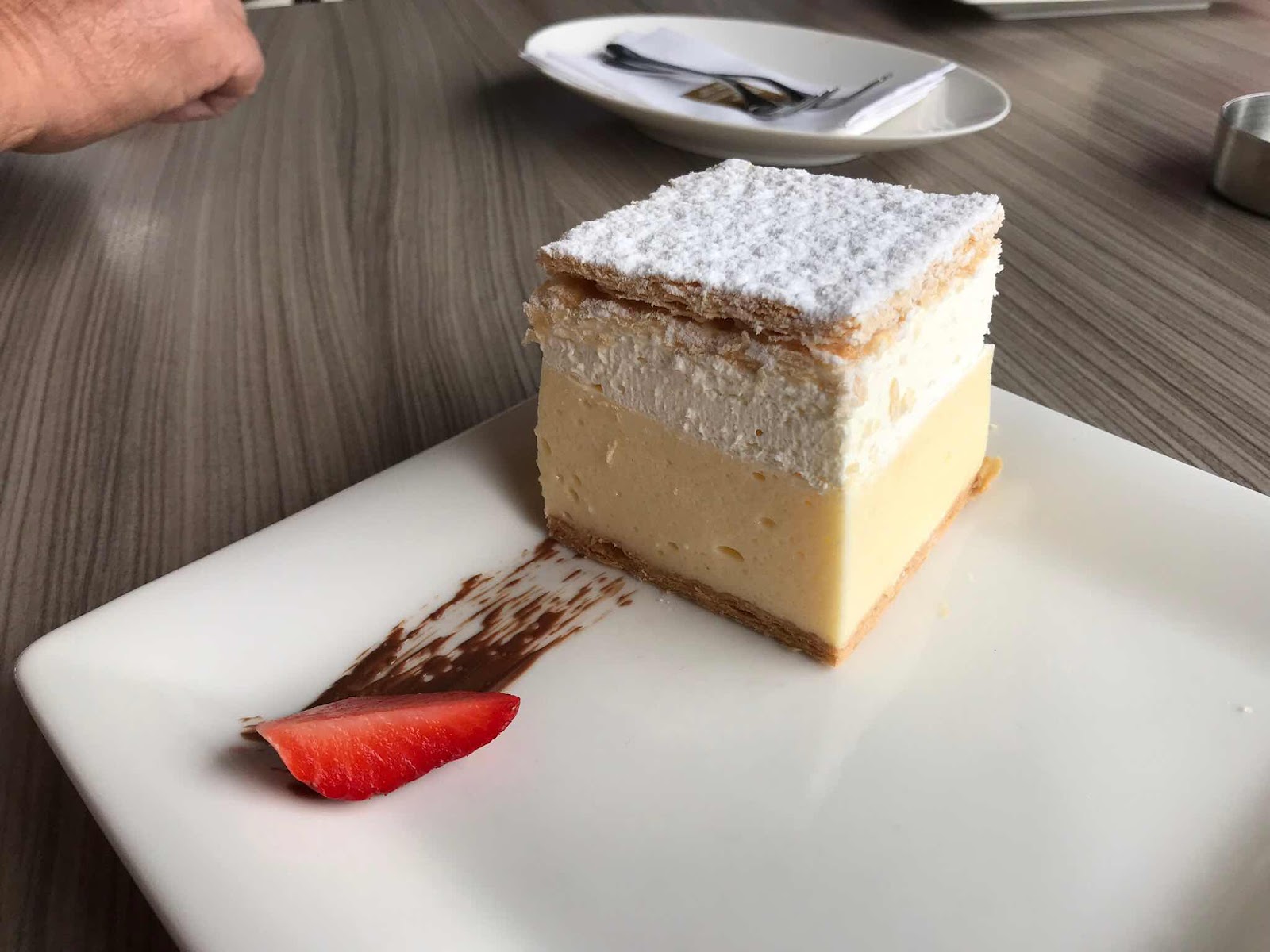 There is another church in the village of Bled - the present neo-Gothic church, consecrated to St. Martin.  This was built in 1905 on the site of the previous Gothic church dating from the 15th century, although the very first chapel was erected here before the year 1000. 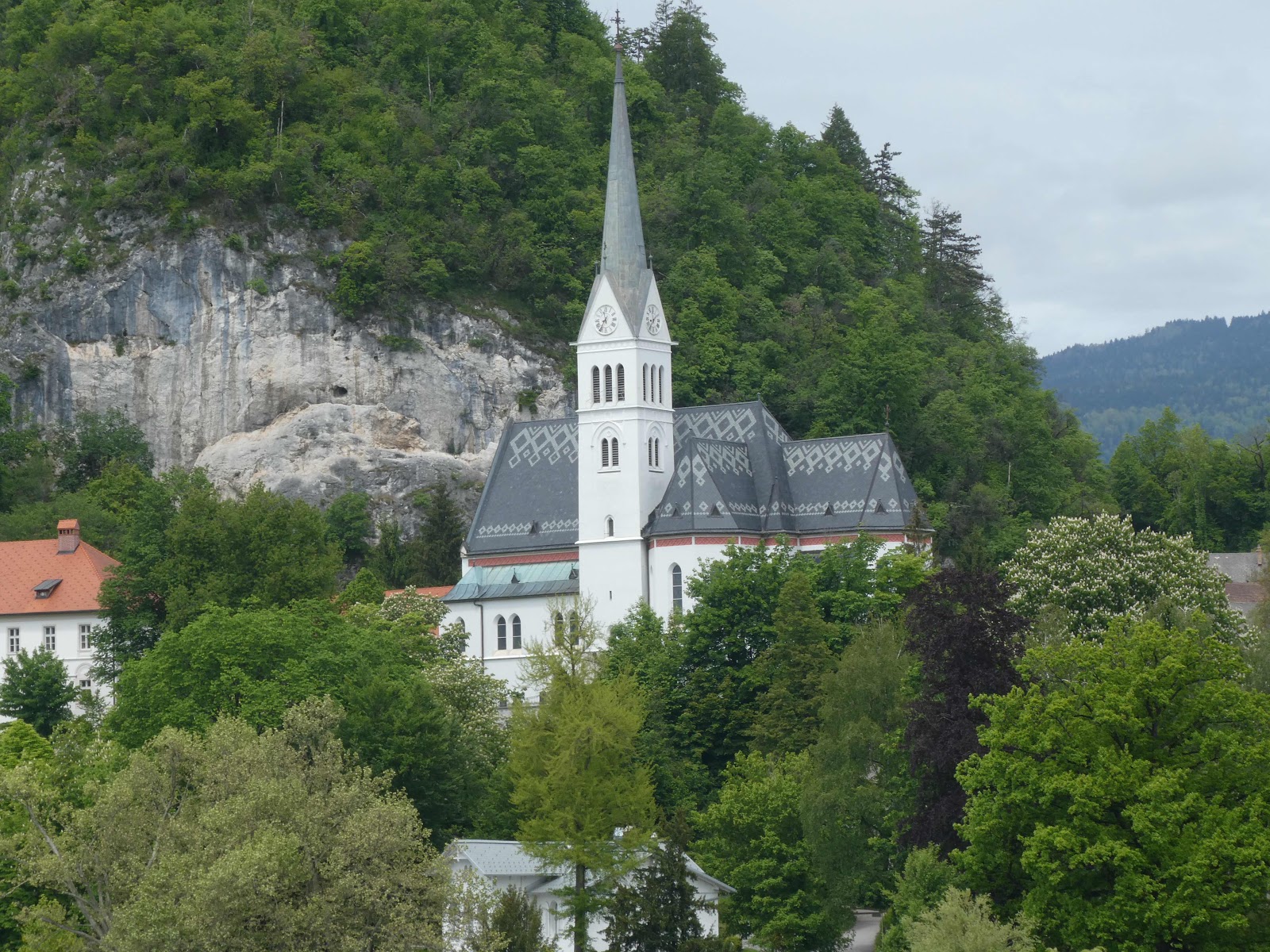 From Lake Bled we headed to Ljubljana, the capital of Slovenia, though we made a brief detour to see the Basilica of St. Mary in Brezje where people go to be healed.  Many people have visited the church and have been healed. 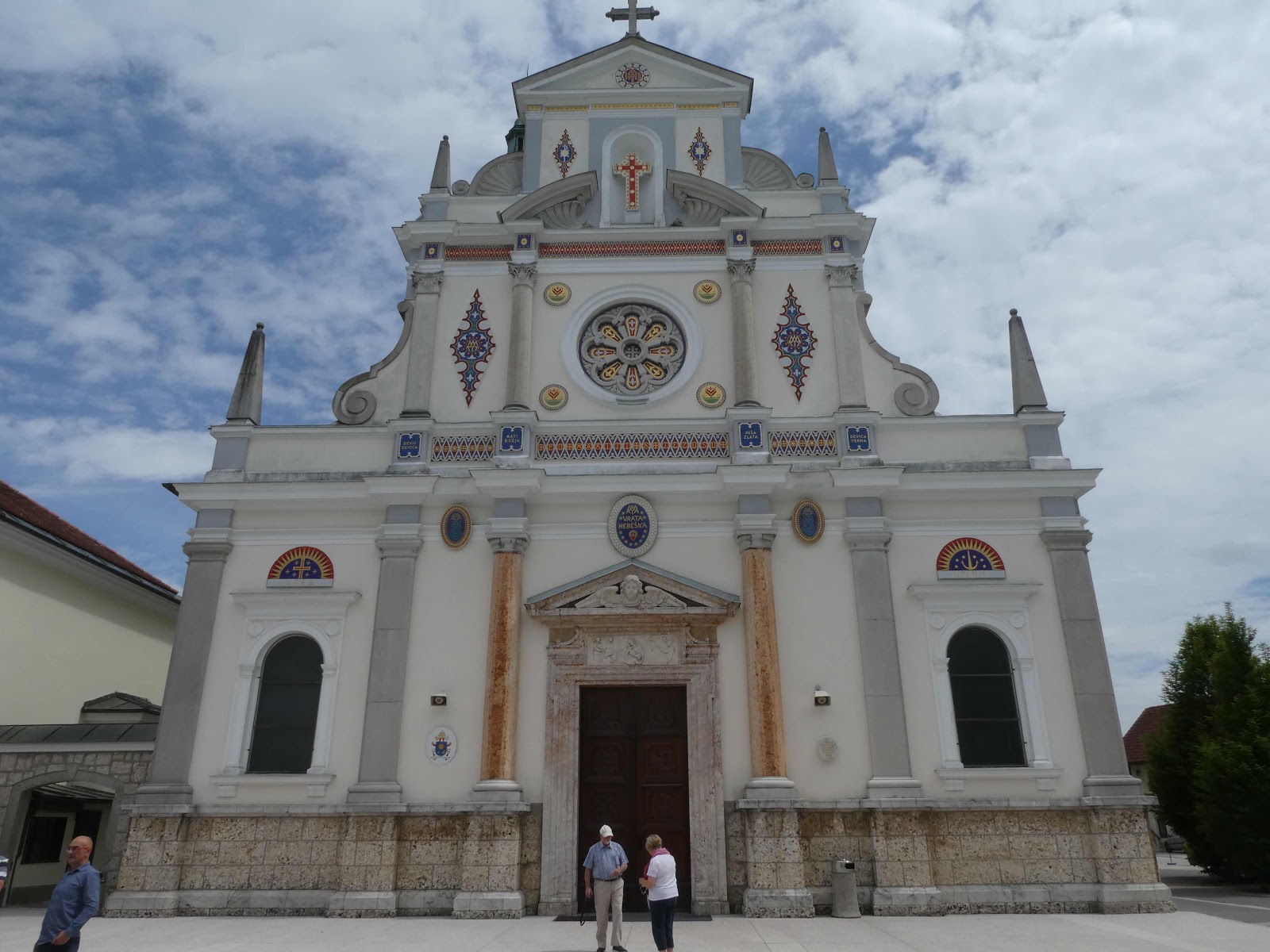 We arrived in Ljubljana feeling extremely hungry.  We had had an early start and it was well gone 1pm.  Maurizio kept on talking about special sausages which we just HAD to try - we weren’t keen!  The centre of the city is now pedestrianised with only bicycles and golf carts, often used as taxis, allowed in.  It does make a small city like Ljubljana so more “user friendly”.  The city's architecture is a mix of styles. Despite the appearance of large buildings, especially at the city's edge, Ljubljana's historic centre remains intact. Although the oldest architecture has been preserved from the Roman period, Ljubljana's downtown got its outline in the Middle Ages.  After an earthquake in 1511 it was rebuilt in the Baroque style  following Italian, particularly Venetian, models. After another quake in 1895, it was once again rebuilt, this time in the Vienna Secession style, which today is juxtaposed against the earlier Baroque style buildings that remain.  We finally found the sausage cafe but there was no where to sit (phew!) so we ended up sharing a couple of large pizzas.  These photos are some I took on our, all to brief, visit. 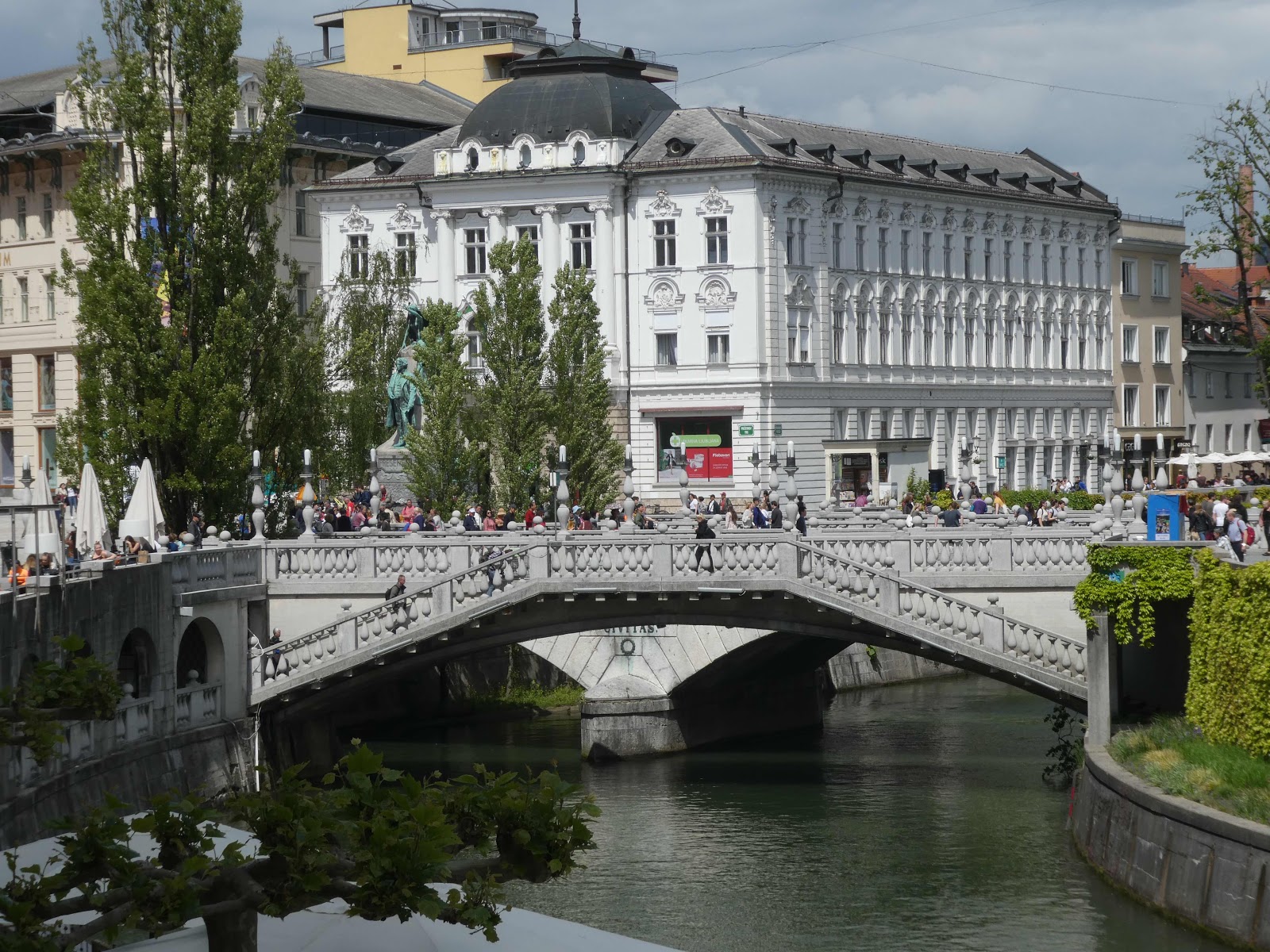 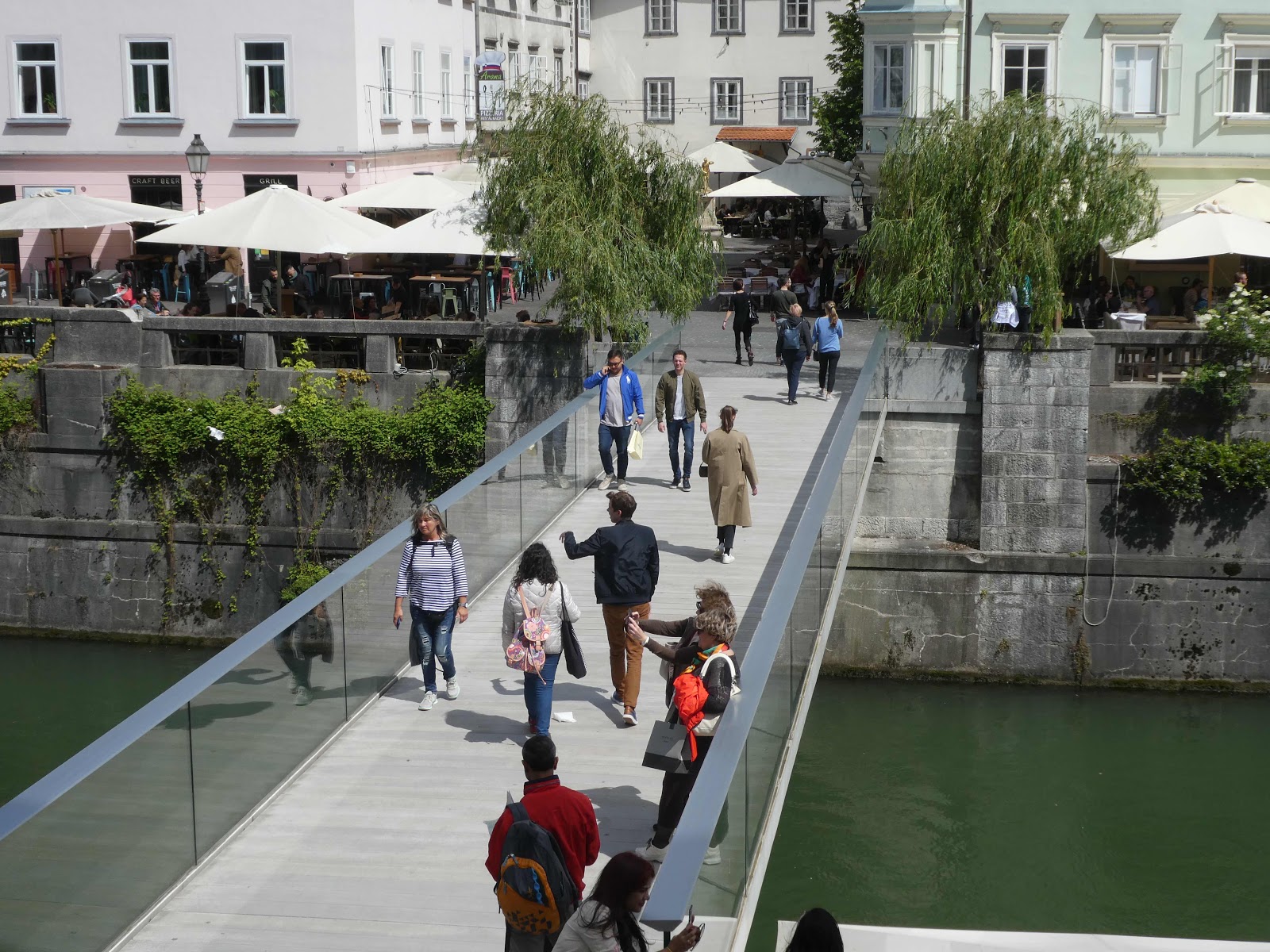 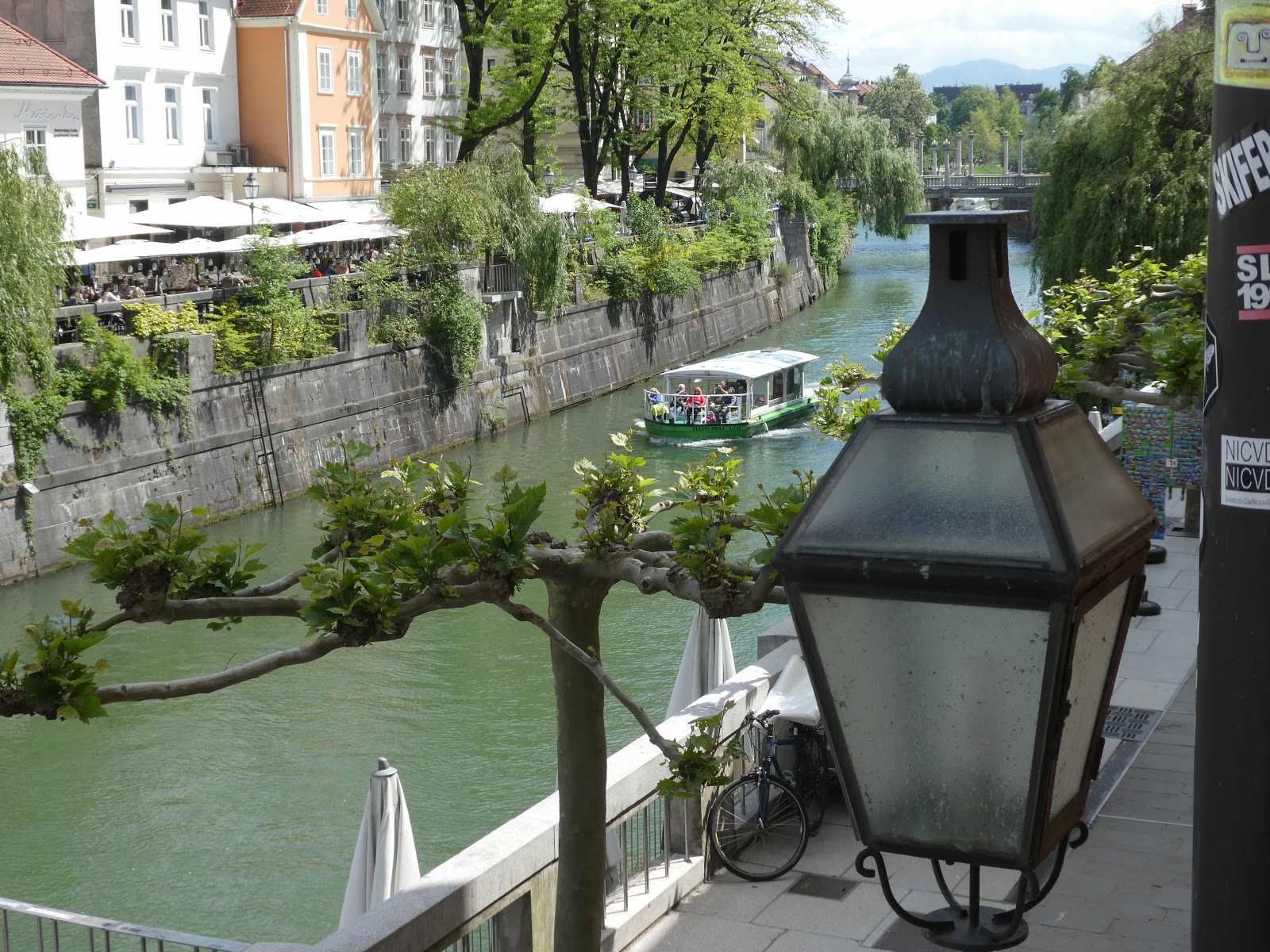 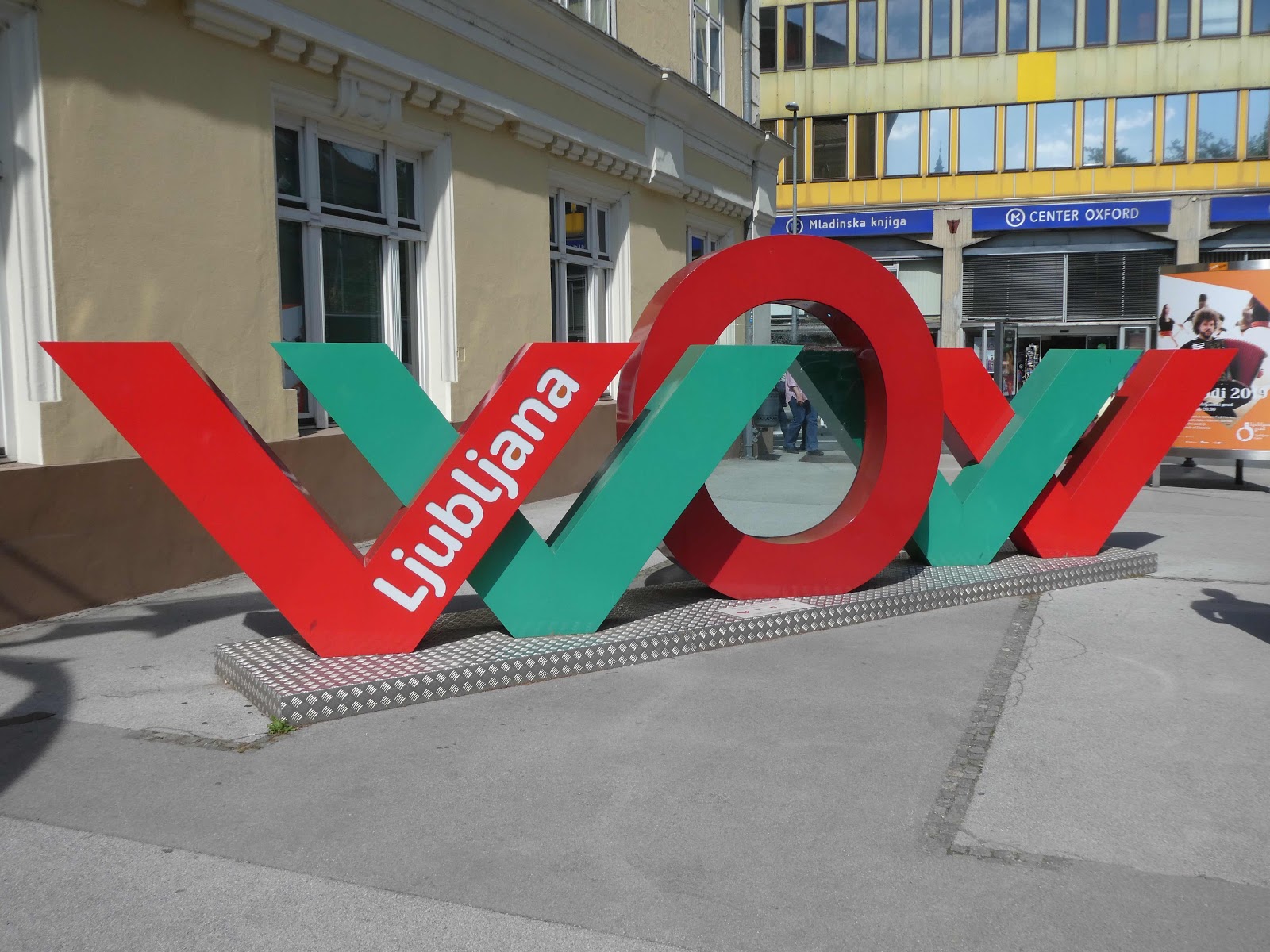 We had to meet Maurizio at the Dragon bridge which was built in 1901.  The symbol of the city is the Ljubljana Dragon which is depicted on the top of the tower of Ljubljiana Castle in the Ljubljana coat of arms as well as on the bridge.  It symbolises power, courage, and greatness. 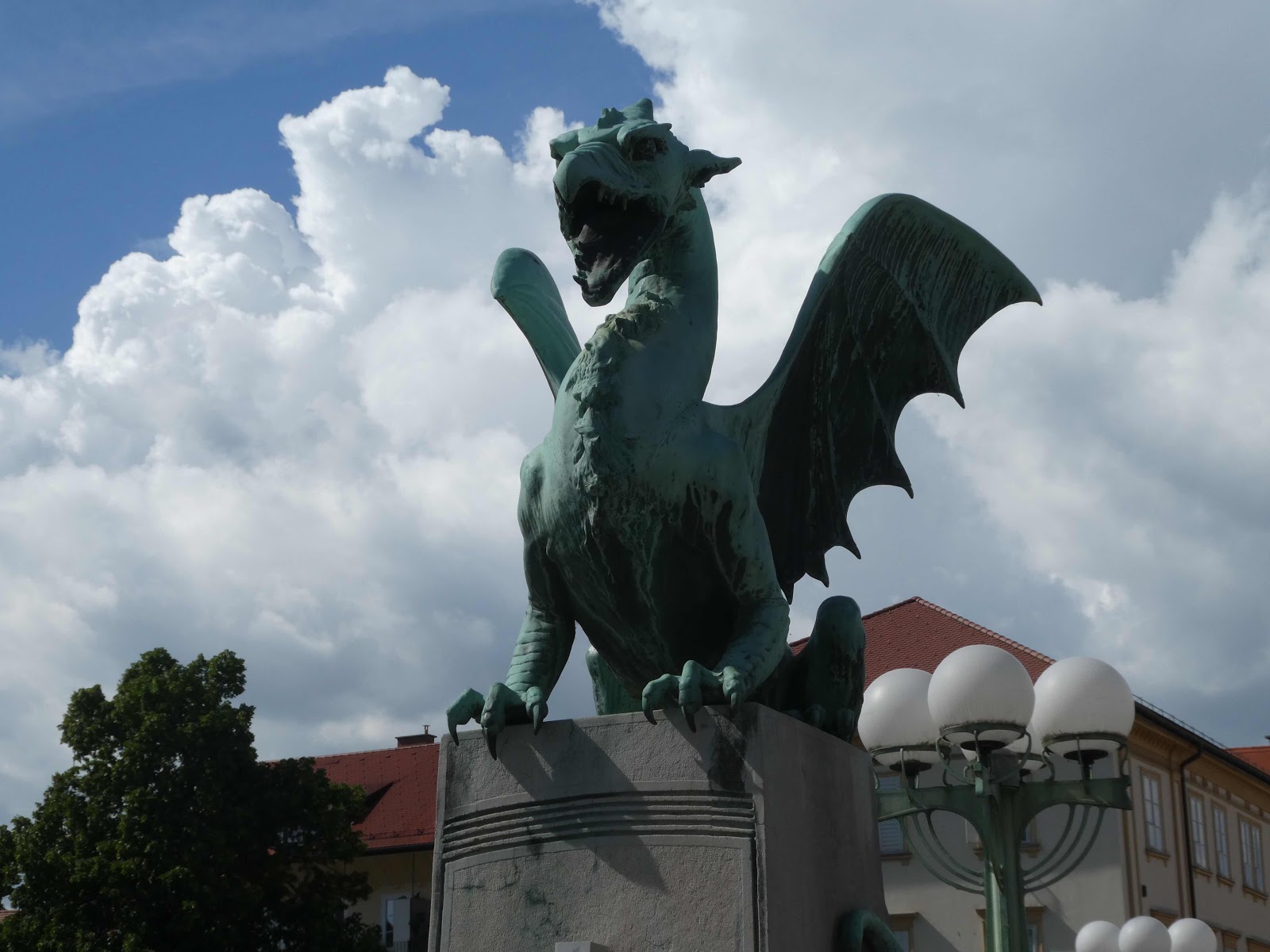 We had a peaceful drive back to Koper - I think I slept most of the way!

Back on the ship we had our regulation rest before having dinner.

We had a very lazy day doing as little as possible - all this sightseeing is tiring!
Posted by Linda Gifford-Hull at 13:34