We woke up back in Corfu after our restful sea day - we did need it as it had been pretty full on!

We had another private tour round the Island with our driver, Spyros in his beautiful Mercedes people carrier.

Corfu’s cultural heritage reflects years spent under Venetian, French and British rule before it was united with Greece in 1864. Corfu Town, flanked by 2 imposing Venetian fortresses, features winding medieval lanes, a French-style arcade and the grand Palace of St. Michael and St. George.

The Greek name, Kerkyra or Korkyra is related to two powerful water deities: Poseidon, god of the sea, and Asopos, an important Greek mainland river.  According to myth, Poseidon fell in love with the beautiful nymph Korkyra, daughter of Asopos and river nymph Metope, and abducted her.  Poseidon brought Korkyra to the hitherto unnamed island and, in marital bliss, offered her name to the place: Korkyra, which gradually evolved to Kerkyra. They had a child they called Phaiax.  Corfu's nickname is the island of the Phaeacians.

As we drove out of Corfu town we could see that this was not a wealthy island.  The main economy of the island is tourism with a small amount of agriculture.  The island is 236 square miles and has about 102,000 people permanently living on it.

Part of the agriculture are olive trees and vines.  The olive trees are much taller than the ones I have seen in Spain and Italy.  They lay nets under the trees to collect the olives when they fall as they feel that olives that fall naturally are the best though the “tree shaking” machines are beginning to find their way onto Corfu.

Our first port of call was to a spot where we could see right over Agios Georgios beach. 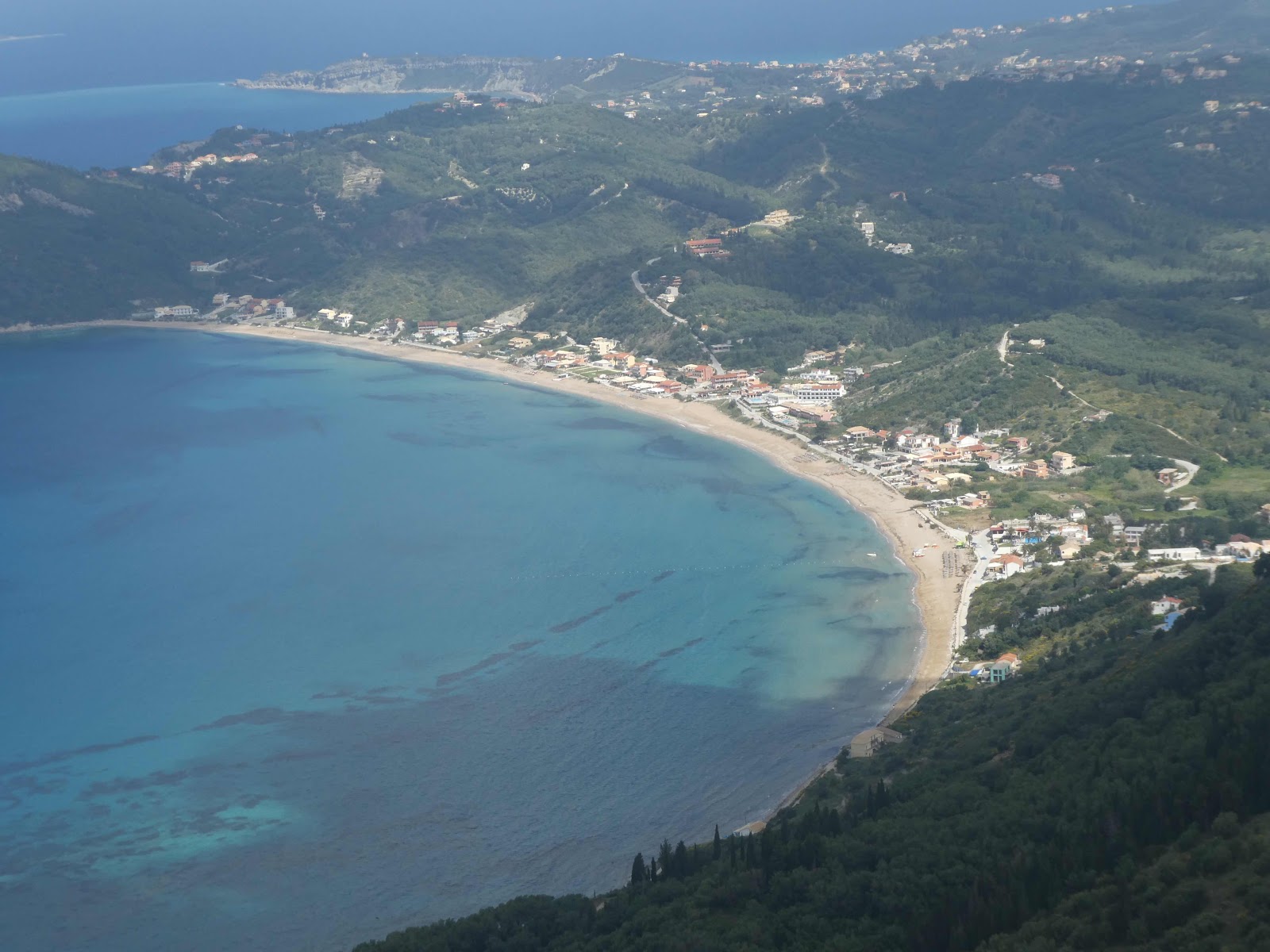 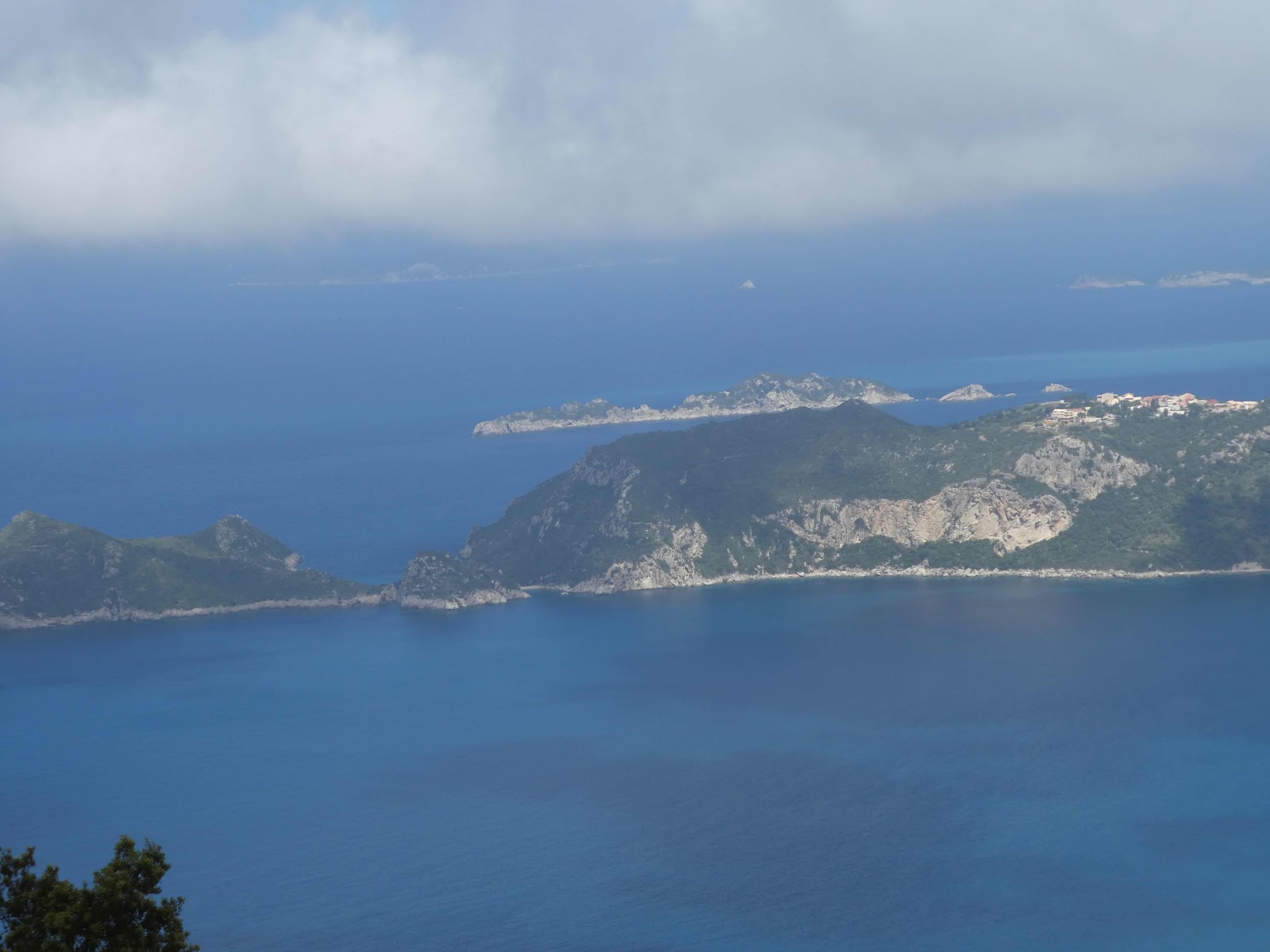 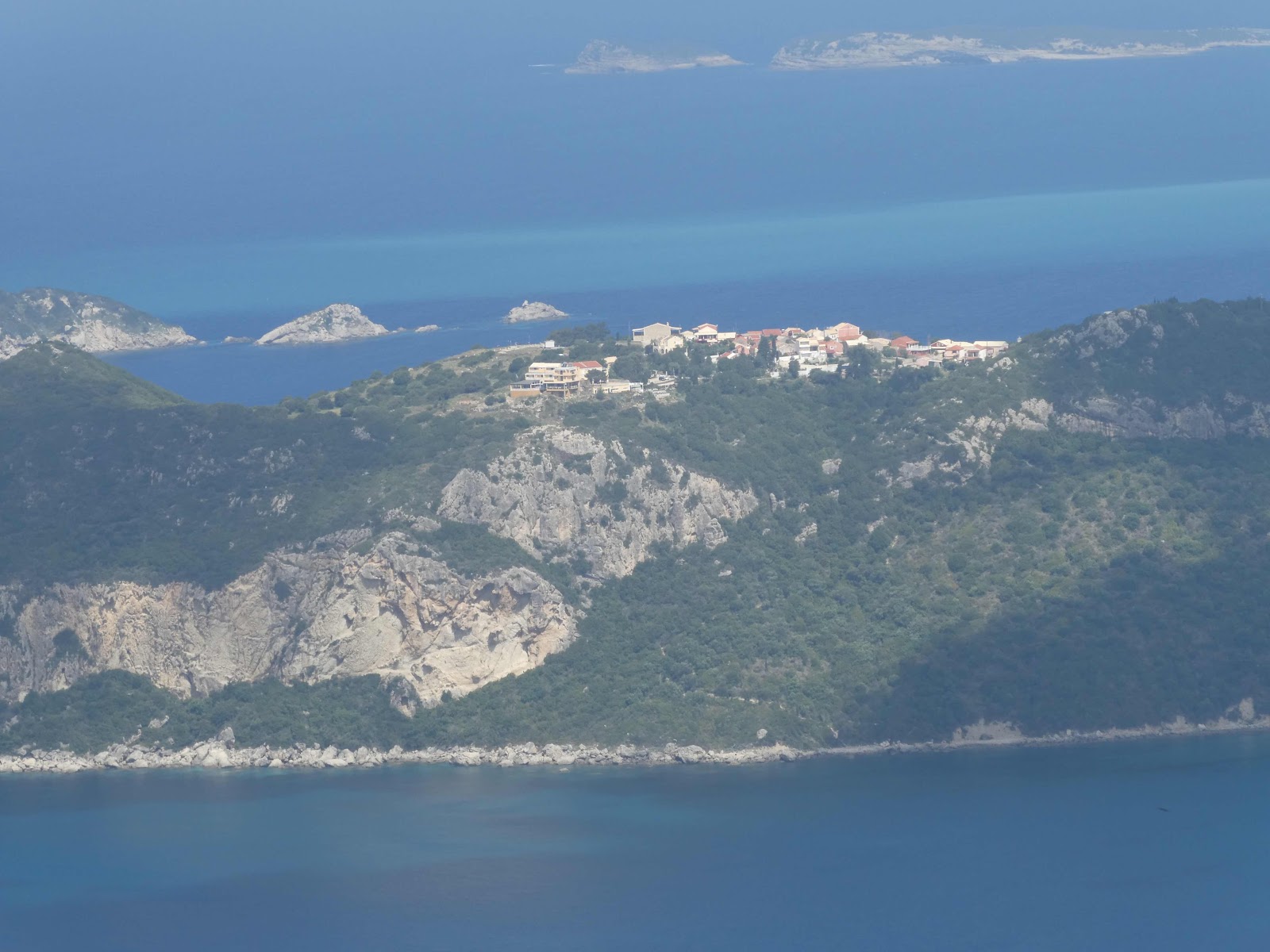 We stopped for a coffee at the Golden Fox at Lacones which has the most amazing view over the beach at Paleokastitsa. 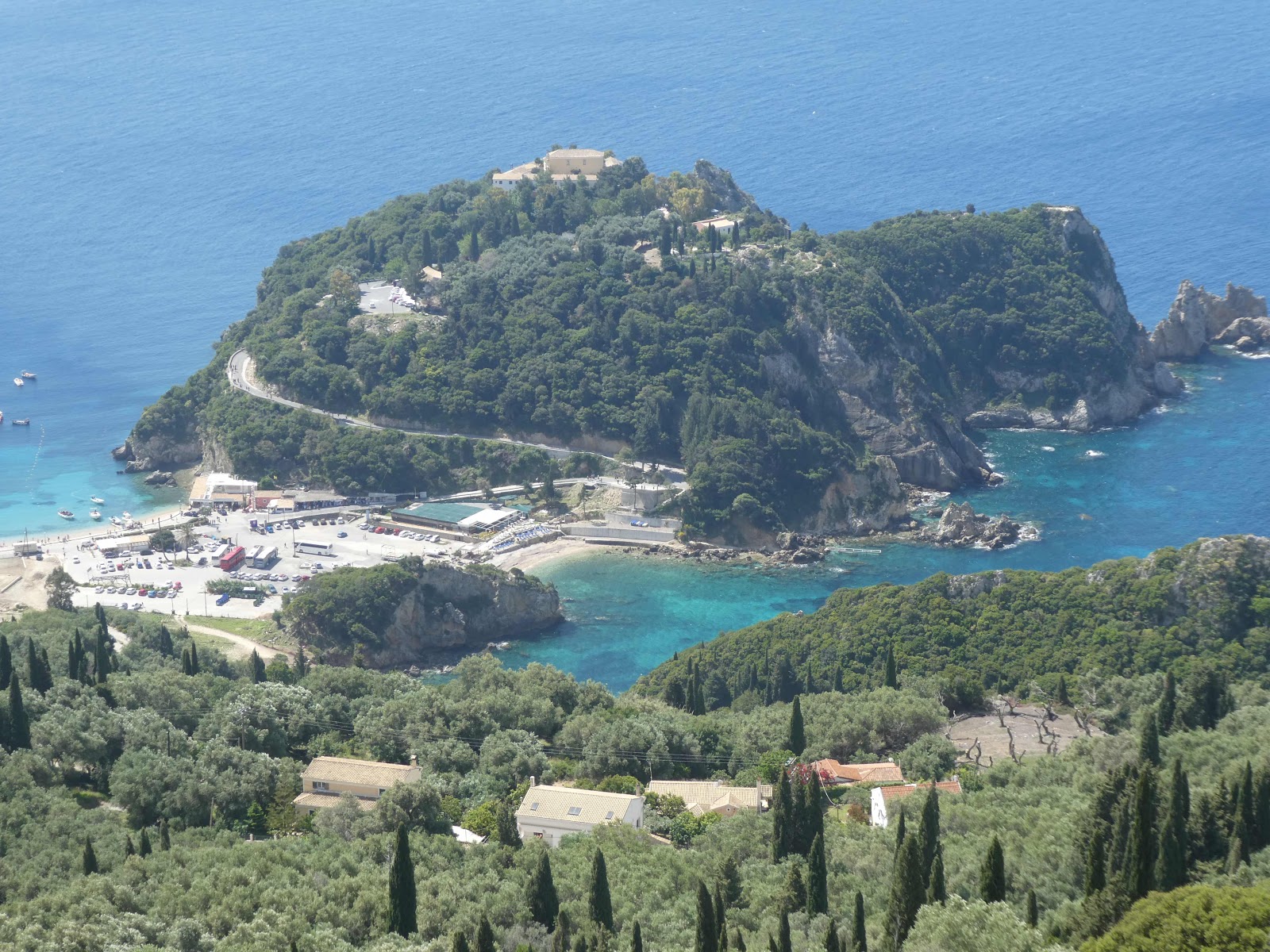 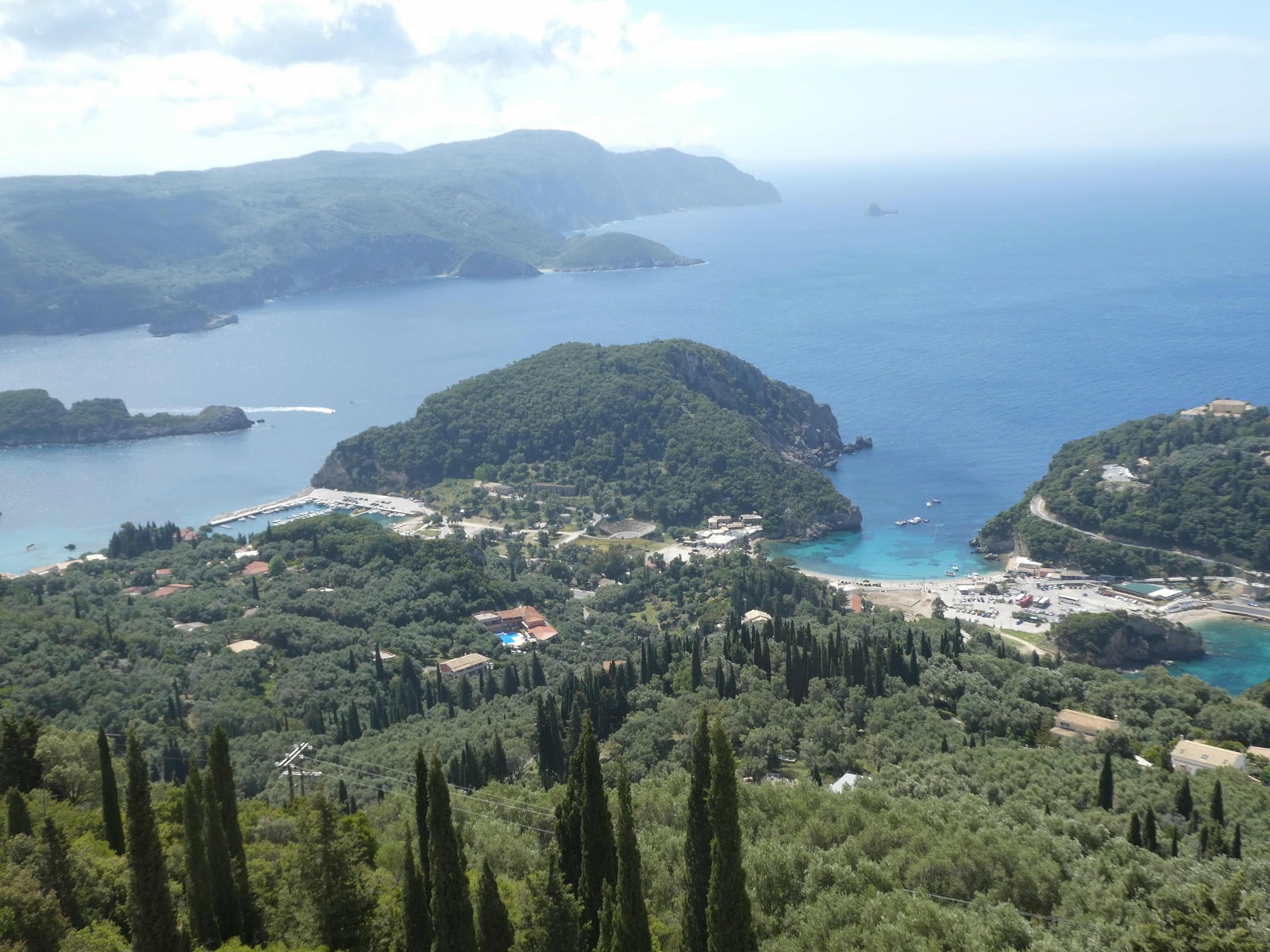 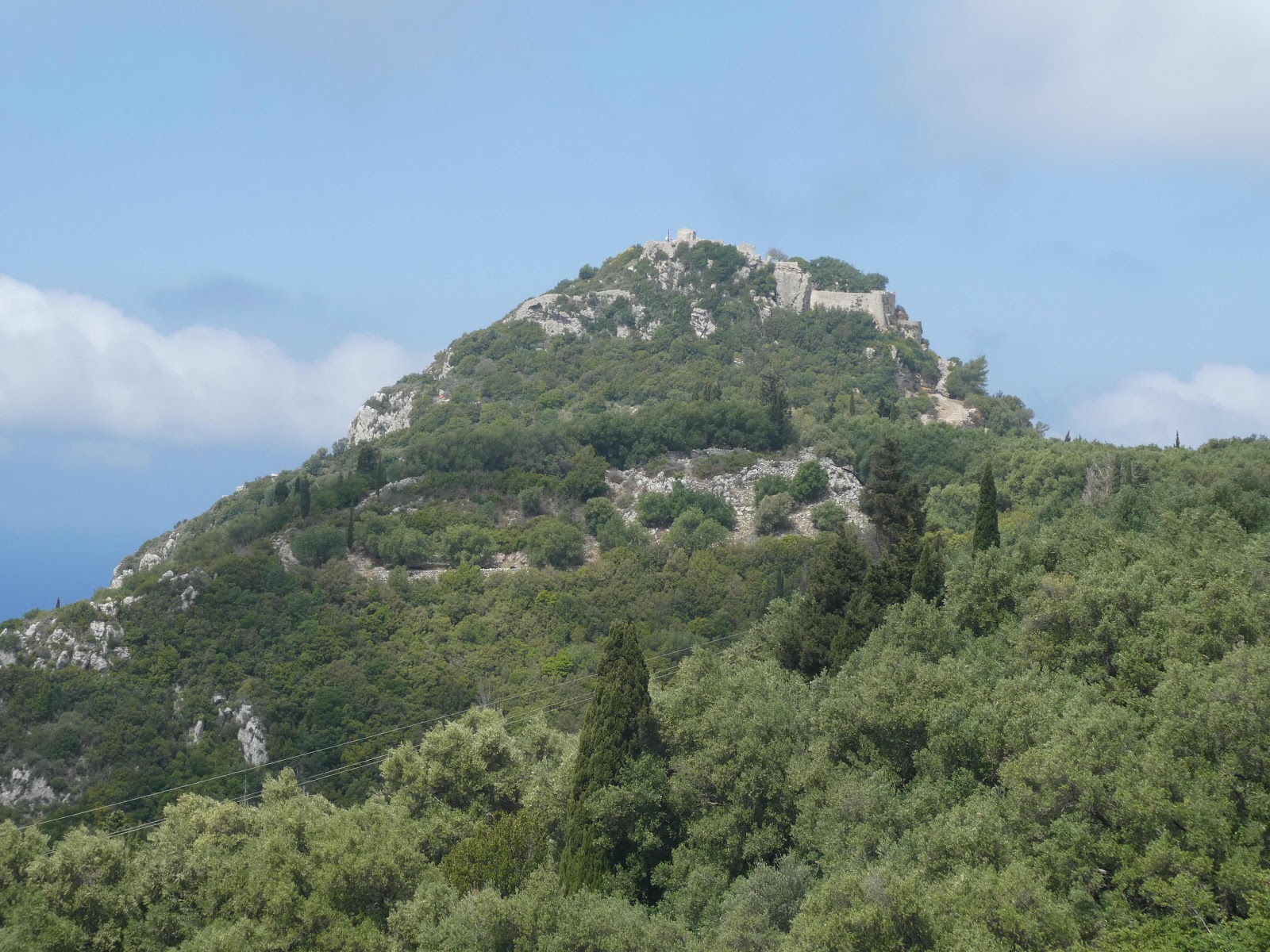 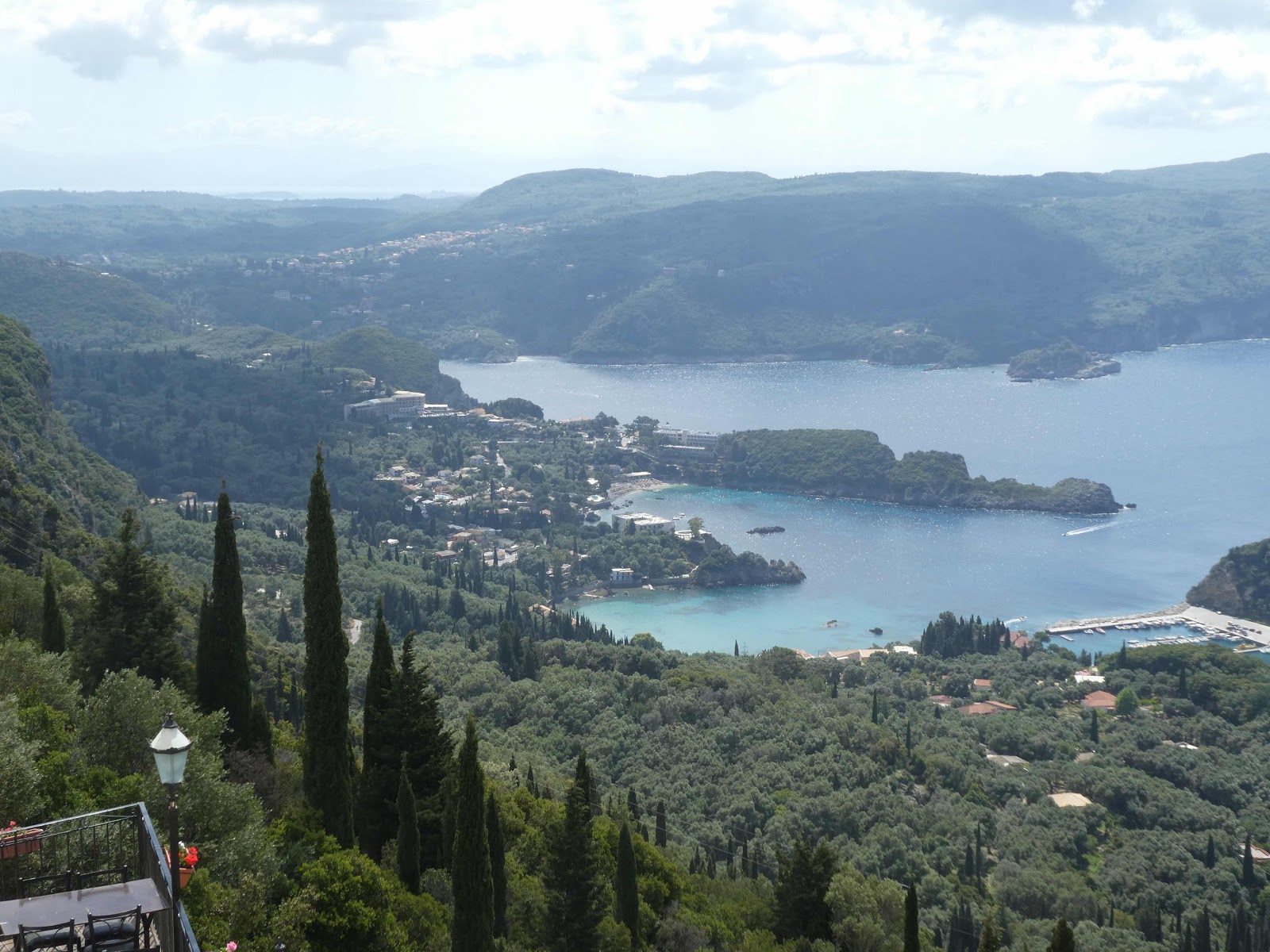 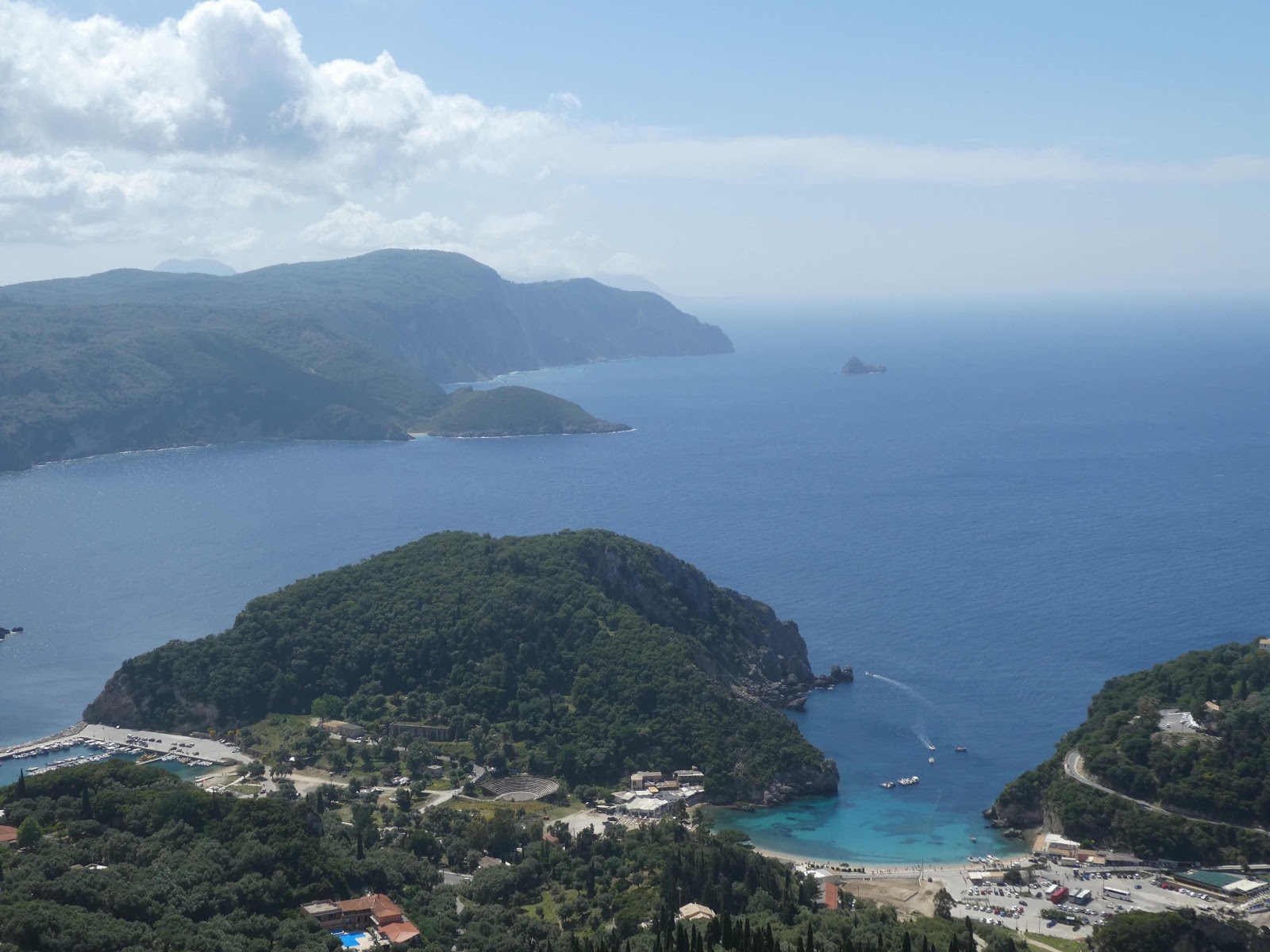 On our way down to Paleokastrisa we stopped at a gifty shop where we tried some Corfu olive oil on bread along with some Corfu wine (we didn’t buy any!) and candied kumquat which are grown locally.  The people who owned the shop were such lovely people. 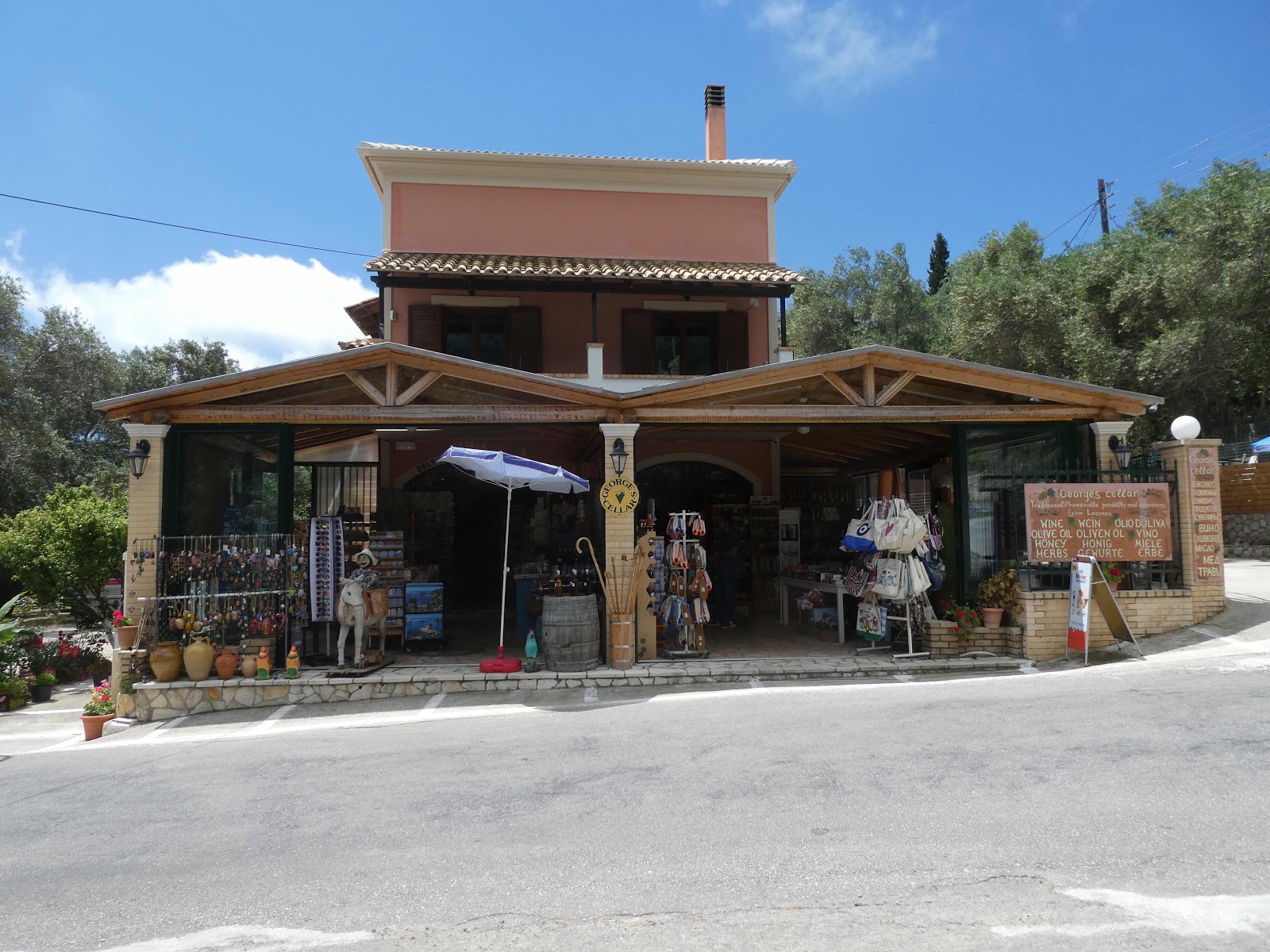 We drove through Paleokastrisa and up th hill to the Monastry.  It was just about to close for the monks afternoon rest but we managed to have a quick peek inside and take a couple of photos.  Penny disappeared and when I went to look for her I got a telling off from a very stern looking monk who was waiting to shut the door! 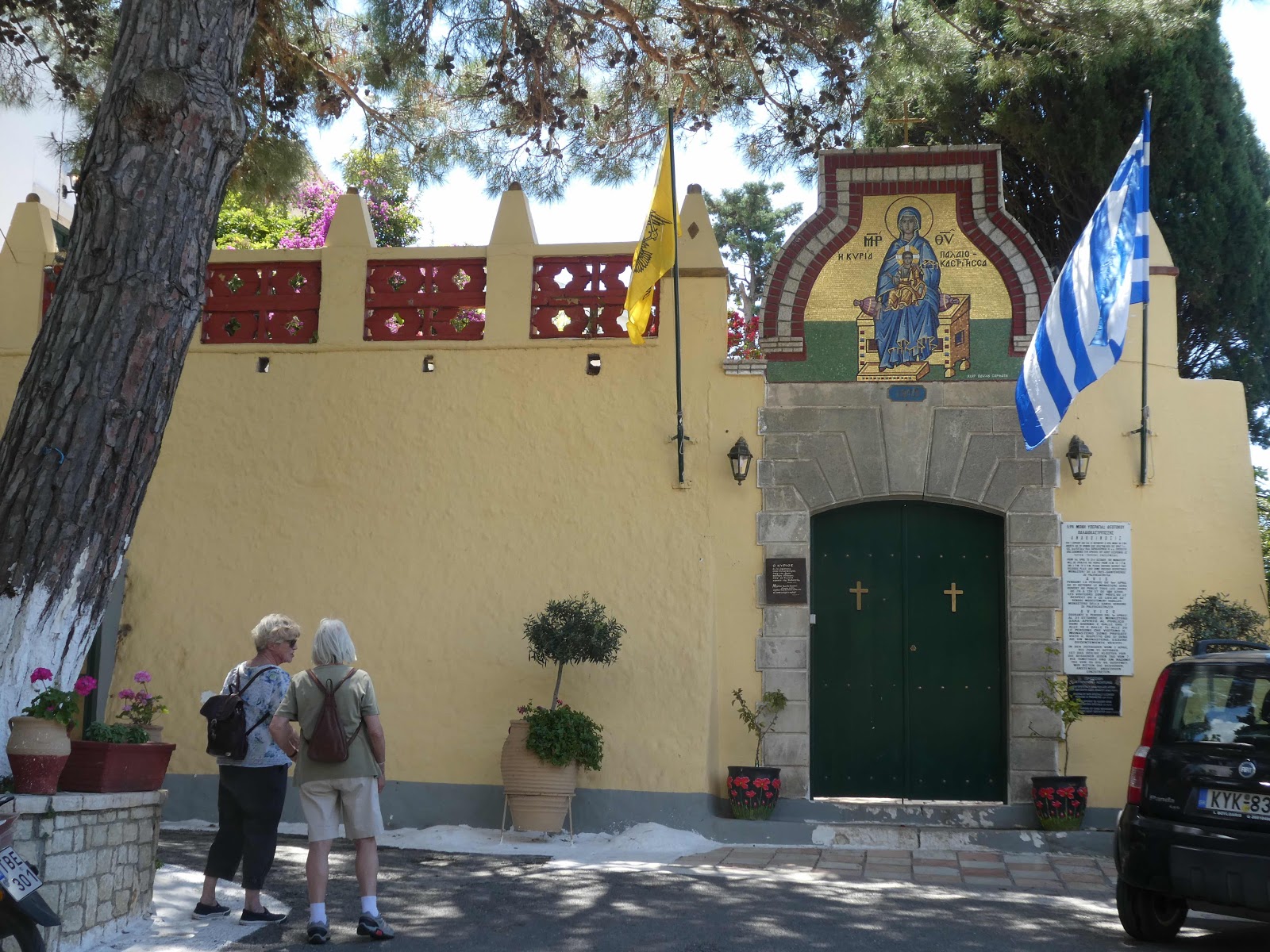 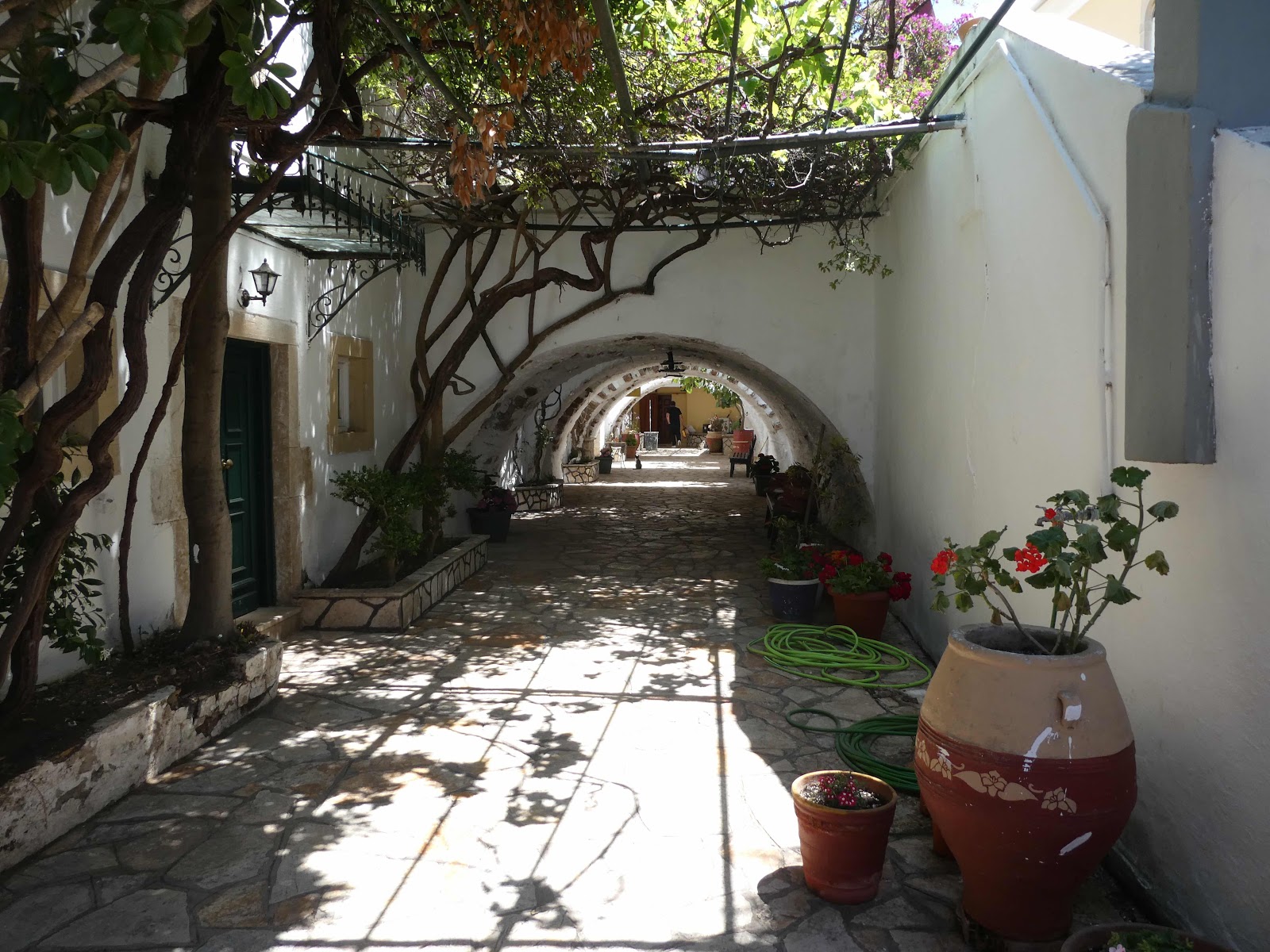 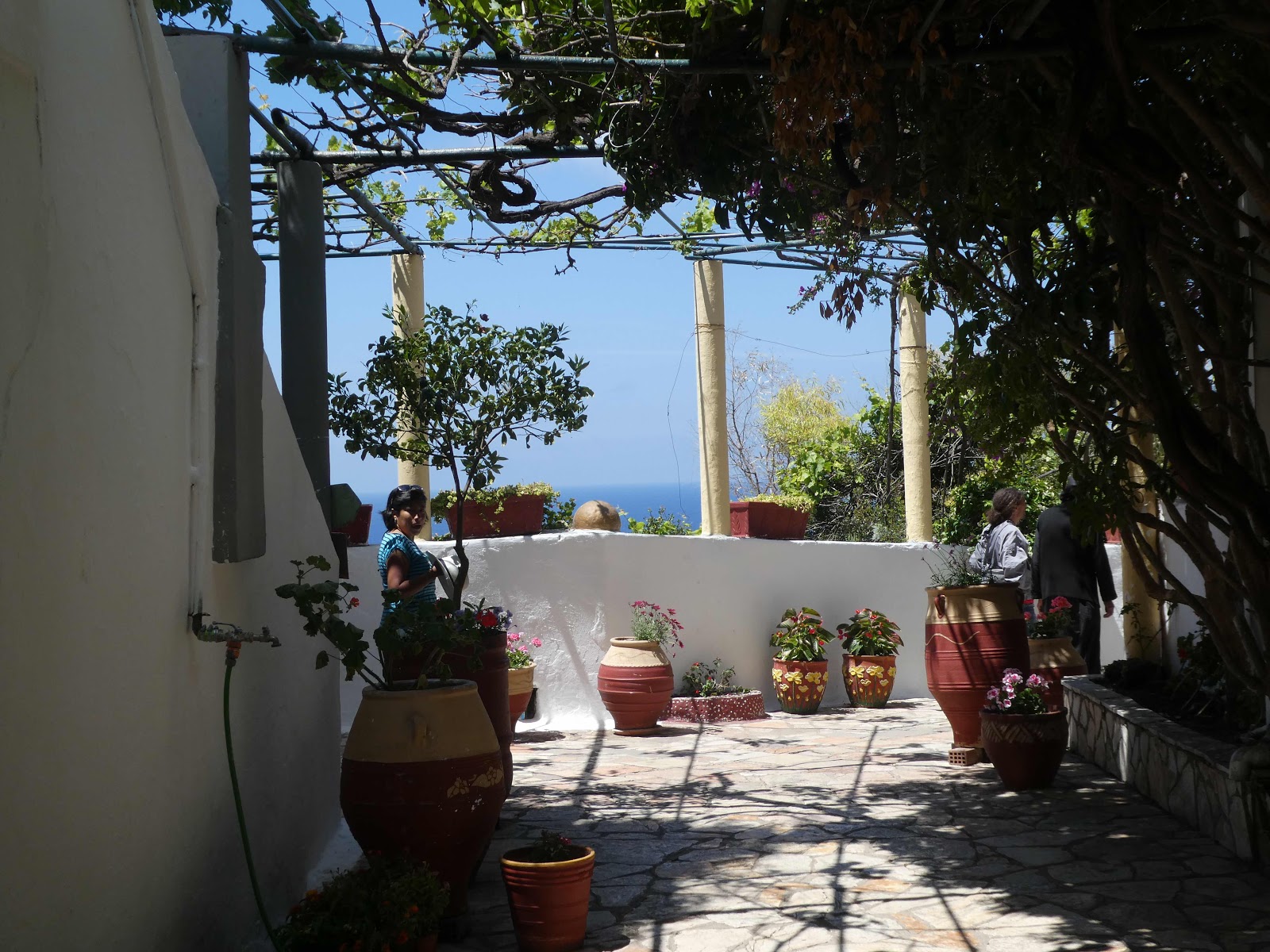 There are six monasteries on Corfu - if we had had more time it would have been nice to visit some more.
From there we drove to see what is called the “Kaiser’s Throne” - a raised platform named after Emperor Kaiser Willhem II who like to holiday in Corfu in the early 1900’s. 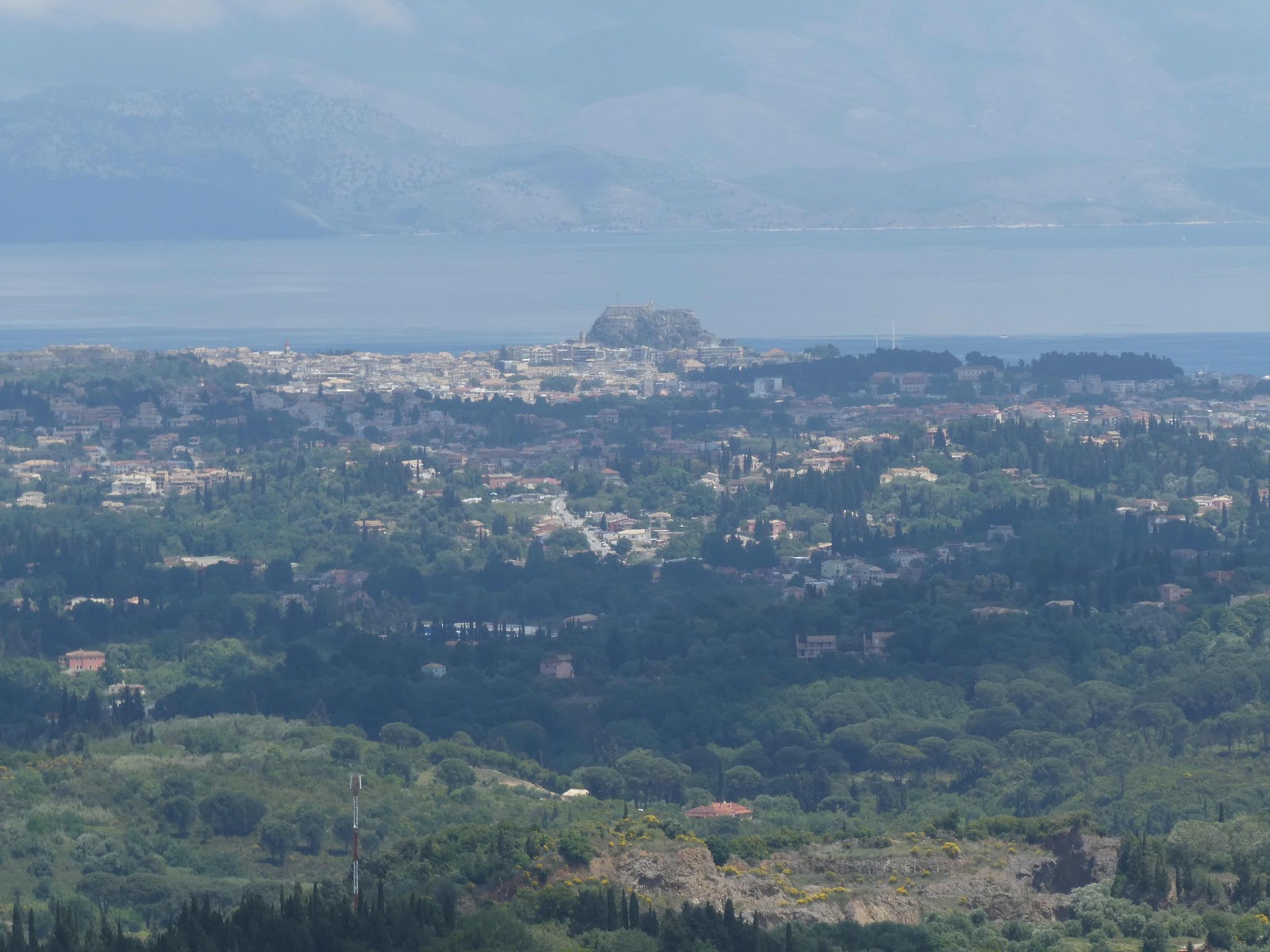 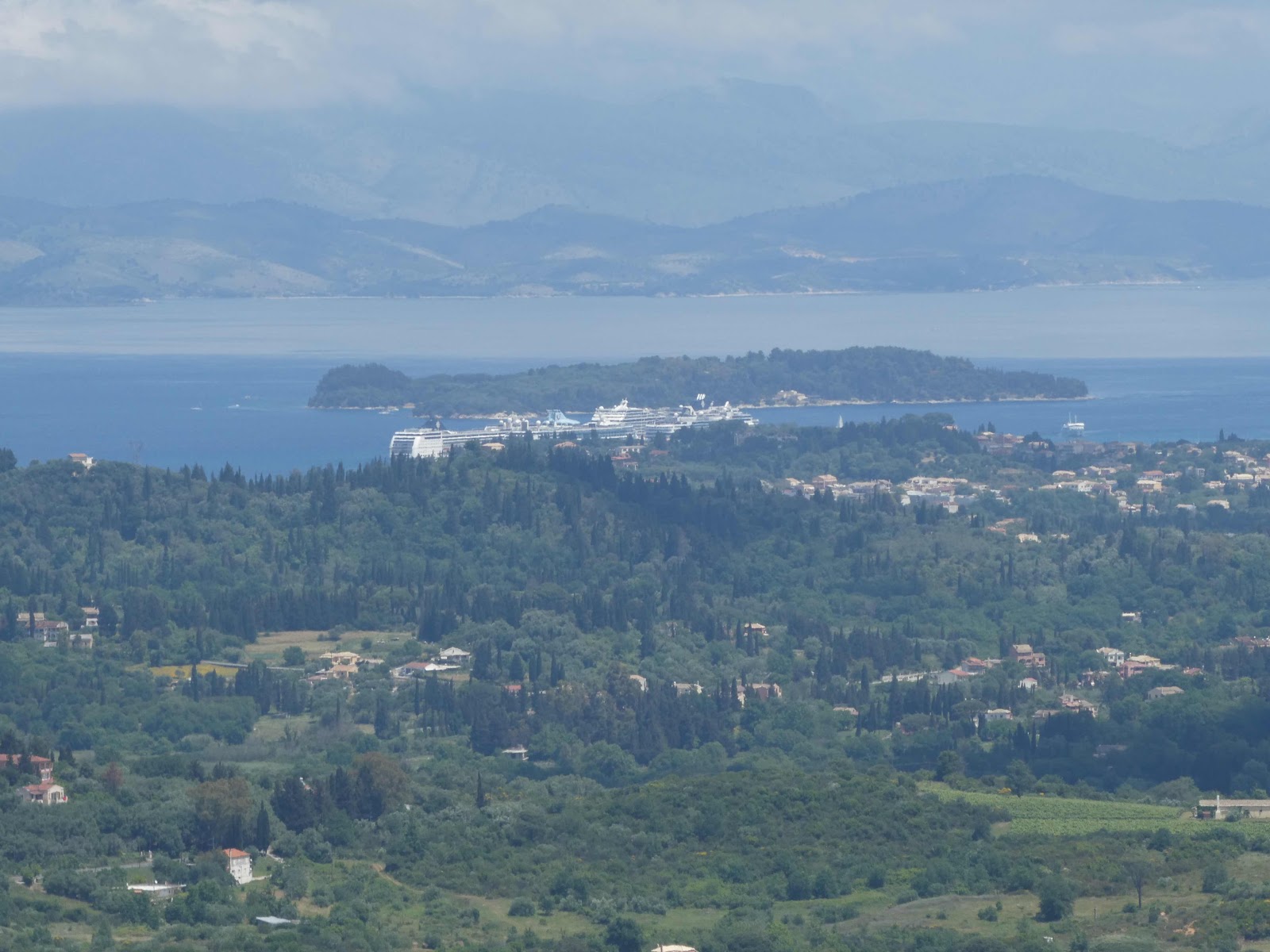 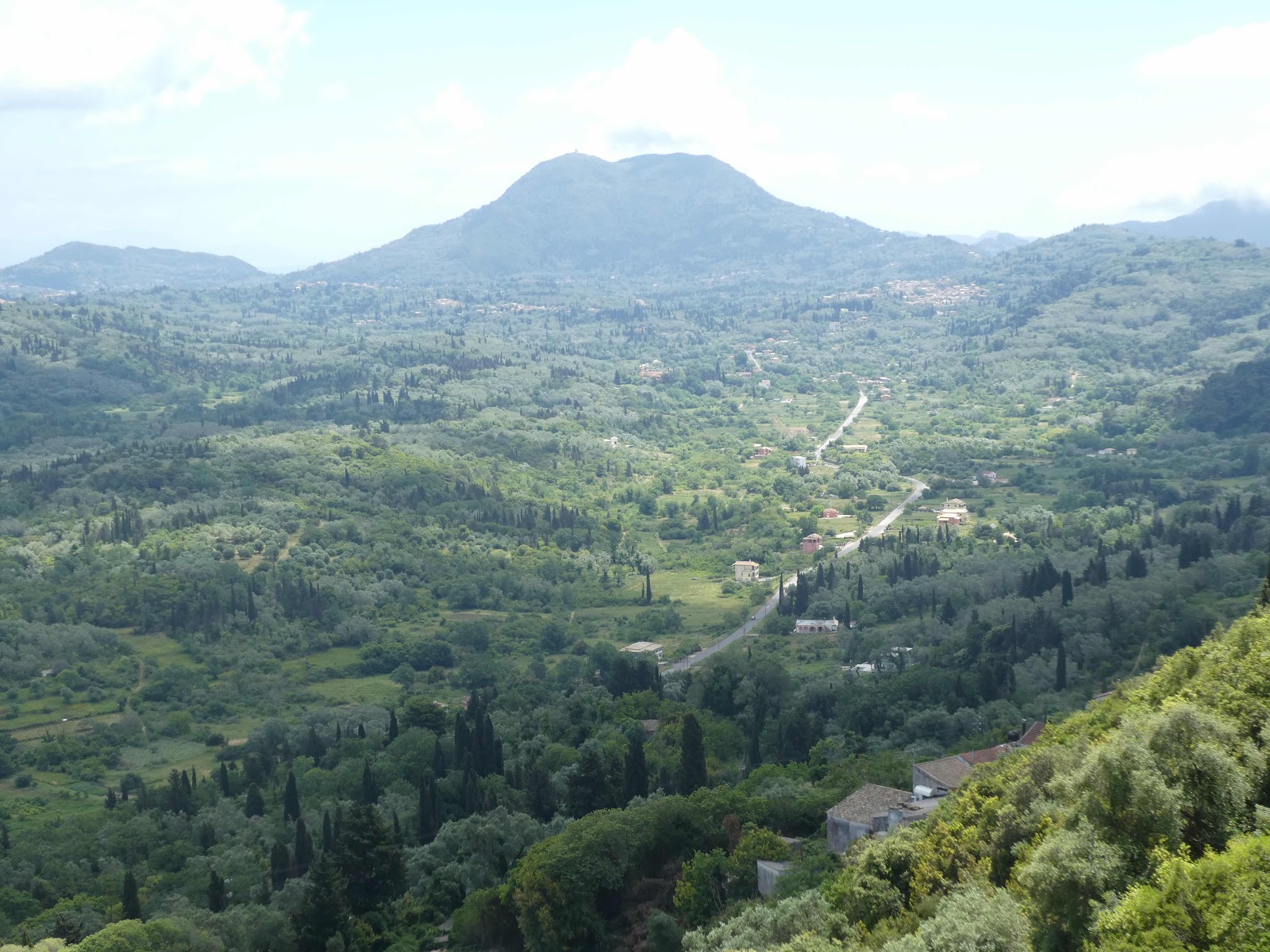 We drove back down towards Corfu town and to see the Panagia Vlacherna monastery and Mouse Island. 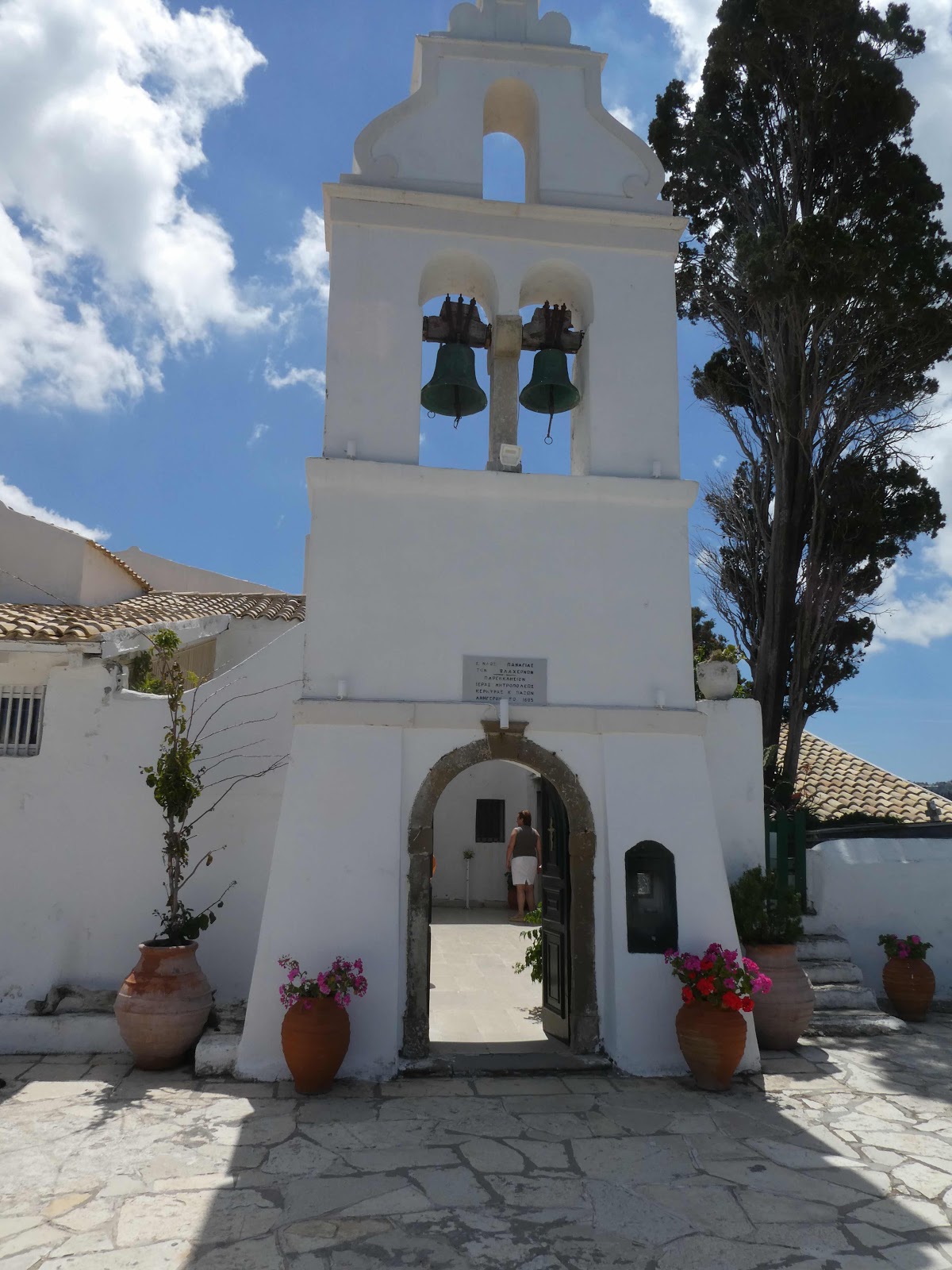 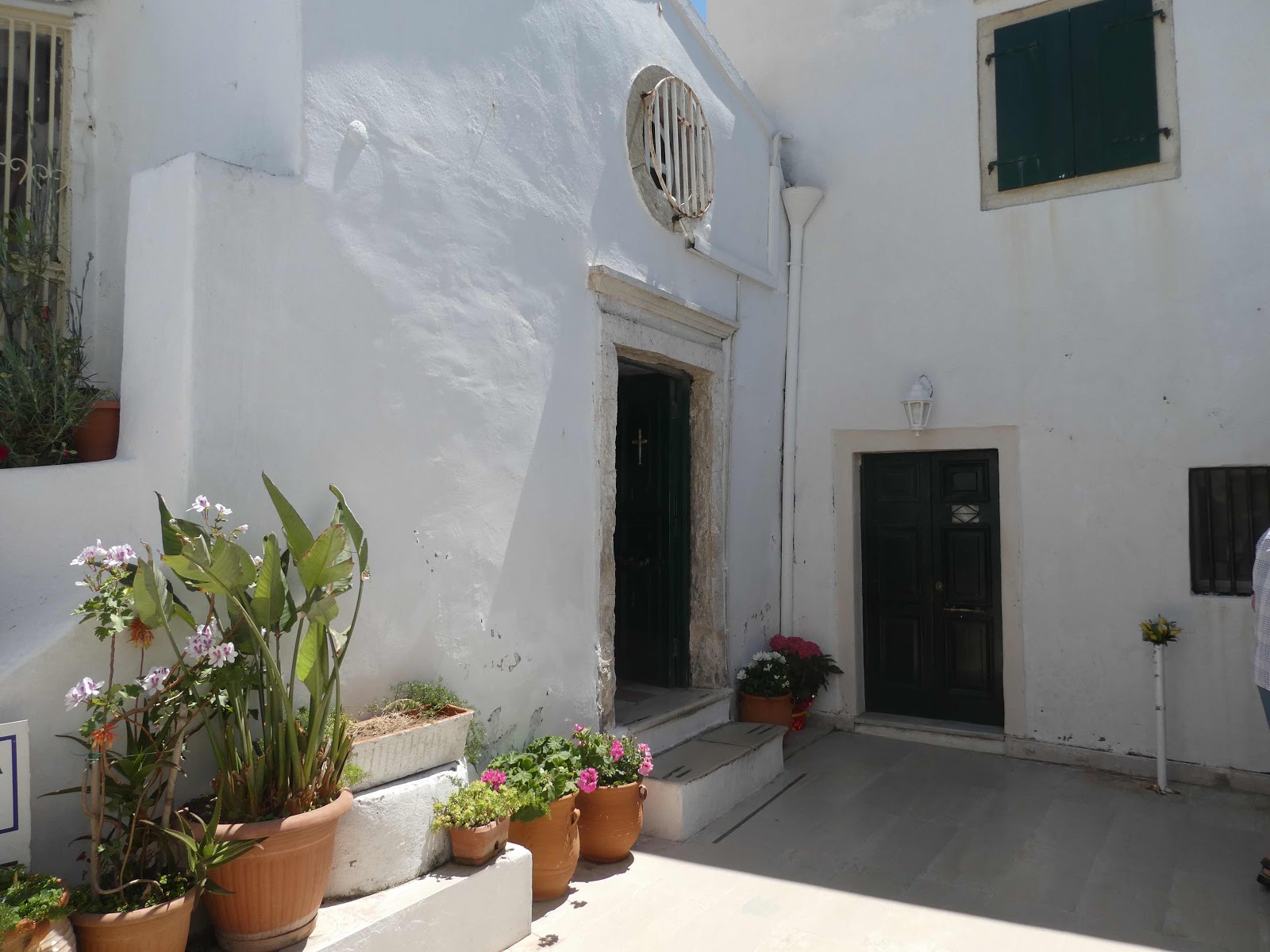 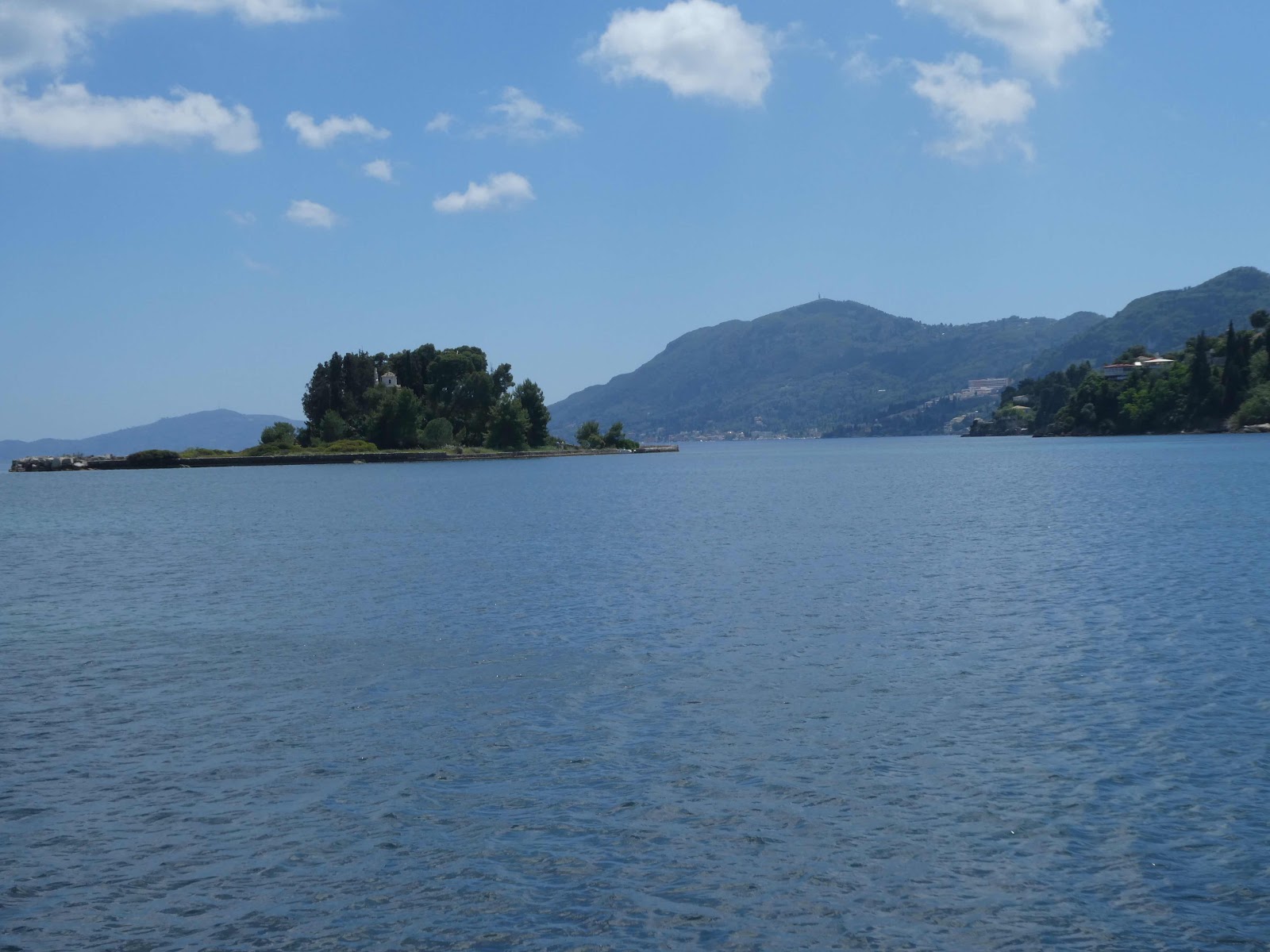 In the center of the Mouse Island, there is the 13th-century church of Pantokrator. 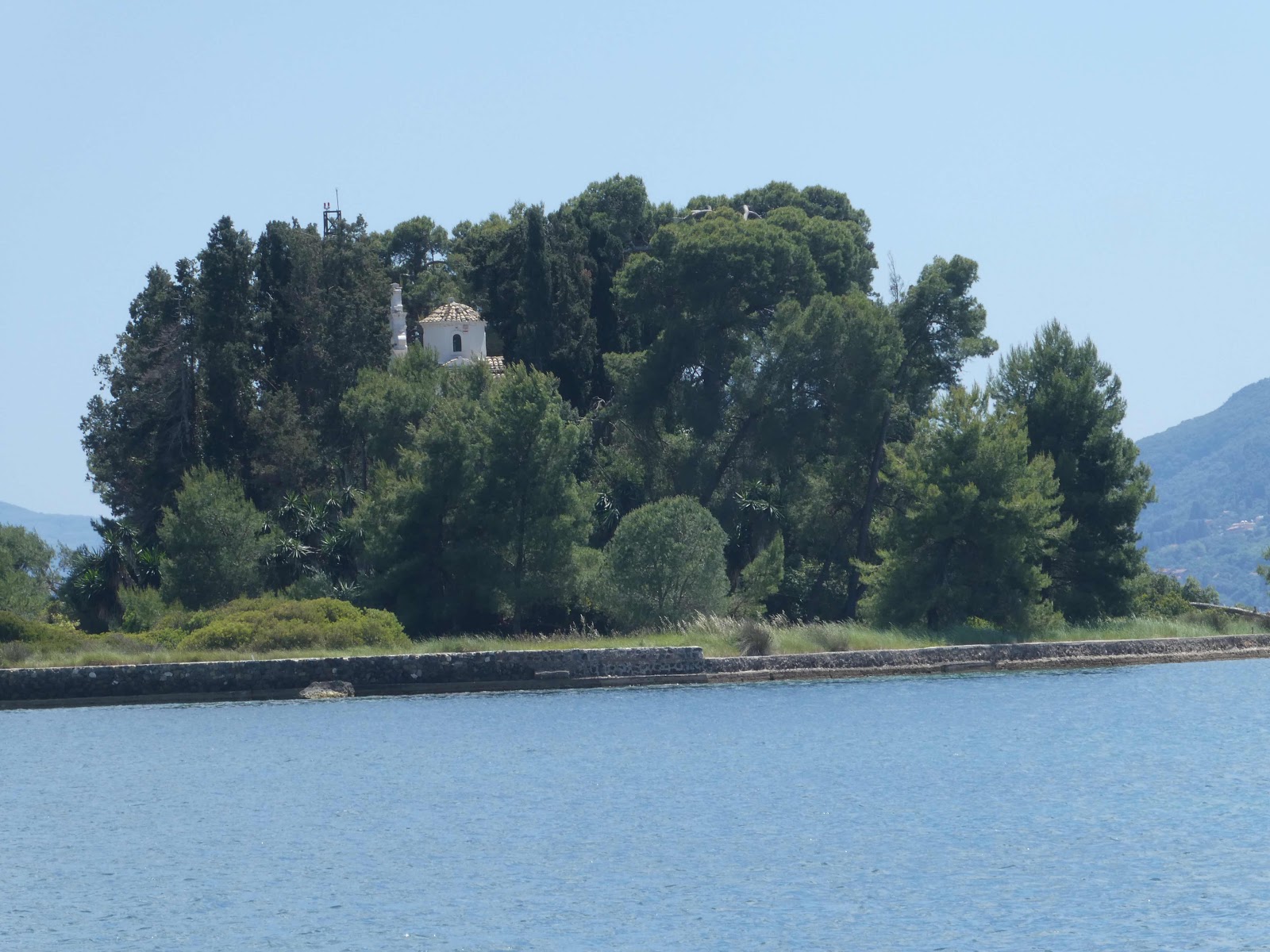 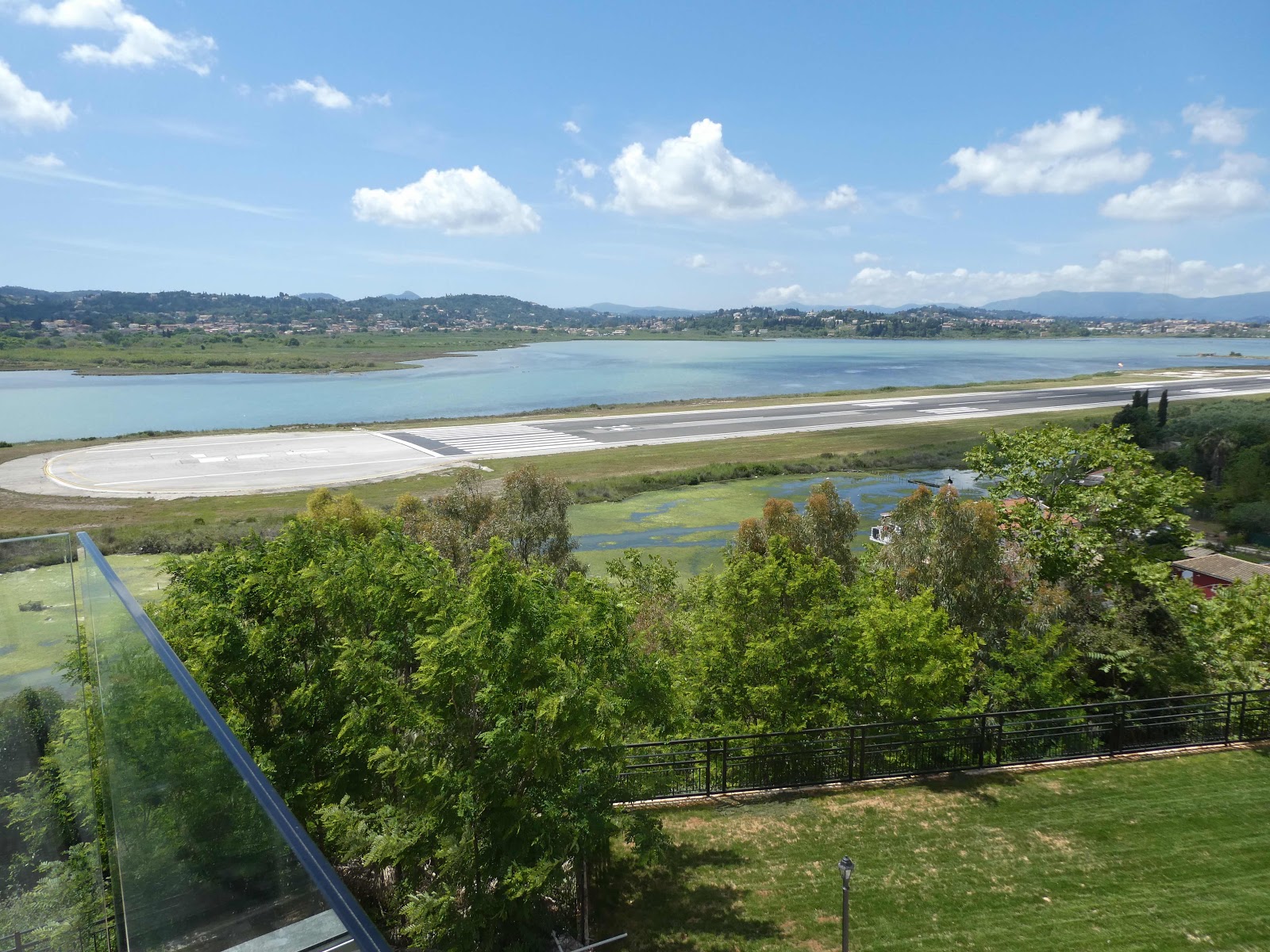 We stopped on our way back to the Old Town to take the following photo. 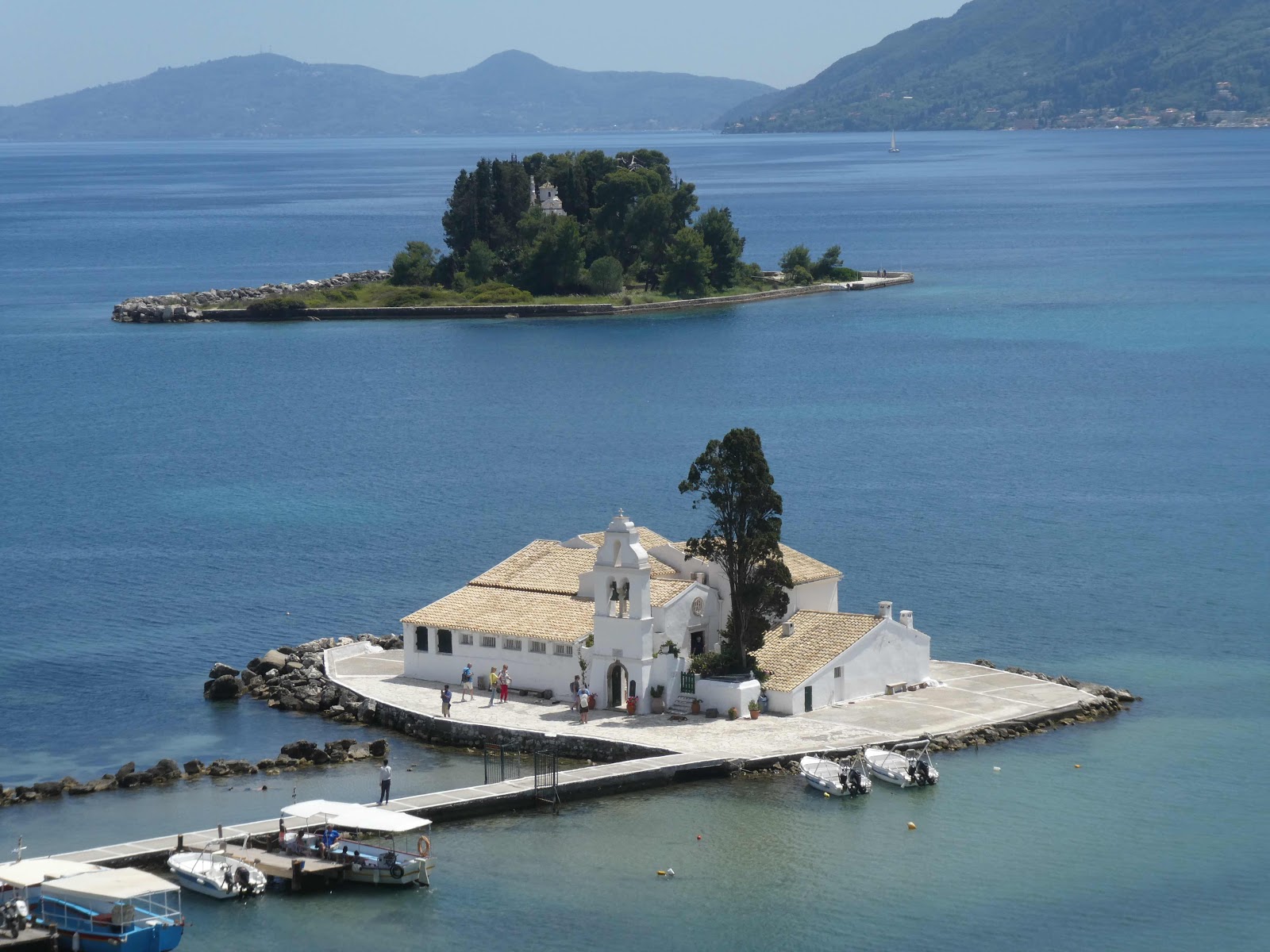 Sadly we were running out of time so only managed a drive through the Old Town, I guess we will have to come back one day to finish the tour!

There are two forts, the old one and the new one with the town nestled in the middle.  This is the Old Fort. 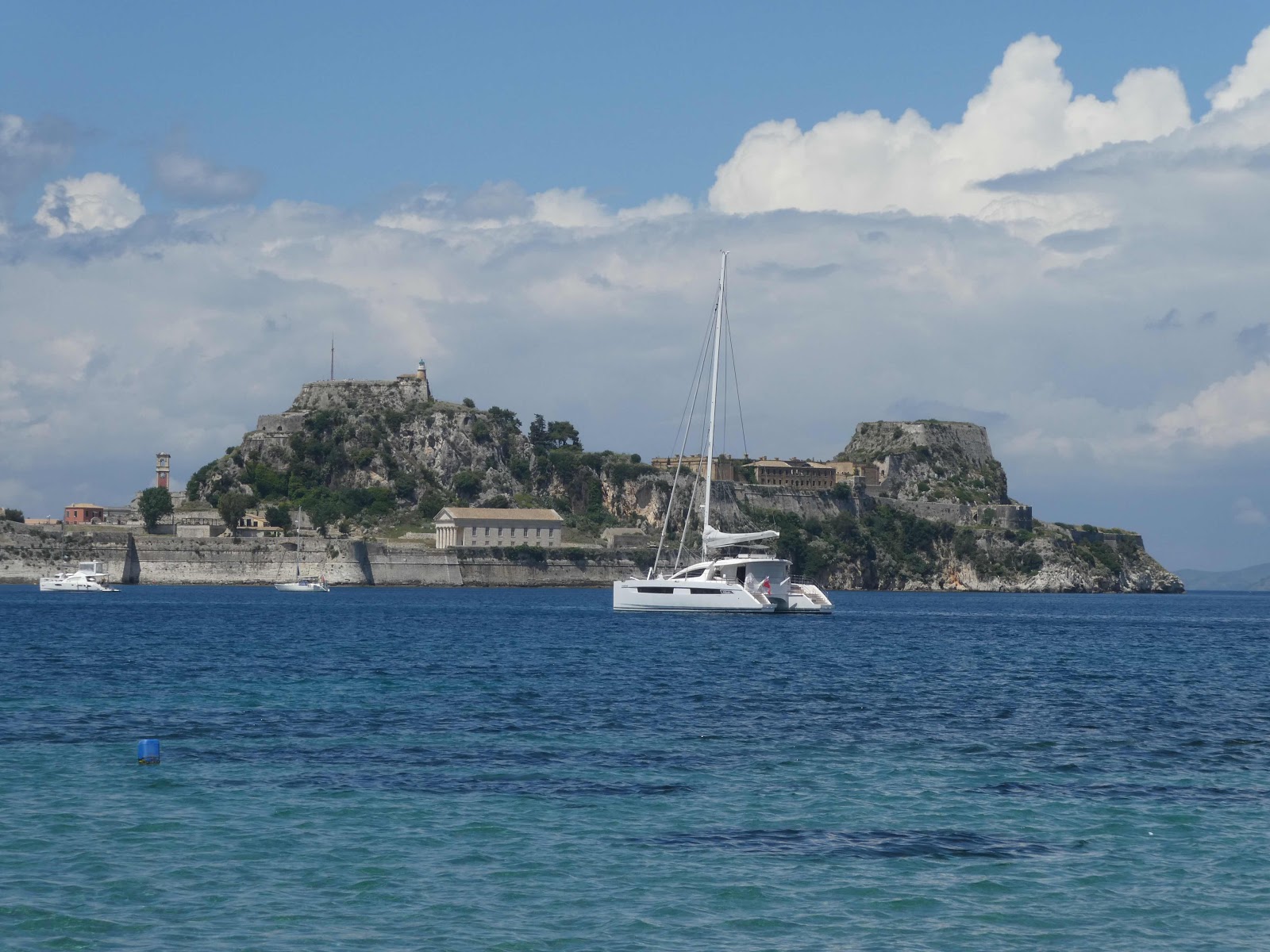 And this is the Palace of St. Michael and St. George which was commissioned by Sir Thomas Maitland, it originally served as the residence of the British Lord High Commissioner of the Ionian Islands. 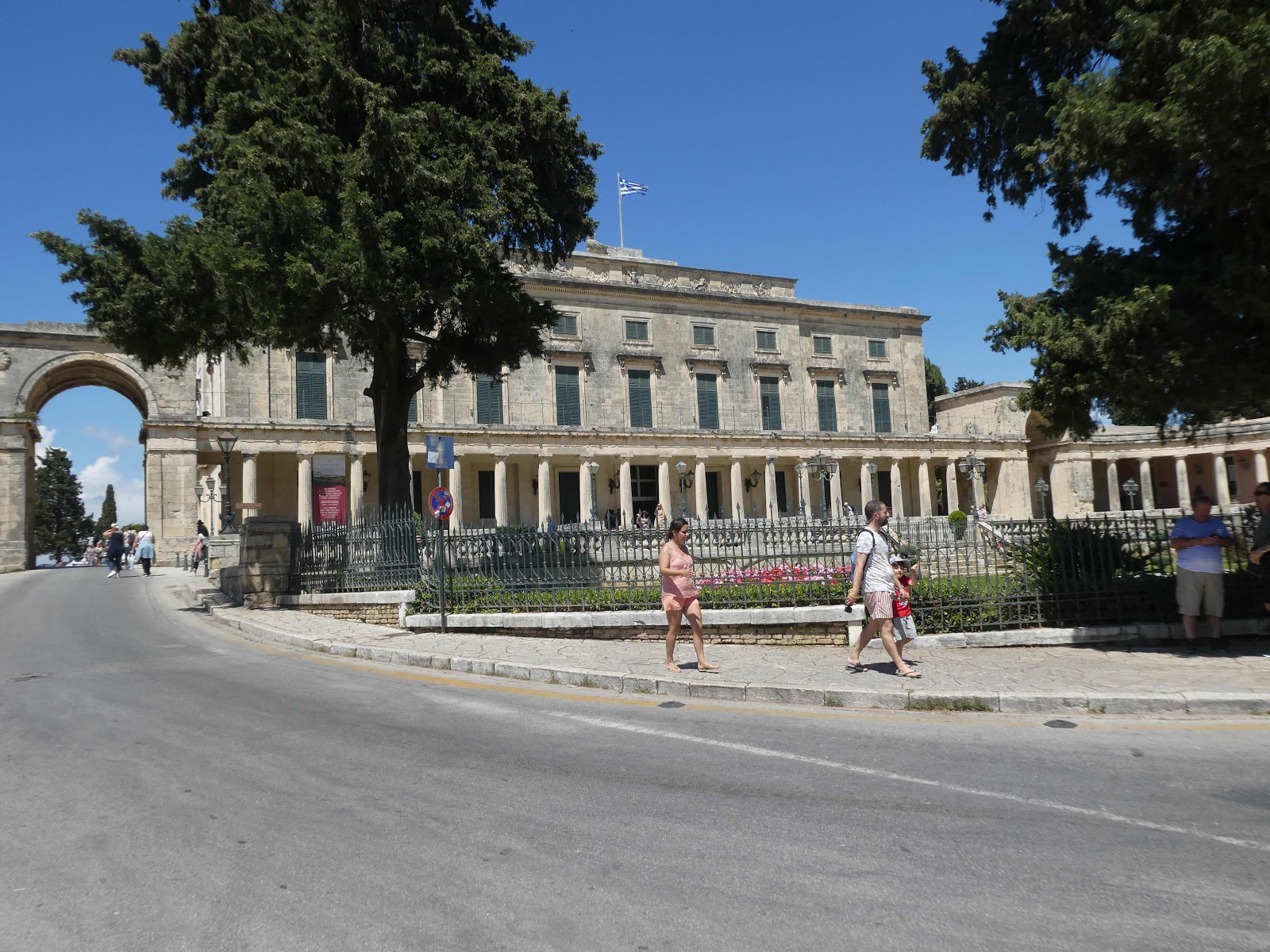 Prince Philippos of Greece and Denmark was born in Corfu in 1921 - who is he?  Our Prince Philip of course!!

The main downside of Corfu that we found was the rubbish everywhere.  Bins are overflowing and the fly tipping out in the country is appalling.  Spyros said that there is a new rubbish plant on the south of the island but that the locals are protesting outside so it can’t be used - crazy.  I hope they get the situation sorted by the time the main tourist season starts however, on the positive side, the bougainvillea and geraniums were lovely.

Another very quiet day, preparing for the five hectic ones still to come.
Posted by Linda Gifford-Hull at 06:51