We woke up to this view. 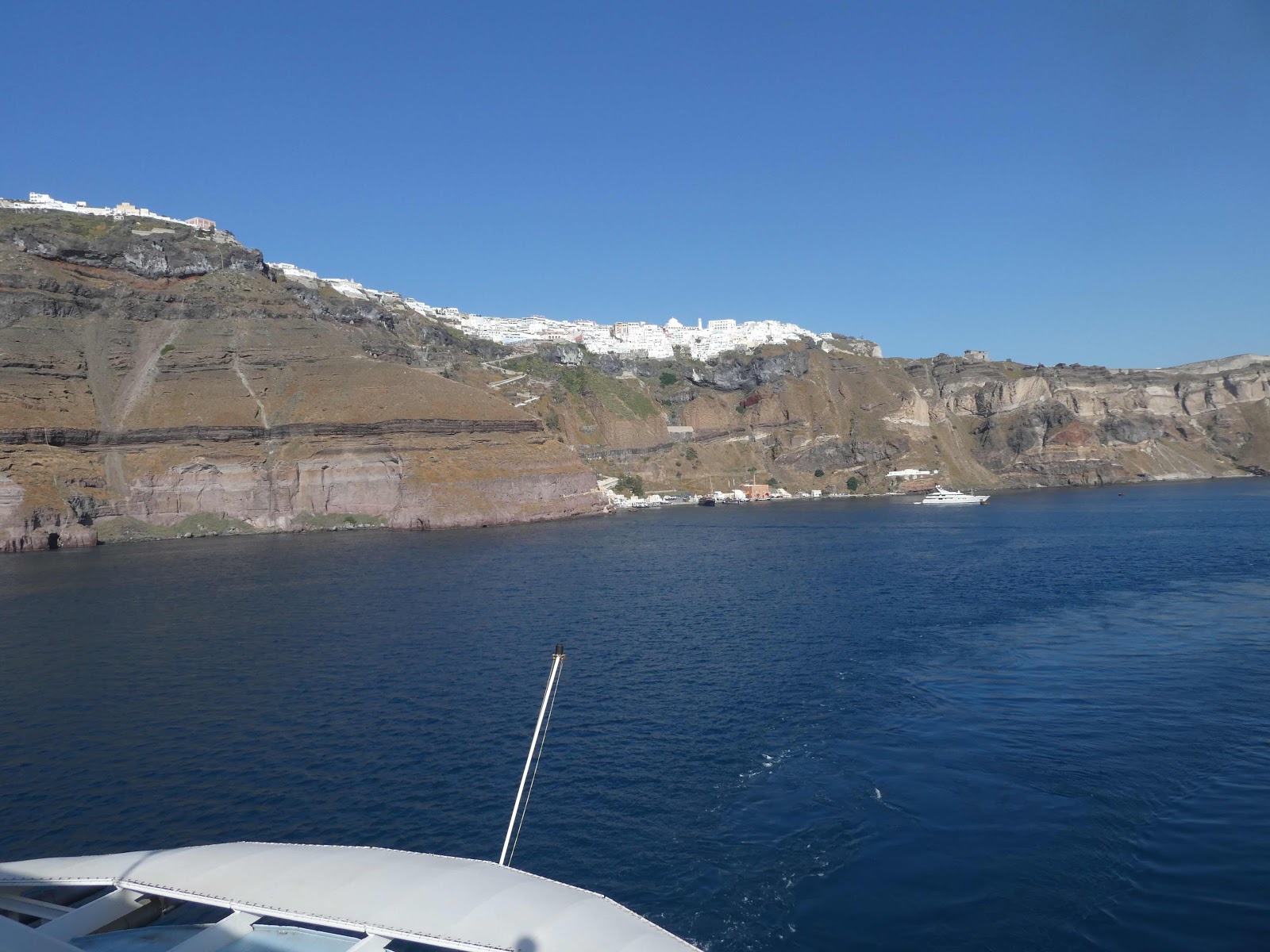 Santorini is an amazing island built on the top of lava and ash. 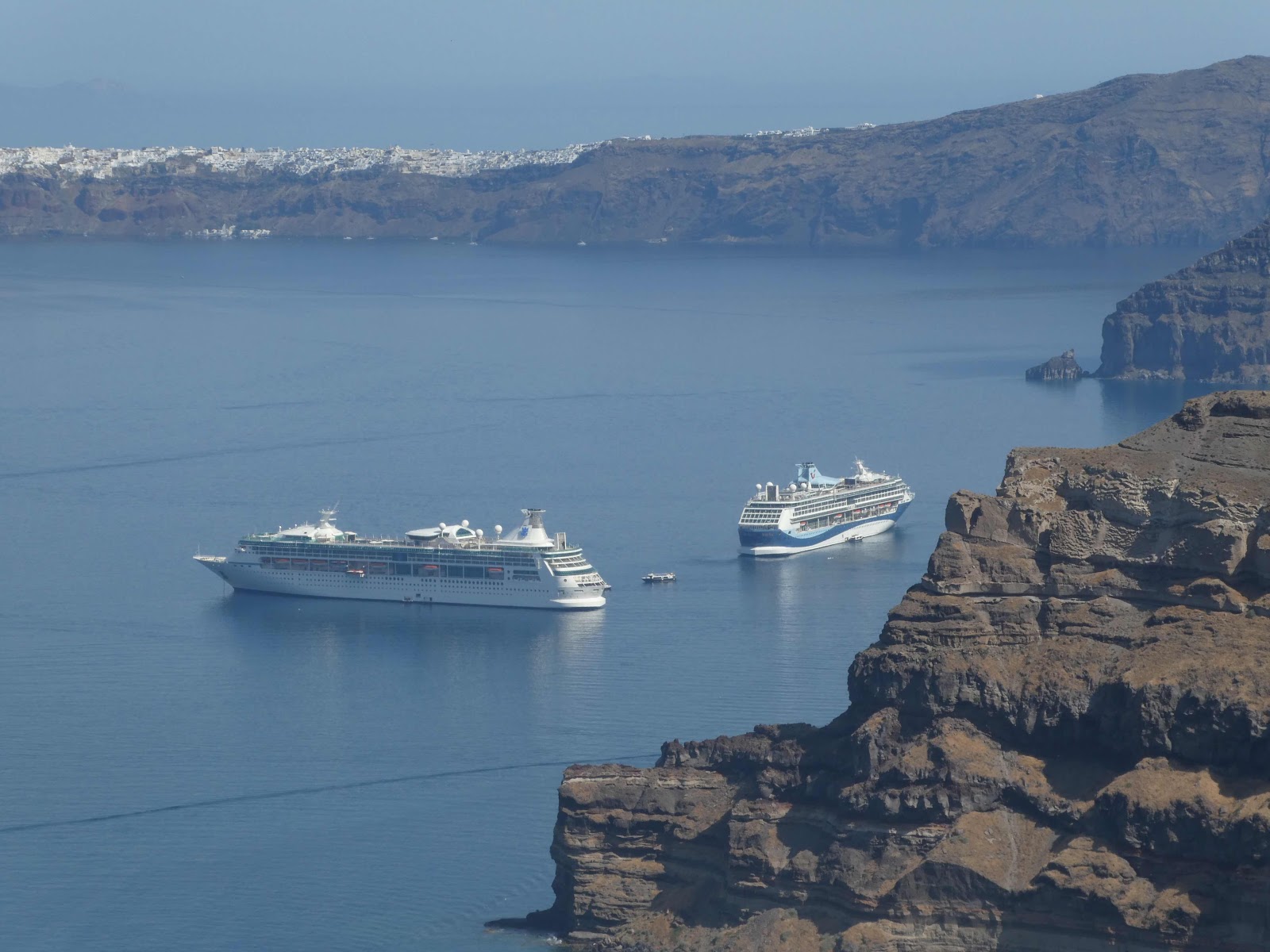 Santorini is only 35 square miles and has about 15,000 inhabitants.  The main religion is Greek Orthodox with a few Roman Catholics.  Santorini is made up of 5 islands with only 2 inhabited who live in 14 villages.

Our excursion was to a winery and Oia.  The winery was the first stop and I chose a red wine that was really a white wine!  To be perfectly brutal I found it awful ☹️.  I picked up a sesame breadstick to try and take the taste away and one of the sesame seeds went down the wrong way and I choked, and I mean choked!!  I have never choked like that before, I couldn’t get my breath - it was rather frightening.  Once I had finished coughing I was left with a rotten headache.  Needless to say we didn’t buy any of the wine!

We drove to Oia through rather barren land.  Tourism is the main source of income with agriculture being the second.  However, there is a shortage of water on Santorini so they only grow small vegetables and these take their water from the humidity on the ground.  Vines are also kept small but this is more to protect them from the strong northerly winds that blow across the island in August. 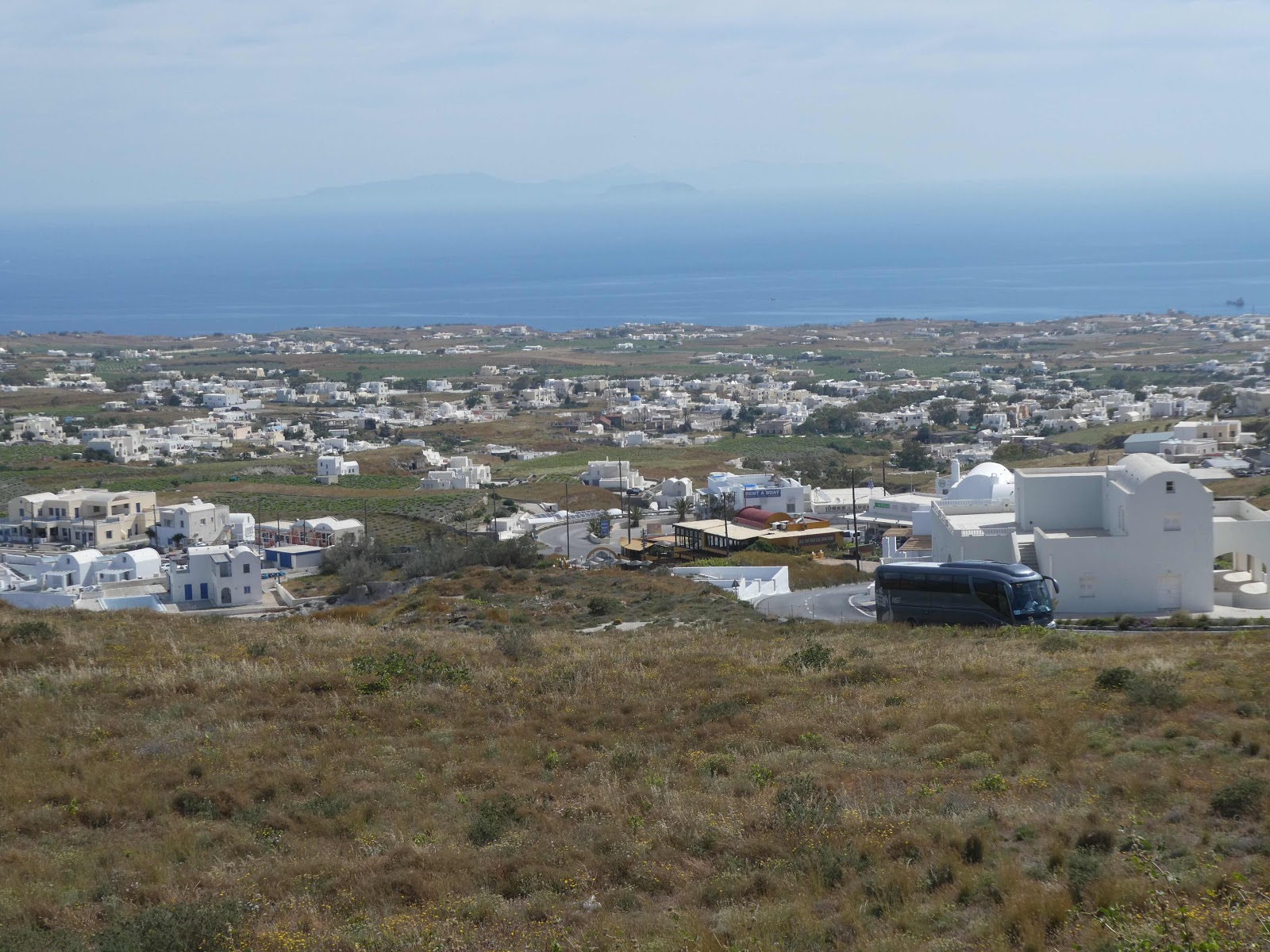 I am sure that Oia is really a lovely village but completely spoilt by tourists!  The coach parked up and we had to walk a short distance to the village but the traffic was chaotic - coaches, cars, scooters, quad bikes, all trying to pass each other and also parked cars  then add in a few hire cars, result - CHAOS!! 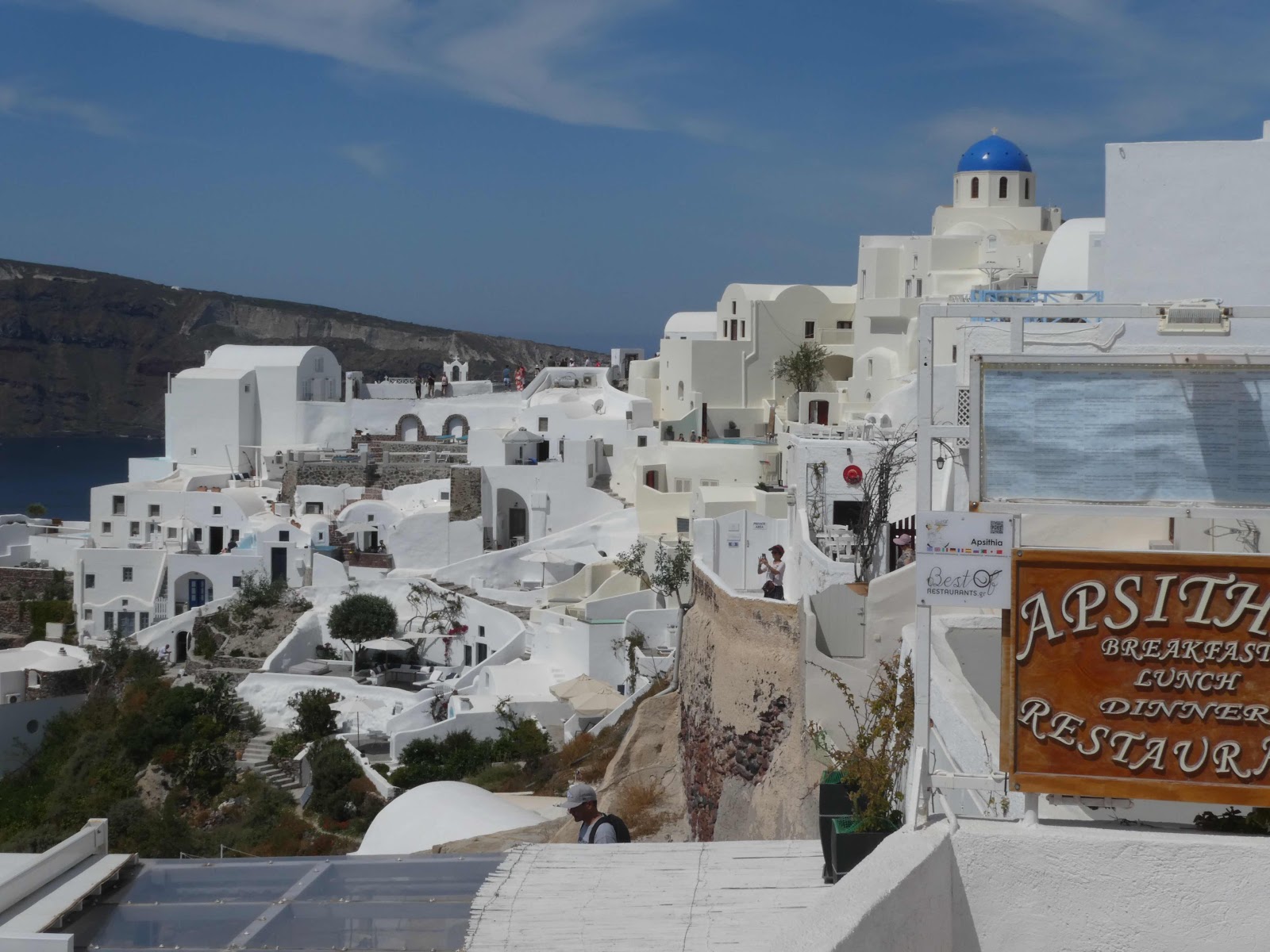 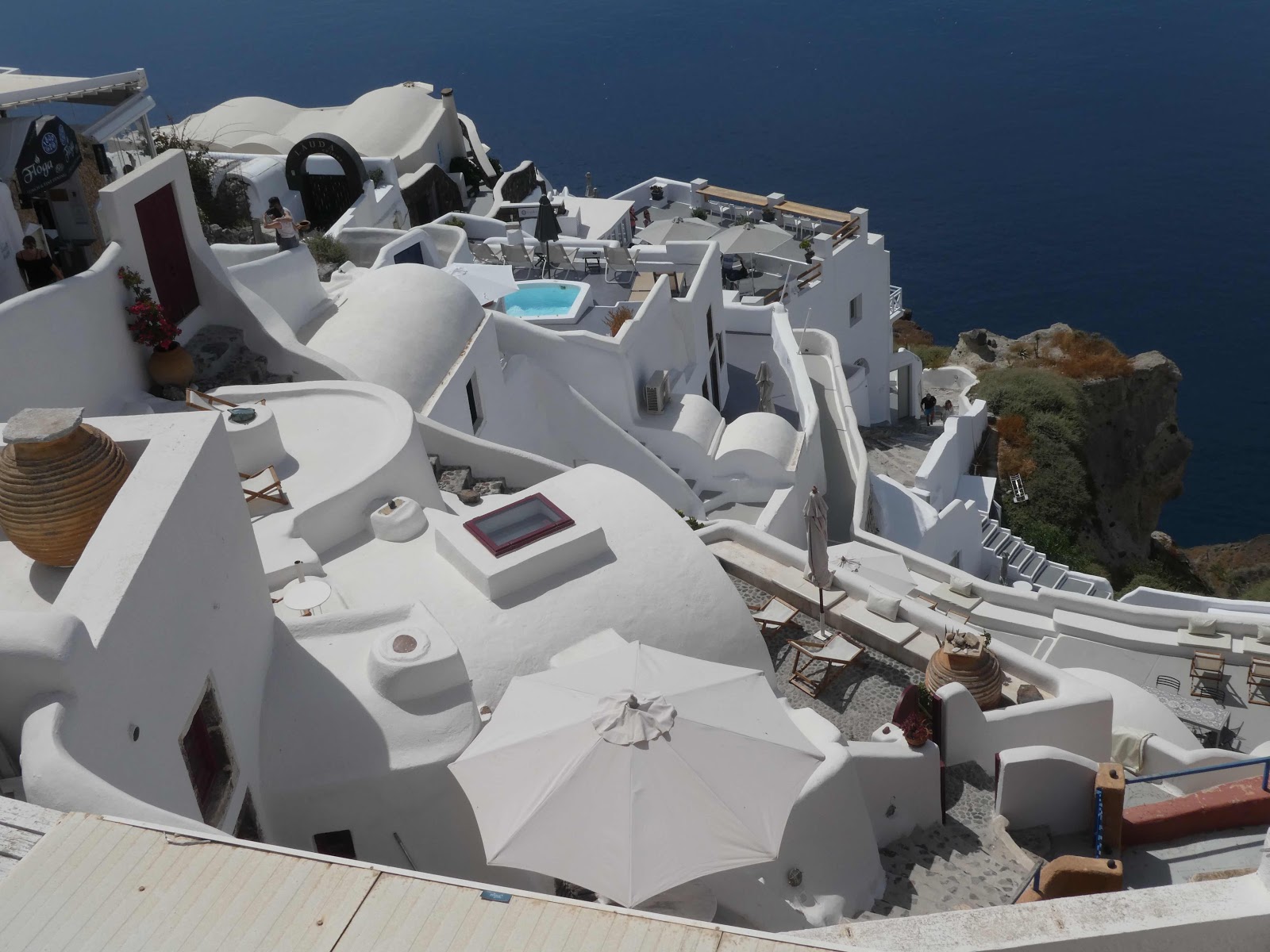 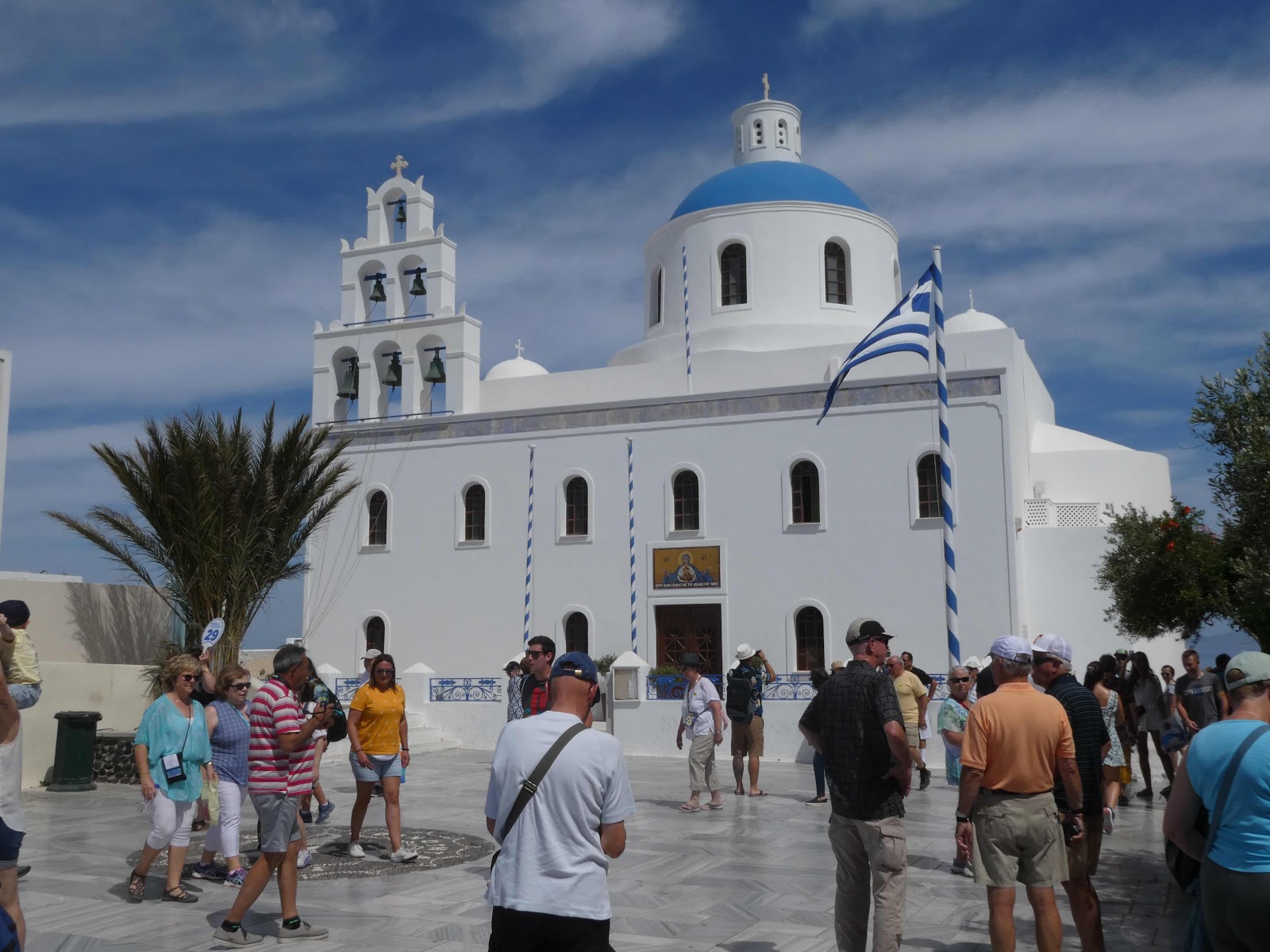 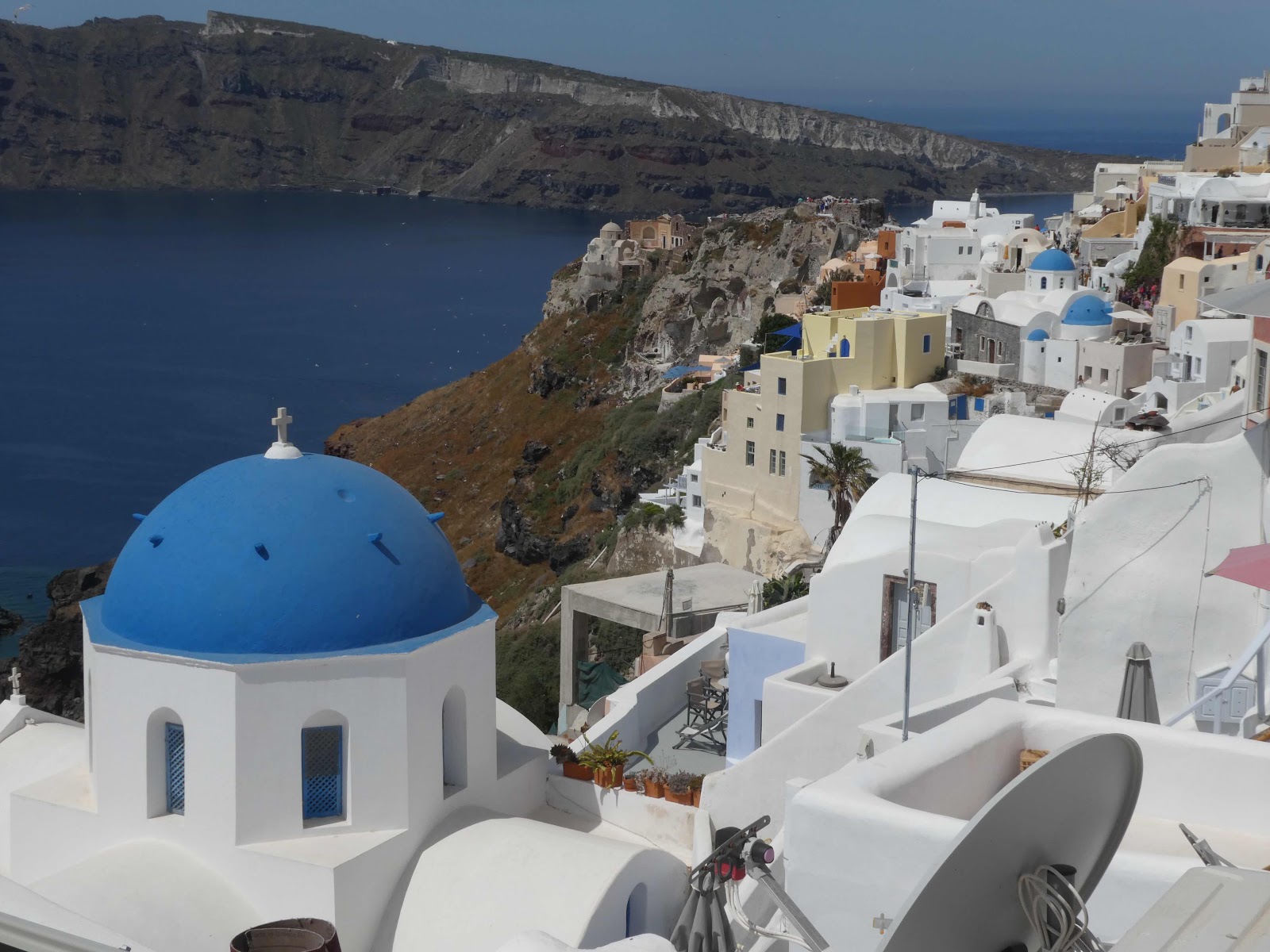 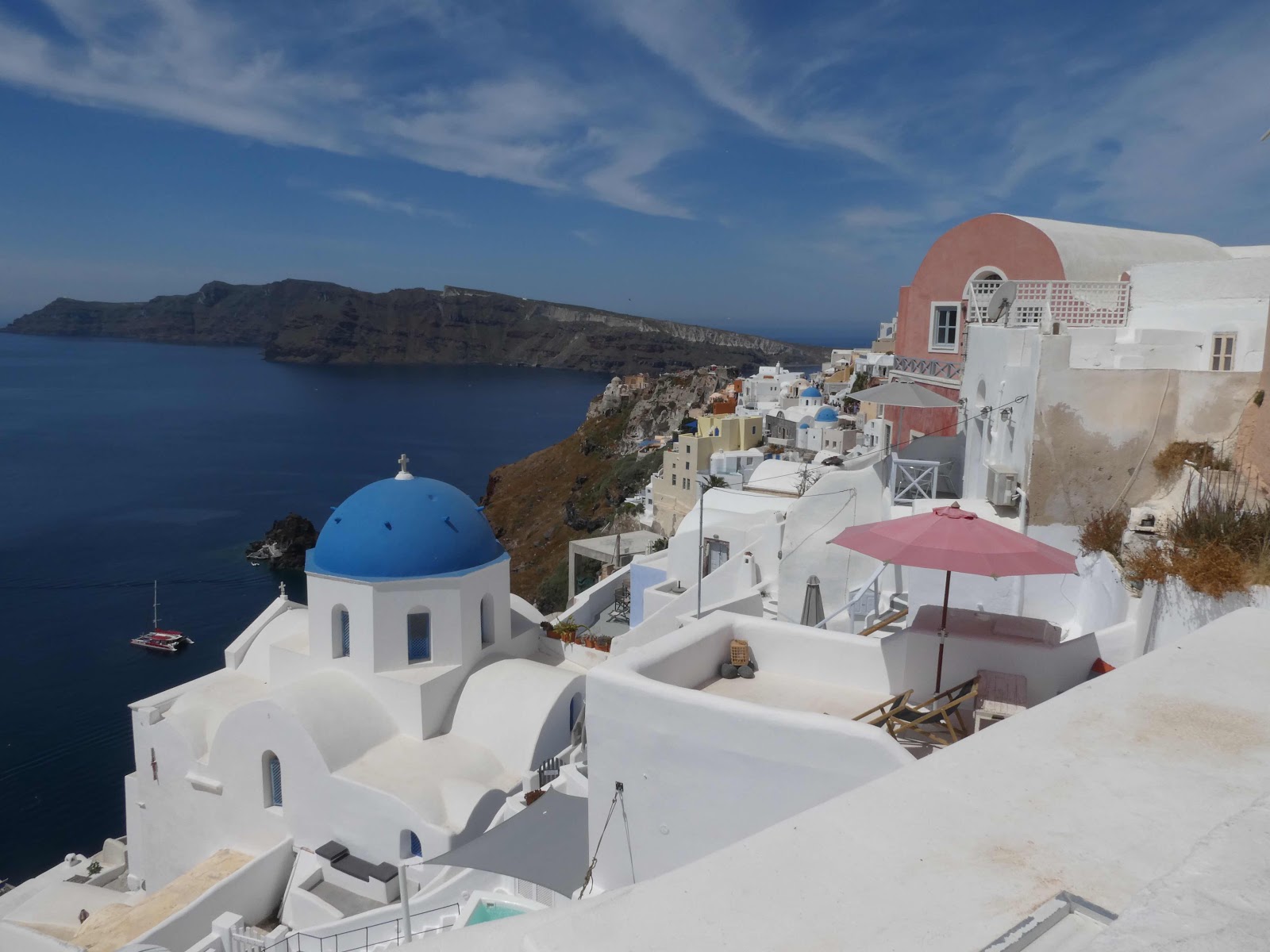 The pedestrian traffic in the narrow streets of Oia wasn’t much better!  We decided to stop for a coffee (and a crepe) before heading back to the coach.  Richard went on ahead and Penny stopped at a shop which left Jim and I.  We were walking past a parked van when a local bus tried to squeeze through the traffic.  We could see the gap left for us was getting narrower and narrower.  The parked van had a large rigid wing mirror and I could see us getting squashed!  Jim banged on the side of the bus to let the driver know we were there.  Suddenly the door opened and a young man (read lout!) jumped off and squared up to Jim shouting in Greek.  Two men came running over and pulled the lout off Jim - thank goodness they were there.  The driver got off and came over and apologised to Jim - so who on earth was the lout??

From Oia we drove to Thira, the main town on the Island.  We had quite a steep climb from where the coach dropped us to the main street and there were a few people who struggled.  We found a small bar with a shady courtyard and had a beer - no lunch as we were still stuffed from the crepes earlier! 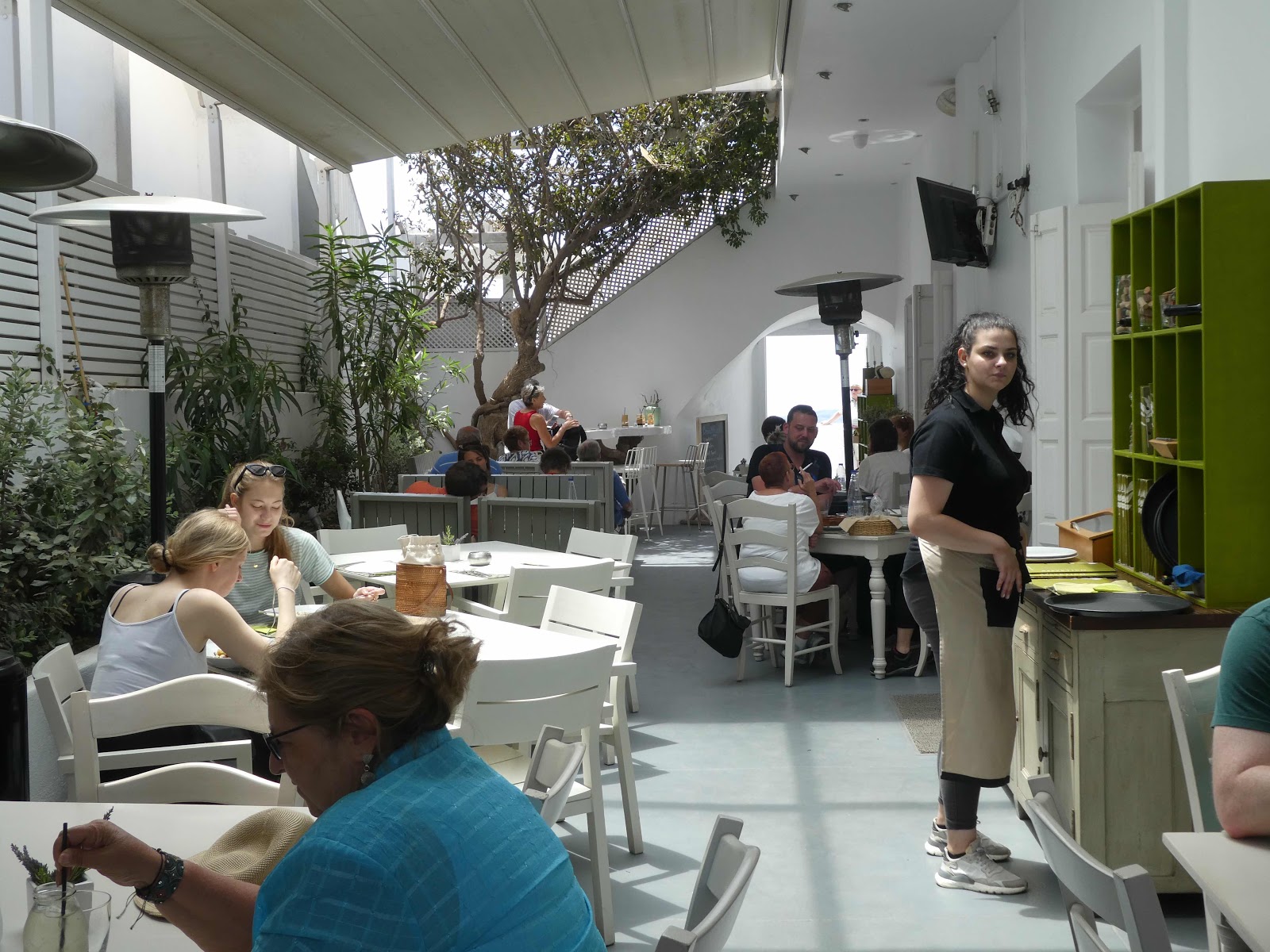 There is one main chapel in Thira but also lots of small ones.  These are privately owned and are usually only opened on their name day. 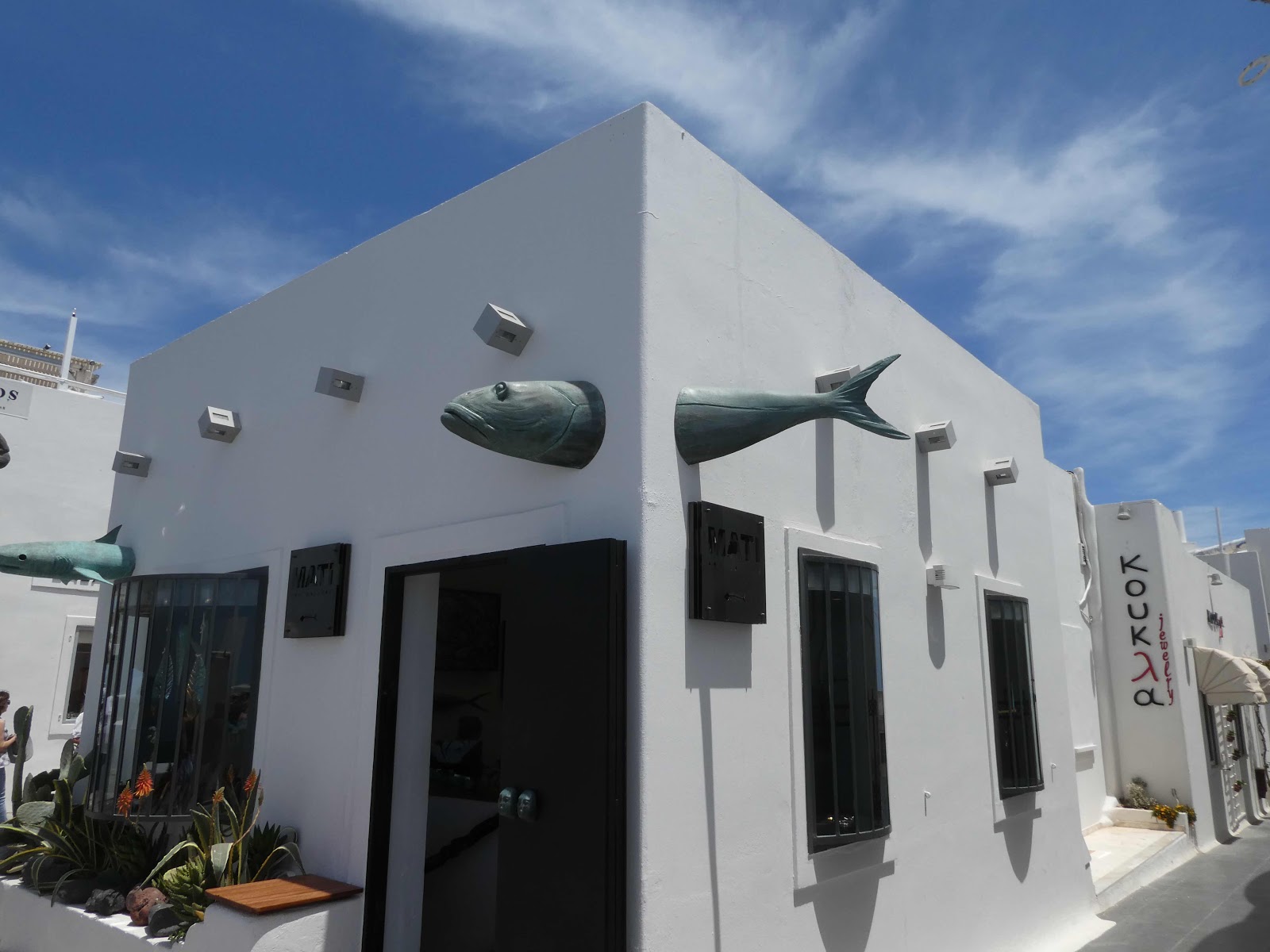 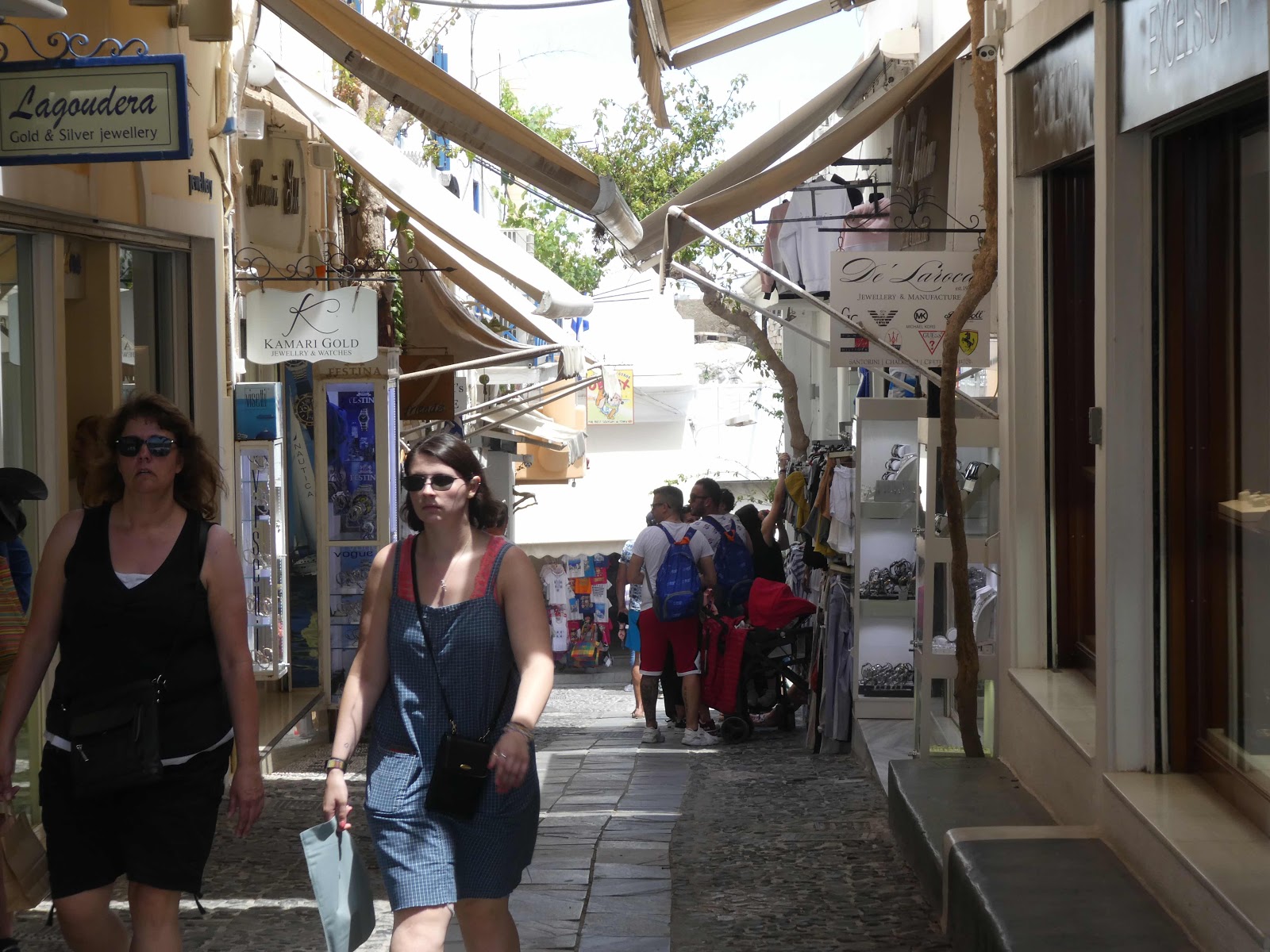 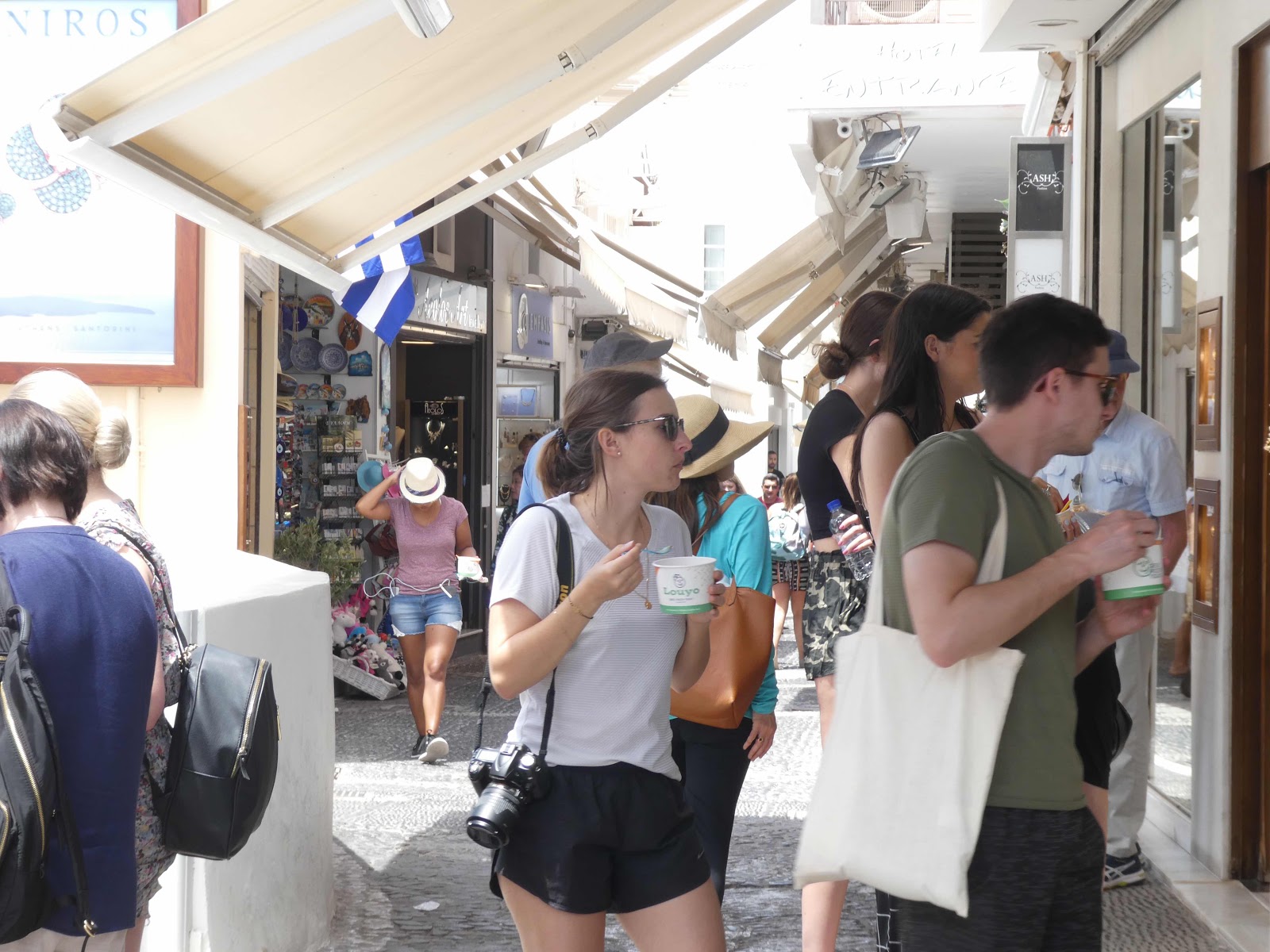 We walked along the street until we came across a queue of people - this was the queue for the cable car back down to the harbour!  We queued in the very hot sun for an hour.  It was horrendous but other than walking down there wasn’t any choice.  Well there were the poor donkeys who carry people up and down the steep, zig zagged path.  I can’t believe that it’s still allowed to continue in this day and age. 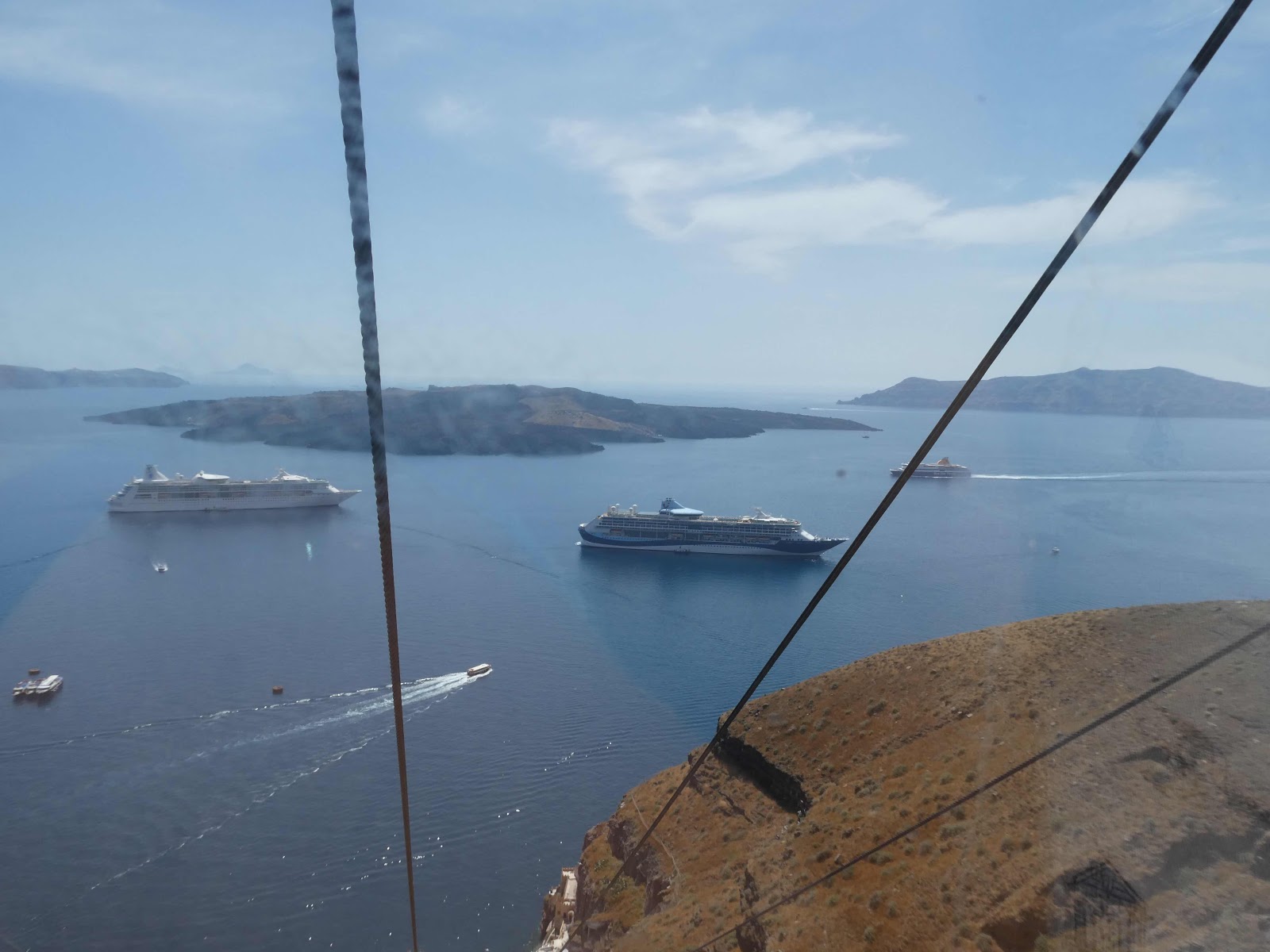 The cable car trip was over quite quickly and we were back down on the water’s edge waiting for a tender to take us back to the ship.

Santorini has a large active volcano on a neighbouring island.  During the past 500,000 years, the volcano has erupted and been reborn from its ashes 12 times, bringing dramatic changes to the physical structure of the islands around it. The devastating eruption that occurred around 1610 BC broke up the formerly single island of Strongyli into three separate isles – Thera, Therasia and Aspronisi – and created the caldera, an enormous rectangular lagoon measuring approximately 12 x 7 km with a depth of up to 392m, surrounded on three sides by steep cliffs 300m high. 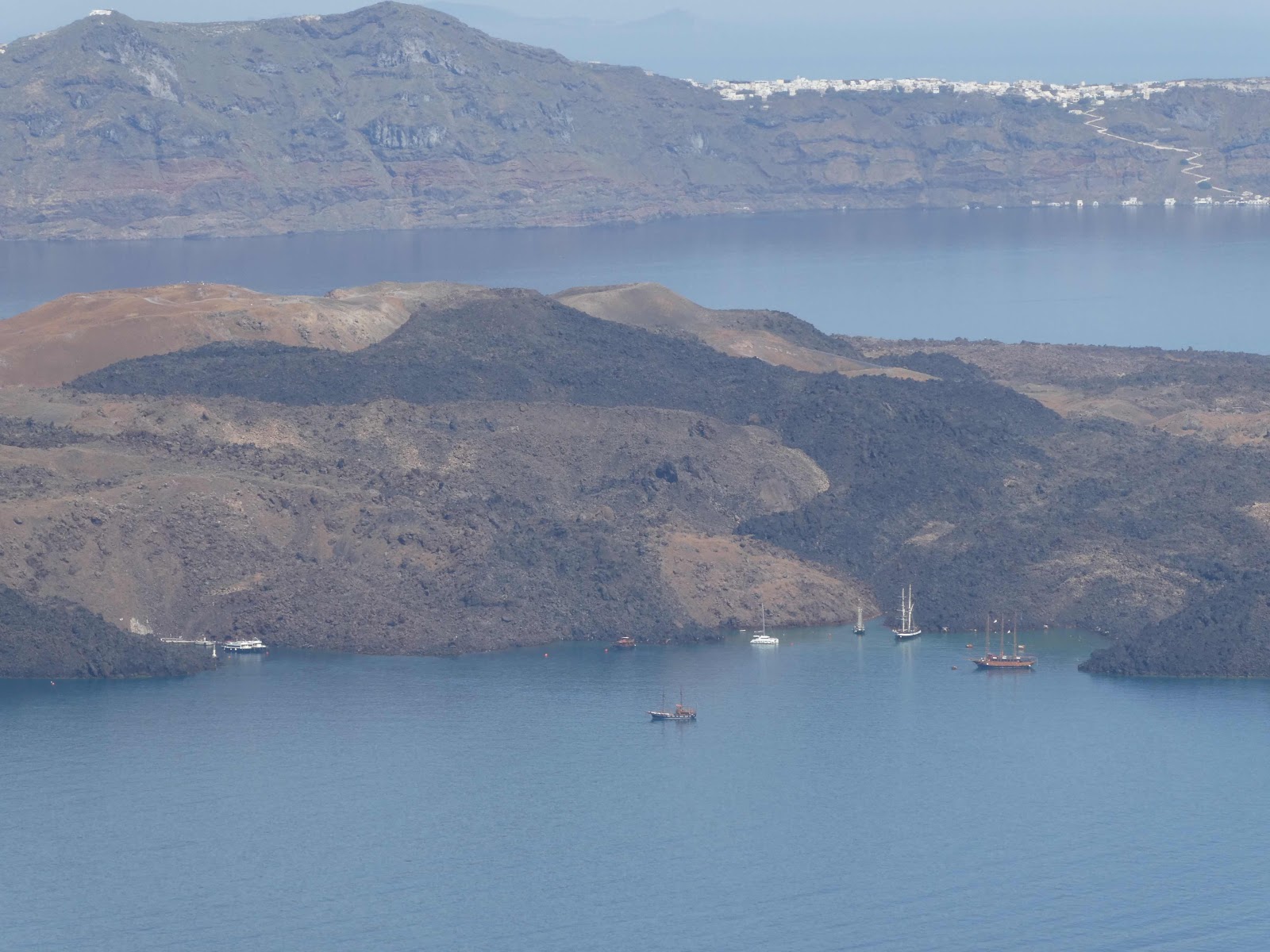 In the centuries that followed, there have been other, less powerful, eruptions, such as thosebetween 1707 and 1711 which created the islet of Nea and the most recent, in 1950, which created the youngest volcanic rocks in the eastern Mediterranean. Signs of activation accompanied by intense seismic activity in 2011-2012 rekindled scientific interest in the volcanic system of Santorini.  There was also an earthquake in 1956 which reached 7.7 on the Richter Scale.

There are amazing rock formations on Santorini - you see all the different colour of the layers wherever you look.

The following photos are either of the rock formation or our sail-away or both. 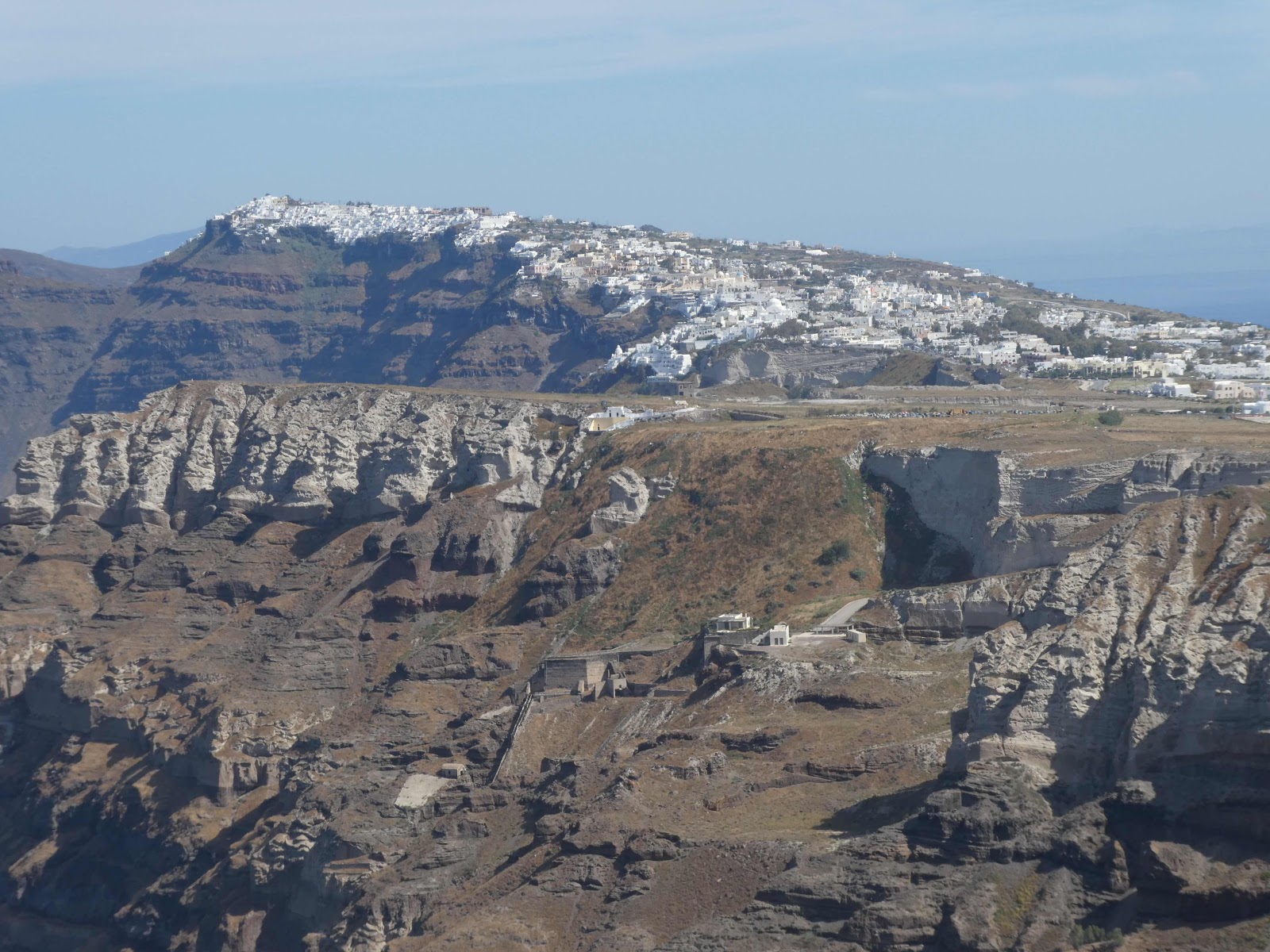 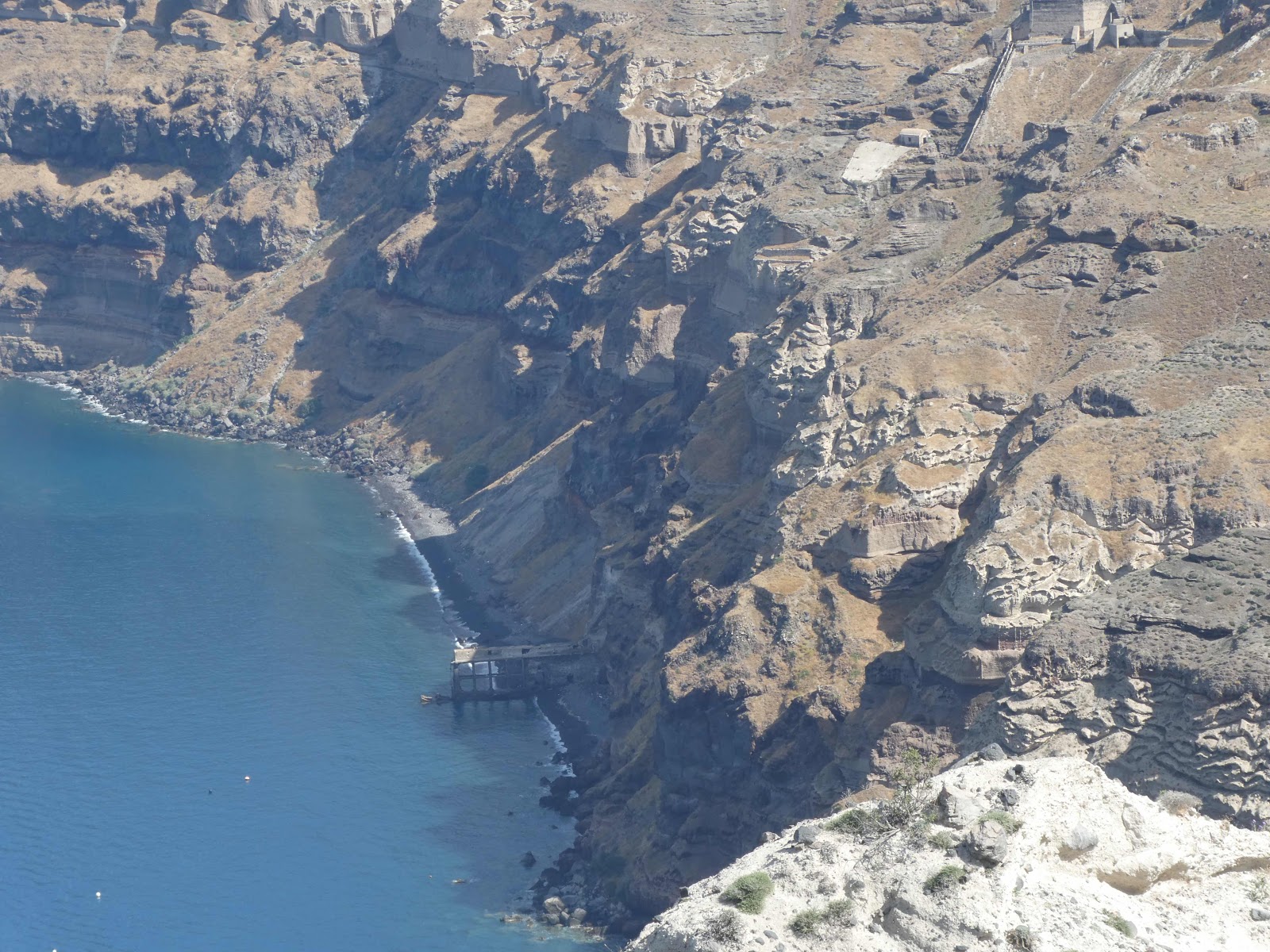 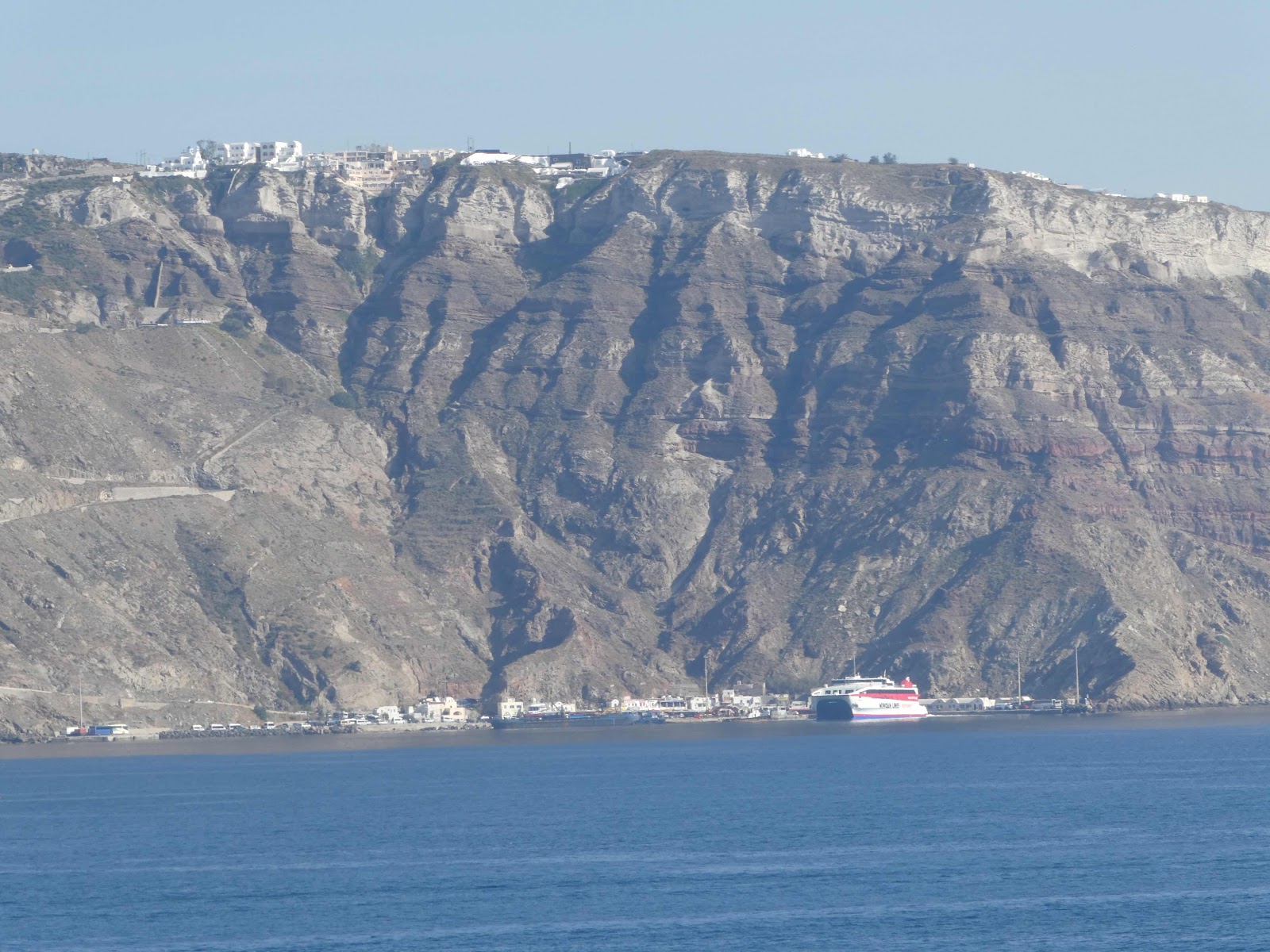 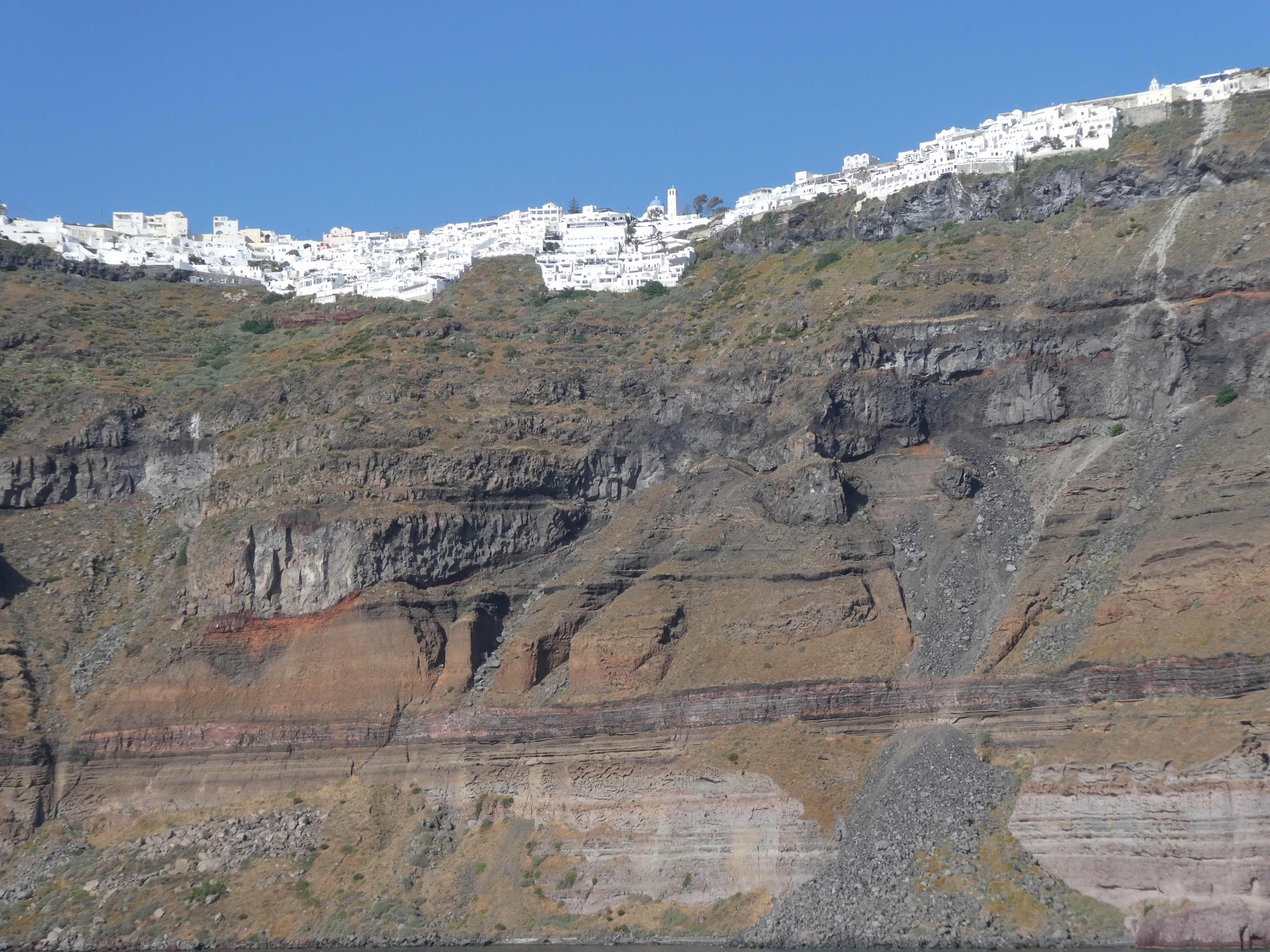 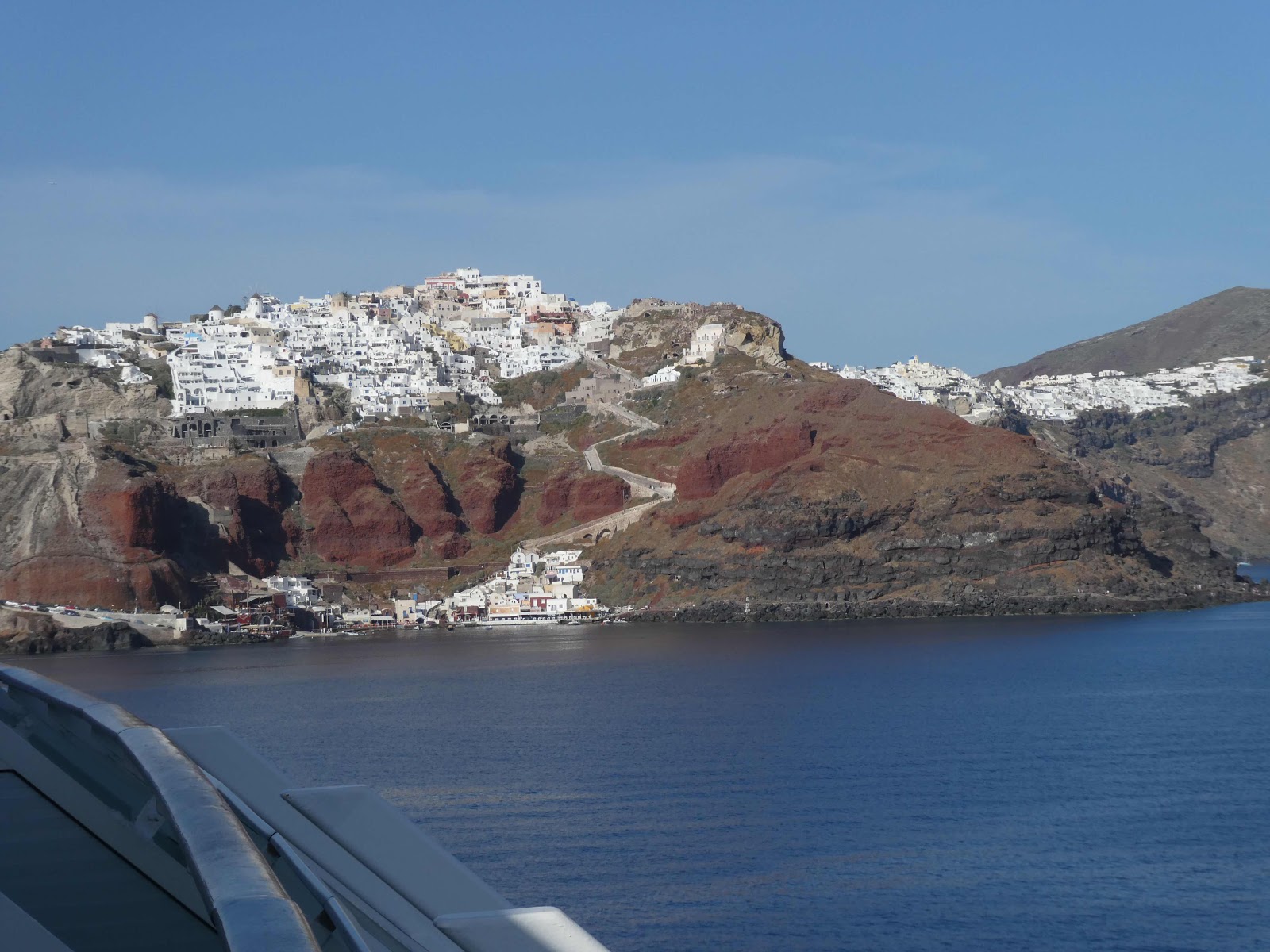 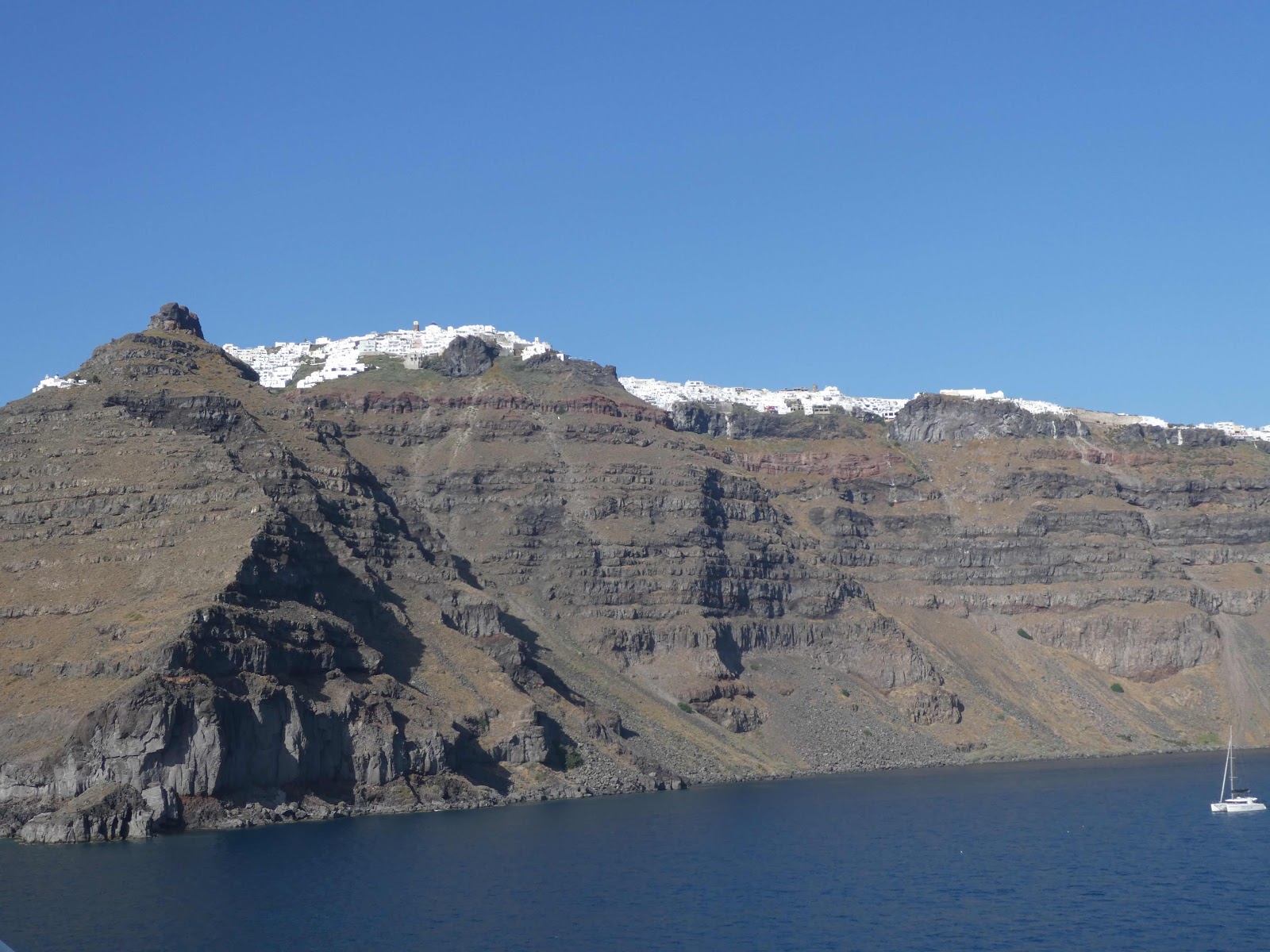