We were up latish but away by 10am.  We set off through the centre of Banbury where there really is a mess. There used to be a lovely bridge across the canal that was always covered in flowers in the summer.  This is all that now remains ☹ 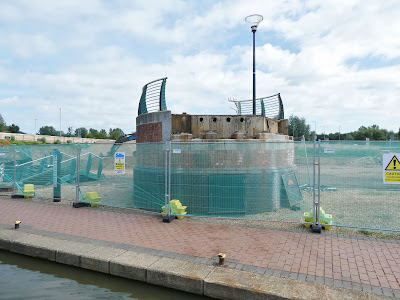 Under the lift bridge and then down the lock – it was too early on a Sunday for gongoozlers.  We pulled over at the services for water – the toilet facilities have been out of order for ages now.  I left Richard to it and went and took back some clothes I had bought which I really don’t need and then made my way to Morrisons for a top-up shop as there is really no more shopping until Oxford. 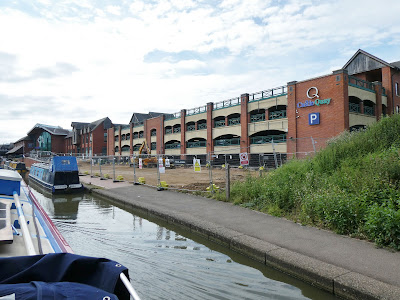 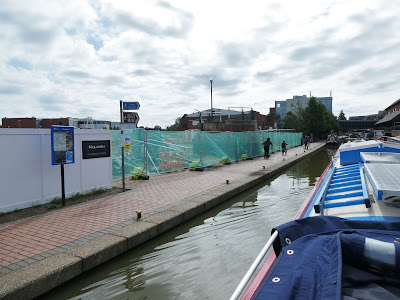 Back at the boat Richard set off while I put the shopping away – a job I really don’t like very much though it is nice to see the work surfaces empty when it is done.  We pulled in for lunch, but as we were getting ready to leave a Black Prince hire boat, Meggie, came ploughing into us with a terrific bang.  Both our first thoughts were for our new paintwork!  The hirers were very apologetic, but the boy at the helm, about 10ish I would say, didn’t say a word.  I’m not sure if there are any rules about children steering but we were moored on a straight stretch of canal so there really shouldn’t have been a problem.  The boy was sat on the taff rail so I doubt very much if he could see over the roof of the boat. The damage is only minor, but it is still damage and shouldn’t have happened.  I have written an email to Black Prince – I wonder if I will get a reply.

The rest of our journey was uneventful – thank goodness.  We had hoped to moor at Aynho and there was one spot left when we arrived – just made for Mary H.
No visit to Aynho Wharf is complete with a visit to the Great Western Arms.  An excellent meal as usual and Richard said that the beer, Old Hooky, was first rate.

As I said yesterday Banbury centre, around the canal is a building site.  The multi-million pound development will include a supermarket, hotel, cinema, six restaurants, parking and cycle and pedestrian bridges over the Oxford Canal and River Cherwell.  A 10-screen cinema, 117 room hotel and 30,100sq ft of supermarket retail space are among the dazzling attractions promised at a new Oxfordshire shopping complex.  The owners of Banbury's Castle Quay district are investing £60m to create what they call 'the future of moviegoing' and the 'future of dining'.  The whole development will be anchored by a new Lidl supermarket, a 'Light Cinema' and a Premier Inn hotel.  Have a look at the video on this link to see how all this will affect the canal – Oxfordmail. 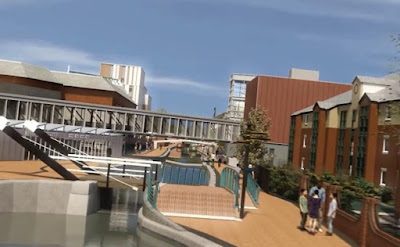 Posted by Linda Gifford-Hull at 10:40