A very different day today – grey and chilly though, for me, it was still crops and a t-shirt.

We weren’t too sure where we were heading for but Banbury was favourite though apparently, it is like a building site at present, but I need to go into town but that shouldn’t take long.  However, first there were a number of locks to tackle – 12 in all to get to Banbury. 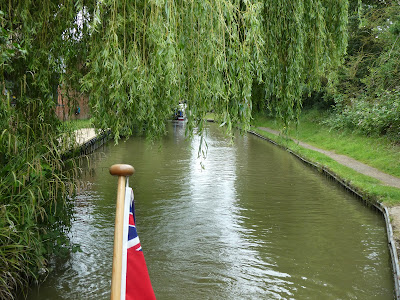 I had to do 99% of the steering down the locks today as I had a fall the other day at home and I have a really nasty cut on the bottom of my left foot, which is very sore.  It hurts to walk on plus I wrenched my right shoulder and winding lock paddles isn’t good.

The five Claydon locks were great with boats coming the other way.  The next three we had to turn.  Cropredy was ready for us to go in thanks to a very nice man who was about to turn it for himself.  We stopped at the services to dump rubbish and toilet but didn’t need water.  Then it started to drizzle so Richard pulled over and we had some lunch before setting off again down the last three locks into Banbury.  As we were clearing the dishes away we heard a low droning noise and thought that it was a helicopter but, in fact, it was Britain’s only Lancaster Bomber.  It really was an amazing sight as it was very low.

Muffin keeps telling me to tell everyone that he got attacked by five Pointers today.  He is rather a drama queen - it was more like he got mobbed!  He was very brave but in the end sought sanctuary back on the boat – I didn’t blame him!
After our last lock of the day, Hardwick Lock, we noticed a new building surrounded by razor wire.  It seemed to go on for ever.  Anyone who knows me will guess that I was straight onto the internet to find some information!  It would appear that a company called the DCS Group invested £12 million back in July 2017, in a new 25 acre Banbury headquarters. The site allows DCS Group to handle huge volumes with a massive lorry parking area with space for 26 trucks and trailers which also has 6 new fast-track loading bays.  DCS is the Official UK Sales and Distribution company for Unilever, P&G, SC Johnson, Colgate, L’Oreal, Gillette and many more. It is not only sales and distribution, they manufacture for Wilko, Poundland, Lidl, Aldi, Wingman, Godrej, Enliven, BIG W Australia and more. DCS owns the Enliven health and beauty brand which is sold in 75 countries worldwide.  The warehouse holds around £16 million worth of stock.  Oh, and Amazon are next door!

I love this house as you come into Banbury.  Today you can see a man in a pinkish towelling dressing gown who is just about to get into his hot tub.  Great view for both him and boaters! 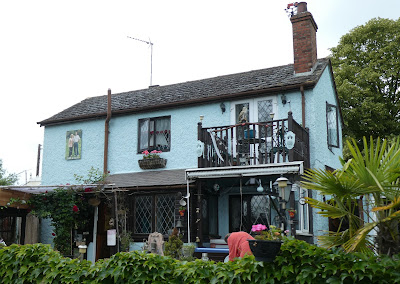 Banbury centre, around the canal, is apparently like a building site so we didn’t want to moor there but fortunately there was room at the edge of Spiceball Park.  We had only just tied up before the rain came down - quite heavily.

Posted by Linda Gifford-Hull at 12:21