A short blog post today as it was such a quiet day.

A bit cooler today thank goodness.  However, Richard was really pleased that, before we set off, the solar panels were charging at 22 amps.


I thought I would show you the new artwork for Mary H.  I chose it after hours of trying out different fonts – I just love it. 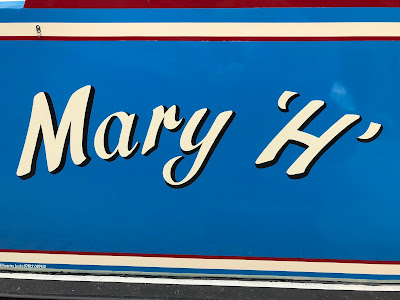 We were on the road about 9.30am which is quite early for us.  Mind you I did have my shower while we were underway.  It would be really nice to spend a bit of time here on the South Oxford, but we need to chug on to the Thames as we have guests joining us in Oxford next Friday. 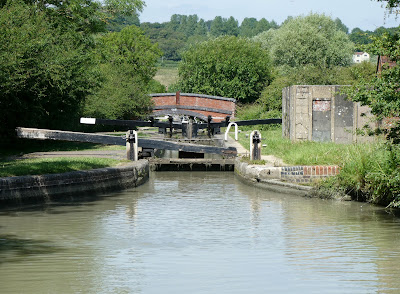 We passed a field of diggers moving soil around – Richard says that the site is going to be part of HS2.  I am not someone who thinks that HS2 will benefit many people but that it will spoil a great deal of the British countryside.  I found this comment on the C&RT website.  The proposed route of the High Speed Rail Network (HS2) will change the waterway landscape forever, affecting 17 canals, three river navigations and four waterways planned for restoration. It poses a real threat to the future use and enjoyment of the waterways.  I will say no more.

The journey along the summit pound was uneventful (thank goodness)!  We passed Wormleighton Reservoir which is used to top up the Oxford Canal.  In 1787 the Oxford Canal Company agreed to purchase 18 acres from Lord Spencer for £1373.80.  The reservoir itself covers 12 acres and holds 2,860,000 gallons of water. 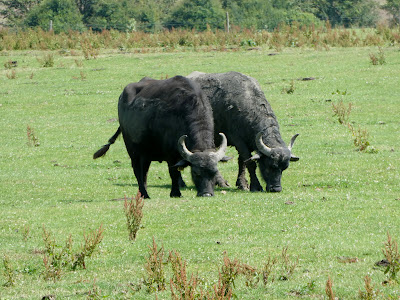 Richard pulled over before Claydon top lock for lunch and, in the end, we didn’t move for the rest of the day.  We both spent our time doing a few chores - most of them being blue!  My main job was to sort out the cupboard in the bathroom – I was quite impressed as there weren’t too many pills and potions that were past their sell by dates!

The only trouble with our mooring today was that it was in a nice shady place at lunchtime but later on the sun came round and it was very hot.  I cooked a stroganoff and the temperature inside the boat went up to 33°!  We sat outside until 10pm though I did put my fleece on for the last half hour or so.

I didn’t take any photos today so today's are a few more from yesterday.

Posted by Linda Gifford-Hull at 15:14