We woke up to rain but as Richard was taking the car home it didn’t really matter.

I spent most of the morning installing a printer.  We had one on the boat some time ago, but it didn’t really get used so it got disposed of.  However, since meeting my second cousin once removed the other day I am now deeply into the family trees and it was taking me ages to write things down from the internet then transferring them on to the trees so I have bought a cheap printer – the ink costs more than the printer did!!  I have also bought a new programme which was recommended by said second cousin once removed!!  I will have a go with them tomorrow.

I took Muffin for a walk along the Thames Path.  I think this boat has been here for quite a long time! 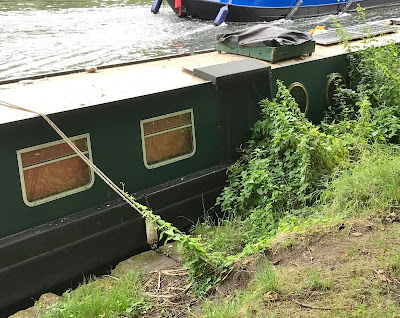 Many moons ago when I lived in Shepperton, I was an Assistant Scout Leader.  One summer the Scouts made rafts and then we took them down to this spot to float them.  It was great fun, but it was interesting to see which ones floated and which didn’t! 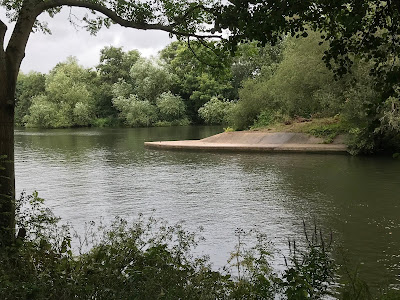 I passed D'Oyly Carte Island which has always intrigued me.  The island was originally called Folly Eyot until Richard D'Oyly Carte bought it around 1890 when it acquired his middle name and surname.  Richard D’Oyly Carte was the producer of the Gilbert and Sullivan comic operas from 1875 to 1896, founder of the Savoy Theatre and Royal English Opera House (now the Palace Theatre) in London and a hotelier.  Carte intended to use the house as a special secluded annex, accessible by boat, to his new Savoy Hotel, but a panel of the local magistrates refused to grant him an alcoholic drink selling licence for the property.  Carte's widow, Helen, sold the island, and, as of 2019, it was again for sale for £3.2 million.  Helen D’Oyly Carte died in 1913 which made me wonder what happened to the house from then until now.  I found a reference to a George May who was made Baronet of the Yeot in 1931 and then made 1st Baron May of Weybridge in 1935 as once living there.  There is also reference to it being a hotel, Eyot Hotel, in 1955 and finally flats in 1960s.  It is no longer on the market so I hope that someone has bought it and will renovate it to what is was.  This website, The Steeple Times, has excellent photos of the inside of the house along with a floor plan. 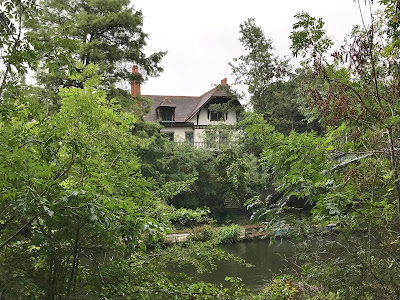 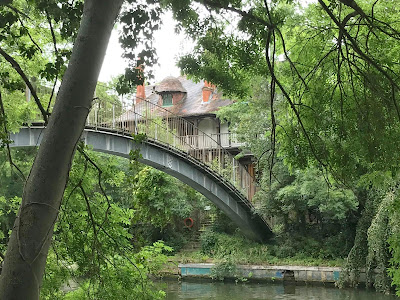 While I was researching D’Oyly Carte Island I came across this house on Zoopla - £30 million!!!

And finally, Nauticalia where I worked for a while.  I went as Assistant Manager in the shop but the boss found out I had been a secretary and made me his secretary – not what I wanted and not a great success.  I couldn’t wait to leave ☹ 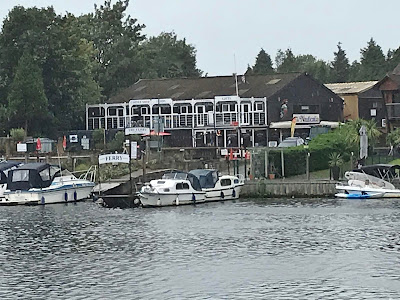 Richard got back about 2.45pm and we thought about moving but with the rain and the wind we decided to stay put.


As I hadn’t taken my laptop home (I felt quite naked without it!) I spent the afternoon catching up and making a few plans!!

I don’t think it really stopped raining all day, but we did need it.
Posted by Linda Gifford-Hull at 10:11