We are off upstream today.  I so feel sorry for “Old Itchy Feet” though as he has been in the same area for 11 days but I am relieved that he hasn’t grown any horns or, even worse, exploded!!

What a difference a day makes.  This is a photo of the weir opposite us today followed by the photo I took yesterday. 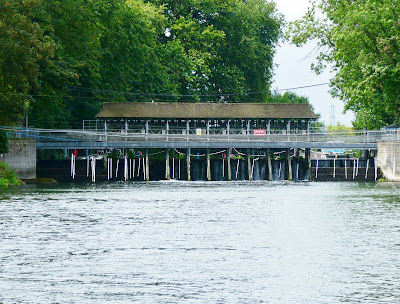 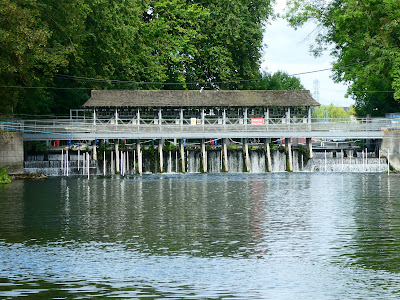 Up through Shepperton Lock, dumped the dumpables then on to get water at Chertsey Lock before going through. 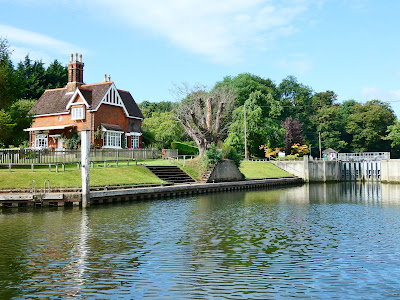 We shared Penton Hook Lock with another narrow boat, and I have to say that their way of coming into a lock looked somewhat complicated!  Her at the helm, him on the roof (we are going up) holding centre and bow line.  As they get in, he jumps ashore ties up the centre rope then the bow line before going to the back to take the stern line and passing it back to her.  He then lets the centre line go and he holds the bow line.  We come in; I lasso a bollard then Richard does the same – I think I prefer our way!  I apologise if anyone who reads this does locks the complicated way - I would appreciate some reasoning of why you do it that way.

We moored up in Staines so that I could go to Sainsburys.  I did a big shop on Monday when I had the car but, as usual, forgot all sorts of things!

Staines-upon-Thames was historically part of Middlesex but is now in Surrey.  It was known to the Romans as Pontes or Ad Pontes, then as Stanes and subsequently Staines.  When I lived in the area the town was known as Staines however it changed its official name to "Staines-upon-Thames" on 20th May 2012.  On 15th December 2011, Spelthorne Borough Council resolved by 25 votes to 4 with 6 abstentions to change the name of the town to Staines-upon-Thames.  The idea was to try and boost the local economy by promoting its riverside location, and reportedly to discourage association with the fictional character Ali G, as well as rock band Hard-Fi, who described Staines as "a ghost town".

Bell Weir lock is a side filler and always an interesting experience!

We moored up at the Runnymede moorings or, as some call them, the Egham Towpath Moorings.  We have never stopped there before, and they were really nice except for the aircraft!  We were moored in front of a large green building and we had no idea what it was – it is a bonded warehouse for UK Duty Free.

We had a wander up to the park and, lo and behold, there was a café with lovely whippy ice creams 😊

During the evening, every time a plane went over, it would drown out the TV and, of course, it was always at the most inopportune moment and I’m sure we missed some very important bits of our programmes!