It was time to move on or should that be move back?  The wind seemed to have died down which was a relief.  Sue and Andy had left at 7.30am – they must have crept passed us as we didn’t hear them.  I thought that Richard would go up to the head of the navigable river to turn around, but he turned where we were.  So, no photo opportunity!

I’ve had a couple of funny cow incidents at Lechlade written on my Facebook page.  I hope the writers wont mind me putting them on here.  Allan Keepingup said – “last time we were there one of the cows picked up our mop which was on the roof and, holding the stringy end in its mouth, swung the stick round and round and chased the other cows all over the field with it. Good game! We got it back undamaged 15 minutes later” and
Martin Clark said “you were lucky it was only the cows licking the dew off the boat that woke you up. Last time we were there we were woken at 6 am by the boat suddenly rocking around and discovered that a cow had slipped and fallen into the river between the boat and the bank and was forcing its way out along the side!” 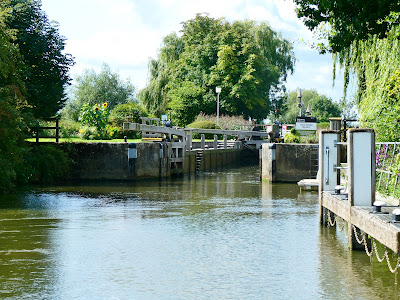 The Lock Keeper at St. John’s Lock was very pleased to see us as we were the first people he had seen all day!  He is only a young man and lives on his own in the Lock Keeper’s cottage, so I guess in winter it could be a bit lonely.  He explained to me that each lock has a cottage for the lock keeper and a second one, or the main one is semi-detached, for a relief keeper.  However, these days that cottage is let out - they are not allowed to be sold. Relief keepers live in their own homes but are given a company vehicle as they have to go from lock to lock but there is a shortage of relief keepers.  There are two categories of locks – ‘A’ and ‘B’.   ‘A’ locks have services, issue licences or similar which need a keeper there but ‘B’ locks are put on self-service when the Keeper has a day off.   I did point out that some locks always seem to be on self-service, but he didn’t know the answer to that!  I asked him about the locks with cafes which seem to be closed.  The cafes are private businesses often run by the Lock Keeper’s wife.  The original keeper at Sonning retired so the café closed down though apparently the new keeper wants to start it up again.  Mapledurham café has closed as it was run but a private individual whose lease wasn’t renewed.  So, it wasn’t an Environment Agency directive. 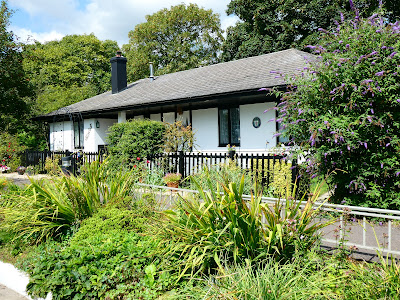 The board at Buscot Lock was on self-service as the Keeper was mowing the grass.  However, he stopped and helped us through.  He said that with the rain the grass is growing really quickly.

We stopped to get water at Grafton Lock.  The board said Lock Keeper on Duty, but he was also mowing the grass but stopped his mower to see us through.  Interesting how two Keepers can differ with their boards.

Next was Radcot Lock where the three photos are from.  I do like the Lock Keeper’s bungalow here.  We also had two trainee volunteer lockies helping. 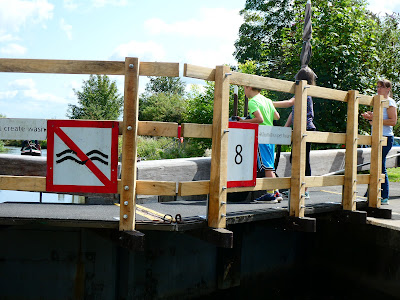 Our journey today was a bit of a magical mystery tour as we didn’t know where we were going to find Sue and Andy.  I got a message from Sue to say they were at Champagne Lawn!  After a bit of thought I realised she meant where we had met them last week.  You may remember that they came round for drinks that evening.  Sue had messaged me and asked what they could bring so I gaily said a bottle of your best champagne.  She only came round with a bottle of proper champagne!  I will have to careful what I ask for now!

When we got to Champagne Lawn a small motor cruiser had moored in the huge space left by Andy and were having lunch on the bank – proper picnic with table and chairs.  We got in on the end and moored up.  While we were busy Muffin took himself off to the picnic table and found chicken bones on a plate on the ground and helped himself!  They were not best pleased.  I apologised profusely but the little horror did it again – this time when they were doing tai-chi!  I have to say that I thought they might have moved the bones!

We sat out with Sue and Andy having a little tipple (read into that what you like).  It was 8.30pm when we finally went in – it had got a little chilly by then.

Posted by Linda Gifford-Hull at 11:09