I had a dreadful night.  I just didn’t feel right – not sure what just not right!  I switched the light out and must have slept for about 45 minutes – then I was awake feeling slightly sick.  I tried to go back to sleep but my “sleep brain” wasn’t having any of it.  I switched the light back on and played on the iPad (I know I shouldn’t!) and finally got to sleep about 3am.

This morning I felt groggy, so I turned over and went back to sleep until 10am.  It was raining so there was no rush anyway.  I got up, had a shower and felt a lot better.  Goodness only knows what was going on last night. 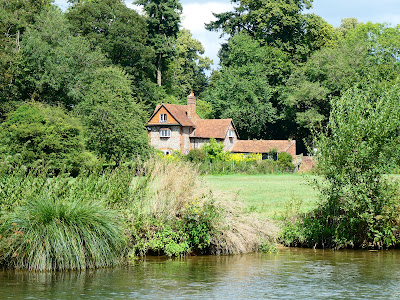 We set off about 11am.  Up through Marsh Lock – only two boats in there today thank goodness.  Shiplake Lock was on self-service and it was a bit chaotic, but I managed to get one narrowboat, two large motor cruisers and a small launch in – I felt very pleased with myself.  As the water rose a chap, who was coming down the river, was telling me that when they were going up river the lock was on self service.  A small rubber dinghy with two men and three dogs went into the lock first.  It was suggested to them that they go further back but they said they would be fine.  As soon as the sluices opened the dinghy capsized with the rush of water and the men and dogs fell in.  I do hate these rubber dinghies.

We pulled in at the Shiplake services to empty the toilet cassettes and take on water.  Even with the large bore hose that is common on the Thames, it took ages to fill – thank goodness we did fill up or we could have run out. 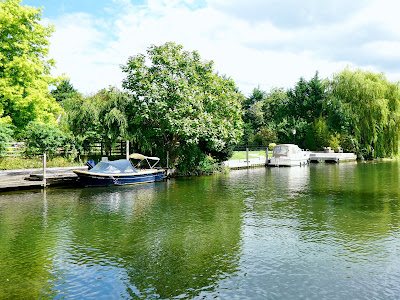 Sonning Lock then we pulled over after the lock and that was us for the rest of the day.

By the time we stopped I was feeling rough again, so I went and had a sleep and felt better for it. 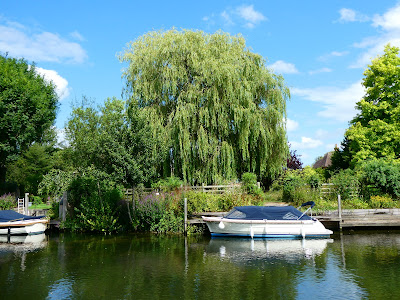 The moorings above Sonning Lock border the Blue Coat School.  The school, an independent day school for boys aged 11-18 and girls aged 16-18, was established in 1646 at the height of the English Civil War, when a wealthy London merchant, Richard Aldworth of Stanlake Park, left the Corporation of Reading the sum of £4,000, the proceeds of which were to be devoted to "the education and upbringing of twenty poor male children, being the children of honest, religious poor men in the town of Reading." From this bequest, which in 17th century terms was quite substantial, originated the Aldworth's Hospital charity school now better known as the Reading Blue Coat School.  Aldworth, who had been a governor of Christ's Hospital in London, modelled the new foundation on his former school, the boys being required to wear the Bluecoat attire of gown, yellow stockings, and buckled shoes. Aldworth's will further stipulated that the Master of the new school should be "an honest, Godly and learned man" who for his "paines" would receive a stipend of £30 a year. His duties were to include the instruction of reading, writing and ciphering and to "teach the Catechism in the points of Christian Religion."

Posted by Linda Gifford-Hull at 11:59