We left our little idyll and pulled round to go up the lock.  Sandford Lock is the deepest on the Thames at 8 feet 9 inches – it is also just plain big!  The lock is a side filler but also has huge paddles which, thank goodness, they don’t open until the level is almost at the top.  It was a very gentle float to the top.  I know I put a photo of the flats overlooking the lock on my blog post on the way down but this one is better! 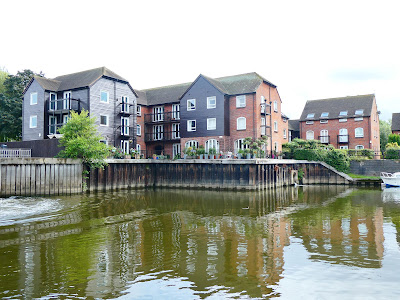 Iffley Lock was next and one of my favourite locks on the whole waterways system.  It is so pretty going in 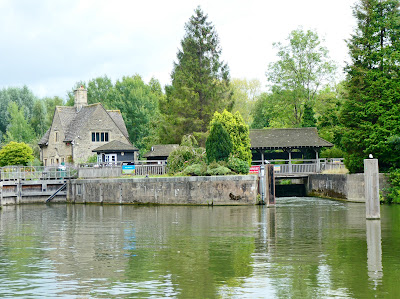 It has a lovely lock cottage 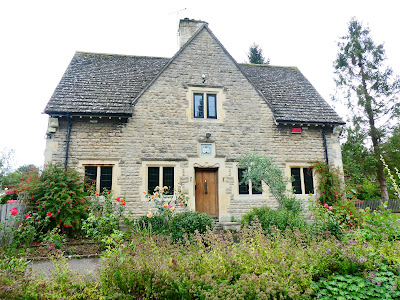 And then there is the folly bridge, which sadly is getting dirtier and dirtier. 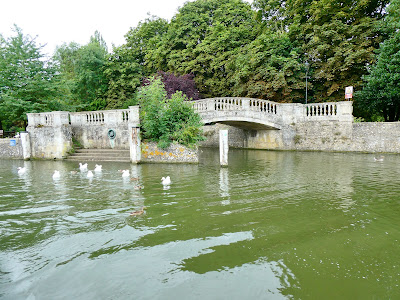 And, this year, it has the added bonus of lavender wafting across the lock from the amazing lavender bushes.  I commented on them to the Lock Keeper and he said that they help to keep him calm! 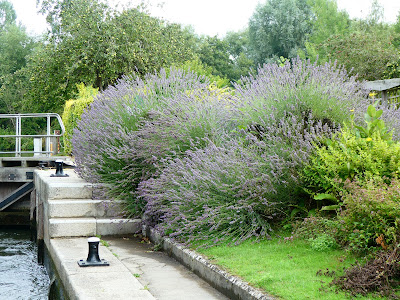 Up through Oxford, under Folly Bridge and on to Osney Lock.  I took this photo from the lock – it reminded me of the fairy doors we saw at Aynho on the Oxford Canal but this time it is human sized. 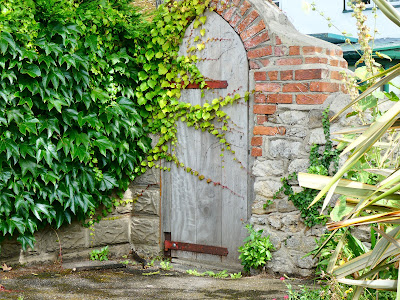 There was room for about three narrowboats at East Street.  We stopped in the first space and interrupted a couple of aged Eastern Asian people.  One was definitely female, and I thought the other was male, but “it” spoke to me in a female type voice!  The lady scuttled off but the other one sat it out!  Anyway, we moved up towards Osney Bridge and left them to it!  (I hope I don’t offend anyone with my wording above!)

Once moored up it was time for lunch and then Richard and I sat and worked out what we needed in the food line.  There is no shopping until we get to Lechlade, unless we get a supermarket delivery.  We emptied the freezer and I noted what was in there – nothing that I hadn’t bargained for!  Richard even gave it a quick defrost.  I couldn’t help giggling at the planning that was going on – anyone would think we were going on a desert safari!!!

A wander down to Waitrose and I was able to get all our supplies.  The Oxford branch of Waitrose has been the first to test their new Unpacked idea.  Waitrose say, “It is designed to test how customers might shop in the future with features including a dedicated re-fillable zone, frozen pick and mix and more loose fruit and veg – all with the aim of less packaging.”  So, my comments!  I don’t think this would work for people on holiday!  Not many people take containers to fill up on holiday with them – especially anyone who might have flown into the UK and are self-catering.  One of the crazy things they have loose are radishes!  I had to take handfuls across to the scales to weigh them.  Fortunately, I had one of those fold up bags in my handbag, so I was able to put all the loose things in there but then when I got back to the boat, I had to sort it all out.  Waitrose sell reusable cloth bags, but they aren’t cheap, and you would need quite a few.  I know we need to use less plastic, but couldn’t we have paper bags?

Back at Mary H the shopping was put away and then we both a restful rest of the afternoon!  No genealogy today – I have been very obsessed with it!