Sue and Andy are early risers, so they crept away from the mooring at 7am – we never heard a thing!  Mind you we were away just after 9am when I saw that the rain was coming in earlier than we expected.  We turned around and headed back to Rushey Lock so that we could empty the elsan cassettes.  Another about turn and we were back en route up the river.

Our first lock was Radcot where it was on self-service but the crew of a narrow boat coming down did all the hard work!

It was a sociable trip from there on.  First, we came across No Problem XL and Sue popped out to say hello.  They had planned to go up to Lechlade but with a wide beam they were finding it hard going and stressful, so were going to turn around and head back down stream.  We will catch them somewhere on our return.

We came across this glamping site.  The tepees looked really nice but there didn’t appear to be anyone at home in any of them and it is mid August.  The site is owned by Ye Olde Swan who also have a narrowboat for hire either as a sailaway or bed and breakfast. 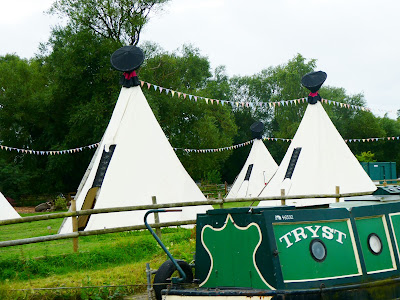 At Grafton Lock we came across a couple who had only picked up a hired motor cruiser a few hours before.  The company had taken them through one lock, but it was manned and suddenly they were on their own in a self service lock!  I was able to explain to them what to do but I’m not sure what they would have done if we hadn’t been there. 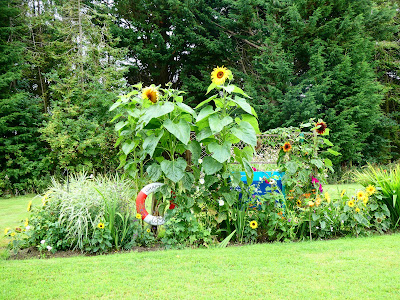 While we were at Grafton Lock, I noticed that NB Waterway Routes was above the lock.  I have been wanting to chat to Paul Balmer of Waterway Routes for some time and had mentioned it to Sue on No Problem. She had very kindly messaged Paul and told him – thank you Sue.  We had a good chat and I am now happy to download the maps and give it a go.  I will report back! 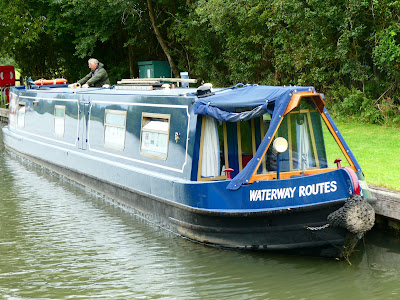 Festina Lente was moored at Kelmscott and we pulled in behind.  The rain had been threatening all morning and we had had a few mizzy showers and it continued while we moored up but then cleared up a bit.

We all decided to go to the local hostelry for lunch – well it would have rude not to wouldn’t it??  The said pub is The Plough Inn at Kelmscott.  Sue and Andy had been before but not to eat.  We were greeted by 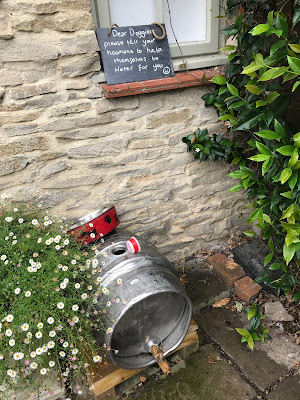 The sign says “Dear Doggies.  Please tell your hoomans to help themselves to water for you”.

The pub is old and lovely inside.  These are the benches we sat on.  The first one was a pommel horse in years gone by! 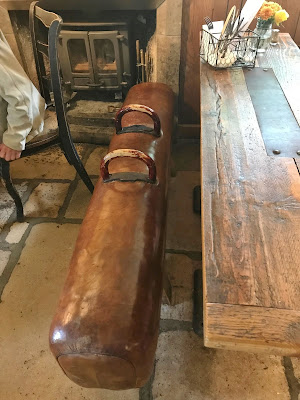 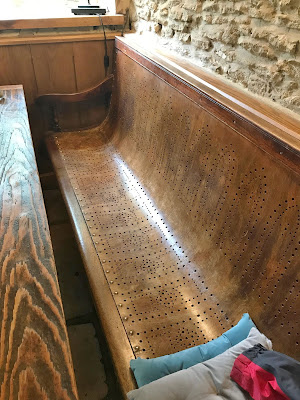 The food was excellent.  Andy and Richard had the pie - both hate pies that are just a pastry lid on a dish of meat, but these ones were proper raised pies.  Sue had a cottage pie which was served in a small (but not that small) cast iron dish which kept the pie so hot she could hardly eat it!  I was really boring and had ham, egg and chips!  I would very much like to go back on our way down river.  I really should have taken some foodie photos but completely forgot.  However, Andy took this one 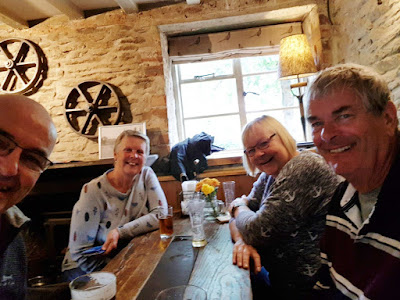 We got back to the boats in drizzle and then the heavens opened – we had timed it to perfection!  After a big lunch and a couple of drinks we had a very quiet afternoon!!!

Posted by Linda Gifford-Hull at 10:09