We headed back down stream to get water.  I had had a message from Sue yesterday to say that Grafton Lock has the last water before Lechlade, but we had already left the lock.  We have now decided to stay in Lechlade for a few days so thought it a good idea to fill up before we got there.

There was no rain forecast but there was some drizzle and the sky was very grey.

We went straight into Buscot Lock which was manned with a Lock Keeper and a volunteer, so we were through quite quickly. 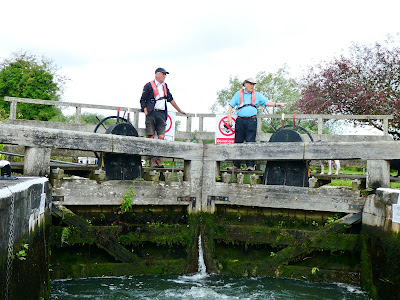 This is the site of Buscot Cheese Wharf (I think!), which was used to send local speciality cheeses to London. These cheeses came in exotic shapes and colours such as pineapples and hares made green using sage. 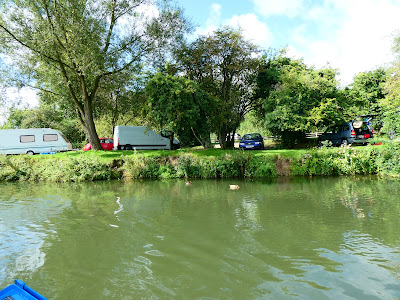 This bridge is called Bloomer’s Bridge which is over Bloomer’s Hole.  Quite why it’s called that no one really knows but there are two theories. The first says that a wagoner named Bloomer disappeared into the water along with his horse and cart and was never seen again; the second concerns a Reverend Bloomer who shocked his parishioners by bathing nude here! 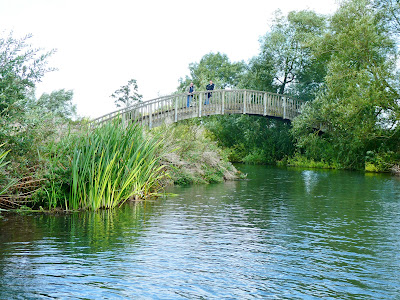 Where the river splits to go to St. John’s Lock and the weir is a little marina.  Here we saw a load of swimmers – all ladies.  They were all very cheerful – laughing and waving.  I told them that I thought they were a little mad! 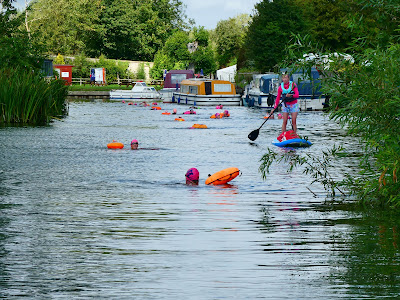 We pulled over before St. John’s Lock to get rid of rubbish and toilet and then went into the lock.  There was a Lock Keeper and volunteer on this lock too.  Along the meadow, passed the heifers and then we moored up.  It was very windy, but I took the risk and put my washing out on the airer at the back. 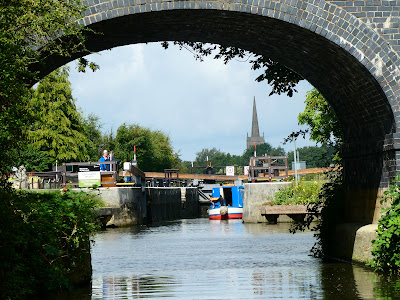 We have covered 113 miles and done 41 locks since leaving Shepperton and are now almost at the extent of the navigable Thames.  When we leave our mooring, we will go to the top to turn around which will only take a couple of minutes.

Richard and I walked into Lechlade in the afternoon, mainly to get something for dinner.  There is a lovely butcher come delicatessen come greengrocers and I bought a pie for Richard and a Welsh pasty for me along with strawberries.  I also got a boned leg of lamb for dinner tomorrow.