Two blogs in one - Wednesday 14th and Thursday 15th August

It rained just about all day though there were some clear periods in the afternoon and some boats moved.  We just stayed hunkered down and I watched Wanted Down Under hoping the sunshine would improve my grey mood!!

I wondered why Pinkhill, or back in the early 20th century – Pinkle, but I couldn’t find anything so was there once a pink hill or maybe Mr. Pink owned the hill.  I really don’t like it when I can’t find out an answer to my question!
A little story for a wet day.  My children (and their partners) never use a landline only their mobiles.  Well Robert decided to connect the landline up and Tobyn (three next month) has been using it.  I got a message saying that he had the phone in his hand, so I rang it.  “Hawo” said the voice on the other end.  I said “hello Tobyn, its Granny” his reply to this was bananas, ice cream and fruit salad!  Robert works for Waitrose and Laura often rings him with a list for him to bring home – Tobyn obviously thinks this is what the phone is for!!  I do hope that Tobes doesn’t ring Russia or America one day.

Wahey – no rain though a tad windy.  I had to get the extra long pole off the roof to push the bow out so we wouldn’t hit the boat in front.

We had been woken up in the night by the TV switching itself on!  It woke Richard first, which is unusual as he can normally sleep through anything.  When I woke up, he said that the noise was coming from the boat in front (don’t forget we are reverse layout) but I could see light coming from the saloon.  It was really weird – I hope it doesn’t happen again.

As I have said before, this part of the Thames is windy (that is wiggly and not breezy as in the first paragraph!!)  We hadn’t been going long before I heard Richard put the boat into a hard reverse then there was a terrific crash.  A hire boat was coming towards us on the wrong side of the river and on a bend.  We hit him bow on so hopefully not much damage to Mary H, but I guess there might be a dent in the other boat.  Needless to say, we were pushed into the undergrowth and a rotting tree – there were twigs everywhere.  (Update – no damage to Mary H) 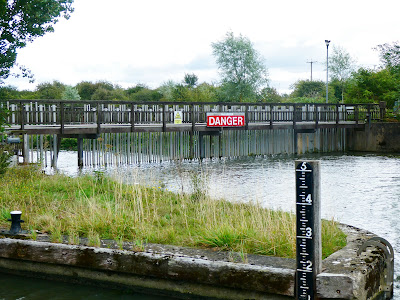 Northmoor Lock was our first lock then Shifford and finally Rushey.  Rushey was on self-service so I had to do the manual ship’s wheel thingy and ended up running all over the place – well not running, I do not do running!

Above Rushey Lock we came across Sue and Andy on Festina Lente who had been just in front of us since we left Oxford.  To be honest we didn’t really happen across them as we knew they were there!!  We did a long day - 4½ hours - to catch up with them.  I had been telling Muffin that he was going to see Sue and as soon as she got off Festina Lente he went rushing over to her – he was thrilled to see her – we all were and Andy too of course 😊 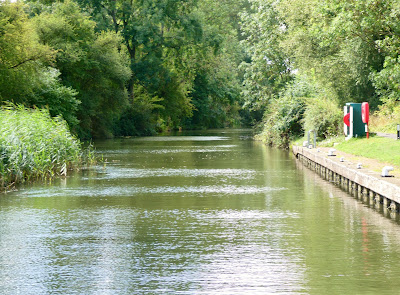 We had a quiet afternoon then Sue and Andy came round for drinks.  We had sorted the inside out for visitors but in the end,  we sat outside on the river bank until 9.30pm by which time it was getting chilly.  I was sitting with my back to the sunset that the others were watching and, sadly, it was too late for a photo.  However, I could see a huge moon rising in the east – it was pretty magnificent.