We had been woken up at 6am by the heifers in the field licking the boat!  This is very common especially in the early hours of the morning.  Nothing is safe on your boat.  We usually have flowers on the boat and the cattle are very susceptible to those!  One year they chewed our centre rope – they didn’t go through it, but it was all soggy and now doesn’t lie flat.  Richard dashed out to shoo them away as they also like to chew the canvas of the cratch and pram cover. 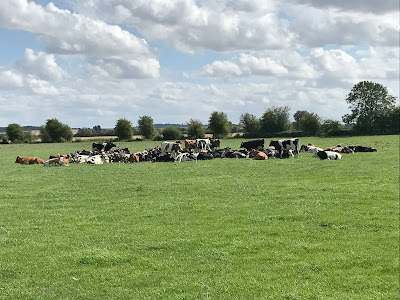 We woke up, at our normal time, to rain which hadn’t been forecast but it soon brightened up though it was very windy.

I’m afraid that I didn’t leave the boat today.  I had planned a walk in the afternoon, but I ended up with having a sleep to try and get rid of a headache.

Here are a couple of interesting facts – well I think they are interesting!

Why is the lock called St. John’s lock I wondered, well both the lock and its adjoining bridge are named after a priory dedicated to St John the Baptist, which has long since disappeared.

There is a stone statue of Old Father Thames at St. John’s Lock.  It was made in 1851 for the Great Exhibition in the Crystal Palace at Hyde Park. After the palace burnt down in 1936, the statue was moved near the river's source at Trewsbury Meads in Gloucestershire. Unfortunately, the statue was vandalised there so was moved to its current location in 1974. 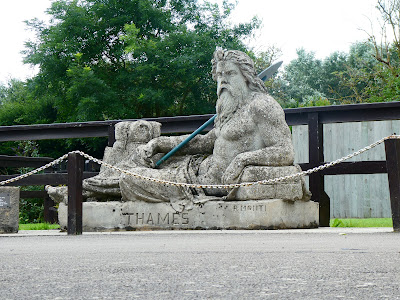 Who is Old Father Thames?  I’ve researched and read a few ideas, but I like this one!

Before becoming Father Thames he was a Pre-Roman priest living in Londinium with the name Tiberius Claudius Verica.  However In the 19th century, Father Thames's sons Tyburn, Fleet and Effra died as a result of the pollution and environmental destruction of the rivers by the city's inhabitants. Father Thames angrily left the city of London and the tidal areas of the Thames in 1858 following The Great Stink. He resettled himself and his 'court' near the source of his river in the Thames Valley.  (Taken from Follypedia)

I have not made a mistake in the years because as a “neo-myth” he is still alive - apparently!  (I'm sure that someone will put me right on this!)

Posted by Linda Gifford-Hull at 11:21