We were a bit late this morning which was a nuisance as we want to get into Marlow today and we really should have left early. 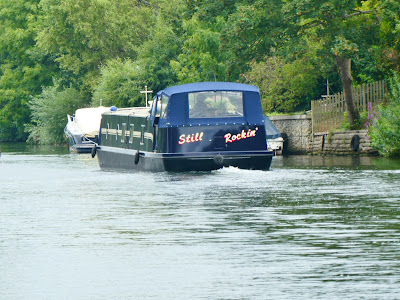 We found Still Rockin again – they were in front of us at Bray Lock.  I had a quick chat with David and Lisa was busy down below.  There were four boats waiting to go into the lock, two narrowboats, one widebeam and one cruiser.  The Lock Keeper called the two narrowboats in (one of which was us of course) and then he tried to get Still Rockin in but she was about 2 feet too long so she had to reverse out and the motor cruiser came in.  We were very near the front gates and when the Lock Keeper opened the sluices he yelled “hang on to your hats at the front”!! 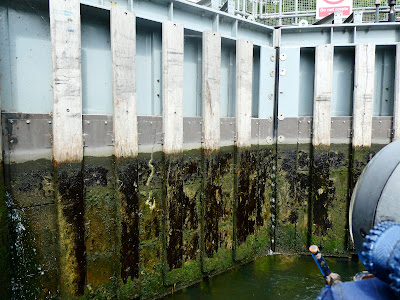 Next was Boulter’s Lock and this time the Lock Keeper was able to get three motor cruisers and two narrowboats in.  Congestion at Boulter’s Lock was a serious problem before World War I, and a novel solution was employed to reduce it. A moving ramp, consisting of wooden slats with chocks to prevent rowing boats from rolling over, was constructed to bypass the lock. The ramp was similar to an escalator, and small boats simply rowed towards it, and were carried up to the higher level while the occupants remained seated in their boat. The boat lift opened in 1909 and was powered by an electric motor. The date of its demise is uncertain, but its location on Ray Mill island can still be visited. 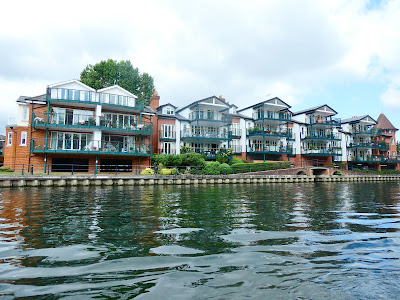 Up Cliveden Reach to Cookham Lock then on past Cookham Meadow – plenty of room there.  This house at Cookham looks to be finally finished but was all shut up. 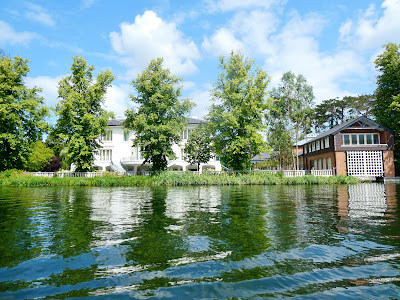 Past The Bounty but, sadly, no time to stop.

Marlow Lock was, for the first time in 43 locks on the Thames, on self service.  Even some of the usual locks have been manned.  The only reason this was on self service was because the Lock Keeper had just gone on his lunch break.  Still between the lady on a motor cruiser and myself we made a smooth transition through.

We needed to stop in Marlow as we have visitors coming on Sunday and I needed to vittle up with the nicer things for lunch!  We couldn’t see a space, so Richard pulled over by some flats by Marlow Bridge and off I went.  I walked up to Waitrose, the furthest supermarket away, and did my shopping.  Meanwhile Richard had found a space and walked up to meet me.  I dumped the shopping with him and walked back to Mountain Warehouse where they were having a sale.  I had seen half price deck chairs outside and we really needed another decent one so bought one.  I walked back and found Richard who was waiting to get an ice cream!

Back at Mary H I got the beginnings of a headache so took two paracetamols and lay down in a darkened room!!  It worked as within an hour or so it had gone.

As I was cooking dinner, we kept seeing people carrying pizza boxes then Richard remembered seeing a pizza boat just down the river – typical when I was already cooking!

Posted by Linda Gifford-Hull at 10:12