We were awake at 7am – goodness only knows why!

When it came time to leave, we were jammed on an earthy ledge and it took a lot of pushing off to get free. 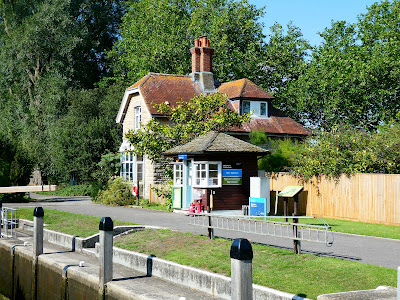 We got water at Shifford Lock and, as the lock was on self service, I went and got it ready.  A motor cruiser came down and followed Richard into the lock.  It was then that I realised that the crew were Mrs. Bossy-Know-It-All and Mr. Down-Trodden.  She came in on the boat and made such a fuss about the ropes bossing her poor husband around who muttered something under his breath!  Another narrow boat came down but as it was a hire boat, she was not having it in the lock with her as “I’ve had trouble with hirers in locks – they don’t know what they are doing”!  As the water level went down, she was on at Mr. Down-Trodden all the time – let this rope out – pull that rope in.  After we had opened the lock gates, she said that she was getting on her boat and that the hirers could shut the gates!  Needless to say, I shut mine and by the time I had got round to the other side Mr. Hirer was closing the gate.  I said to him that they could have got in the lock but that the motor cruiser wasn’t having it!  He said that the motor cruiser had come up behind him earlier so he slowed down and pulled over so they could get passed – he got no recognition from them at all.  Strange lady as, in fact, she was very chatty to me and seemed OK. 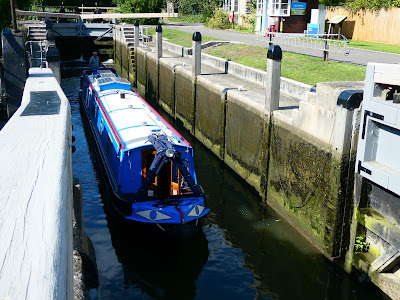 It was a nice trip down to Newbridge.  I was steering, which is quite unusual, but I really enjoyed it.  Festina Lente was moored up in their own little space on the meadow before Newbridge and we pulled in just after them.  The bank is very high there and of course Muffin had to try to get ashore and ended up clinging to the bank – thank goodness we had a harness on him.  We now have a very steep angle on the gang plank and Richard has put a rope in to help pull ourselves up. 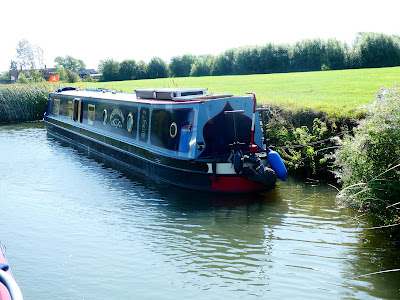 Richard and Andy went off to the pub for a few pints of Abbot Ale which is 5%.  Richard came back smiling (!!) and promptly fell asleep!  In Bury St. Edmunds - the home of Abbot Ale - brewing can be traced back 1,000 years. In fact, the Domesday Book records “cerevisiari” or ‘ale brewers’ who served the Abbot in the town’s Great Abbey.

I didn’t get off the boat in the end but had a nice peaceful afternoon having a doze and caught up on Tuesday’s Holby City.

The village of Newbridge was grown up round the New Bridge - a 13th-century bridge which is one of the two oldest surviving bridges on the Thames. The northern span is listed as Grade I and the southern as Grade II*.  It was built by monks on the orders of King John in order to improve communications between the wool towns in the south of England and the Cotswold farms.  It was originally much longer than it is now, with 51 arches and being 726 yards long, compared with the current 12 arches (I only counted 6 but maybe the others are hidden somewhere).  In 1644, in the Civil War, the Battle of Newbridge was fought on the banks of the river. Parliamentarian William Waller attempted to cross in order to surround Oxford and capture King Charles but was defeated.  I guess the battlefield is probably where we are moored. 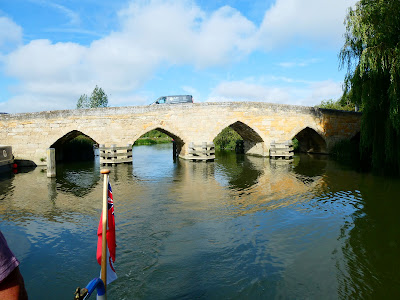 Posted by Linda Gifford-Hull at 09:50