I think Sue and Andy’s early mornings must be rubbing off on us as we were away by 9.30am.  Mind you they had gone passed us much earlier than that!

Under New Bridge and it’s 6 arches!  Maybe one day I will find out where the other 6 are.  Passed the wedding tepees but obviously no wedding this weekend as they didn’t look as nice as last time. 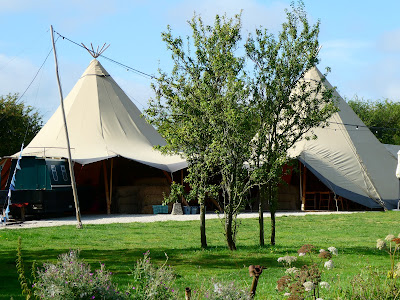 We went straight into Northmoor Lock as there was another narrowboat in there.  I got chatting to the lady at the front who was doing the ropes and it turned out that they have a winter mooring at Ham Manor on the Kennet and Avon where we winter moored for a few years.  When we left the lock, I went and told Richard and he had been chatting to the skipper who told him that they moored somewhere completely different on the K & A – something with a green in it, which I guess could be Greenham Lock but that isn’t Ham Manor!

As we passed Bablock Hythe Caravan Park there was a man walking his cat!  Muffin started growling – goodness only knows why!

We came across Sue and Vic on No Problem XL and gave them a wave.  Hopefully they will move down to moor near us tomorrow. 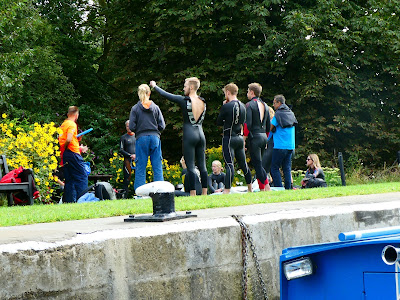 The above photo was taken a few days ago.  It’s not brilliant but it was very interesting watching the young men getting into their wet suits!

We found Festina Lente just round the corner and moored up behind.

We had a quiet afternoon as it was fairly hot.  I had a headache and took two paracetamols and lay down on the bed.  Suddenly there was an almighty bang as a hire boat took the corner wrong and came into us sideways on.  I’m afraid I swore at them – Richard said I shouldn’t have done but when it happens right by your head – and a head that was hurting – I think justifies it.  The Anglo Welsh hire base is just below the next lock and they hadn’t been on a boat before.  I’m not sure that the wiggles of the Upper Thames are the best bit of waterway to learn on.

There are sheep in the next field and there are some escapees who are in our field.  One of them obviously wanted to get back into the other field and made such a fuss – she had a very strange baa.  Sue reckoned she was foreign! 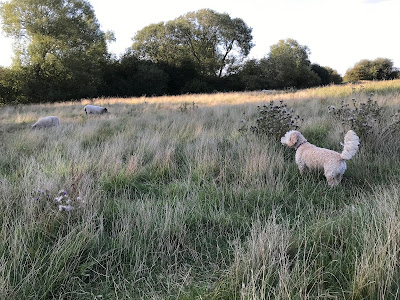 Muffin is more than ready for a clip.  He is being very considerate to the sheep and we think that maybe he thinks they are Cockapoos like him – mind you then have been shorn so have less hair than him!

Sue and Andy came round for a pre-dinner drink as it began to cool down a bit.

Posted by Linda Gifford-Hull at 16:32