Two blog posts in one again for two reasons.  One - when you don't move there isn't much to blog about and two - it was too darn hot!

I needn’t worry about catching Sue and Andy’s early mornings – it was quite late when we finally came to but as we weren’t going anywhere it didn’t really matter.

The weather forecasters had said it would be a hot weekend and they were right.  There aren’t many moorings under trees but fortunately there was a nice breeze which blew through the boat and cooled her down.  The highest it got inside was 28°.

We set up camp outside with chairs, tables and sun umbrellas.  At one stage a family walked across the field and the man came up to us and asked us if we were enjoying it here!  I thought it rather odd then found out that he is the landowner!  He said that he doesn’t mind people mooring here but only for two days but he was quite happy for us to stay longer – this was after he had asked us where we were from.  He obviously realised that we aren’t continuous moorers, so we were OK. 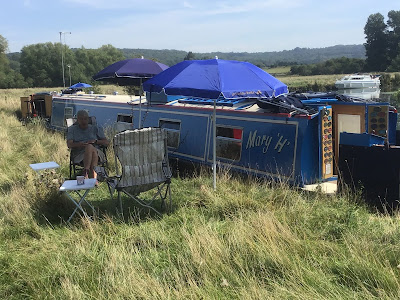 Sue from No Problem XL walked down with the dogs.  She stopped for a chat with us and with Sue and Andy.  They are moored under trees so had decided not to come and join us.  They haven’t got the breeze though.

Behind us is, what looks a lovely place to moor, but it has big No Mooring signs.  A hire boat with 6 young men on moored up right next to the sign!  They had a great time jumping into the river and swimming around – I’m not too sure I would want to do it as the water looks pretty mucky! 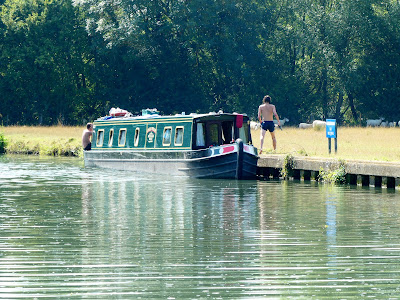 The river has been busy today but mainly with small boats and canoes – oh and two paddle boards complete with a dog on each!  There are quite a few canoes now with electric motors which you can’t see. The Thames Path has also been busy with cheerful people nearly all ready to say hello.

Muffin had his cool jacket on.  He is funny when it first goes on as he stands there giving us “the look” but soon realises that it makes him feel nicer. 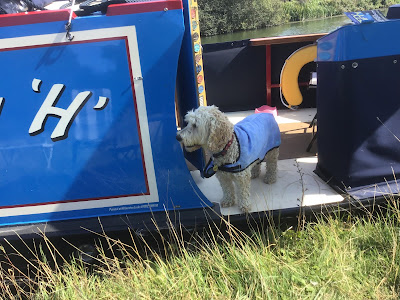 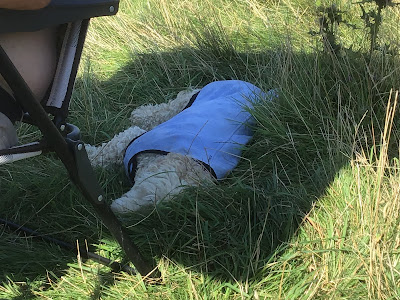 Sue and Andy came up to join us after the rugby had finished – by that time it had cooled down a lot and it was very pleasant sitting on the riverbank.

We had drinks on the terrace again early evening before retiring into our boats for dinner. 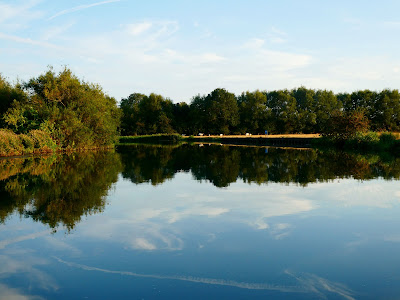 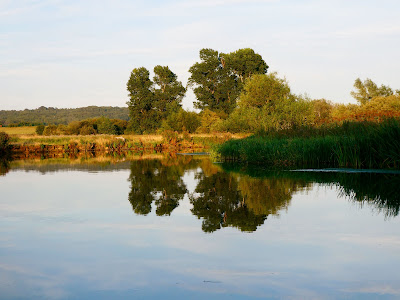 Another day of doing nothing.  Sue and Andy went for a walk round Farmoor Reservoir – too much for me on such a hot day.

Sue (No Problem) came down to see us but she arrived saying that a sheep was stuck in the mud and could Richard and Andy please rescue it.  Andy grabbed a rope and off we trotted.  The poor sheep was well and truly stuck, and it took three people to pull her out.  Once out she just lay there – I guess she was exhausted as no doubt she had been struggling to get out in the heat.  Eventually Sue got one of her dogs to gently walk near the sheep and that got her up and off to join her friends in the shade.  Sue did the visiting rounds and then walked back to No Problem however she found another stuck sheep so off went the Rescue Team to do their bit again! 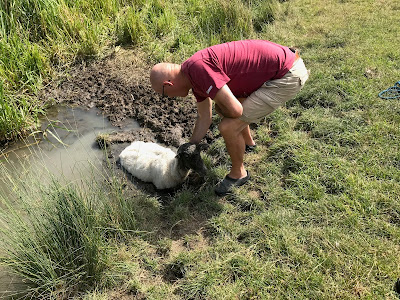 It was certainly hotter today then yesterday - 30°+ so we sat outside under the sun umbrellas.  I was using my iPad when suddenly across the screen came a red EMERGENCY followed by this iPad is too hot and will shut down until cool!  I have to say that it was in the direct sunshine.

The Thames Path was a lot quieter today with very few families.  The river was also quiet which was a shame.

The sheep just seemed to spend the whole afternoon baa-ing!  We got used to it in the end, but it was pretty much constant.  Goodness knows what was going on.  Some of the sheep in our field came quite close and I could see a magpie having a ride on one of them. 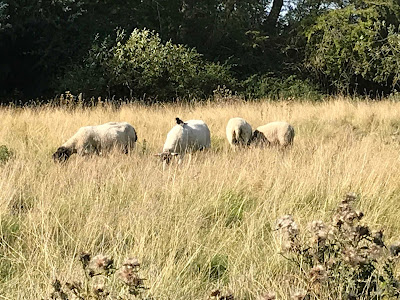 Posted by Linda Gifford-Hull at 11:37