Nothing much happened today.  We had a visit from the property manager as we have been struggling to open the safe which has got our passports and bank cards in.  Fortunately, she had a master key which did the trick.  When we compared her key with ours, they didn’t really look the same!  Natasha has left the master key with us so we should be OK now.

I caught up with the blog in the morning then read in the afternoon.  I haven’t read a book for ages, but I have to admit that I fell asleep.

There is a villa being built just around the corner from us and they use a large crane which we both find fascinating!  The crane is remote controlled and is so quiet, it makes a slight noise as it starts moving which I guess is some sort of alarm but that is all.  There only appears to be three builders so goodness only knows when they will finish!  In the photo you can see a white villa which would have had a wonderful view but has now lost that and most of its light – I’m sure that in the UK the new villa wouldn’t have got planning permission.  We can actually see four cranes – the other three are down on the Paseo in the new Neinor development which caused so much dust and noise last year.  The buildings are more or less up now but it’s still going to be a while before the apartments are finished.  I’ve just been looking on their website and see that there are 1 and 2 bedroom apartments ranging from €124,900 to €231,600 (£105,628 to £195,864).  If you are interested have a look at the Neinor website. 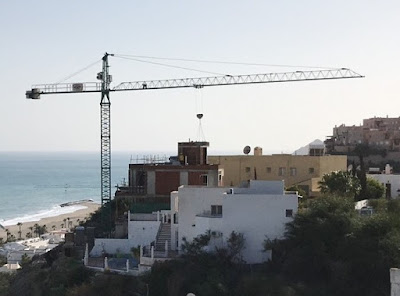 Another day in paradise!  We seem to be getting into a morning routine now.  Richard takes Muffin down to the Paseo for a walk along there while I write the blog and catch up on emails.  After all that it’s almost lunch time.  We really need to get out in the afternoons and do something before taking Muffin onto the beach for some ball throwing.

We had a load of logs delivered in the morning. It gets very chilly in the evenings so Richard lights the log burner however I don’t think we will use all this lot! 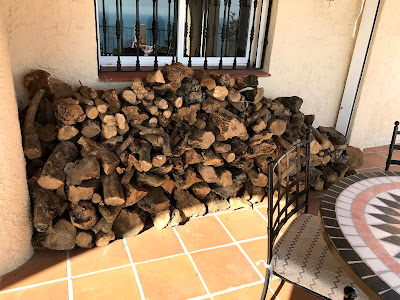 After lunch we went to get some new saucepans.  I had asked on Facebook where I could get a decent set with lids and long handles and I was directed to three places.  The first one was on the Playa and is a second hand store but they also get a lot of ex-Amazon stock.  The last set they had were really lovely, but they don’t have long handles!  The lady told me that she had sold quite a few sets in the morning so I was worried that if we went to the other two places and couldn’t find anything better, she might have sold that one.  I wondered if people had seen on Facebook about the ex-Amazon ones and had gone in the morning! 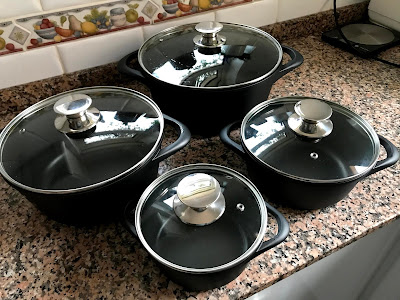 We took Muffin onto the beach.  He is getting so much better at not barking when he brings the ball back to us.  I’m not sure how I am going to stop the treats though!

We have solved Safegate!  Richard was twiddling the car keys while waiting for me and made the realisation!  He had put the safe key onto the car key ring for safety but also on there is a very similar key which unlocks the trailer at home.  We had been trying to open the safe with the trailer key!  Old age really is creeping up on us!  The safe key is now hidden somewhere in the villa.

Natasha popped up to swap the safe/trailer key and to give us some clean bedding.  In fact, she has left the cupboard unlocked so I can choose what I want!

In the afternoon we went to the Mercadona.  I had blueberries on my list but there weren’t any again ☹  I overheard an English couple commenting on the lack of the fruit and one said to the other “we are late today which is why there aren’t any”.  Lesson learnt, for blueberries go in the morning!

After Mercadona we went to Blu for a cuppa and an ice-cream which was rather disappointing. The ice-cream parlour, Gelateria Italiana Alberto, doesn’t open until next month, but there must be somewhere else that does a good ice-cream.  However, Blu do have some fun signs! 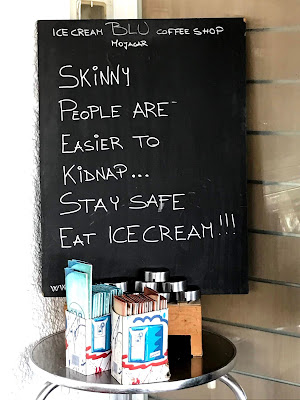 It was them time to take Muffin for a walk on the Paseo.  He is getting rather naughty about, what is I can only describe as, making a noise in the car!  I really don’t think he knows he is making a whining/heavy breathing noise!  It is all excitement as we nearly always take him for a walk if we are out in the car – this obviously needs to stop.  So today no beach.

Whilst we were walking, I saw this lovely bit of hedging.  I have an app called Plant Snap which told me it is called Lantana Camara.  Whatever it’s called, I think it is lovely. 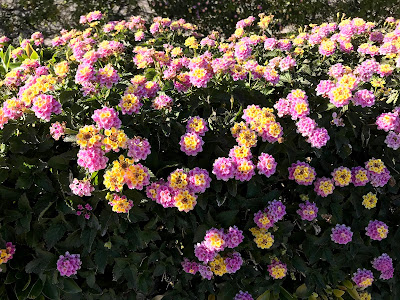 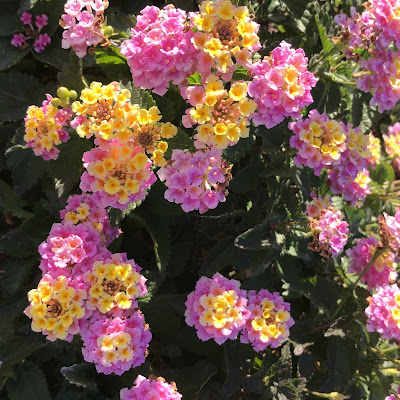