We had to go down to Almeria to meet Penny and Jim at the airport.  Their flight was expected at 11.28am which was 18 minutes later than scheduled.  As we were driving down an Easyjet flight went over us at 11am – oh heck was it them??  Next thing I got a text from Penny saying, “we’ve landed”!  I got a little worked up as I really wanted to be outside Arrivals to meet them.  As it turned out we were there well before them came out.  It was lovely to get a big hug from my big sister after everything that has gone on 😊 We drove back to Mojacar and to the villa.

We spent a quiet afternoon as they were pretty knackered – they were up at 4am!

I got a call from a Tech expert about the laptop and iPad that had been stolen.  Now we just have to wait.

I also got a phone call to say that our new passports had arrived in Vera.

Richard and I took Muffin down to the beach for a walk in the afternoon while Penny unpacked. 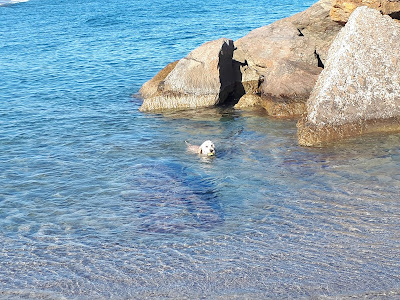 I cooked another lasagne for dinner.

The best-laid plans of mice and men often go awry!  Penny and I had planned to go to Turre market but discovered yesterday that today is Andalucía Day which means that most shops are closed and all the markets.   It would appear that restaurants seem to remain open.

We had had a call yesterday to say that our passports had arrived, so we drove over to Vera to collect them.  Muffin’s was also there, so we are all legal now and can go home at any time!

Penny and Jim needed a quiet day after their 4am start yesterday.  Penny had arranged assistance for Jim at Gatwick which worked like clockwork which was brilliant. 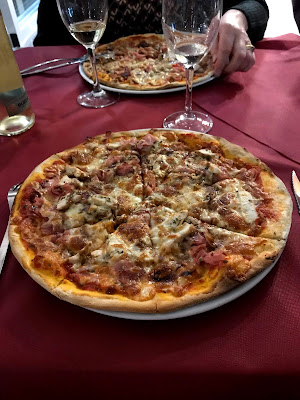 After a relaxing time, we went down to Levante for dinner.  The restaurant has been closed since we arrived and today was its first day.  Hmm I think they perhaps needed a little longer to get themselves organised.  The service was dreadful – I had to go and ask them to clear our main course plates after waiting for 20 minutes.  The food wasn’t brilliant either – we have been before but then it was lunchtime and the food was good.

Today was a shopping day.  We all went over to Vera to Iceland in the morning to stock up on the British things we can’t get locally.

In the afternoon Penny and I went to the Mercadona to stock up the rest of the food and drink!  The shop was very quiet which was a bonus. 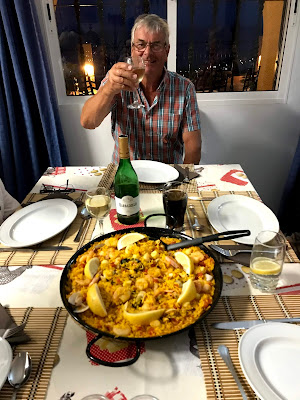 In the evening Liz and Phil came round for our annual paella!  I have to say that I love making paella and they do seem to be a success.  The first one I did last year was a nightmare but now it is so easy to make as long as everything is organised beforehand.  Everyone was sitting on the terrace and with the kitchen window open I could join in with the conversation!

Another quiet day though there was an unpleasant smell wafting around outside!  Penny and Jim went for a walk along Calle Francia and discovered that there was a drain leaking in the road and that was where the smell was coming from!  It would appear that every time we used water it would overflow down the road!  I phoned Stuart and asked if he could phone the necessary department in the morning to sort it out. 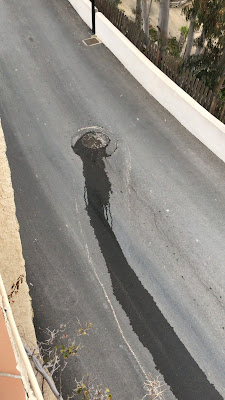