Stuart came up trumps today as the drain stopped overflowing.  We didn’t see anyone come and look at it or do anything, but the problem is over now!

We then took Muffin to be clipped in Garrucha.  We had 1½ hours before we had to pick him up so walked up to the marina and along to the end.  It was then lunchtime and we had quite a choice of places to eat.  As we had already tried two places this year, we decided on a new one, El Cafetin del Puerto.  It was an extremely windy day, but we chose a table in, what we thought, was a sheltered spot but had to move inside to eat otherwise all our food would have blown off the plates!  We definitely made the right decision as the wind got stronger and quite a few of the tables and chairs outside where blown over!  The food was excellent. 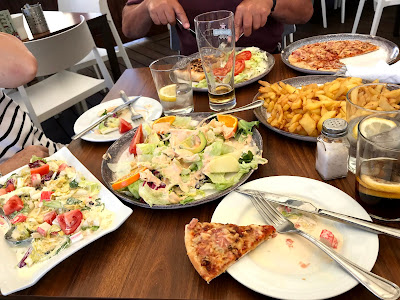 We picked Muffin up and he looks lovely.  His legs are shorter (well they can’t get much shorter shorter but the hair was clipped shorter) than usual but he looks just fine. 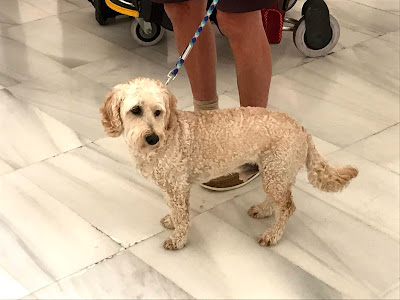 Before returning home, we went to Gelateria Italiana Alberto for icecream.  It had been closed over the winter and has just re-opened. 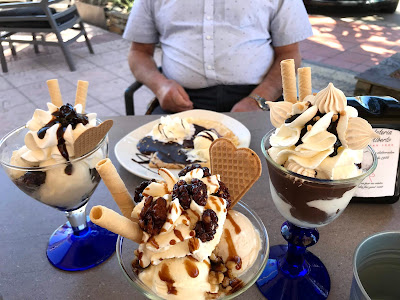 It was a nice sunny day – well most days have been sunny and warm/hot – so we decided to go to Carboneras.  This was our fourth visit but the first with good weather.  I have photos from previous years of us huddled up in coats!

We parked up and strolled to San Andrés Castle.  I went in on our first visit to Carboneras but Richard couldn’t go in as dogs aren’t allowed in so this time he went in with Penny and Jim while I stayed outside with Muffin. 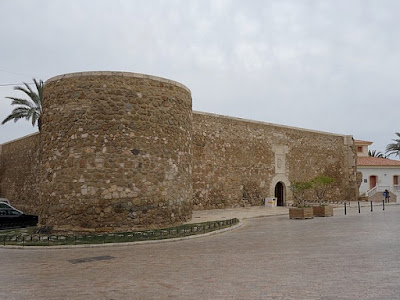 In 1559 Philip II of Spain handed the Carboneras area to the Marquess del Carpio with instructions to build a castle there. The Marquess however choose not to build one.  When the Moors were expelled in 1571 the area was left seriously unpopulated. The Berber and Barbary pirates then started raiding the Andalusian coasts for goods and slaves, so a string of watchtowers was built along the coast. When sighting a pirate ship the watchmen would alert the local towns; the woman and children would seek refuge and the men would rush to the coast to defend their town. The castle was finally built by Don Diego de Haro in 1577. At that time, it had one captain and 27 soldiers, whose families were the first inhabitants of the village of Carboneras.  In 1764 officials ordered the building of more fortifications in the area to fight the pirates. San Andrés Castle was at that time manned by one officer and 30 men.  In the early 20th century the castle was abandoned, and the town became almost uninhabited due to economic emigration. However, in the mid 1970s the town began found a new lease of life but sadly by this time the castle had become a ruin. In the early 21st century San Andrés Castle was restored. It now houses a small regional museum.

While I was waiting for the others Muffin and I found a nice park with two children’s play areas, a modern day amphitheatre and a lovely water feature. 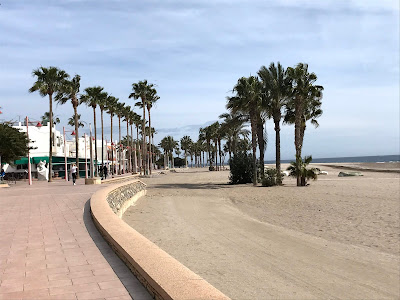 It would seem that Carboneras is very proud of its association with the film of Laurence of Arabia.  The town of' 'Aqaba' was built at Playa del Algarrobico and the attack on the train was filmed at Genovese Beach, San Jose. 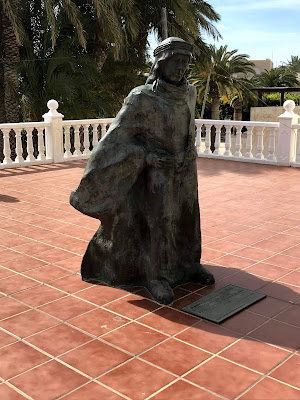 By this time is was lunchtime so we went off in search of food!  We found a nice café where we sat outside and had gambas and potato bravas.
We stopped for the regulation oohs and aahs and photos at the viewpoint. 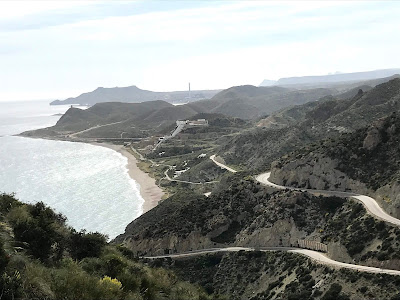 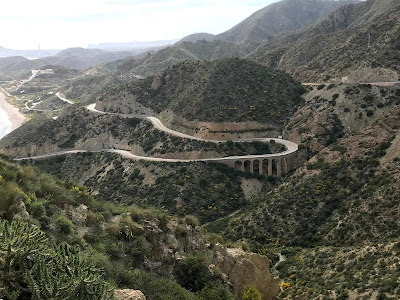 We went up to Almazara Castillo de Tabernas olive oil distillery.  We went last year with Ingrid and Bob and thought that Penny and Jim would like it too.  I had booked a tour but when we got there, there was a coach load of Brits and Americans which seem to take forever with their tasting.  We had left Muffin. In the car in the shade as he was fine until he saw us set off on our tour and then he started to yap.  In the end Richard forwent his tour and went and sat with Muffin. The rest of us enjoyed our tour and were lucky enough to see some bottling in action.  The whole process is over and done with in two months, October and November but to collect, sort, wash and crush the olives only takes 24 hours.  Even the stones are used – crushed and then used as fuel.  I use very little olive oil in my cooking, in fact I hardly use any oil at all, but I do enjoy the tasting especially one which is a mixture and has a lovely taste.  I didn’t buy any, but Penny did. 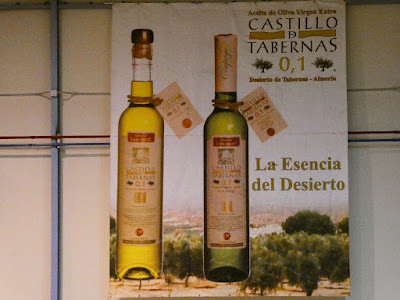 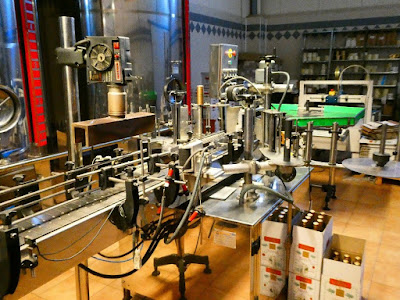 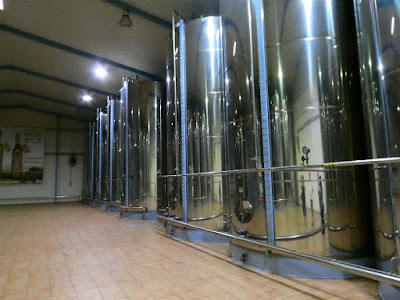 From Tabernas we headed towards Lubrin for some mountain climbing – well in the car!  We had taken a picnic and found a rather nice spot with a good view. 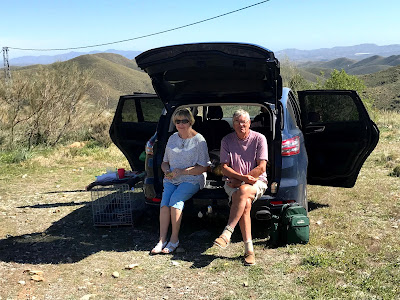 After our lunch we decided not to go to Lubrin and headed back to the villa.

Posted by Linda Gifford-Hull at 08:52