Richard had checked the rainfall radar again last night and he reckoned we needed to move about 8.30am and we were more or less spot on.

It was a bit grey going up to Culham Lock, but I did notice that some of the trees are already showing signs of turning – Autumn isn’t far away. The lock landing at Culham is split into two by Sutton Bridge and there was a hire boat moored on the first bit – right in the middle!  The lock said it was on self service, so I went up to get us through.  There was a large wide beam in the lock going up and I noticed a man sanitizing the lock console at the far end.  I assumed he was the Lock Keeper, but he didn’t have a life jacket on.  Of course, it was the Lock Keeper, who else would be sanitizing the console!  Culham Lock is quite violent so we tied up as far back in the lock as we could. 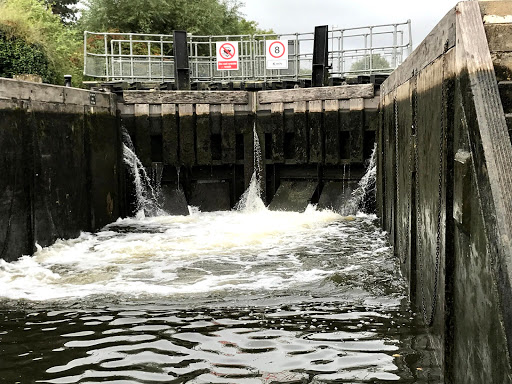 Did you know?  Culham is a 'shrunken village' - that is, it's much smaller today than its original size. It is a mystery why this happened. Suggestions include the Black Death and poor harvests following wet summers in the 14th century. (Thank you to Visit Thames.)

If anyone reading the blog post is on the Thames and thinking of going up through Culham Lock between Tuesday 1st September to Friday 2nd October, the lock will be closed from 9am to midday and 1pm to 5pm on Monday to Friday.  Surveys have highlighted that the bridge abutments are in need of repair works as water is washing out material from the abutments. If left without repair this would eventually weaken the bridge structure and lead to collapse.  In order to repair the abutments, divers will be working under the water to construct shuttering around the bridge abutments. As the bridge is very narrow it will not be possible for boats to pass whilst the divers are working in the water. Due to the nature of the works the divers will be moving in and out of the water during working hours. When there are no divers in the water it will be possible for boats to pass as directed by the site team.  There will be no work at weekends and therefore passage will be unrestricted on Saturdays and Sundays.

From Culham Lock it’s only a short hop into Abingdon.  We were quite early, 10am, so would we get a space.  There was one before the bridge, but the bank is very high there, so we don’t like it.  I wanted to be on the first stretch of mooring on Rye Meadow and believe it or not there was a space 😊  It is on a slight curve and the bow is out a bit, but that is just fine.  We are now ready for my son and his family to visit us on Sunday.

The rainfall radar said that the rain would come in about midday and it started at 11.37am!  It really was an afternoon of sunshine and showers, but when it did rain, boy did it rain! 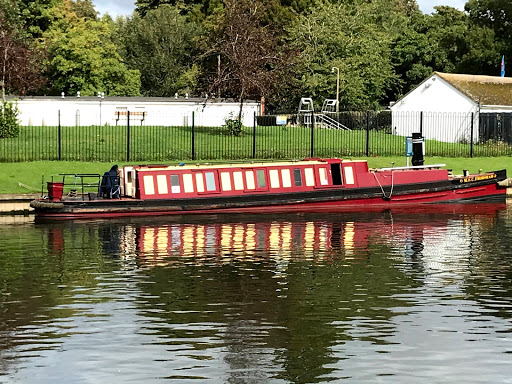 MSC Frodsham arrived opposite us during the afternoon.  I believe she is usually moored on the River Wey as we have seen her near to the junction with the Basingstoke Canal in the past.  She is a replica of a Bridgewater Canal tug. The original tugs, dating from the 1870s, were steam powered, and were converted to diesel in the 1920s when they were owned by the Manchester Ship Canal Company.

It was a very frustrating afternoon of Ancestry.  I have three great aunts that I just cannot trace the death’s of.  My great grandfather was one of 10 children and out of the 8 I have deaths for, only 3 of them lived to be more that 6.  How sad is that.

Posted by Linda Gifford-Hull at 10:15