We’ve got to dodge the rain over the next couple of days and with Richard being an avid rainfall radar user, we can usually do it.  This morning I was just thinking about getting out of bed when a shout came – we need to get going the rain is coming in earlier than anticipated!  We were away by about 8.45am.

It was a pleasant trip up to Benson Lock. Through Wallingford with masses of mooring space – typical when we don’t want to moor there!  There was a Lock Keeper on duty there. 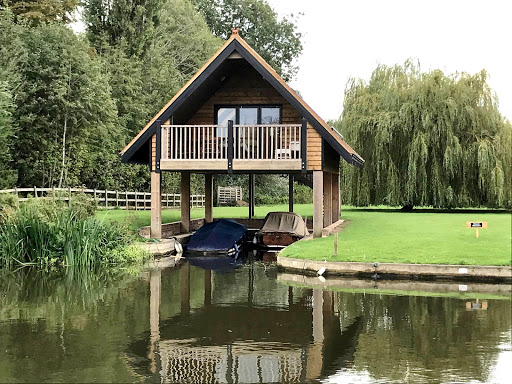 Up through Shillingford where the same wide beams that had been outside the hotel on our way down were still there.  I guess we can cross Shillingford off the mooring list.  Day’s Lock lock was on self-service and we went through the lock with another narrowboat and, as Richard calls them, a floating shed!  The hirers had picked it up at Shillingford Hotel and this was their first lock.  It looks to be very nice inside but steering it looks diabolical and, with a small outboard engine, it doesn’t go very fast! 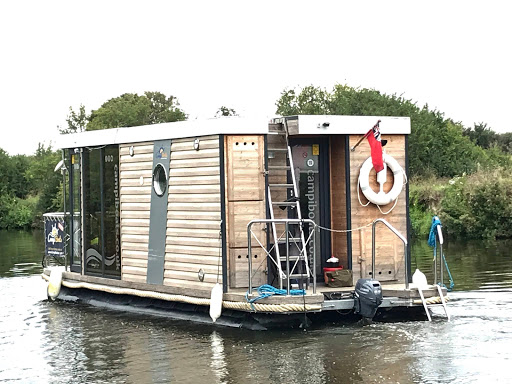 As we approached Clifton Lock there were a few spots of rain but nothing serious.  The lock was on self service and once again we shared it with the same narrowboat.  Our plan was to moor up on the 24 hour mooring above the lock if there was space, and there was.  Richard had just finished mooring up when the rain came down in torrents!  The rainfall radar was correct!

Just before Clifton Lock is the lovely Clifton Hampden Bridge.  It was designed by Sir George Gilbert Scott and opened in 1867. The bridge replaced a ferry service which had operated on the site since at least the early 14th century. From its opening a toll was payable, but this ceased in 1946 when the County Councils of Berkshire and Oxfordshire joined to buy the bridge from its private owners.  Originally the river at was rocky and shallow, with water levels often dropping to barely 2 feet so it was usually fordable by cattle and horses. The earliest record of a ferry is a mention of John Broun being ferryman in the early 14th century

The events that led to the building of the bridge started in August 1826 when the Lord Mayor of London made a ceremonial progress down the Thames from Oxford to London. The Mayoral barge grounded on the rocky outcrops in the shallows at Clifton Ferry and was stuck for several hours whilst the weirs further upstream were opened to raise the water level. This episode led to the building of Clifton Lock and weirs in 1835 which allowed better water management on the reach. Whilst the deeper channel was welcomed by river traffic it prevented the fording of the river by herds of cattle and thus prompted demands for a bridged crossing.

The bridge was built of red brick supplied from a kiln that Gibbs had built on Clifton Heath to service his other modernisations. Scott's design has six gothic arches with spans from 24 feet to 34 feet. The five brick piers have triangular cutwaters which extend upwards to provide pedestrian refuges. The total cost of the construction was £3,617 (equivalent to £323,000 today which was met by Gibbs, the unusually low tolls being levied only to meet the cost of ongoing maintenance. The bridge opened in 1867 with its builder, Richard Casey, as toll keeper.

In 1931 the bridge was nearly demolished as part of Berkshire County Council's policy of replacing toll bridges. New plans for a steel beam and trestle bridge were drawn up but the intervention of the Second World War put the plans on hold. In 1946 the Councils of Oxfordshire and Berkshire purchased the bridge from Lady Aldenham for £1,850 and decided to retain Scott's brick structure. On 4 October 1946 the bridge was made free, the first vehicle to cross being a fairground caravan.  It is now a Grade II* listed building.  (This is all taken from Wikipedia)

There is some very interesting history and photos on Where Thames Smooth Waters Glide.

I've been corrected over my facts on the ban on mooring at Beale Park.  It wasn't really anything to do with boaters and certainly not overstaying (I emailed the park to ask the reasons as have a number of others). It's almost entirely down to rubbish being left, which is mostly from people arriving by car, but Beale park can't prevent this, they can only prevent people arriving by boat. So that's what they have done, which is hoped to take a tiny bit of pressure off the rubbish situation as possibly a minority of boats have left rubbish (though they couldn't confirm this). Just would be a shame for boaters to spread rumours about other boaters spoiling a mooring when it wasn't the case here.  Thank you to Dave Whitfield for putting me right.
13.4 miles
3 locks

Posted by Linda Gifford-Hull at 10:29