I woke up at 5am as I heard a window hopper move, then I felt the boat rock, so I woke Richard up saying that there was someone on the boat!  Of course, there wasn’t anyone on the boat it was just the strong wind coming in.  With us sleeping at the front end and the river being a little shallow there, the wind was pushing us onto the river bed.  It did give me a shock though!

At 6am there were two women on the towpath chatting away and they woke me up.

At 7.30am Muffin decided it was time to get up – he never stirs until we do as a rule.  The wind must have disturbed him.

Richard woke up about 8.15am which is late for him but as we weren’t going anyway today it didn’t matter.

I’ve been watching the guy in the boat opposite us.  He is really intriguing as he hasn’t moved all day! 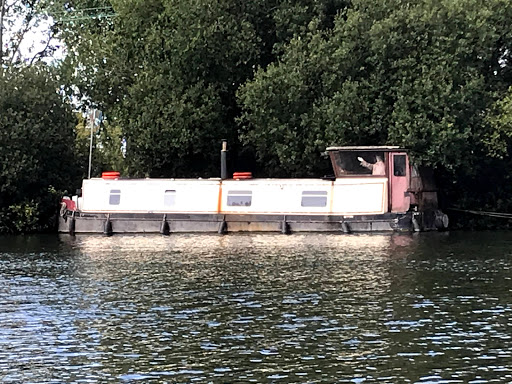 I was looking at the map this morning and saw that opposite where we are moored is a huge lake complex.  Part of it is the Redgrave Pinsent Rowing Lake.  The lake and its boathouse were specifically designed for training use, and provides training, medical, and scientific facilities for the GB rowing squad, and for Oxford University in preparation for the Boat Race. It was created by dredging and reclaiming part of Caversham Lakes which had originally resulted by gravel extraction. The project cost £13 million and was officially opened in April 2006.  The photo is courtesy of Webb Aviation. 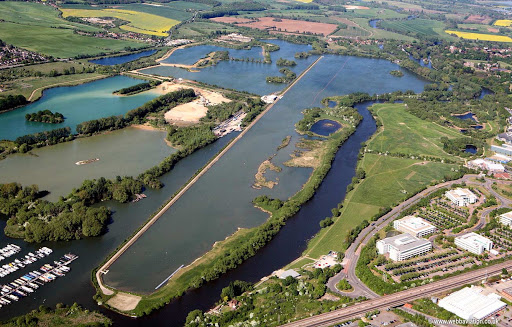 Caversham Lakes is also the home to The Thames and Kennet Marina, Reading Sailing Club and Isis Waterski Club where Princess Margaret and her husband Lord Snowdon waterskied during the 1960s.  A mine of useless information, aren’t I??

Sonning Lock was built by the Thames Navigation Commission in 1773 and it has been rebuilt three times since then. It was the highest upstream lock of the eight locks constructed after the navigation act of 1770. It was commissioned in 1771 but took two years to build.

Is there a spot more lovely than the rest,
By art improved, by nature truly blest?
A noble river at its base running,
It is a little village known as Sonning
Posted by Linda Gifford-Hull at 08:42