It was forecast to be a hot one, and it was – hot, sultry and ‘orrid!  I thought that we were only going a short distance, but Richard had other ideas!  I just wanted to find a big leafy tree and moor under it.

We stopped at Fenny Compton for water and then at the marina to dump rubbish.

After Fenny Compton is Fenny Tunnel which isn’t a tunnel at all!  The tunnel opened in 1776 and was 2.75m wide, 3.66m high and ran for a little over a kilometer. It wasn't very deep underground and had a number of wider sections to allow canal boats to pass each other. The Oxford Company bought the land over the tunnel in 1838 with the idea of opening it up. The first stage of this work started in 1838 and by 1840, they had removed several parts of the tunnel roof — a section at each end and a short section in the centre, creating two separate tunnels, one 307m long and the other 413m long.  In 1865, the decision was made to open out the rest of the tunnel. The southern end was open by 1868 and the northern by 1870. During the opening out works several bridges were constructed, including a cast iron roving bridge that carries the towpath across the canal, a bridge carrying the A423 Southam to Banbury road and a rectangular wrought iron trough (now demolished) carrying a stream that fed Wormleighton Reservoir. 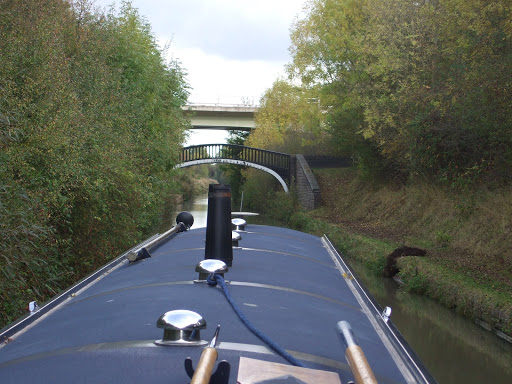 We finally stopped just short of Claydon Top Lock and moored up, under a nice leafy tree!  However, it was so hot and humid that it didn’t really seem to help.  We both sat out, Richard on the rear deck and me on the tow path, which wasn’t very wide.  I managed to catch up on all my blog reading before it started to rain a bit.

Our next job was to sort out the washing.  Not an onerous job I hear you say but yesterday’s washing was covered in white paper as Richard’s shorts still had his diary in the pocket.  The strange part is that there was still some pages and the little ribbon that marks the day, but the cover had gone completely!  We tried hoovering the clothes, then I found one of those sticky rollers which worked until the sticky paper ran out!  In desperation I pulled everything out of the cupboard where I keep “everything” and found one of those lint brushes which only go one way and that did the trick.  There are still small bits of paper but hopefully they will come off when the garment is worn!

We passed this boat just back along the canal.  I wonder how it gets under some of the bridges on this canal.  I can’t see any hinges that would let it down. 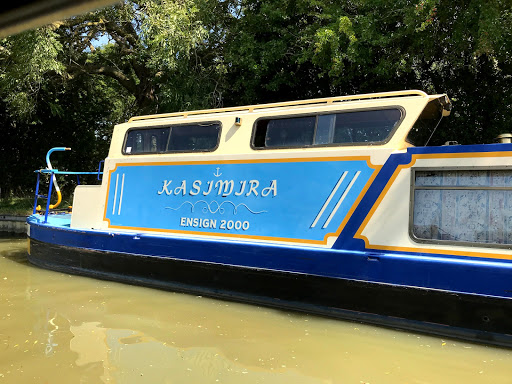 Posted by Linda Gifford-Hull at 11:00