Today was a day off. We had moved every day for the last 11 days. We were also expecting some visitors 😊

I was able to sit out about midday – chores to do before that, but it didn’t matter as it been quite grey up until then. But it was hot, so out came the sun umbrellas. I have one that fastens to my chair but it was quite breezy so I couldn’t get up in case the chair and umbrella flew away – I had visions of being like Dorothy from the Wizard of Oz with me, chair and umbrella being blown to somewhere mysterious! 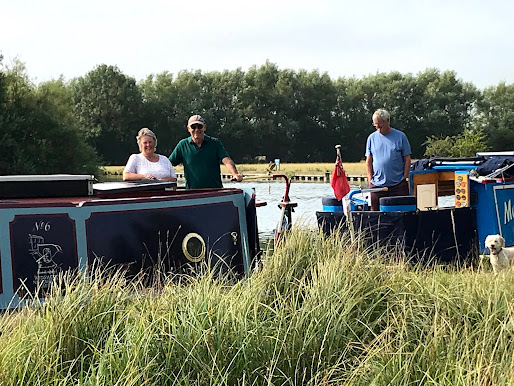 We had no sooner finished lunch when round the corner, coming downstream, was Festina Lente with Sue and Andy. It is always so nice to see them and we weren’t sure if was going to work out this year to see them but, for reasons I won’t go into (!), it did. We sat out talking with tea and water until the men couldn’t wait any longer and out came the beers. We had put a bottle of sparkling wine in the fridge as it is one of Sue’s favourite tipples, but she was on the wagon! Well not really, she just felt it was too hot to drink alcohol. It was such a shame that she didn’t want any as it meant I had to drink the whole bottle, but that was over about 4 hours.

We were joined quite late on by another boat. He was very close to us! The skipper came over and asked how Muffin was with cats as they had two on board. We explained that Muffin lives with a cat but when he saw them, I think he might have chased them but for two reasons. One they were on leads and secondly, I had hold of him! 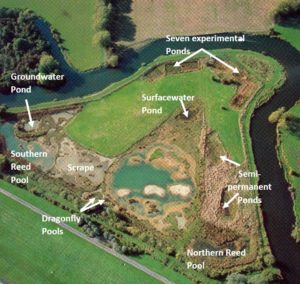 We have been moored opposite Pinkhill Meadown. The meadow is a 4 hectare area of wetland which, in 1990, Freshwater Habitats Trust along with the Environment Agency and Thames Water started the creation of a new pond complex to trial new ideas and concepts being developed around designing and digging new ponds. The project involved the excavation of 40 ponds in the meadow to create a clean water pond complex with pools of varying depth, size, permanence and water sources (both ground and surface-water fed). Unusually for a wetland creation site, the ponds were then continually monitored – yearly for the first decade and then at intervals right up to the present day. Results from these surveys show that Pinkhill is exceptionally rich in wetland plants – in fact its richness has only stabilised recently, plateauing at around 70 plant species. Invertebrates too show a similar level of richness. This makes Pinkhill Meadow probably the most monitored pond creation site in Europe (and perhaps anywhere).
As I am a bit short of photos today, I thought I would add this one. I think it was in Cropredy. 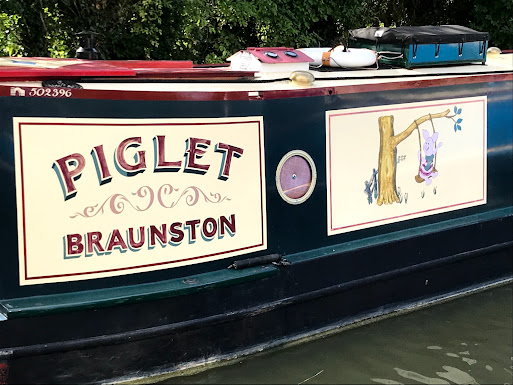