Both Festina Lente and Mary H were ready to depart about 10am. The sad part is that they were going downstream and onto the South Oxford while we were going upstream. We said our “elbow bump” goodbyes. I wonder if either couple will get to Spain next year. We both have properties booked but who knows if we will get there. It’s always sad when we say goodbye to people but at least today we were having more visitors. 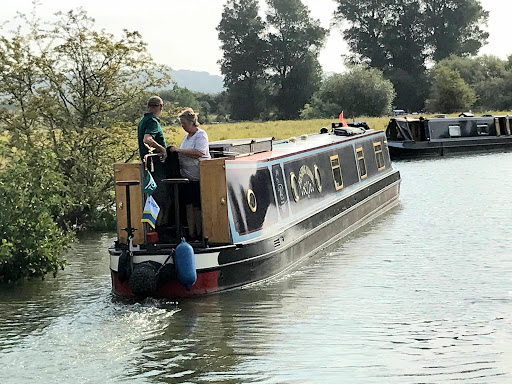 I was down below as Richard pulled away. There was a sound of reversing and I wondered what on earth was going on so quickly went up on deck – Muffin was still on the bank looking very worried!

We went upstream to just after Bablock Hythe and then turned around. I had washing to do, and a bit of ironing so needed to keep the batteries topped up.

We stopped at Bablock Hythe for coffee and were just thinking about lunch when I discovered that our visitors were going to be at Swinford Bridge at 2pm. A quick untie and back down the river. 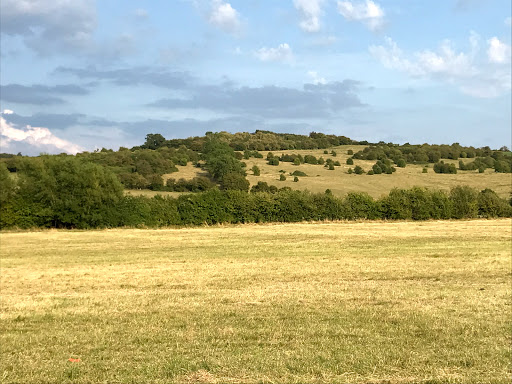 I got the iron and ironing board out, ironed one item and the iron gave out! (Update on the iron, Richard has checked it out and there is nothing wrong with it so goodness only knows what was going on!)

A quick hoover through and we arrived at Pinkhill Lock. After my last experience I volunteered to do the lock but not act as Lock Keeper! I’m sorry but I saw two boats up and two down which included Mary H. The other boats were complete Numpties! Coming up was an Anglo Welsh hire boat which had been picked up minutes before and the crew had no idea what to do, so I suppose I shouldn’t call them numpties, but they didn’t ask for help. The other boat, a yogurt pot, fiddled around asking if there was room for them in the lock – they were only about 26 feet. They really had no idea what they were doing either so I guess the boat must be new to them. I had to ask for some help with the lock. The hire boat man helped, and I was at least able to instruct him how to operate the lock which is more than Anglo Welsh seemed to have done. Coming down was Mary H and another rather tatty narrow boat with two women on board. I got Mary H settled, shut the gate and went to open the bottom paddles only the narrowboat crew were fiddling out – it had to be their first lock too – either that or they were real Numpties. Fortunately, there was a motor cruiser also waiting to come down and the chap from that closed the top gate and helped at the bottom, he then said that I could get aboard. I was very grateful as it was so hot, and I really needed to calm down after all that.

Before we knew where we were, we had arrived at Swinford Bridge. So now to our visitors. My sister, Penny and brother-in-law Jim, are staying in an Airbnb at Swinford Manor Farm and we have been fortunate to get one of the farm’s moorings for 4 nights. The plan, weather permitting, is to go down river tomorrow, then upriver on Wednesday. The forecast is dire for Thursday so we may well go out somewhere in the car.

Penny and Jim arrived about 4pm – the hottest part of the day. They had already unpacked the car into their cottage, so they came down to the boat and had a cup of tea. It was so hot on our mooring as there was no breeze, so Richard suggested that we go up river a bit to a meadow where we had moored a couple of times before. It was certainly breezier there. Penny had bought a bolognaise, so we had that sitting out on the bank before heading back to our mooring. There are cattle on the meadow including a rather large bull. They walked passed us but didn’t even cast us a second look! 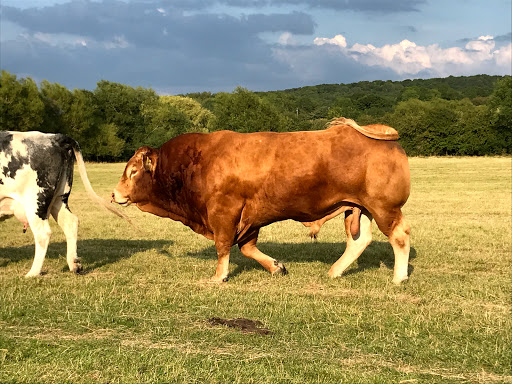 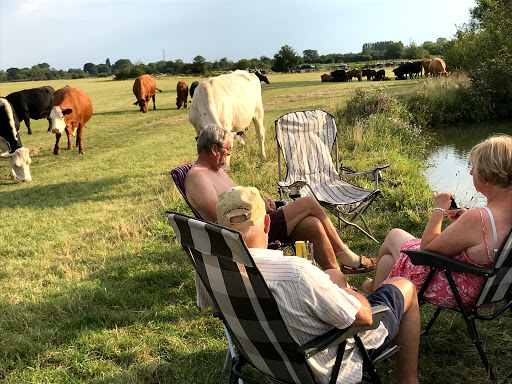 Penny and Jim went back to their cottage and left poor Freddie (their dog) with us – well not really poor Freddie as he doesn’t mind staying with us and Muffin.