We wanted to get going early this morning as the weather forecast said a nice morning but a wet afternoon.

We were away at 8.15am. Culham Lock was on self service but there was a boat coming out, so we were able to go straight in. 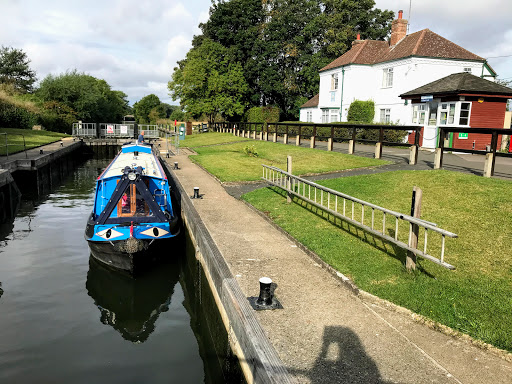 Before Shillingford Bridge is my favourite house on the Thames. Shillingford Court. The house is split into three parts and the right hand end has been for sale (it now has a sold sign on it). When I win the lottery, we are going to buy one of the parts, or maybe we will buy the whole thing depending on much I win! They were asking £1.5 million for part that was for sale! 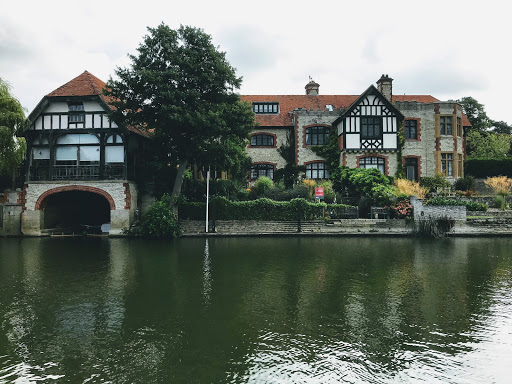 Built in 1898 by Frederick William Mortimer, tailor to the Prince of Wales, later King Edward VII. Shillingford Court sits on the site of an old Wharf on the banks of the river Thames. It is said that due to the closeness of then Edward and Mortimer, over the years the Prince visited the house with his mistress, Lillie Langtry. When the house was constructed Mortimer had both his initials (FWM) and his wife’s (JDM) inscribed in the front door hinge, drain hoppers and the grand staircase. The house was subsequently split into its current form. Tailors is the largest dwelling within Shillingford Court, and has elegant, interesting rooms featuring ornate panelling and high ceilings typical of the era. That will do me nicely!

There was actually a Lock Keeper at Benson Lock and look what came out when the gates opened! It appeared to be quite difficult to steer! 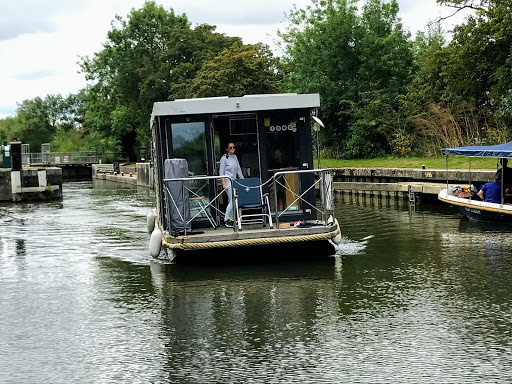 We shared Benson Lock with a very attractive open day boat with, what looked like, an extended family on board. They were laughing and having a lovely time, but as we dropped down the lock their laughter echoed around! Have you ever been in the bottom of a lock when someone opens a bottle of bubbly? It’s very noisy!

Of course, there was no room in Wallingford, so we cruised on through which I was very pleased about as we have found a lovely mooring in the middle of nowhere. The Thames Path goes by, but we are low down, and no one can see in. I’m keeping quiet about our exact location so that we can use it again!

I spent the afternoon on Ancestry. I got back to my fourth great grandfather on my maternal grandmother’s side. I am only following the male line as otherwise there will be no end at all, maybe one day I can revisit the female lines 😀