I slept really well last night thank goodness but have a heavy head this morning – too much sleep now!

Yesterday I said how I had been to Morrisons for goodies for our visitors coming, well this morning I got a phone call to say that they are now not able to make it. Goodness only knows what I am going to do with all the food especially as the freezer is still quite full!

We stayed in Banbury for the morning as a friend was going to try and help me remotely with my laptop. I reckon he must have tried for almost two hours before he had to admit defeat ☹ We will start again once I am home as he is talking about a factory reset. The laptop is working other than the Com Port and the Windows update problems so I will continue as things are for the time being.

We left Banbury after lunch heading to Cropredy for the night. At the first three locks there were boats moored up on the lock landing. The least awkwardly moored one was a hire boat! Just before Slat Mill Lock the chap on a boat which was coming passed us said that the next pound was low. When we got up there, we discovered why – the bullocks were drinking it all! 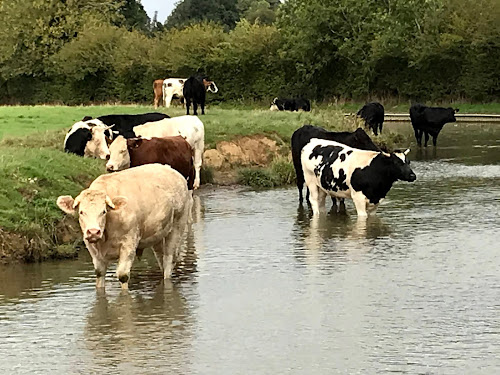 We stopped at the services at Cropredy as they are the last before Napton (except for water). Up through the lock and we made the decision to continue on through the next three locks as it was only 4pm and the sun was shining.

The Battle of Cropredy Bridge was on 29th June 1644, during the First English Civil War. The battle was between King Charles and the Parliamentarian army, led by Sir William Waller. There was no real victor as the Royalists slipped away under the cover of night when they received intelligence of additional Parliamentarians nearby. They were also low in food and supplies. While the Royalists had suffered few casualties, Waller had lost 700 men, many having deserted immediately after the battle.

The new basin at Cropredy Marina is pretty well dug out now. It is going to be huge. Rumour has it that Castle Marinas, who own Cropredy Marina, are going to be running some Black Prince Hire Boats from there, as they own them too. 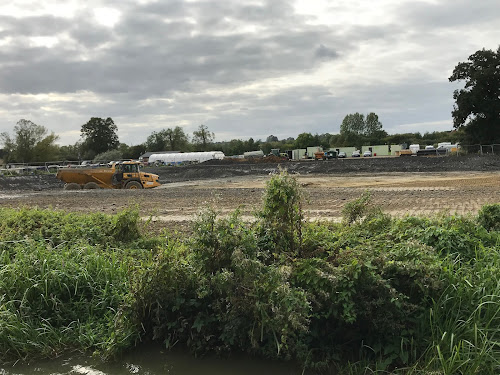 We had stopped just north of Clattercote Wharf on the way down the Oxford Canal and we thought that we would stop there again today, but it all looks different going the other way, so we continued on to the long stretch of mooring below Claydon Bottom Lock.

In the 12th century Robert de Chesney, Bishop of Lincoln granted land at Clattercote to the Gilbertine Order, on which they founded a small priory dedicated to Saint Leonard. The Priory seems to have had a leper's pool in which leprous inmates were bathed. By the 18th century the leper's pool was known as the "great fish pond". So where is this leading? Well, in 1777 when the Oxford Canal was being extended southwards past Clattercote from Fenny Compton the canal company enlarged the great fish pond to form Clattercote Reservoir to feed the canal. For goodness sake don’t fall in the canal around here!