We have three days of three to four hours (lock dependant) ahead of us before we get back to the marina on Sunday. Today we had the Claydon flight to do.

We left our mooring at 9.45am and it was only a hop, skip and a jump to the first lock. There was a boat already in the lock owned by a young Spanish couple, so I helped them through and set the lock for Mary H. As she was rising another boat came up behind us, so he finished seeing Richard through. I walked up to the second lock and again helped el barco through (my Spanish has improved today!) At the third (middle) lock there was a volockie on, but we had to wait for a boat coming down. When we came down the canal at the beginning of August I noticed the vegetable garden, so asked how it was doing only to be told that C&RT have said that they can’t have a vegetable garden there as there are too many pipes under the ground that could get damaged by digging – what a shame. We were only the fifth boat to pass through the middle lock today – there had been 31 yesterday and a few weeks ago the daily average was well over 40. The fourth lock was pretty straight forward though all the locks were against us today. As we left the fourth lock there was another boat was coming down. It was an interesting boat as it had a butty fastened to it. I got chatting to the owner who said that he had made the butty and used it as his shed! The boat and butty measure 70 feet so no problems in locks. The chap made me smile as he said that sometimes he tells people that he has three ex-wives in the butty, and during lockdown he was telling people it was full of toilet rolls! El barco got stuck getting into the top lock as he had fenders down and it is obviously a fairly narrow lock. Coming down was Dusty the coal boat. We finally came out of the top lock at 11.15am. 1½ hours, I don’t think that was too bad. 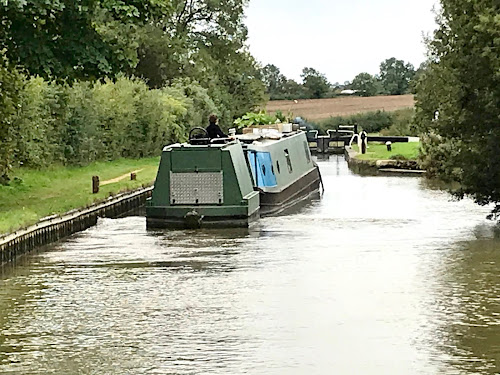 We met another boat coming the other way and the narrowest point of the Fenny Compton “tunnel”. Of course, we both politely waited for the other to move, eventually the other boat moved first! 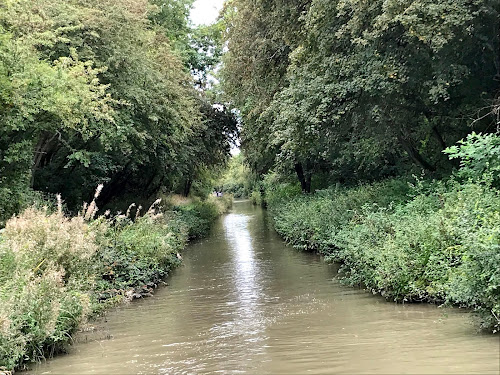 It was rather slow progress through Fenny Compton as there were lots of moored boats. We pulled over just before Ladder Bridge (128) and found ourselves a gap in the hedge so we have a view. 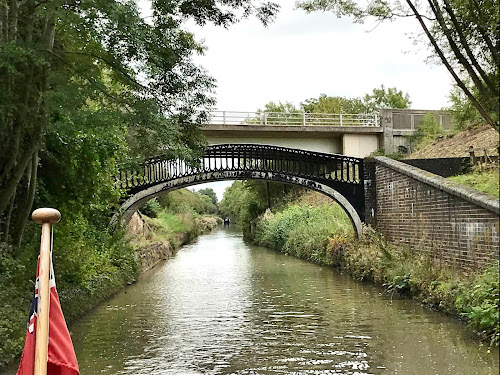 We had a visitor today – a blog reader, Julie. She had reckoned that we would probably pass them today but in fact we have moored behind them, well not that close as we can’t see them! Nice to see you Julie 😊

In 1498 Sir William Cope Who served as Cofferer of the Household of Henry VII from 1494 to 1505. 1498 he was granted the Lordships of Wormleighton and Fenny Compton, part of the lands of Simon de Montford who had been attainted in 1495. He later sold the lands to the Spencer family, later of Althorp. In case you don’t know what a Cofferer was it was a Treasurer. I didn’t know and had to look it up but that must be where the word coffers comes from! The name Fenny Compton comes from the Anglo-Saxon Fennig Cumbtūn meaning "marshy farmstead in a valley".