Another sunny start.  Muffin and I walked to the stop lock as I wanted to try out my new video camera.  There was a short queue which is strange as there are hardly any boats out and about.  I videoed Richard coming into the lock and then again as he negotiated the turn and reversed to empty the loo and rubbish.  This photo is a still taken from the video – ooooooo!! 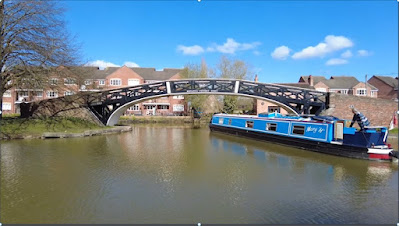 After the dumping we topped up with water.  We’ve been watching the Foxes Afloat vlogs and are amazed at how they can make a tank of water last 2 weeks!!  This trip I am noticing just how extravagant we are with water – we would never have lasted during the lockdowns without being very close to a water point!

We pulled over for lunch just before charity dock.  I think Snow White is new since we were last this way but much of it is looking rather sad.  From the internet I understand it's called Charity Dock because the land was owned by the Church Commissioners and apparently, so the story goes, it is owned by 2 brothers who fell out, one wanted to sell but the other didn’t, so it is now the most rundown and strange dock on the canals.  If anyone has more information, I would love to hear it. 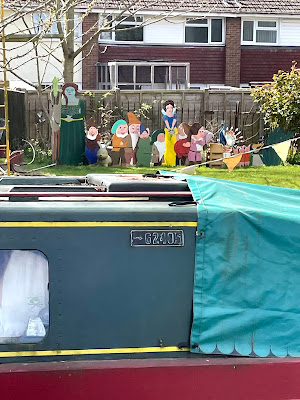 Marston Junction is just on from Charity Dock – I always love turning on to a new canal, even though most of them we have done before.  Marston junction was built in 1804 at the end of the Ashby de la Zouche Canal (now the Ashby).  As you turn onto the canal you can see where the original stop lock was situated. 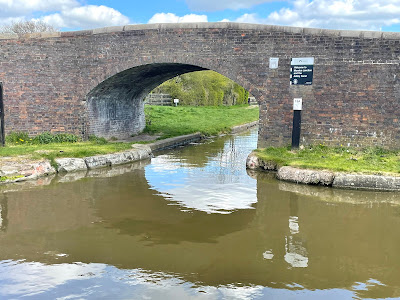 My afternoon was spent, before and after mooring up, trying to edit my video from this morning.  I have bought Adobe Premiere Elements 2021 and sadly, most of it is beyond me ☹  I am determined to master it though and would like to do it before I get home.  I say that as my future son-in-law, James, is a computer whiz and I know he will show me but I would like to do it myself.

This photo shows the state of the water where we moored.  I guess there must have been some towpath clearing somewhere. 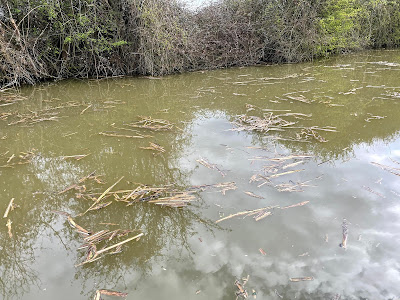