An early start (for us) in lovely sunshine.  We had 13 locks to do which turned out to be 16, but more of that later.  The photo below is Locks 23 which was below where we had been moored – such a lovely scene. 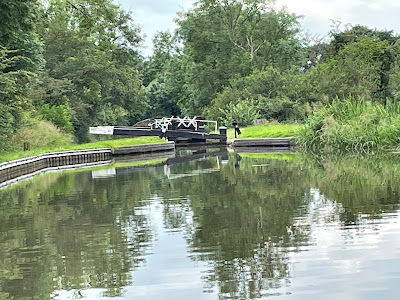 The locks we had to do today were busy with boats going up and down the locks which come pretty close together.  As Richard had done all the locks on the Grand Union, I felt that it was my turn today!  I got one ride between locks but other than that I walked.  My iPhone app said it was 3.2 miles.  We had a hire boat breathing down our necks, but it didn’t matter.  They had an electrical problem. The engine wouldn’t start as the starter motor was dead, so they put a screwdriver across the terminals of the solenoid and got one terrific shock even though the screwdriver was insulated.  They then tried again wrapping the screwdriver in a rubber glove and the engine started.  They were meeting an engineer at lock 40 and were so eager to get to meet the engineer that one of them helped us down each lock.  I missed them when they had stopped!

The bottom Lapworth lock is almost under the M40.  It’s a little noisy but I just love the comparison of the rushing traffic on the motorway and the narrowboats gently cruising along on the canal. 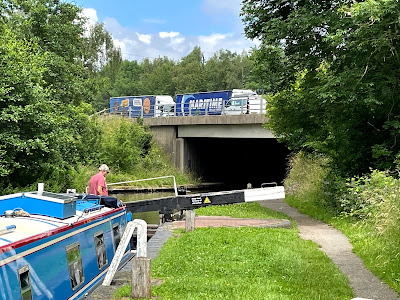 We stopped at the services at Lowsonford to fill up with water and get rid of the rubbish.  Richard had walked up to the Lapworth services with a cassette before we left this morning.  You might like to note that we did NOT stop to go to the Fleur de Lys pub!

At lock 31 there is one of the barrel cottages which is now a holiday cottage and let by the Landmark Trust.  I think it is the prettiest of them all. 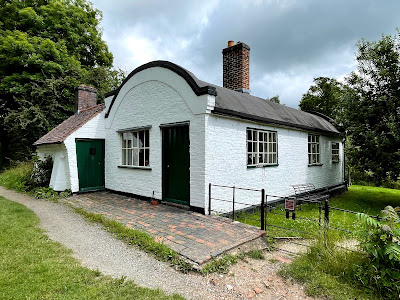 Yarningdale aqueduct is the first of three aqueducts on this stretch of the canal.  Wikipedia says 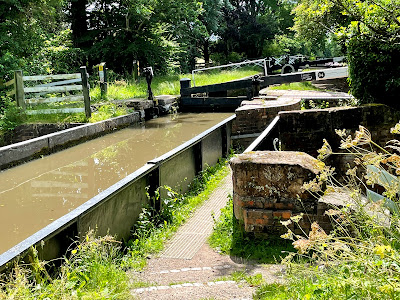 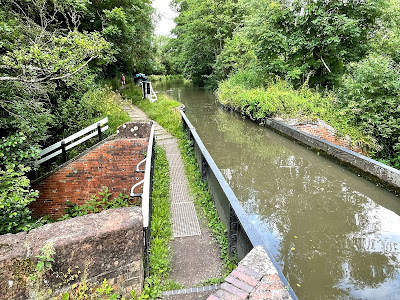 It spans the Kingswood Brook near the village of Claverdon. All three aqueducts are unusual in that the towpaths are at the level of the canal bottom.  Originally built between 1812 and 1816 as a wooden structure, the aqueduct is a single-berth navigation over a local stream and is approximately 42 feet long. It leads into the 34th lock – "Bucket Lock" – on the canal, the middle of a three-lock flight in the Claverdon area.  In 1834, the aqueduct was destroyed by flooding of the two waterways, caused by a surge from the nearby Grand Union Canal. It was rebuilt in cast iron the same year by Horseley Ironworks.

We had planned to stop before the Preston Bagot top lock, but I was being fussy and couldn’t find anywhere I liked.  When it is lovely weather, I like to get my chair out and sit on the towpath, so it needs to be wide so walkers can get passed.  We carried on down the Preston Bagot three locks and finally found somewhere just before the Anglo Welsh depot at Wootton Wawen.  It was a lovely spot though there were other boats moored up.  We sat out for so long with a glass (or two) of wine that we ended up with having beans on toast with a fried egg for dinner!