Guess what?  It was another hot day ☹ though it seemed to be a cooler night.

We were just preparing to leave when a narrowboat came down, so we were able to share today’s three locks with them.  Spirit on the Water had been moored behind us in Stratford on Saturday and I had thought what a lovely colour, or should I say colours, she is.  It turns out that the owners have only had her 6 months and decided in lock down to get her painted.  Originally, she was going to be 2 tone grey – I’m so glad they changed their minds. 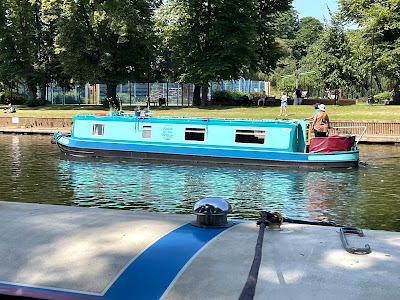 At Evesham Lock I was watching the Canada Geese standing on the weir pecking at the weed, I just had to laugh as the water sprayed up from their heads. 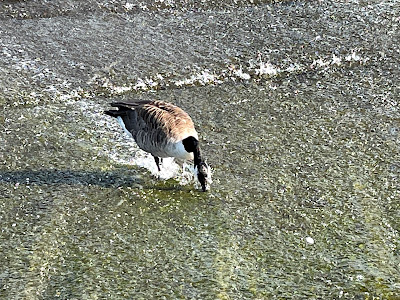 After Evesham Lock I had to take the obligatory photo of the lock keepers house over the water.  When we first came down onto the Avon there was one living there and he did the lock, but that is long gone. 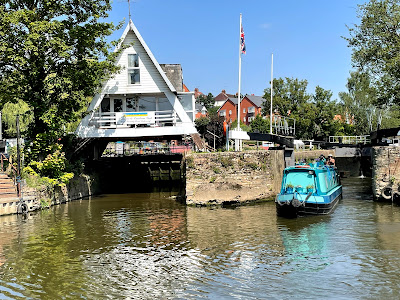 We moored up in Evesham while Spirit on the Water went to her home mooring just down the river at the bottom of the owners’ garden – jealous!!

We walked up into town to pick up my prescription – more of that in a minute and get some food.  There always used to be a small Co-op (I think) but as I wasn’t too sure where it was, I had a look on Google Maps and discovered that there is now a Waitrose, so we doubled back on ourselves and found it.  It was so hot, but we plodded on.  I was looking forward to the air conditioning of Waitrose, but Richard was worried that there might not be a seat in the shade.  He needn’t have worried as there was one right outside the shop.  There was also a dog bowl and a tap which Muffin was shoved under to cool off.  Muffin has a cool jacket for the boat, but I never thought about him wearing it out for a walk.  I did the shopping then discovered that there is a short cut through the car park, down an alley and out onto the High Street.  We wanted an ice cream but couldn’t find a shop so in the end we sat outside a café and had a coke. 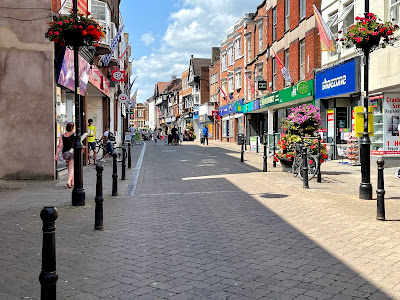 We had a quiet afternoon, sitting out in Workman’s Gardens under the trees.  We watched children playing opposite on the pontoon.  There are signs everywhere saying no swimming, but they were only paddling.  At the side of the river, it only came up to their thighs!  Behind us in the Gardens were a crowd of people playing on a concrete table tennis table and also playing football – well kicking a football around!

A Virgin balloon took off from the meadow across the river – what a wonderful night for a flight. 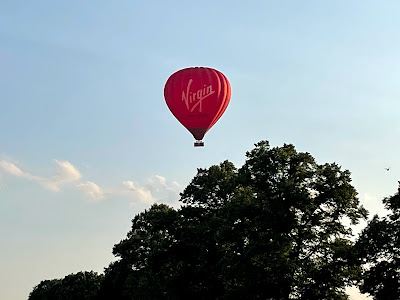 We sat out quite late then I decided to try and watch TV.  Where we were moored the internet was dire and the TV signal almost non-existent.  I tried to stream Holby City but got fed up with it buffering all the time.  Try as I might I could not get my Amazon Firestick to connect to my phone.

So back to the prescription saga.  On Monday my doctor’s surgery said that they would send my prescription to a pharmacy in Evesham.  Guess what – they hadn’t!  There was a young lad there who went above and beyond to help me.  Fortunately, I had my NHS number with me – thanks to the pharmacist in Stratford who said it was always worth carrying it with you – so the lad, Tom, looked me up and the prescription had gone to Pharmacy2U AGAIN!!  Tom rang Pharmacy2U and got them to send the prescription on to them.  He suggested that we go and do some shopping and when the electronic prescription arrived he would ring me.  Well, I got the phone call in Waitrose and was told that they had the prescription, but they needed to order in the pills.  Will I ever get them???

Posted by Linda Gifford-Hull at 13:13