We had a visitor coming today so it was a quick tidy up and a hoover through.  It’s been far to hot to worry about housework and, anyway, we have sat outside most of the time.

James (that’s not my future son-in-law James or Richard’s son James, it’s another James!) arrived spot on time and we had a coffee before setting off up the river to Offenham for lunch.

We were joined in Evesham Lock by a pink narrowboat called Imagine.  They were going to The Bridge Inn and Ferry for lunch.  It was the first lock that we had gone up as we had been going down, and I had forgotten just how violent some of the locks can be. 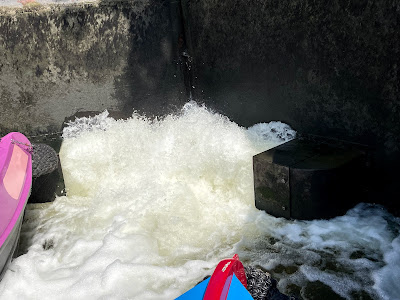 Up through Offenham Lock to the moorings, where we were the only boat.  We made camp under a weeping willow by the lock, well three chairs and two small tables.  We had a drink and nibbles then our lunch.  Originally, we had planned to do a barbecue, but it was far too hot to cook over an open fire in the middle of the day.  Quiche and salad had to suffice!  James had brought Yumyums, which we had never had before, so we had those followed by lemon tart and cream!  A mere feast! 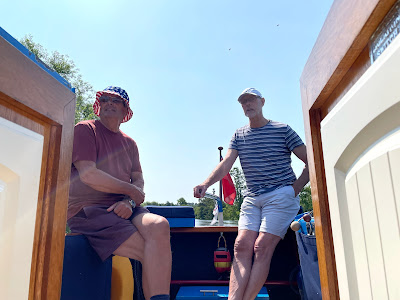 While we were sitting under the tree a lady came up in a golf cart, we had seen her before.  She said that we were on private property.  James sweet talked her into letting us stay 😊  It’s a crazy situation as she said that the bank is owned by the Avon Navigation Trust but that the rest of the land belongs to her.  There are no signs so how on earth are you supposed to know?  A hire boat moored up opposite us and got a sun umbrella out and some rugs and were sitting minding their own business on the top of the bank and she shooed them off ☹  When we left she was making her second trip down and was talking to a couple of boys who were walking across HER land to go swimming in the river.  It’s a very silly situation.

There were two boats waiting to go into Evesham Lock but when they got in, they realised that one was 70 feet long and didn’t really fit in with the second boat.  There was a Trust lady there, thank goodness, who said that they could do it, but slowly.  They got down OK but getting them out was a different story as they were stuck behind the gate.  A few manoeuvres and they squeezed past the gate!

We moored up in Evesham again and we said goodbye to James.  It had been lovely to see him again. 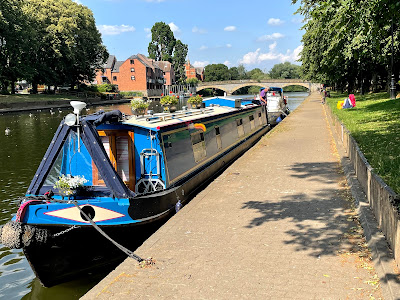 We didn’t need anything to eat as we had eaten so much at lunchtime, and we sat out until 10pm playing games on our tablets!!

I completely forgot to take any photos of our lunch under the weeping willow – such a shame,

Posted by Linda Gifford-Hull at 10:43