I wandered up into town before 9am.  It was rather surreal as I felt that I could so easily be in France.  Workman’s Gardens looks, well to me anyway, very French.  There were some men playing boules (well maybe they weren’t but I need you to get into the French mood).  As I walked up Bridge Street, the shops were just opening and there were people sitting outside cafes drinking coffee.  I guess you would have had to be there to understand what on earth I am on about!! 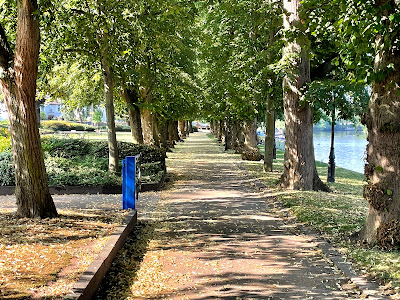 SUCCESS – I have got my pills, but I’m afraid that it is not thanks to my surgery ☹  However, it wasn’t success getting a parcel from an Amazon Locker.  The locker was inside a Mace shop which should have opened at 8.30am but wasn’t at 9.10am.  I phoned them and there was no answer – another shop hit by Covid or did they just oversleep!

As I walked back to the boat I met my cousin, Simon, who was just arriving at the same time as me.  He is a very keen rower and had been out rowing at 7am (is there such a time??)  He rows out of Evesham Rowing Club which is just opposite to where we were moored.   He had come for coffee.  I hope we will be able to see more of him and Deb over the next week.

We had two locks to go as our destination was Wyre Lock.  We shared Chadbury Lock with a small dory/punt with a piece of plastic as a canopy.  Two lads were with it plus a barbecue, goodness knows where they were going. 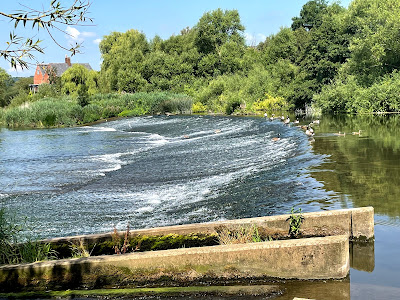 At Fladbury Lock there was a boat coming up.  I was planning on doing the lock but couldn’t even get the paddle started so Richard had to take over.  One of my favourite scenes on the waterways is looking at Fladbury Mill from below the weir, however it is so overgrown now that you can’t really see it.  Very sad.

We passed by Wyre Piddle, so called as it sits on the Piddle Brook!  Apparently the Pershore Rugby Club play at Piddle Park.  My Pearson’s guide says “cue for much ribaldry from visiting teams”!

There is good mooring at Wyre lock but the Trust have got a multitude of their boats moored there so now there is only room for 2 boats ☹  However, we only needed one mooring and that was on the lock side of the island so that when the sun goes round it will be behind the trees.  We tied up and I was a happy bunny. 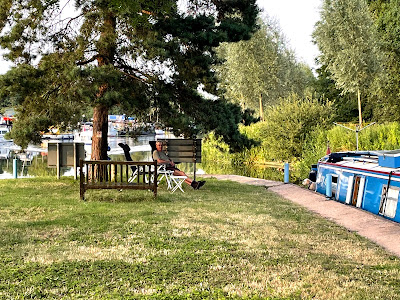 We sat out on our desert island watching the odd boat go down through the diamond shaped lock.  Apparently, many of the original locks were diamond shaped built like this to reduce erosion by the force of water from the sluices.  On the South Oxford Canal there are two diamond shaped locks at either end of the River Cherwell, I always thought these were that shape to pass the same amount of water as the 'standard' locks to keep the pounds topped up. 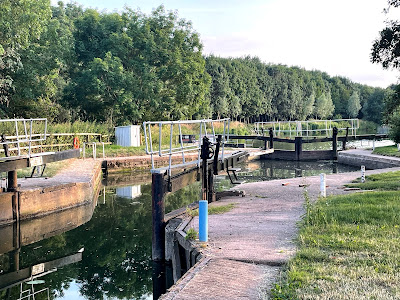 We sat out until about 8.30pm then went down below to watch some TV, well streaming anyway.  About 9.30pm we heard an outboard motor and a motor cruiser came and moored up on the other side of OUR island!  It was pretty dark – rather him than me cruising the river in the dark.

Posted by Linda Gifford-Hull at 12:14