We left our desert island and went down Wyre Lock and then the mile to Pershore.  We filled up with water and dumped the dumpables before mooring up under the weeping willow trees.  Richard went off to empty an elsan cassette.  He could see it needed a key so picked up a C&RT one and went off.  He came back sheepishly as he had picked up the dog’s lead and not the key! 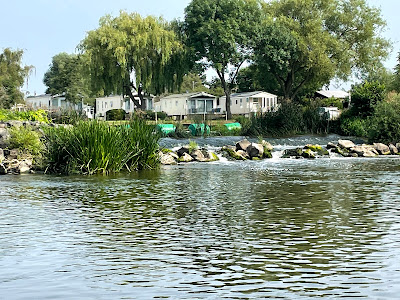 It started off as a nice cool day – only 27°C, before it clouded over and became quite a bit colder, but still in the 20s.  It’s amazing how quickly one becomes acclimatised to the heat.

Wyre Mill has a history dating back over 1000 years and was owned by the Abbot of Pershore. The Mill ceased trading in 1948 and in November 1953, C.D. Barwell OBE, purchased the freehold with the aim of forming a social club. In 1954, G. W Matthews became the first Club Secretary and a few years later in 1961 the Lower Avon Navigation Trust bought the Mill, and the Club was incorporated as a limited company, with a vibrant dinghy sailing section. In 1982 Club Members purchased the lease and became independent. Today Wyre Mill Club is a non-profit making organization run by the Members for the Members, through an elected Committee, who are volunteers. 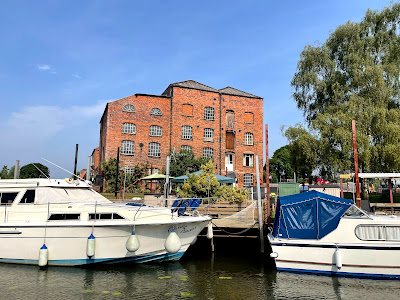 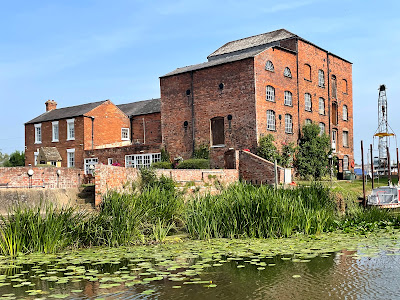 The mooring at Pershore in on a park and just across the park is an Asda store.  Not the largest one by any means but it had almost everything I wanted.  Richard went off into the town exploring a hardware shop and a tool shop – both dog friendly 😊

That was about the limit of our day – other than sitting out under the weeping willows reading and watching several paddle board classes.  The school is just down from us so they would go upriver, nervous and scared and then come back quite proficient.  It was so funny listening to them falling in and thoroughly enjoying the experience!

Yesterday I mentioned the diamond shaped Wyre Lock and found the following on a website called canaworld.net.  Very interesting.

You need to bear in mind that the Avon was one of the earliest rivers to be made navigable (as a result of an "Order in Council" and Letters Patent) in 1635 and was reported to be navigable to within four miles of Warwick by 1639.

It's claimed to be the first river to be made navigable by means of pound locks, although pound locks had been built on other navigations before this date.

It is reasonable to suppose that they were turf-sided, and thus may not have kept their original shape in the intervening (almost) 400 years since they were built.

In the case of Wyre, the strong stream across the downstream lock approach created by the weir would make an unpowered craft difficult to control.

Certainly today, some powered craft have difficulty with the lock entrance, so it's not difficult to imagine a large, unpowered barge passing through the gates on a diagonal course and knocking lumps out of the soft sides of the lock.

It is believed locally that the diamond shaped locks were built in an effort to reduce erosion of their earth sides by water from the top paddles when they were opened.

There were diamond-shaped locks at Pershore, Wyre, Chadbury, Evesham, Cleeve and Stratford.

The lock at Stratford was later replaced with a pair of diamond-shaped staircase locks.

There was a navigation weir (flash lock) just below Bidford Bridge.

There were watergates at Cropthorne and Pershore.

The rest of the locks were rectangular.

Cleeve lock had paddles and rimers instead of top gates, while Harvington Lower Lock had a single, approx 12' wide, head gate.

Posted by Linda Gifford-Hull at 10:27